Dreamfall is a solid adventure game that with a story that should be experienced. However, puzzle fans may be dissapointed.

You do not need to have played through the original to enjoy this great title. Dreamfall: The Longest Journey (or simply Dreamfall) is one of the best adventure games I have ever played. Some may criticize this game because of the more of a cinematic story-telling angle to the game, rather than head-scratching puzzles. But I love it just the way it is.

In short, the game isn't for those hardcore adventurists who are looking for the same level of challenge as in the original game. Really, the only things linking this game to the original are the characters and the setting. Another similarity people will find in this game is the great story, arguably better than that of the original. The interface is simple, puzzles are enjoyable and the story is breathtaking. This game is a must-play for anyone looking for a great experience without the usual frustrations that accompany some adventure games.

Everything looks very nice here. The engine does a great job of rendering colossal environments and set pieces while running quite modestly even on low-end machines. Having written this review in late 2008, years after the game came out, that says a lot about the engine. It aged very well. The textures still look sharp, character animations are fluent – though some may find it annoying that a few characters do not open their mouths when they speak – they are not major characters however. It has to be said that the game plays very well. I had no experiences with texture pop-ins or getting stuck on objects/characters while walking around.

One of the high points of this game is sound. The sound design and score are absolutely magnificent here. You will find yourself wanting to find the artists who wrote these great musical pieces and downloading more samples from them. From strong bass during action sequences to tear-inducing piano solos, the sound production value is really through the roof. It doesn't just stop there, however. Much like the original, the game features a great cast of voice actors who really deliver on all their lines. Some from the original game, and some new actors, they both do a great job with their characters. You never really feel like it is someone just reading out the lines – they really do ACT behind the microphone, giving it their best.

The story. This is one of, if not the most important reason you need to play this game. Like mentioned earlier, no you do not need to have played the original to totally have a great experience here. However, if you did play the original, some of the returning characters will be sure to bring you unexpected joy, just seeing how they were re-imagined for the 3D engine. Not enough can be said about the amazing, tear-inducing story that is to be experienced here. Memorable, believable characters really make you appreciate their company and you get emotionally attached to them. I cannot say a whole lot about the story without spoiling it. It has many twists and turns, and most of them are rare to the genre, plagued by predictable Happy Endings. If this game were a movie, it would win Oscars for its story, I seriously guarantee you that. I personally cried at one point in the game. That's saying a lot. Depending on which characters you become more emotionally attached to, I can count at least 2-3 moments in the story that are worth a tear. This really is a great experience. There are almost no decisions to be made in the story, but rather on small-scale conversations. So the main story is pretty linear, with little choices made here and there. But that's not at all a bad thing.

The game only offers the single player campaign, with little more to add. It should take about 10 hours to complete, depending on how much you like exploring the amazing environments. It has a bit of a cliffhanger ending, but not too much in my opinion, so it's very enjoyable even with that.

This is what will make or break the game for some people. If you are looking for a great game, then by all means pick this up. The only people who will be disappointed here are those looking for a challenge, looking to solve epic puzzles and feel extremely proud of themselves afterwards. That's how the first game played out, and it is not the case here. While the original game had the type of puzzles where you not only have to figure out HOW to solve it (ie create a pattern), you then need to establish how to USE items to implement your solution (ie what the designer of the game thought you'd need to solve something). This is where many non-adventure gamers got frustrated at times. Well I am happy to say Dreamfall throws that out the window. The puzzles are much simpler to USE (figure out what you need to do) so from then on actually solving the puzzles is not that difficult. This is what made the game so accessible and fun for me, you really want to see how the story progresses, so the game occasionally throws challenges at you that are actually solvable (without consulting GameFAQs and then STILL not understanding how they expected you to come up with that solution).

The second negative point I have about this game is combat. It is absolutely terrible, and you have no way to avoid it during 2-3 sequences in the game. So you have to wonder, why they threw it in there at all? The fighting is all about perfect timing, and I mean flawless timing. It can get very frustrating having to play through the same sequences 3 or 4 times because you keep missing that last block and your opponent combo's you to death. It's useless and can be frustrating, but thankfully there are very few occasions where you need to fight, so it is forgivable.

In terms of the item collection, it is a big step forward from the pixel-hunt that was the original game. Here, all the objects are clearly visible, and as you approach them, they get a selection box around them. Click, and you get a nice menu of possible interactions. This applies to characters as well.

In the end, this is a great game. Think of it as one of those games you MUST play just to experience the story. The other gameplay elements are not groundbreaking, but they do their job and provide very solid support for what drives this game. If you haven't played the original, you will be fine. Enjoy the great characters, settings, and emotional connections. If, after playing this game, you wish to try the original (much like I did) prepare for a different experience, not nearly as enjoyable. I'll leave it at that.

Our ratings for Dreamfall: The Longest Journey on PC out of 100 (Ratings FAQ)
Presentation
90
This is a top notch story that is presented well and avoids the usual cliches. All the characters are memorable, and if you have played the original, recognizable.
Gameplay
83
Most of the puzzle solving is fairly intuitive and rarely requires you to check a walk through. The fighting element is a bit frustrating.
Single Player
87
An excellent playthrough for the story and characters, and the game is also at good length with about 10 hours, depending on how quickly you solve puzzles. Unfortunately, there is no replay value.
Multiplayer
NR
None
Performance
(Show PC Specs)
CPU: Intel Core i7 CPU 930 @ 2.80GHz
GPU: Sapphire Radeon HD 5870 Vapor-X 1GB
RAM: 6GB DDR3
OS: Windows 7 Professional 64-bit

83
The game runs great with no frame rate issues or texture pop-ins. No broken quests or NPCs were encountered, and the production values are top notch.
Overall
88
Dreamfall: The Longest Journey is an example of the adventure genre that may be in decline, so if you are looking for a good story, check the game out. Be warned that puzzles may not fully satisfy some fans because of their relative ease. 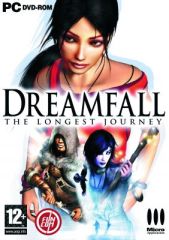