Demigod is a whole new take on the RTS and RPG genre. If you enjoy the popular DOTA mod, or simply looking for a new interesting game to try, Demigod will likely grab your attention.

Demigod has seen a rather dynamic development cycle. The game, an action strategy at heart, does not have any kind of a single player story or campaign. Instead, it is very similar to the popular WarCraft 3 mod, Defence of the Ancients (DOTA). For this same reason, it has drawn a lot of comparison to it, and thankfully for Stardock, Demigod stands on it’s own next to the very popular mod. Due to a lack of a campaign, most of the time was spent balancing the various demigods (6 in total) to ensure each has their own strengths and weaknesses. Needless to say, the game is indeed very balanced. It has that certain “tug of war” quality to it, with well-matched games lasting way past 2 or 3 hours. So, if you are looking for a game that’s all about matching your skills against AI or human opponents, without a need to bother with storylines, save games, or cutscenes, then Demigod is probably worth a look.
The term "demigod", meaning "half-god", is used to describe mythological figures whose one parent was a god and whose other parent was human. The game has some strong roots in mythology as far as the initial setup goes. Apart from that, however, the game is set in its own unique world. As I mentioned, there is no storyline whatsoever here, just the choices to play a quick match or a tournament (series of matches). At the beginning of each game, you get to choose your own Demigod to play as, for the duration of the match. This is where I am somewhat disappointed, because the game lacks any kind of a tutorial at all. There is a lot of information provided about each Demigod, including what their strengths and weaknesses are, but you really have no way of figuring out which style you like best without spending a few hours in Single player against easy opponents. All the skills and items in the game are well-described and tell you exactly what they do, but it does take time to read through and then choose what and when to use. This takes time, and the game is pretty ruthless not being able to pause while you want to select your next skill upgrade or item purchase. Once you’ve selected your character then, you are off to the battlefield.
The game allows for various team play, most commonly 3 on 3 or 4 on 4. Each player gets to control 1 Demigod of their choosing, and there can be more than one of the same type per team. The basic gameplay consists of a few standard modes such as annihilation, destroying a certain number of enemy demigods, and holding flags for a certain amount of time. At any point of the game, the player is only in control of their Demigod, however this isn’t the battle of the Titans. Each team gets a set of portals, from which various small minions emerge and take a dedicated, static path towards the enemy base. These minions, if left unaided by Demigods, will fight to the end with the other team’s minions, who follow a path opposite of theirs, into your base. These will often end in deadlock, especially during the early going. While they may seem insignificant, as the game goes on and teams gain portals sometimes located mid-map, it can certainly swing the battle in either direction. A big difference maker for your minions are upgrades, which can be purchased though your Citadel (home base) with gold. These upgrades are like an evolution tree, each stage granting your minions better armor, more health, higher attack power, new unit types, etc. It is definitely a worthy investment. Gold is acquired by either holding a flag next to a gold production machine, or by killing/assisting in killing enemy Demigods. The gold can also be spent to purchase various items, such as amulets that increase your health, or simply health and Mana potions. There are also weapon and armour upgrades you can apply to your Demigod, further adding to the RPG elements. 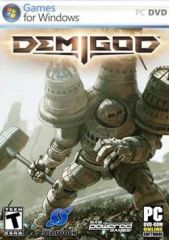 Our Review of Demigod
72%
Good
The Verdict:
"Demigod is a whole new take on the RTS and RPG genre. If you enjoy the popular DOTA mod, or simply looking for a new interesting game to try, Demigod will likely grab your attention."
Game Ranking
Demigod is ranked #953 out of 1646 total reviewed games. It is ranked #54 out of 69 games reviewed in 2009.
952. Supreme Commander 2
PC
953. Demigod