Rock Band 3 continues the evolution of the series, offering new instruments and modes of play that bring music closer than ever to reality

There’s certainly been no shortage of the music rhythm-based games this generation. From the almost-annual Guitar Hero iterations to DJ Hero and other emerging franchises, Rock Band has always had stiff competition in the genre. But, between the numbered franchise entries to the themed ones like The Beatles and Green Day, Harmonix have managed to keep on top of their series and provide something new to the fans over the years. After a two year break since the last game, Rock Band 3 enters the scene with high expectations from fans, and aims to achieve those goals from the start. Featuring 3-part vocal harmonies, various gameplay tweaks and modes, as well as professional-grade hardware, Rock Band 3 is a great entry into the franchise, though a costly one.
For those not familiar, Rock Band 3 allows players to play various music using special instrument controllers mimicking lead and bass guitar, drums, and vocals. The original Rock Band was the first title in the industry to allow such interactions, with Guitar Hero only being limited to guitar at the time. This time around, Rock Band 3 does not offer a band set for purchase, so those wishing to jump into the game will first need to purchase a previous Rock Band title for the instruments. Instead, the game comes bundled with the new controller – a keyboard. The instrument features 25 full-sized keys, and is MIDI compatible, so it to be used outside the game. 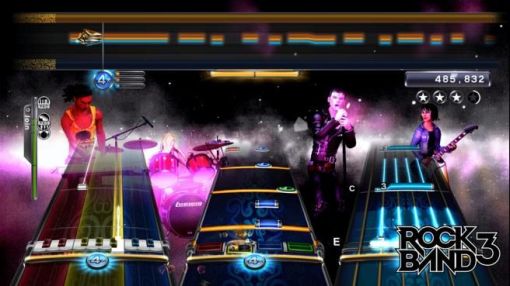 With the addition of this instrument, the gameplay has also expanded to include keyboard parts of songs. These parts are played in a similar manner as the guitar and bass, as the players strike a key in one of the four zones matching to the on-screen prompts. A range of white keys represents a colored string in the game, so hitting any key within the range works. For songs without the keyboard parts, the instrument can still be used as a guitar or bass in the same fashion. Unfortunately, the hardware is difficult to come by, and we were not able to test out the peripheral fully in time for the publishing.
Once the game is underway, there have been many changes made to the friendliness of the experience in Rock Band 3. Players start by selecting any difficulty they wish, and should they want to change it during the song, they’re able to do so without having the need to start over. The menus have been touched up and revamped to allow for not only a more personalized presentation, but also ease of navigation. The song catalogue has been adjusted for much easier sorting based on difficulty, artist or just a random mix. The game ships with 83 songs, but the DLC that’s available for the game now reaches almost 2000 tracks. The songs that ship with the game are of wide variety of styles, though it feels that the “rock” aspect of the game has been sacrificed to include more pop tracks that utilize the new keyboard controller. Still, the selection is diverse and has an appeal for everyone, which is great for group play.
123Next