An arcade alternative to the main series of NHL hockey games, that offers too little value to easily recommend

As other sports got their arcade remix from EA, such as FIFA Street, the NHL series has remained largely focused on the proper yearly development cycle. Now, the time has come for the hockey series to get its own take on the rules-free fun with NHL 3 on 3 Arcade. The game was developed by the same team that worked on NHL 09, and published under the EA Sports Freestyle label. The game offers an arcade experience for those who don’t take hockey too seriously, or just looking for a fun diversion from the main NHL franchise.
NHL Arcade has a few things in common with the real game, but as far as gameplay goes, all rules are disregarded. Apart from the core mechanic of skating and playing with a puck, much of NHL Arcade has been removed or modified to make a purely arcade sports title. As the title suggests, the game takes place on a small ice rink with 6 players, three on each team, and goalies. These players are selected before the game begins, and there are no line changes, or fatigue, or anything else that can slow down the pace of the gameplay. 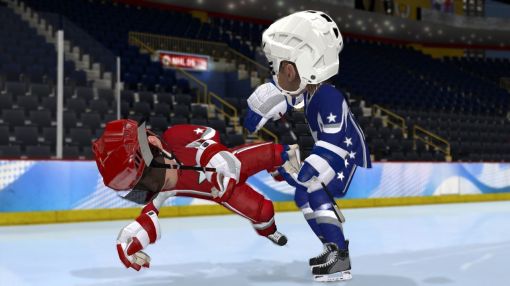 A wide variety of players are available to be selected for your team, though mostly superstars, from either Eastern or Western NHL divisions. There are three skater types - strong, fast, and all-around. These classifications are mostly trivial and don’t have a huge impact on the gameplay, but each player can only have two players of the same type. The goalies do not have varying attributes and act similarly. Once ready to play, users can either take to the ice controlling all three skaters, or go online and play with two other humans on their team. There is also local multiplayer available.
On the ice, the game controls very similarly to the NHL franchise. Players can use button controls or the right stick to shoot and bodycheck, while left stick controls the movement. As the game begins, there are no rules or referees, just players skating around the ice rink and attempting to score. The game is generally fast paced thanks to a small rink and very lively puck physics. Scoring on the AI goalies is generally difficult, but a lot of the same moves from the NHL franchise also work in this Arcade title.
What brings uniqueness to the game is the power-ups. Once a player on either team lands a big body check, a random powerup item drops on the ice for that player’s team to pick up. Any player from the team can pickup this item by skating over it, and the effects of all powerups are either timed or until the next goal is scored. There are 8 different powerups in the game, and they drop randomly with most of the big body checks. Most provide a boost to a player’s attributes, such as giving him super speed, a huge body size, or a super slapshot. Some powerups are much more instrumental to scoring than others, and there are a few that affect the goalie – making him a giant or a tiny guy. A few powerups actually act as an obstacle to the other team, such as freezing one of your opponents on the ice. 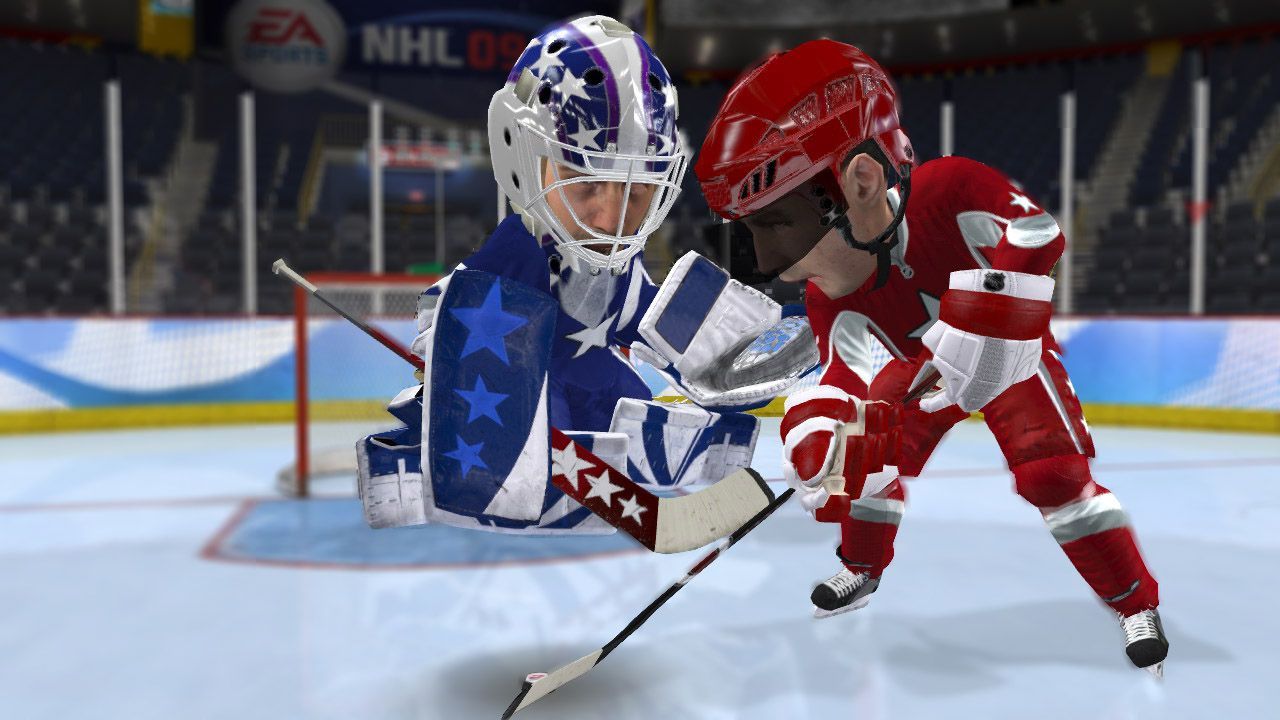 The game is actually played to the certain amount of goals scored, rather than based on a time limit, so things can go for quite a while if two good defensive players meet. Most of the time though, your online teammates will rarely give up the puck, so teamwork is mostly absent. The game also suffers from a number of glitch goals that are directly descended from this year’s NHL series game. Apart from the simple goal scoring and using powerups, the game is fairly shallow, with no more modes of play available. As such, many will consider this to be a poor value for the money given the steep price point at release.
The presentation is fairly amusing, with all players having oversized heads and powerups creating some fun animations. The music is rather simple, and the sound effects will either amuse or annoy. All of the menu sounds are done with a dialogue voice, so navigating around the menu produces various “woosh” and “zing” sounds. Powerup effects and on-ice sounds have a similar sound presentation. The visuals are very familiar to those of NHL 09, as the game runs on the same engine.
NHL Arcade brings enough to the table to be a generally appealing time waster. The presentation may be annoying to some, but everything is done with a certain style that promotes the simple nature of the game. Offline and online play consists of the basic goal scoring and powerup use, with not much else on offer. As such, while the game can be fun, it simply doesn’t offer enough content to warrant its price point, and doesn’t have many lasting qualities without a dedicated set of friends to play with or against.
Our ratings for 3 on 3 NHL Arcade on Xbox 360 out of 100 (Ratings FAQ)
Presentation
75
The menu sound effects, big player heads, and amusing ice chatter make for a solid and appropriate setup. Could become very annoying for some players.
Gameplay
50
Basic 3 on 3 hockey with random powerups thrown in. Fun for a bit, but severely lacks any kind of variety. Only win condition is who scores the set amount of goals first.
Single Player
54
Playing against the CPU is fun in short bursts, but things quickly become stale.
Multiplayer
75
Both coop and versus play, offline and online, is available. There's not much in the way of teamwork, but things can get pretty amusing and chaotic with a bunch of friends.
Performance
80
Runs solidly, borrowing the player models and animations from NHL 09.
Overall
62
A fun diversion that requires a set of friends to play with, and with only one basic gameplay mode included, it's not quite worth the price tag. 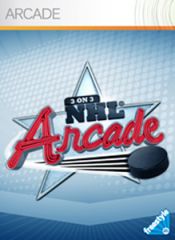