Point-and-click adventure games don’t make much noise upon release anymore. The genre has been around for over three decades and it rarely sees significant change. So you can forgive gamers for not being wowed when another indie studio puts out a new adventure game, even if it has an interesting art style. Children of Silentown does have an appealing visual design but it is ultimately just a passable 2D adventure to add to the growing pile. Its puzzles and story are plain and predictable, despite a few minor twists added via some learned songs. Certainly there are high notes in Children of Silentown but not enough of them to see it escape from the middle of the pack. 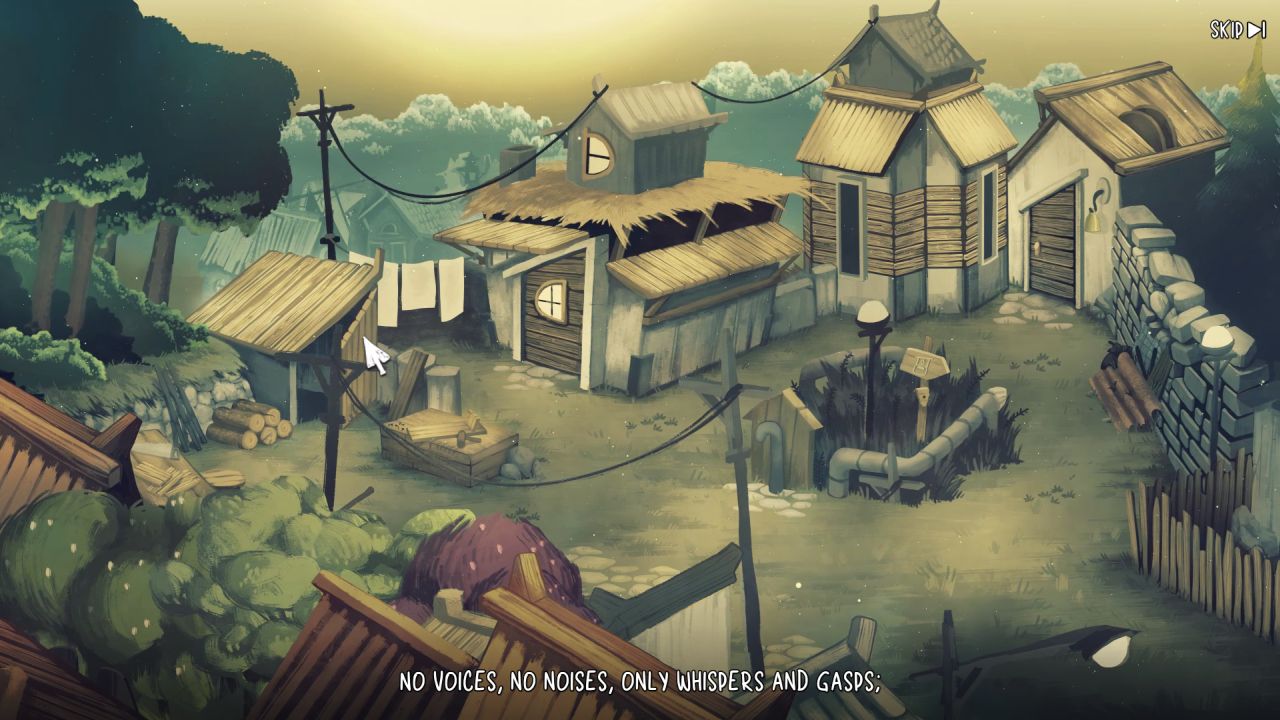 Silentown is a small village in the middle of a forest. The adults here insist on two rules: no shouting and no going outside at night. All the kids know that monsters in the forest kidnap people in the dark, never to return. And once somebody is taken, not many attempt a rescue because they always go missing too. You play as Lucy, a twelve-year-old girl that has nightmares about the dark forest creatures that roar in the night. Although she doesn’t completely understand the threat, Lucy follows the rules to stay safe. But everything changes when her mother goes missing. Lucy now seeks information. She wants to find out what the others know about the so-called monsters and why people get taken. And, eventually, Lucy will have to enter the forest and find out for herself.

The story in Silentown is a bit like a children’s book, with repetition and rules at the forefront. Some of the dialogue is clunky, with far too many text bubbles containing ellipses that must be clicked through. The tone is also off occasionally, like when an older character chuckles after talking about the death of a loved one. Although some of Lucy’s nightmares are dark, the horror is minimal and suited to a younger audience. Much of the clumsy prose is also tolerable because it is usually from children. Lucy will play games with the other kids, like hide-and-seek, as well as querying them about the forest when adults refuse to answer. The story is also not without charm. Certain characters are appealing in their quirky ways and children’s names match their hair color. When exploring the town, the game settles into a repetitive groove where Lucy performs fetch tasks and this usually means solving puzzles.

The puzzle design is straightforward and similar to most 2D point-and-click adventure games of this style. Lucy has an inventory she can use to combine items and also drag them onto the world to perform actions. She’ll need to move between locations (screens) in order to solve puzzles and find the right item—there is a lot of going back and forth. Some objects that can be grabbed from the world are not immediately obvious, bringing back a tiny bit of that classic pixel-hunt feel. Across her journeys, she will need to combine a hook and rope to climb over a wall and also use her slingshot to cause an accident. For the most part the puzzles in the town only have a few steps and, as long as you are thorough, they are not hard. 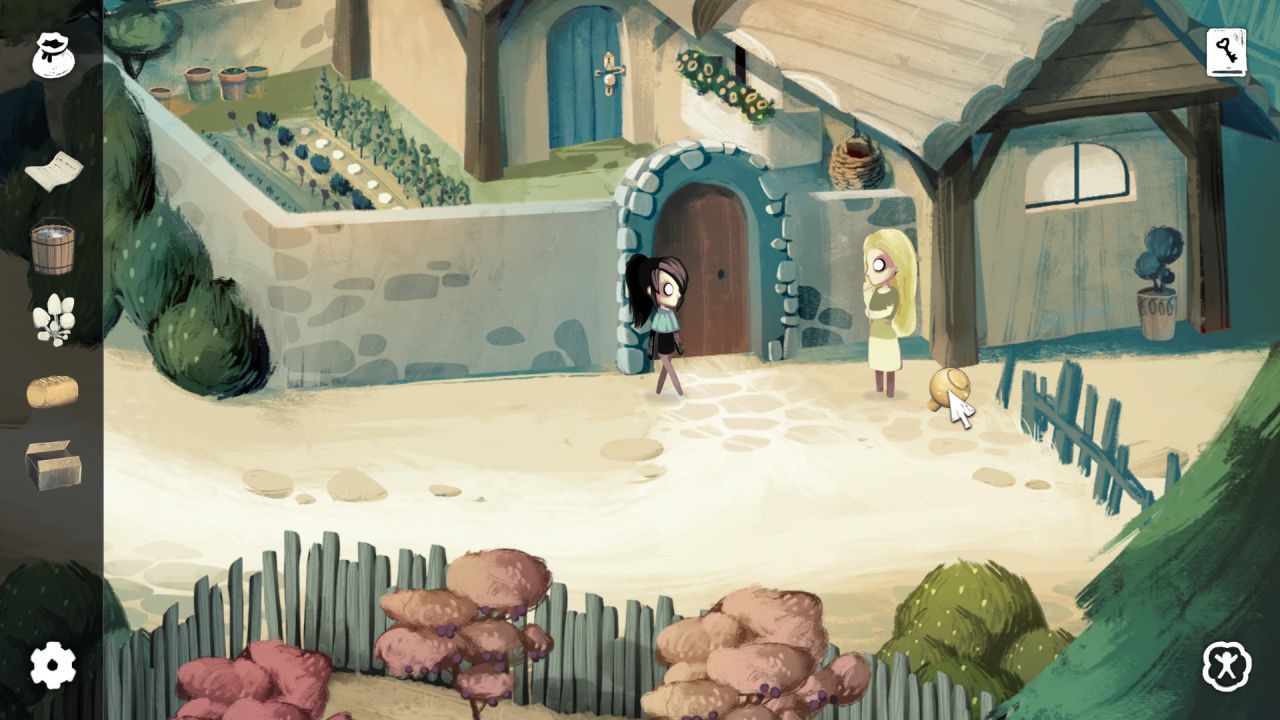 The songs Lucy discovers add layers to the standard adventure puzzles. Lucy will learn a song after she finds three notes, most of which come via major story moments, although only three (of four) are required to complete the game. Once each song is acquired it becomes a tool in your arsenal. The first song lets her know what characters are thinking; this can reveal a child wants candy in exchange for safe passage. The second song will let Lucy view memories associated with objects, which can then cause a character to perform an action. And the third song reveals hidden paths, used mostly in the second half of the game. These songs prompt players to scan the screen whenever progress has stalled. Usually it is obvious where songs should be used but there are some optional puzzles to muddy the waters. While some songs work just by clicking, often a mini-game pops up and it must be solved before they have an effect.

The mini-games for the three songs are simple single-screen puzzles that can get repetitive. The first involves passing a thread through buttons. It is the most logical of the song puzzles and gets gradually more challenging but never too hard. The second involves spinning pipes to create a path from A to B, and connecting the pipes with cogs to spin them together. At first, the pipe puzzles can be solved via luck, but eventually they get harder (with multiple exits and traps) and require careful cog placement with a sequential approach. And the third song’s mini-puzzles involve light beams, which only took a few attempts to ‘solve’ but never really made sense. The mini-games are mostly fine, but some get used in quick succession which stalls progress and is fairly boring. 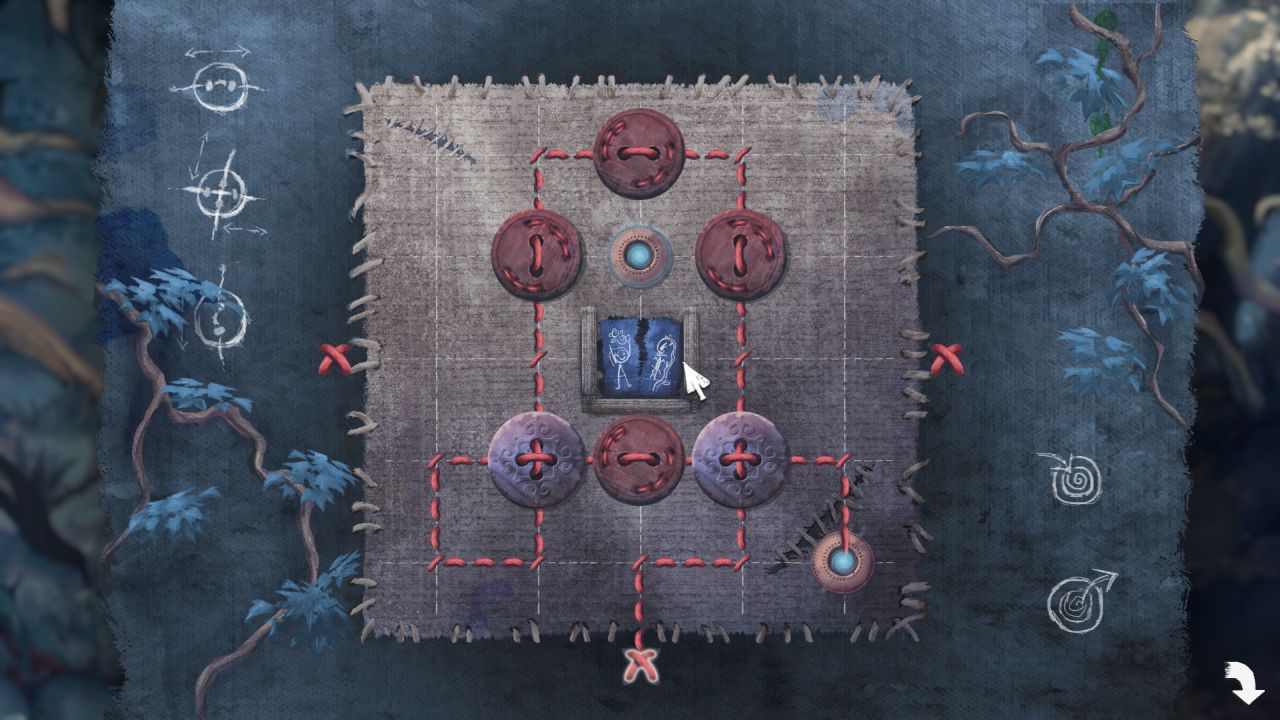 When Lucy finally gets to explore the forest, puzzles become more abstract. Even the song functionality shifts slightly to increase the challenge. The forest areas feel more like a true adventure, compared to the workmanlike sections of the town. No more fetch quests; the forest is more like an escape room. It also evokes thoughts of The Monkey Island series or other strange adventure games that take the player to alien worlds. It’s refreshing to first work out what things do before actually trying to solve a puzzle. The downside here is that, since Lucy ventures into the forest alone, there is nobody to talk to and so the story does not progress much.

The forest area is also the highlight when it comes to the above-average visual presentation. The vistas in both the forest and the town generally look good. Brush strokes give the world a cozy feeling but with enough detail. Characters look strange without feet or hands or mouths, but their design is good otherwise. The forest makes good use of colors, due to strange plants and other structures. Also, unlike the repetitive town, most areas of the forest are only visited a few times to keep a smoother pace until the finale. The audio side of things is less impressive, perhaps on purpose given the town’s vow of silence. None of the characters are voiced, aside from the infrequent narrator. It has some music, but it is quite forgettable compared to the visuals. 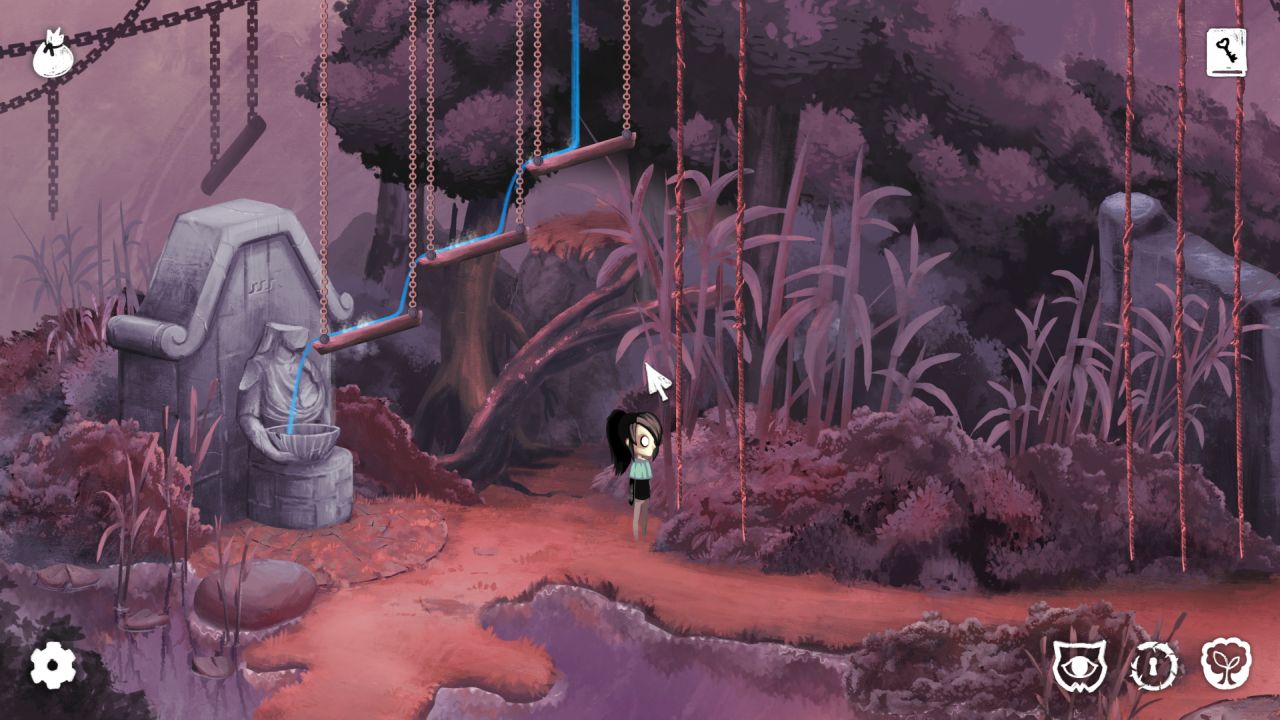 Children of Silentown is a fairly simple adventure game, led by decent visual design. Its puzzles are straightforward and the story is a bit clunky across its five-hour runtime. The songs that Lucy learns do add layers to the basic puzzles but do not require much thought. Exploring the forest area in the second half of the game is a refreshing turnabout from the mundane experience found within the town, thanks to the abstract puzzles and intriguing visual backdrops. But even the forest’s fresh air is not enough to propel Children of Silentown above what is merely a satisfactory game that might keep adventure gamers quiet for a short while.

Our ratings for Children of Silentown on PC out of 100 (Ratings FAQ)
Presentation
75
The visual design is the game’s best quality, with some nice hand-drawn scenes that have obvious brushstrokes and good detail. Audio is far less prominent and characters are not voiced.
Gameplay
65
Most puzzles are quite basic with songs that add layers. The puzzles in the forest are more interesting in comparison to the repetitive fetch tasks of the town.
Single Player
55
The narrative is quite simple and occasionally clunky, and it has a few issues with tone and delivery.
Multiplayer
NR
N/A
Performance
(Show PC Specs)
CPU: AMD Ryzen 5 3600
GPU: ASUS 6700 XT DUAL OC 12GB
RAM: 16GB DDR4
OS: Windows 10 Pro 64-bit

90
No performance issues.
Overall
65
Children of Silentown is a nice-looking but bland adventure game due to basic puzzles and mundane objectives, although its second half shows more potential. 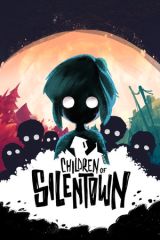