When it comes to the extreme sports genre, Roll7 has established itself as the modern-day king. The OliiOlli franchise has received critical and commercial acclaim for its fresh style and precise mechanics. While that skateboarding series has been their bread and butter, the studio hasn't been afraid to travel outside their wheelhouse. Both 2D sidescroller Not a Hero and the multiplayer focused Laser League found their fans as well. For the team's latest effort, Rollerdrome, they are blending together what they have found success with: the smooth skating of their hit franchise and the frenetic action of their one-off releases. 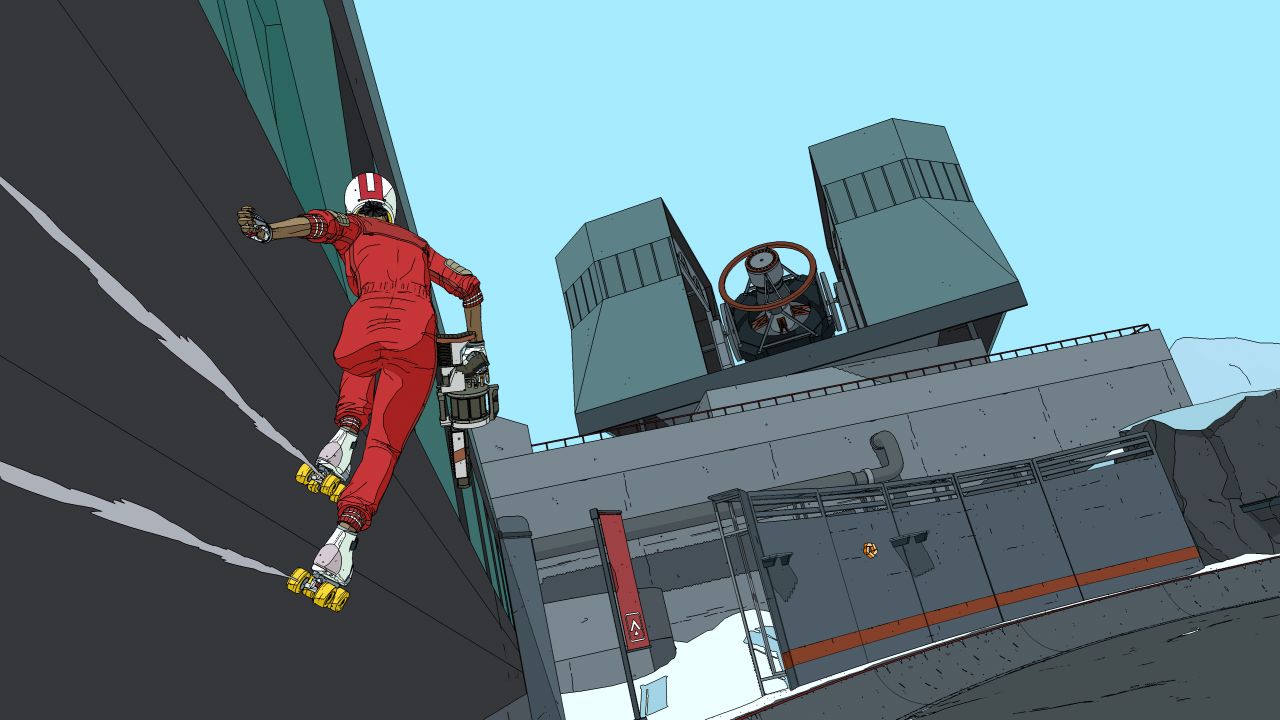 It's the year 2030, and the biggest craze in the world of sports is Rollerdrome. Bringing together the glamour of rollerskating and the thrill of murder, the sport has sated the appetite of bloodthirsty fans everywhere. You play as Kara Hassan, a newbie to the league who is looking to make a major name for herself. And she'll need to do so, as she has taken out a major loan to finance the entry into the competition. Instead of directly competing against other skaters, you are tasked with taking out the so-called house players. These are essentially paid grunts whose sole mission is to eliminate you. Oh, and along with all of that, Matterhorn, the company behind the sport, may be up to some shady dealings.

The funny thing with the universe of the title is that you are basically free to ignore it entirely. During the skating and shooting sections, you're not given any new insight into the plot. It's designed that way so you can specifically focus on surviving the onslaught of enemies. However, in-between different level tiers, you can walk around specific areas and uncover new details on both Kara and the world of the game. Typically, I would complain about the lack of information conveyed to you, but I like how it's handled here. Details regarding the shady nature of the company behind the sport, and the guerrilla groups opposing it, are sprinkled in just enough to provide intrigue. At the end of the day, Kara is just an athlete, so it would seem a little strange if she was uncovering government secrets. A sequel could perhaps expand upon all this, but I'm fine with how it is weaved into the game.

Considering Roll7's pedigree, it's not surprising that Rollerdrome is designed to get you into action as soon as possible. Instead of skateboarding, this third person 3D action title has you rollerblading around uniquely designed arenas. Sometimes you'll be flying around a hollowed-out mall food court, while another area takes place on what looks like a snowy helipad. Regardless, each level contains ramps, rails and other pieces of décor used to unleash tricks. Nailing tricks is a key component, and not just from a score building perspective. In order to refill the ammunition of your weapons, you'll need to land some tricks or grind some rails. The flashier and more special the maneuver, the more ammo you will recover. 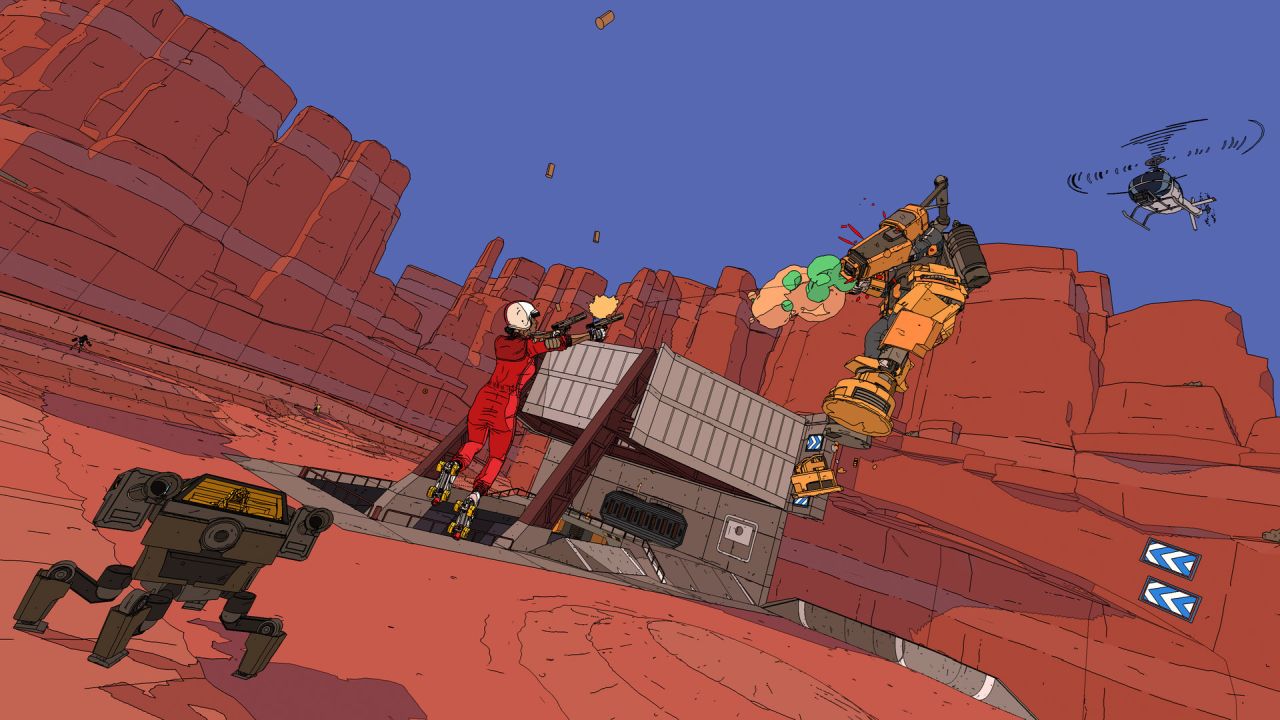 With as chaotic as things can get, it's good that the mechanics aren't as complex as those found in the OlliOlli series. To make sure that the shooting and skating blended into a palatable combination, Roll7 whittled them both down to the basics. Once you begin moving forward, you will always be moving forward. You just need to focus on what direction you are skating in. When trying to land tricks, you don't need to worry about wiping out, either. You cannot fall over if you land weirdly or don't pull back on a grab early enough. Auto-lock is also provided as long as you are close enough to an enemy. This allows you to focus on dodging attacks or hitting tricks while still being able to take out foes. You can still shoot enemies outside of the auto-lock of course, but the risk of trying so isn't always worth it.

Kara also has two side skills that level the playing field against the waves of grunts she must take out. Both will be used equally, but the ability to enter bullet time is an invaluable skill. It allows you to not only dodge some of the larger attacks, but also provides the opportunity to focus on smaller targets. With the action slowed down, you can take out a series of missiles headed your way, then turn your attention to the rocketeer who fired them off. The other important skill is a dodge roll. Pretty self-explanatory, you can use the dodge to avoid the likes of sniper rifle fire or smacks from a club. Hitting a perfect dodge will also give you a short burst of additional bullet time.

In its best moments, Rollerdrome is a thrill to play. You feel like a badass skating around enemies and taking them out in stylish fashion. The intensity of each round, which is noticeable right from the get-go, ensures the game doesn't feel like a pushover either. I strained my shoulders because I was so locked-in on the action going on on-screen. However, there are still moments where your biggest enemy is not the guy with the grenade launcher, but the camera. It tends to give you crappy angles, specifically getting wedged in a front-facing angle. You can spin it back around, but with how fast-paced the game can get, any second spent finagling the camera could be dangerous. And while the controls are good enough to handle the gameplay, there were times where they felt sluggish. Trying to land a specific trick or grind can become more of a pain than it should be. 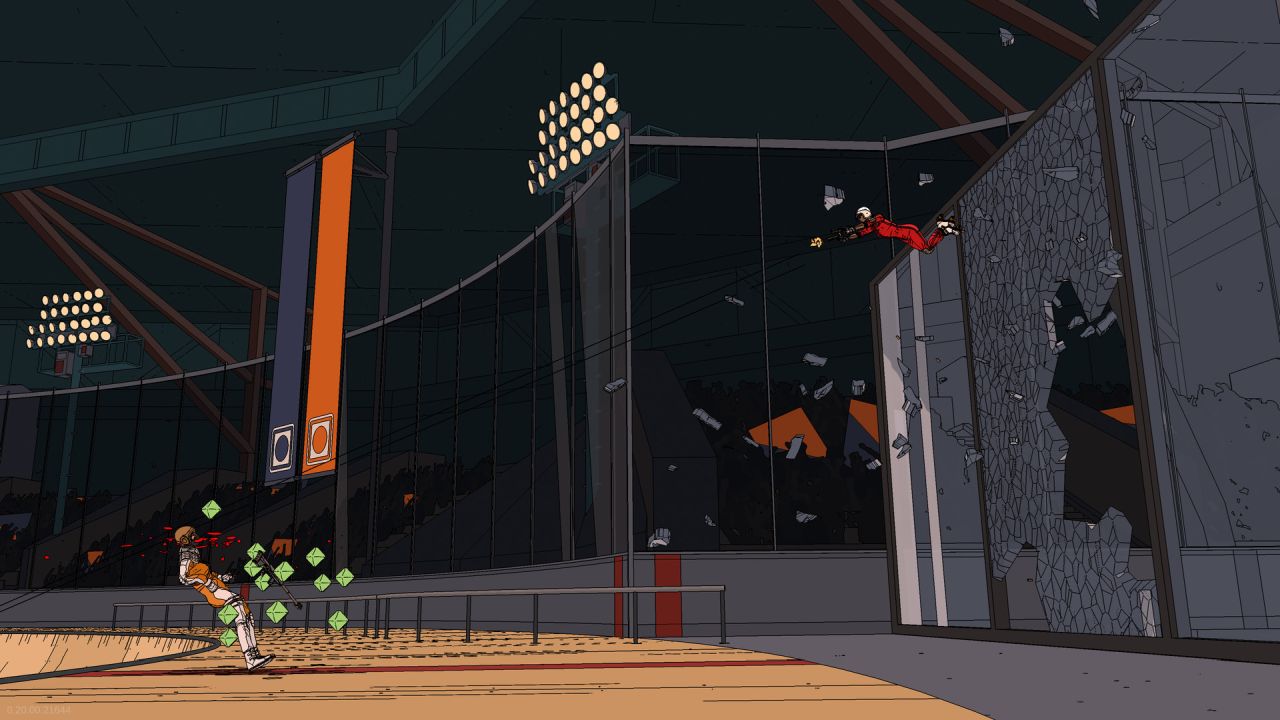 Rollerdrome proved to be a challenging title for me to complete. The campaign mode breaks down the levels into four different tiers. To move to the next tier, you not only need to complete all of the levels in the tier you are currently in, but also a set number of side-challenges. These side-missions run the gamut from beating certain high scores, to collecting tokens, to eliminating all enemies with only one weapon. It can be hard enough to just survive a level but having to focus on completing these additional tasks is even tougher. Thankfully, the title also provides a suite of assist options to help you progress. I didn't turn on God Mode myself, but I did modify the percentage of damage done from enemy attacks. You can also turn on unlimited ammo, or even choose to just bypass the side-missions altogether. Turning on these assists may remove some of the danger of the campaign, but it's better than getting stuck and not being able to complete it at all.

Roll7 has always given their games stylish presentation, and Rollerdrome is no exception. The colorful visuals of the title remind me of a better moving version of Sable. The environments aren't the most detailed around, but the colors really pop on-screen. The jumpsuit and helmet combo Kara sports is basic but fits well within the universe of the game. I would have liked to see some more variety in the enemies, though. The same house player models are used from start to finish. To match the chaotic action on-screen, composer Electric Dragon has delivered an exceptional soundtrack. The music of 2030 is heavily influenced by the past and carries a hectic beat that always matches what you are doing. The soundtrack has now entered my rotation of music to listen to while I work, which is as strong of an endorsement as I can give.

Rollerdrome is not going to be for everyone. The intense action of a match and the harsh difficulty may prove to be a barrier too tough for some. However, I can easily see a dedicated audience forming for the title. It's a wholly unique experience that is easy to learn, but difficult to master. The game continues to show that Roll7 has become really good at what they do in these subgenres. And while I'm sure they will return to their familiar roots next, I hope that they continue going off in weird directions like they did here.

Our ratings for Rollerdrome on PlayStation 5 out of 100 (Ratings FAQ)
Presentation
77
Rollerdrome has style to spare. The visuals are colorful and fantastic, and the soundtrack perfectly suits the future sport you are partaking in. There is a noticeable lack of detail in the environments and the mooks you face-off against are one note.
Gameplay
74
Roll7 wisely decides to make their typically precise skating more flexible here. Skating and shooting doesn't feel as overwhelming as it perhaps have could have. Issues with the camera and button input make completing later levels more difficult than they should be.
Single Player
64
The plot of Rollerdrome is basically non-existent. It doesn't pop up while you are skating around, and can be pretty much ignored entirely. However, optional plot focused segments house story threads that offer intrigue. There are only 11 missions in the main campaign, but upon completing the campaign, you do unlock optional versions of them that significantly boost the difficulty.
Multiplayer
NR
None
Performance
NR
No noticeable issues during my time with the title on the PlayStation 5.
Overall
75
Rollerdrome certainly has its issues, but the overwhelmingly chaotic action is fun enough to compensate. I continually found myself dropping back into levels to try and chase higher scores and take out my foes with increasing style. There are elements that could have been fleshed out further, but considering the scope of the project, I'm impressed with the results. 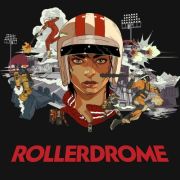 Our Review of Rollerdrome
75%
Good
The Verdict:
"Impeccably styled and ruthlessly difficult"
Game Ranking
Rollerdrome is ranked #851 out of 1841 total reviewed games. It is ranked #34 out of 101 games reviewed in 2022.
850. Mario Strikers: Battle League
Switch
851. Rollerdrome

All videos for Rollerdrome (1)
Advertisement ▼