A new perspective in a lost city

A few decades ago, there was a brief period when a number of games made players feel physically small. Whether you were a toy, a small creature, or simply got shrunk by some scientific experiment, there was a tiny cultural subgenre for this type of experience - from full games to custom maps in multiplayer. Perhaps this forgotten genre is making a bit of a comeback, with games like Grounded, and now the PC/PlayStation exclusive Stray, a debut title from BlueTwelve Studio. 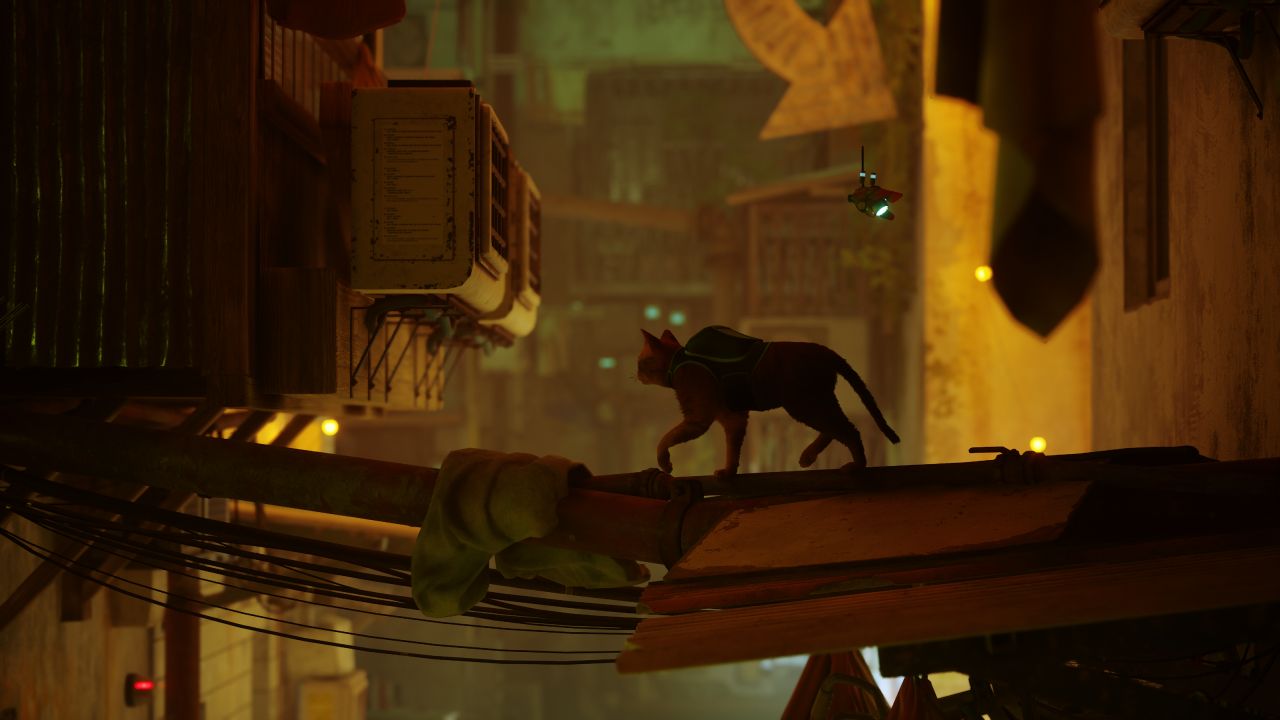 Stray follows the tale of a cat who finds itself separated from fellow strays, when a pipe suddenly gives way. It falls down into the depths of a concrete structure, where you soon encounter its inhabitants: sentient robots. These robots have apparently been stuck in this underground city bunker for a long time, unable to escape and waiting for humans to return one day. They dream of the world above, and with the help of their new furry friend, they get a renewed sense of hope. The cat also meets a small companion drone named B-12 early on, who allows you to understand what others are saying. B-12 itself has a slight case of amnesia, and while you adventure together, it's also trying to remember who created it and why.

The game's narrative may be fairly straightforward and follows familiar beats, but it is well executed. The story unravels at a steady pace and the characters you meet, however briefly, are fairly fun. The cat isn't able to speak, but it listens as a player proxy to everything that B-12 and the robots ask it to do, and somehow presumably is able to understand. The voices are all just noise, and instead you will be reading text boxes during dialogue, which works fine. Diligent exploring leads to finding B-12's memories, which helps add a pretty good amount of lore and background to the setting. Perhaps the only bit of minor criticism can be levied against the final chapter, which feels slightly rushed and doesn’t offer an entirely satisfying conclusion.

Players take control of this stray cat in this third person adventure title. Exploring the dark neon-lit streets of the underground city provides a good sense of atmosphere, and playing as a cat also offers a fairly unique perspective on the world. The developers have done a good job of capturing the essence of the animal – its eyes glow in the dark when reflecting light, and there are mechanics that carry no gameplay purpose, such as the ability to drink water, being able to nap in certain spots, and a dedicated meow button. The authenticity of the meowing noises is unclear, as my own cat seemed to care little no matter how much I used the button. You can also scratch on some surfaces – while it has rare gameplay use, for the most part it's just there as a random interaction. 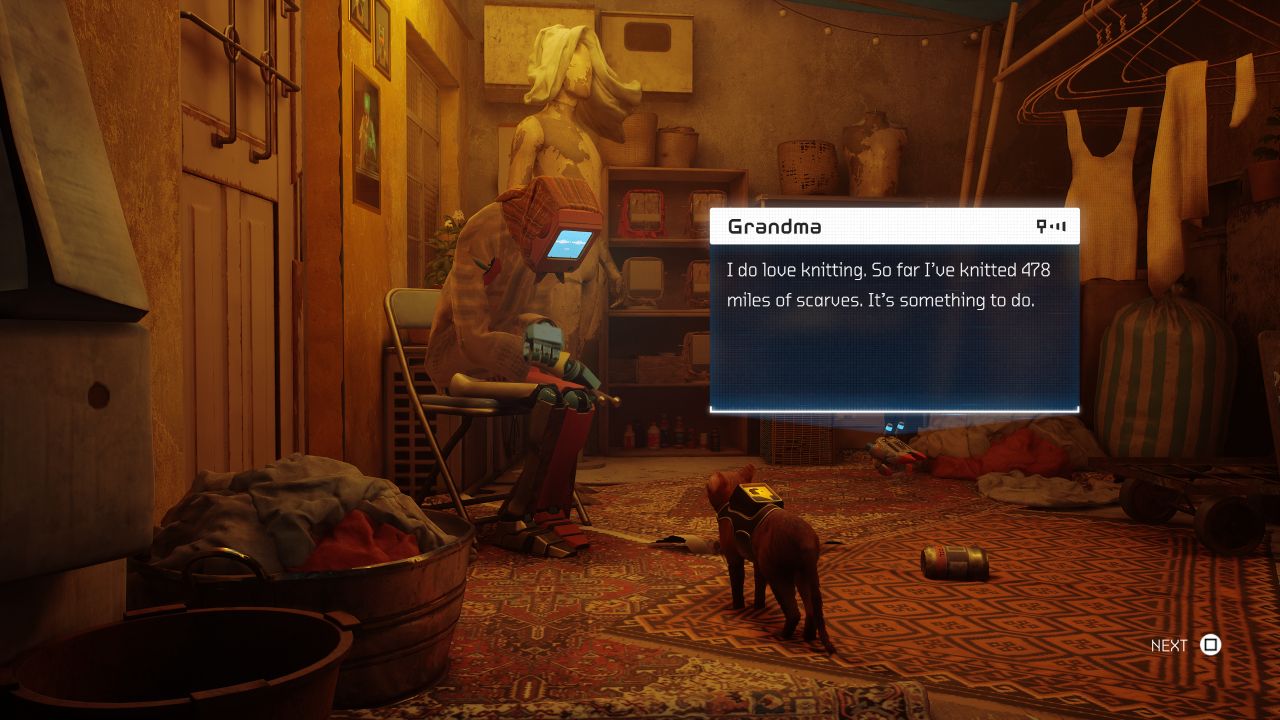 The campaign is composed of two hub areas where you can explore the environment and complete main and optional activities, and linear levels. The linear levels pull out the typical stops – an escape sequence, a stealth sequence, and a few different environmental puzzles to solve. The only enemies in the game are little creatures called Zurks that have overwhelmed some areas of the city, and are part of the reason why the robots cannot leave. They chase and try to attach to you; you can shake them off, but if too many grab on, it’s game over and you have to restart at the recent automatic checkpoint. Zurks only appear in the linear levels and act as a source of danger, sometimes requiring the cat to be quick with puzzle solving.

The puzzles are mostly fairly simple, as you have to jump, push levers or barrels, and occasionally activate events in certain order. You may need to unlock a safe by finding a code written nearby, or dodge moving lasers. The biggest challenge aspect of the puzzles is probably finding the item that you need, rather than trying to understand how to use it. This is especially true in the hub worlds, where you can explore a number of different streets and buildings, as it can be very easy to miss an item – which could lead to you wandering around for 20 minutes trying to understand how to progress. You can ask B-12 for help, but it only offers generic quest-related info on what to do next, rather than where to go. Speaking of, B-12 acts as not only your speech interpreter, but also an aid in some of the puzzles, as you can use it to interact or hack certain objects remotely which the cat cannot reach. It also offers a flashlight, which you pretty much never need to use apart from the puzzle where it is introduced. Still, it is all very straightforward, though well implemented.

The cat does have an inventory thanks to a backpack that B-12 equips on you, and you can bring up a short item list and speak to the various robots around the hub world. On the one hand, being able to chat up almost every single NPC adds to the atmosphere, but on the other hand almost all of the robots have just one line, and if you show them an item, they also all respond with the same generic answer. There's little doubt as to who the key NPCs are, but it would have been nice – since the option is there – for the rest of the robots to have a little more to say, and not make you stop just to hear their very short dialogue. You can cause a bunch of mischief by running around and knocking over everything in sight, on tables and shelves, which is amusing though sadly nobody reacts to it. 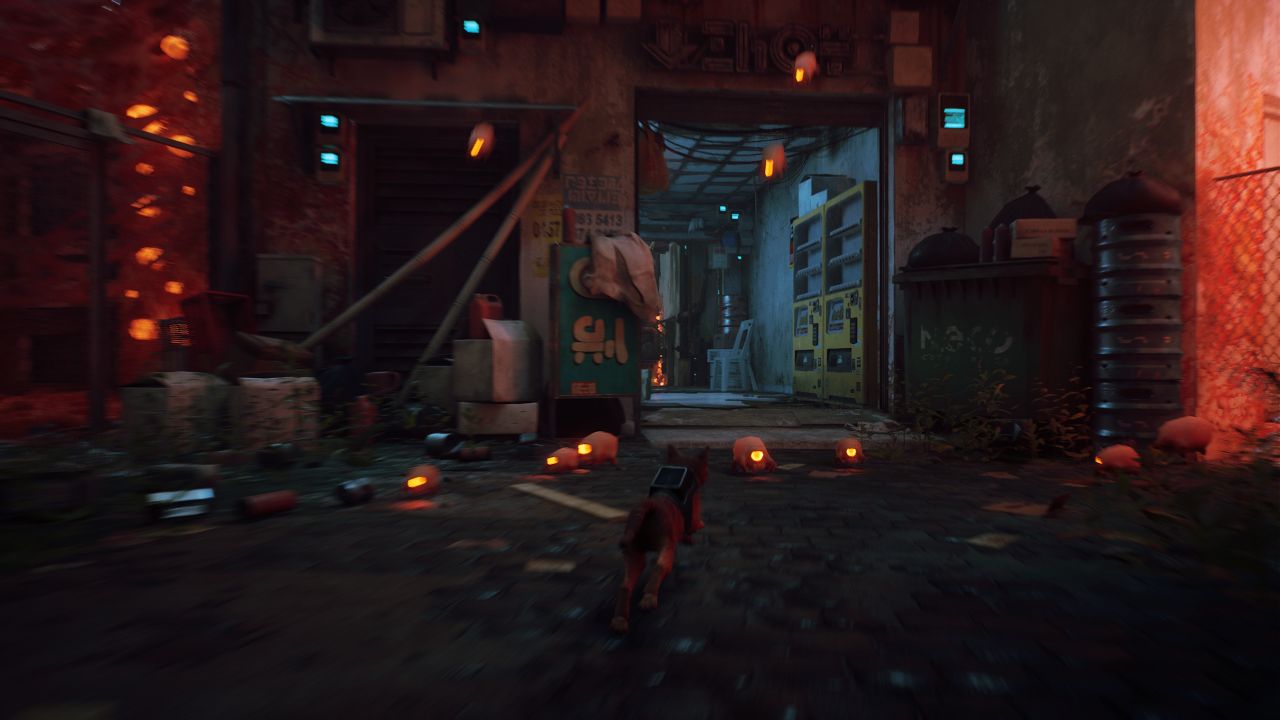 The game's unique perspective of being a cat probably offers the most when it comes to exploration. You become quite adept at spotting objects that act as ramps for you to get higher, whether it's garbage bins, pipes, air conditioners, and so on. Exploring the two hub levels makes you appreciate the cat's agility and being able to sneak through smaller spaces. The platforming is fixed, meaning you cannot jump freely, and only to the designated surfaces when the prompt appears. This restricted movement makes the linear levels feel quite simple, even if there is occasionally more than one path to take. But in the hub world, it helps streamline the exploration which may otherwise have been a bit overwhelming with options.

There is a variety of paths to take and the hub levels have a number of events that you can trigger, just by exploring, which is an interesting choice and it gives the world a livelier feel. Eventually you realize that these interactions are unmissable, as they are related to the main story, but it's neat to have things happen potentially out of order. Although – this does again lead to the problem of assuming that an area is fully explored, but in fact new paths have opened up once you progress the story further. But nonetheless, prowling through the small hub sections of the city is enticing and feels rewarding. In addition to the main story, there are also collectibles to find in these levels.

The environments are well designed to allow for both exploration and immersion. During linear sections, various neon signs glow to help indicate the path forward (not that they're needed). In the hubs of the city, there are different types of streets and NPCs that help add some variety and diversity even in these relatively small sections. There are even rare horror-like moments, which were surprising for a game such as this, perhaps aided by the scenario of just being a small cat. Because of the low-to-ground perspective, the camera view can be at times awkward, though it's not a major problem. 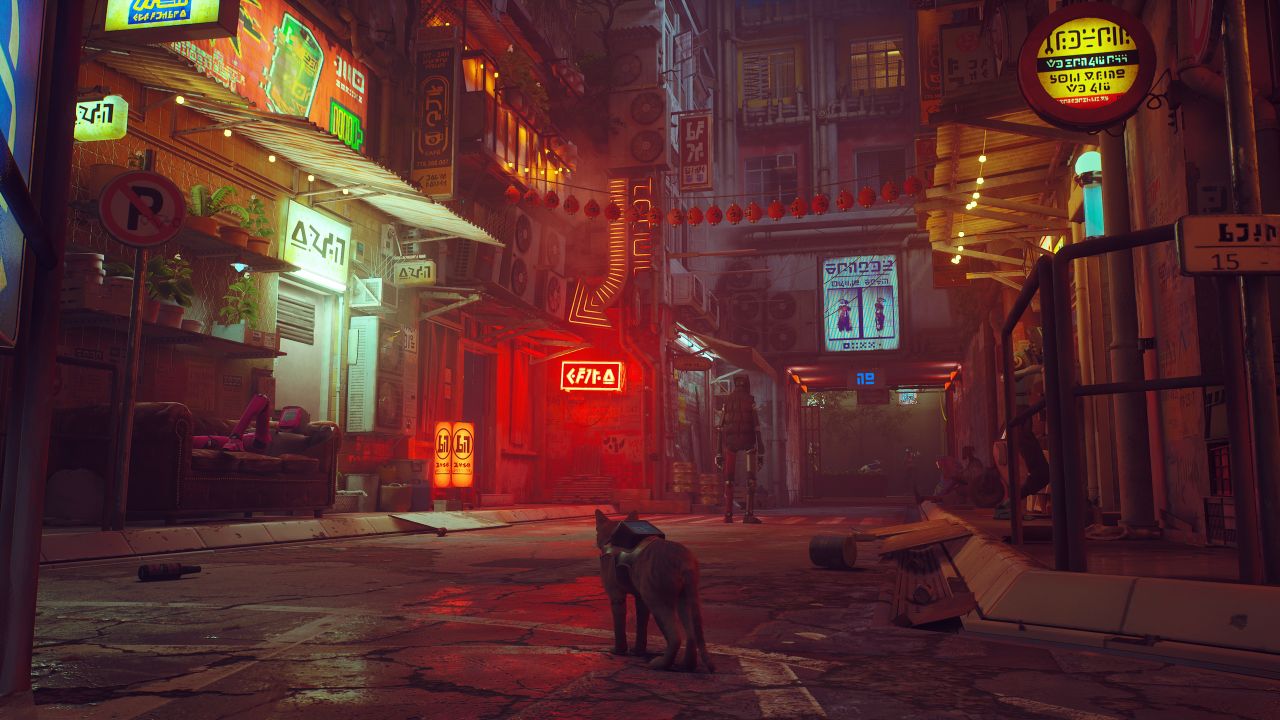 While the levels are nicely detailed, they are not exactly pushing the PS5 to its limits. The technical quality of the visuals in Stray is fairly limited. The cat's animations are just okay, and they are often not very well strung together when performing multiple jumps or actions. The lighting is nice, but the texture quality on the cat, robots, and the environment is at a basic level and often lacking in resolution. It's by no means distracting, but the point is that PS4 players should not worry about missing out on a next-gen experience. The framerate is steady, except for one small area where it took a real hit for some reason, briefly.

Stray is a fairly typical third-person adventure game, with a variety of straightforward puzzles and linear platforming sections. At $30 and around 4 hours in length, having gathered over half of the collectibles, it doesn't overstay its welcome and tells a decently engaging story with a somewhat subdued ending. But where the game stands out is in its setting. Exploring the atmospheric underground city as a cat is certainly unique, and the solid (if not particularly original) gameplay mechanics help carry this unique premise though the brisk campaign. The visuals focus more on atmosphere than next-gen power, and if you're wanting something that plays well and has a bit of an original flavor to it, Stay is a solid choice.

Our ratings for Stray on PlayStation 5 out of 100 (Ratings FAQ)
Presentation
70
The visuals and soundtrack create a nice sense of atmosphere, though from a technical standpoint it certainly looks like a lower-budget game.
Gameplay
72
The adventure and its mechanics are fairly by-the-numbers, the puzzles are straightforward and only occasional may frustrate if you miss an item.
Single Player
74
The story follows predictable beats, but the charming characters and a unique perspective on the world help it stand out. The ending feels a bit rushed.
Multiplayer
NR
None
Performance
85
No issues on PS5, apart from one small area where for some reason the framerate takes a brief dive.
Overall
72
Stray is a solid enough adventure game with archetypal mechanics and level design, elevated by its nice atmosphere and a unique perspective on the world. 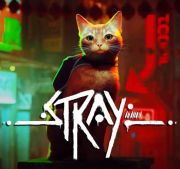 998. When the Past Was Around
Xbox One

All videos for Stray (3)
Advertisement ▼