Puzzle game design has seen a lot of change over the years. We've gone from strict, linear solutions that required many trial and error attempts, to more forgiving titles that let players guess or luck their way out of levels. But the nice thing is, there's no shortage of ingenuity among game developers that create experiences that span the entirety of the puzzle realm. The recently released Please Fix The Road is a jigsaw-like map manipulation game where players must connect two ends of a path, and it's the sort of title where only one solution will fit. 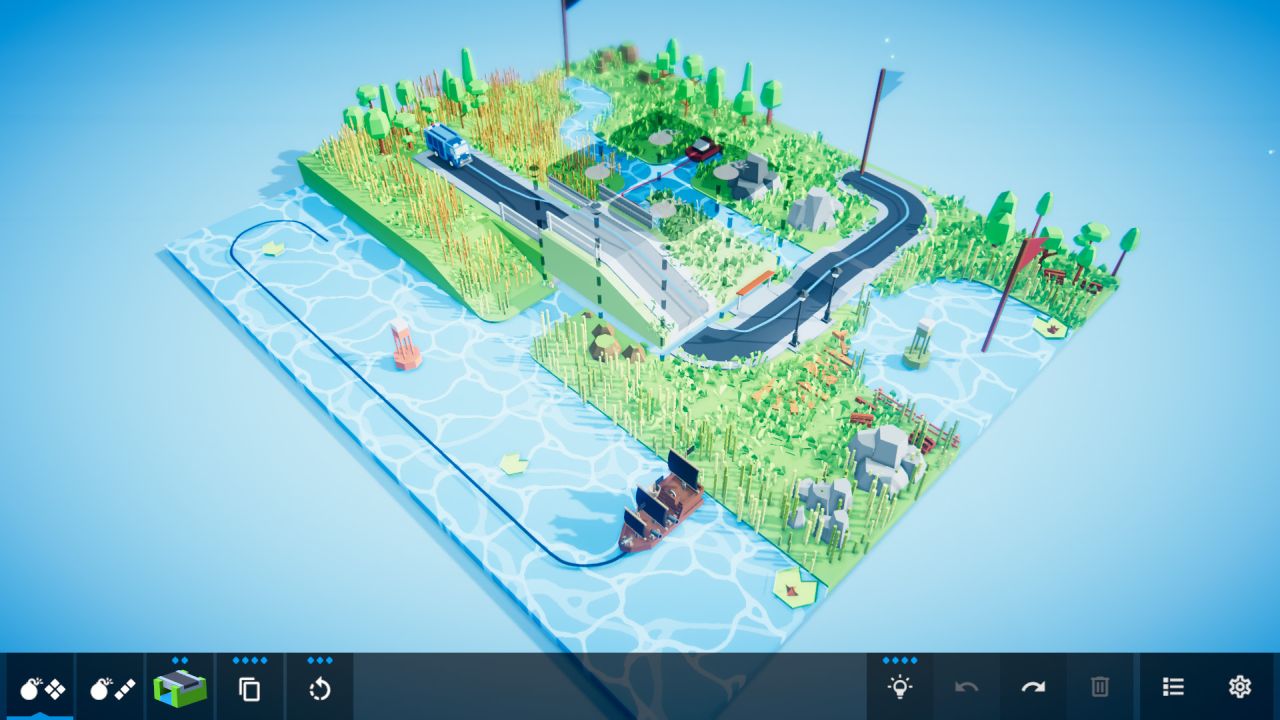 Please Fix The Road doesn't have much in the way of structure or narrative. Your objective across each of the 150 levels is to manipulate parts of a small 3D map in order to connect a road or a path, so that someone or something can cross from one end to the other. This could be a traditional paved road for a truck, a river with a boat, a path in the woods for an animal, and so on. There's nothing that ties the levels together, nor do they flow with any specific theme – you'll keep jumping between the different settings and even times of day. The campaign also doesn't bother with any typical puzzle game progress elements, such as earning stars or separating levels into blocks, and putting up unlock requirements. Instead, it's purely linear, and you can't move on to the next level without figuring out the current one.

Please Fix The Road is also a puzzle game that adheres to what some would consider to be an older design archetype. The puzzles have exactly one solution, and the steps you must take to get there are also linear and fixed, with no flexibility. Each level presents players with a section of terrain, consisting of square blocks, and a series of cursor tools (or brushes), with the requirement to connect the path / river / road / rail running across the map. You must first use the given tool correctly in order to manipulate the terrain. The tools include a specially-shaped deletion cursor, so that you must think about which parts of a level you are deleting; a copy ability with same constraints, and later tools add the ability to lower, raise, and move the terrain blocks. The tools have a specific, limited number of uses, and are used in the game-given order (i.e. you first use the destroy tool a few times, then you get the copy tool for a few uses). After that, you get to place your own sections of the road/path/river, and they again appear in a specific linear order, from straight sections, to elevated bridges, corner turns, and so on. 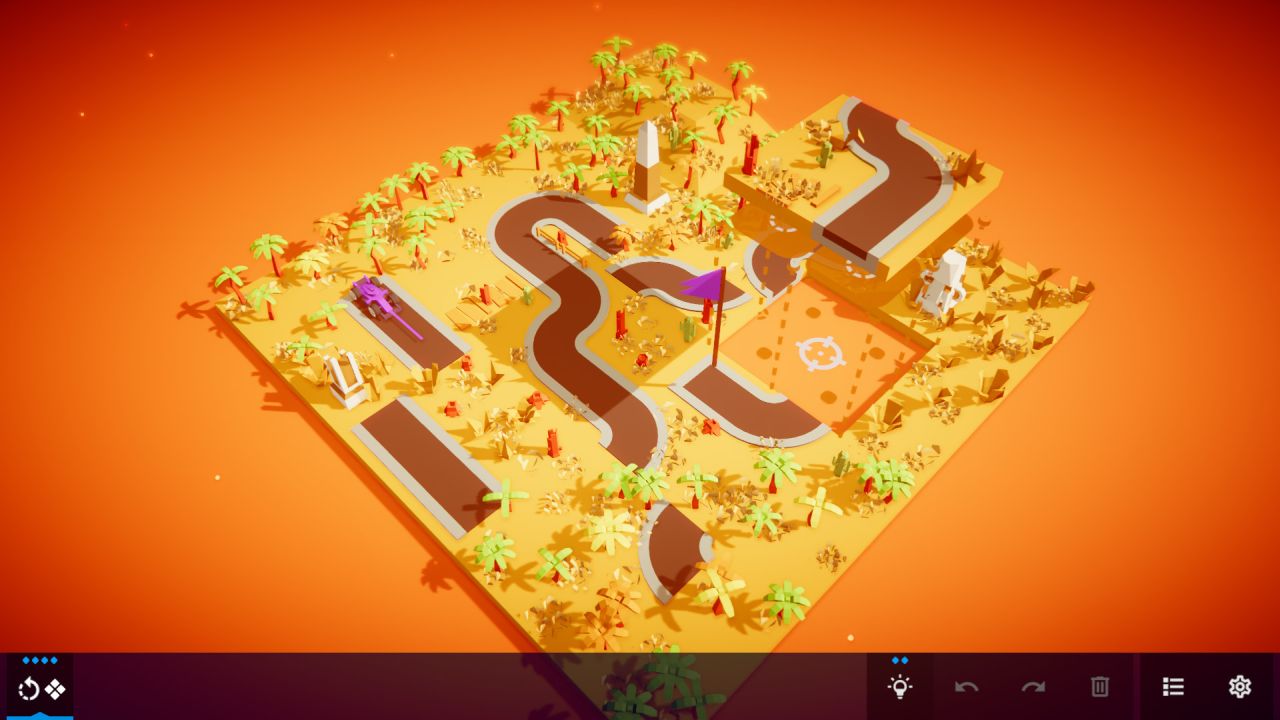 The challenge comes from figuring out the correct way to use each tool and placement given, during its fixed availability step. The tools have unique shapes, for example that delete sections of the map, so you must carefully plan ahead and consider the consequences of each manipulation. Same goes for placing the new path, as you may quickly realize you've deleted or moved the wrong blocks in the previous step. Given the exact linearity of the steps required for the solution, some players may find this type of design rigid.

To be fair, the game does allow for hints and has undo functions. It's easy to reset the level at any point once you've had a euphoric moment after making many wrong attempts. You can also ask the game to help you along, one step at a time and do the tools and road placing for you. Using hints and restarting doesn't really cost you anything – as mentioned, there's little overall structure here, so you are not losing points (there are none) or time (there is no time limit). Players start off with having to perform just a few moves, but by the end game you are using as many as six tools/placements to get to a solution. Things do get rather difficult, and while you can always move past a level with the hints system, it can still be quite a brain wracking exercise. You will also have to randomly place objects outside the level's terrain, creating your own canvas of sorts, which also takes getting used to as you are not confined as you might expect. 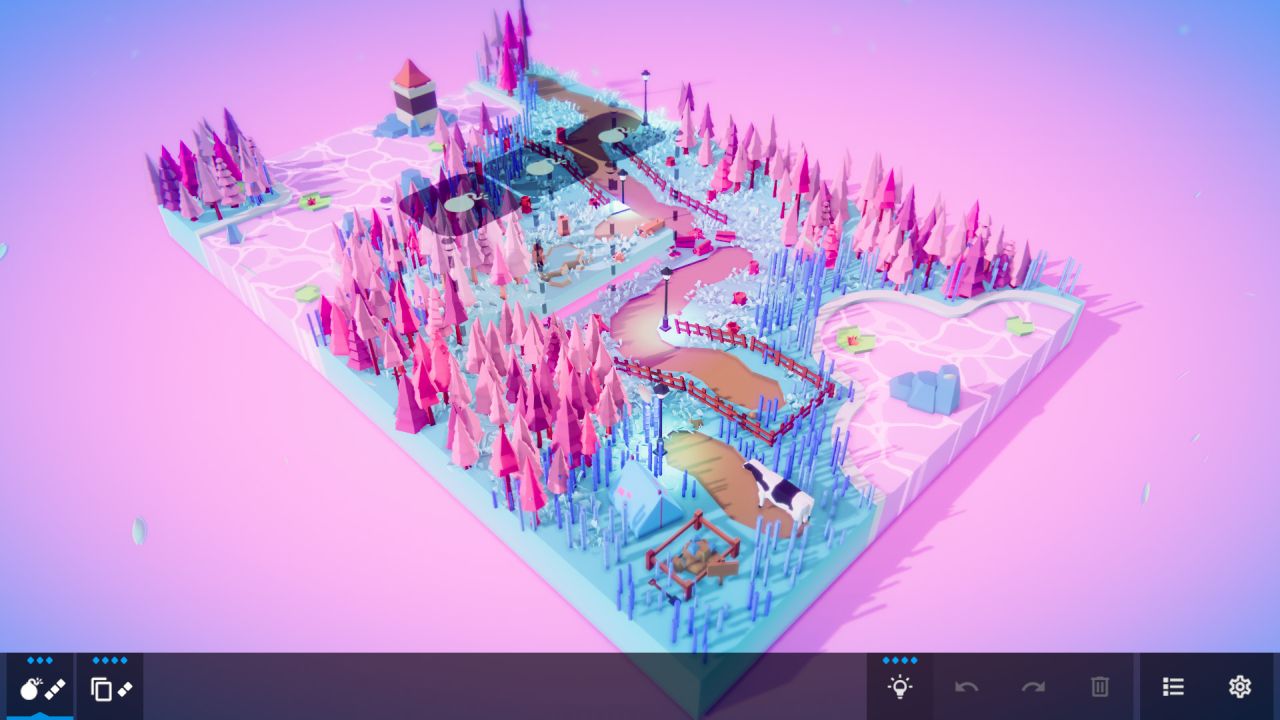 As many puzzle games these days, Please Fix The Road goes for a minimalistic presentation, which looks fairly good. It has a low polygon aesthetic, along with a very warm color palette. The levels change randomly between day and night lighting, different types of terrain and biomes, from forests to snowy plains. The transitions between levels are fairly neat as well, performing a sort of Inception-like animation. The experience is accompanied by appropriate smooth jazz-like music. The one downside to the visuals is that it can sometimes work against the game's puzzles, as it can be difficult to tell which parts of the level you need to delete, for example when a wooden trail sort of just ends and you have to figure out which square block is the actual end. The contrast can also be a bit muddled, producing similar issues. The controls are fine, and the mouse can be used for everything, including zooming in and moving the view around, though a keyboard is also supported. As expected in a game such as this, there are no performance issues.

Please Fix The Road at first seems like a fairly typical modern puzzle game. It's got the warm colors and minimalistic visual aesthetic, a straightforward progression system, and a whole bunch of levels to tackle. But it offers something that's becoming rare these days – a rigid, linear solution structure that you can't guess your way out of. Each step of using the tools and placing new paths must be deliberate, as you work towards a singular solution – making it comparable to a jigsaw puzzle design. Some may find this difficulty refreshing, while others may be a bit frustrated. The recommendation for this particular title lies in this distinction.

Our ratings for Please Fix The Road on PC out of 100 (Ratings FAQ)
Presentation
75
A warm color palette and soft musical score. The contrast could have been better, and it can be at times challenging to see where the existing roads end due to the art style.
Gameplay
70
The one-solution puzzle design may not appeal to everyone. Despite the typical minimalistic look, the puzzles are far from casual.
Single Player
65
Plenty of levels, but no real flow or cohesion to the campaign, beyond just playing through them one by one.
Multiplayer
NR
None
Performance
(Show PC Specs)
CPU: AMD Ryzen 5 3600
GPU: ASUS Radeon RX 580 8GB
RAM: 16GB DDR4
OS: Windows 10 Pro 64-bit

90
No issues
Overall
70
Please Fix The Road is an often challenging puzzle game that sticks to its stringent design, without too many bells and whistles, and should appeal to some players looking for a rather specific puzzle design experience.