The Starship Troopers movie from 1997 was anything but dull. The cheesy action flick played around with war propaganda and poked fun at the military establishment. It also romanticized an interstellar conflict against an alien species, known as Arachnids, to create something that was funny and frantic. And it had plenty of gore, with both humans and Arachnids (aka bugs) dying in plentiful numbers. Much of its dialogue was memorable too, including, “The only good bug is a dead bug” and “Service guarantees citizenship.” Starship Troopers: Terran Command is a single-player RTS adaptation of the movie, with a look and feel that is extremely faithful. Its defensive missions are a highlight, and these have players positioning units to fend off waves of spider-like bugs. Fans of the movie will like the presentation, but boring mission design, tedious micromanagement, and path-finding issues mean strategy gamers might want more. 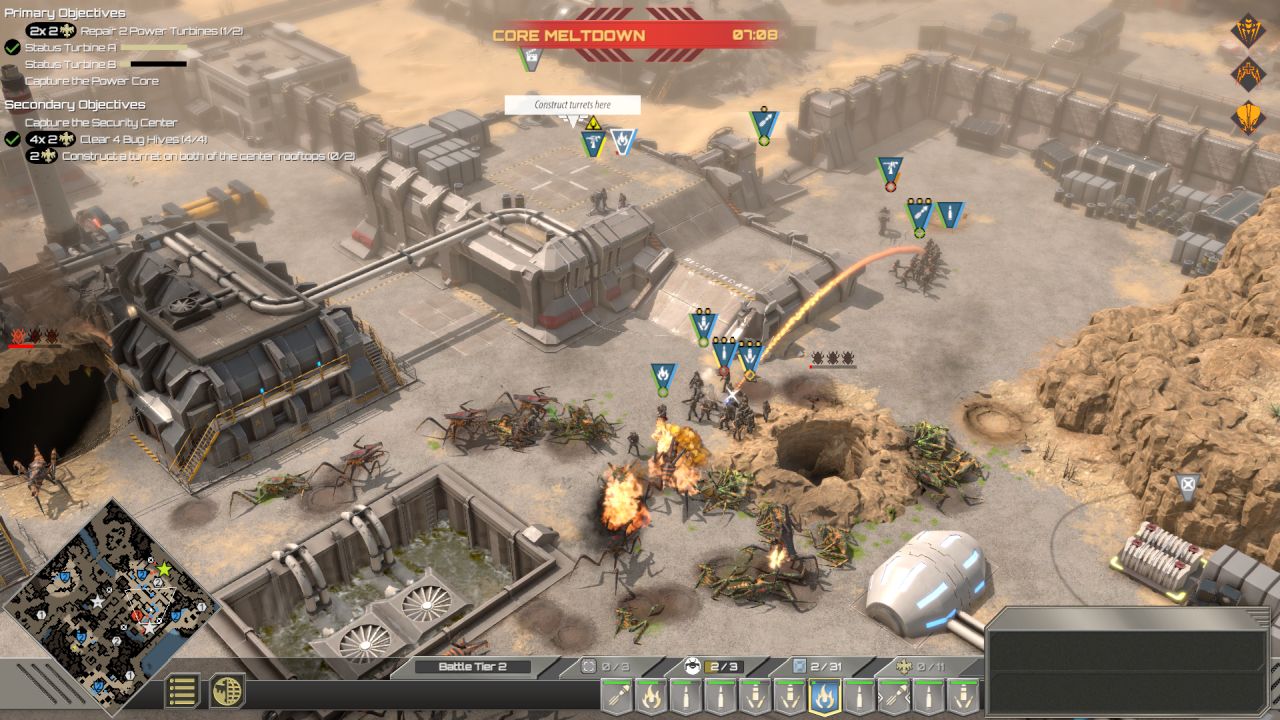 Terran Command has a thin framework. It has a tutorial mission and 19 campaign levels. There are also two additional scenario challenges, one of which would fit snugly into the campaign but is strangely separated. There is no co-op, no skirmish, no multiplayer, no map creation, and you cannot play as the Arachnid forces. The lack of these features explains why the game is half the price of a typical release. But while the content is focused narrowly, the visual design and style is no slouch. All the Arachnid forces look great, with the special bug types from the movie here in all their glory. Seeing a tanker bug lumber into a base is quite something. Even the human troopers and their respective buildings are a precise match to those from the film. And the same propaganda approach is preserved in the animated cutscenes found between missions, although sadly the story around it is not interesting.

Most of the campaign consists of taking units (squads of soldiers) and clearing hives by depleting the bug forces nearby and then entering a hole in the ground with a sufficient force. When not clearing hives, troopers capture bases across desert landscapes, which provide supplies that increase the unit cap. While both the movie and the game make it clear that the bugs have the overwhelming numbers, the game’s design is not quite on board. Every human unit can be replaced immediately after it is killed, just as long as you have dropships available and a place for them to land. Dropships are the source of all units and every controlled base has at least one landing zone. Some units can bring dropships down out in the field too, to heal squads or bring new units to the front. Most of the time you will have three dropships available, and their cooldowns are short enough to make it only a minor nuisance to recreate an entire army. Bugs can ‘capture’ bases though, if left undefended, by merely standing nearby, and this can reduce the unit cap, making it harder to regain a foothold. 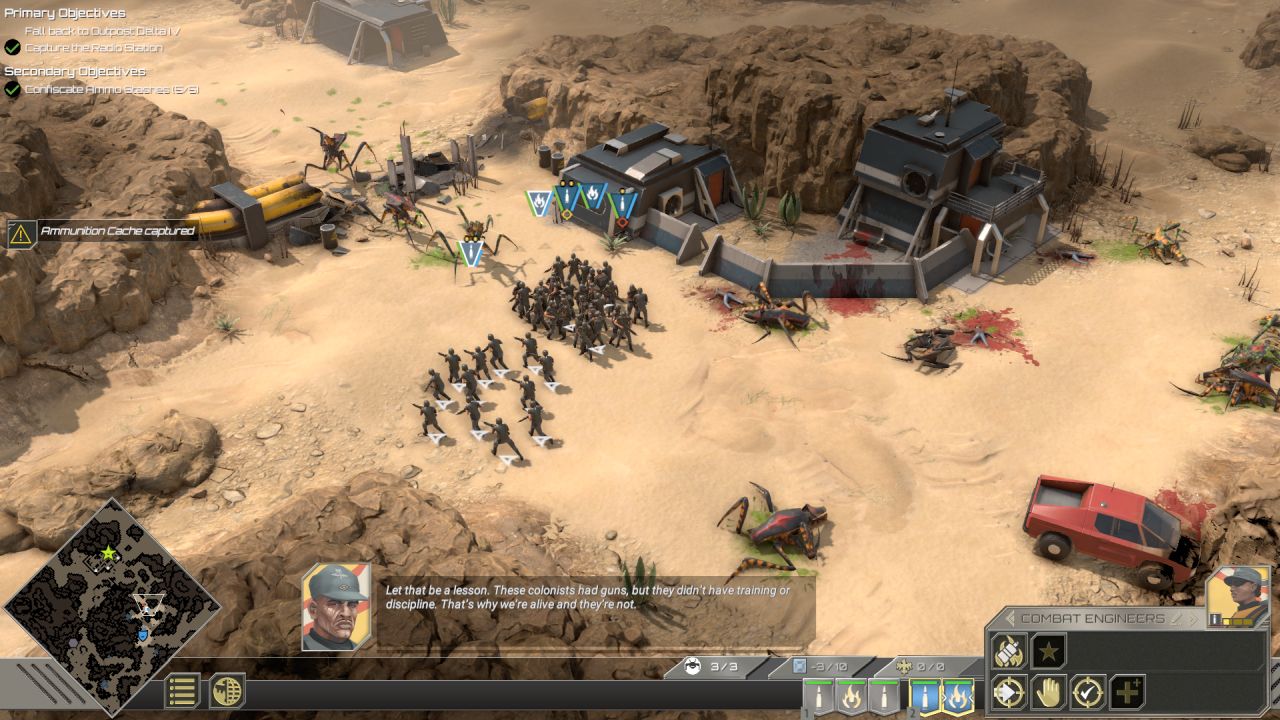 There is no base-building in the traditional sense. Some structures can be placed in preset locations, but only during missions where it has been predefined. These buildings just provide access to new types of units, so each mission is rigid and there are only a handful of situations where all units are available. The only structures that can be built freely are turrets. These can be placed anywhere on solid ground and there are three types: machine gun, grenade launcher, and rocket launcher. They can be repaired by engineers and serve as a good way to protect bases while troopers are out on the hunt.

The crux of the action involves forming the right composition of soldiers and positioning them correctly. Some bugs are armored, which means they’re basically impervious to small arms fire. Other bugs are long-range attackers or have high health. Mixing snipers, infantry, rocket troopers, and a tactical officer could be the right recipe for most encounters. But positioning forces is just as vital. Some units are better at long range; others are close-combat specialists. Friendly units cannot fire through each other either. So surrounding a hive carefully is much better than charging head on in a clustered group. Likewise, taking the high ground and making sure different units engage together optimizes the battle outcome.

Unfortunately the banality of gameplay is obvious during the first half of the campaign. The early missions are simple, boring, and the game feels limited. It just does not make the action exciting because clearing bug hives gets tedious. To clear a hive, an army enters it (slowly), there is some underwhelming gunfire, and then they exit (again, slowly) and the hive is disabled. This common task is not thrilling or fluent. Also the specific tunnel/underground missions are dull too, becoming a bad reminder of those poor interior levels in the Command & Conquer series, albeit with squads being reinforced at set points along the way. 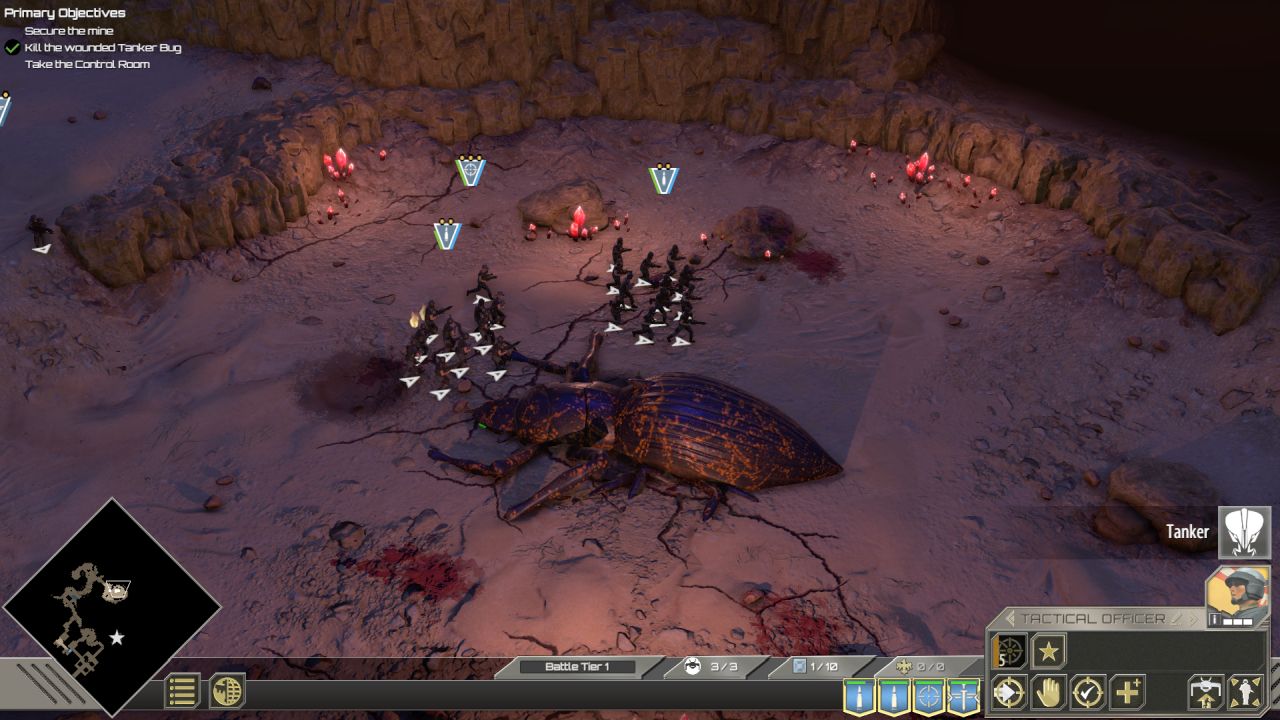 The second half of the campaign is more hyperactive, interesting, and challenging. The increase in difficulty is only part of the reason why it is more enticing. Multiple fronts need to be covered. Multiple armies are sent out in order to clear hives in a systematic fashion, or crush one via a pincer movement. The second half also features some great defensive missions, which are easily the most fun the game has to offer. Defensive missions just involve waves of bugs being sent at the player (or to a specific location) and your job is to hold out. Placing turrets and maintaining an impenetrable defensive posture is satisfying. And yet the game rarely provides enough time to set up defenses properly, limiting the enjoyment of its best feature.

Although the campaign only takes 12-14 hours to complete, it often feels like a grind. Many strategy games turn into a tug of war as two sides fight for supremacy. Here it is more monotonous. One reason for this is that hives do not change and quickly return to full capacity. So you attack a hive and nearly clear it, just before all your forces are wiped. Then you do it again with slightly better tactics and/or a different army composition. The satellite bug holes around hives cannot be destroyed, so they just spawn enemies in the same way until the primary hive is gone. The game also increases Arachnid strength, adding new special enemy types to offset any progress you make with the hives. The special bugs can be difficult to counter, especially when mixed with regular types. Scorpions are the trickiest, due to their high armor and long-range rail-gun like attacks.

Bad unit path-finding is always a problem. Friendly troops get stuck on each other and the environment regularly. Armies can be moved in formation (a bit like Supreme Commander), and this usually keeps an okay structure, but it can result in a lot of weird situations. Units turn backwards and bump into each other to create a traffic jam. Some will go alone via a different route, becoming easy pickings for enemy bugs. And squads also can get jumbled inside each other, which means they cannot attack properly. The path-finding issues are a constant problem, but become almost game-breaking during a handful of missions that take place in a city location. And since the camera cannot be rotated to better see behind buildings, the problem cannot be alleviated. Often you need to take direct control, just to minimize the issues from moving units. 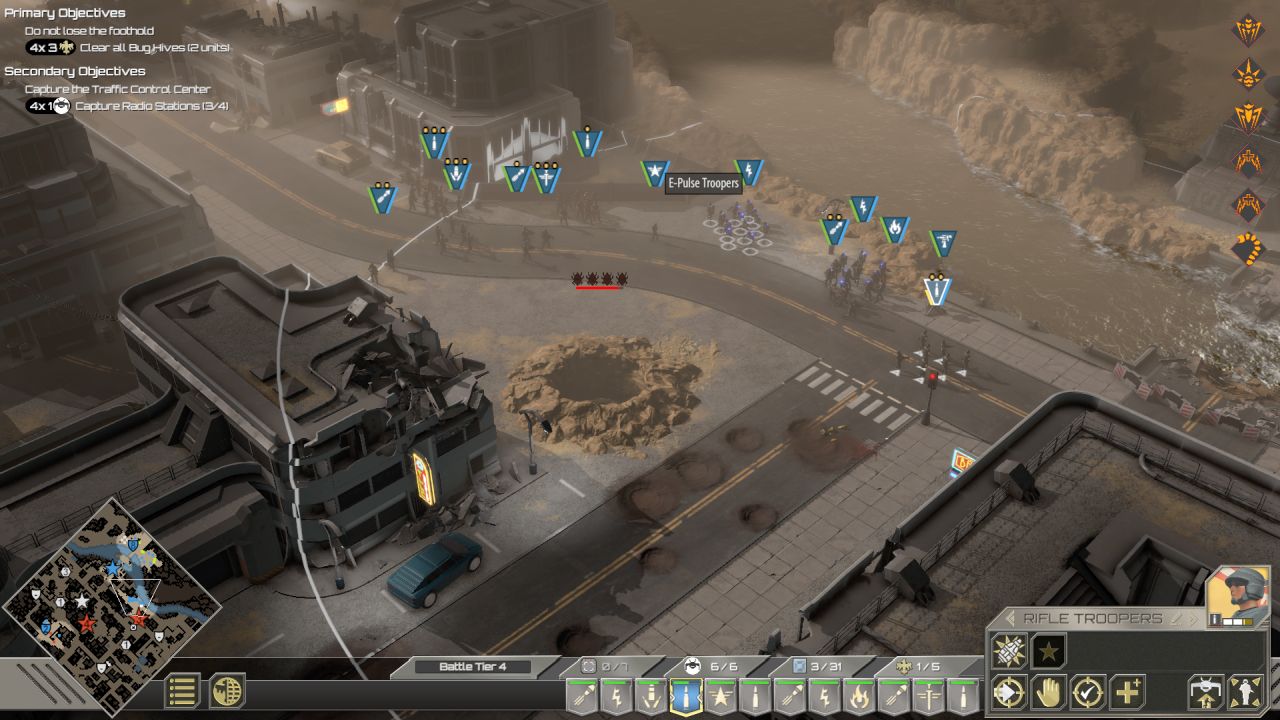 Micromanagement is a headache in certain missions. As mentioned, some enemy types are armored and only certain troops are effective against them. Scorpions can be taken down by a few rocket troopers, but these units do not prioritize targets, so you have to force them to engage manually every single time. Snipers counter spitter bugs well, but again they’ll happily kill regular bugs instead because they’re closer. Elite skills (unlocked after units gain enough experience) are almost all manually deployed, and many force units to move, creating more of a positioning nightmare. Assigning units to groups, via the number keys, is essential to have more intricate control during the rapid bug attacks. In addition, all units (except mech-like marauders, for some reason) do not attack when moving, unless it’s via attack-move. This attack-move is the best option nearly always, so it should have been the default. When you add in needing to heal units via dropships, tactical officers boosting friendly soldiers, and manual turret repair, it becomes hard to just enjoy killing bugs.

While the vast majority of bugs are the ones you kill, there are a few technical issues. Apart from the path-finding troubles, there are some strange HUD problems. Icons for units sometimes jumped around and ended up in the wrong place. Clicking on some of the buttons sometimes did not work the first time. And there were a few missions where enemy numbers (mostly Scorpions) seemed grossly excessive around hives, as though the game spawned more than a fair share. For the most part the game runs well on high settings, although there were a few slowdowns during missions with high bug numbers. Load times were a little long on an SSD but not too bad. Like old-school RTS games, there are manual saves and many autosaves, so you will rarely lose much progress during the bug grind. 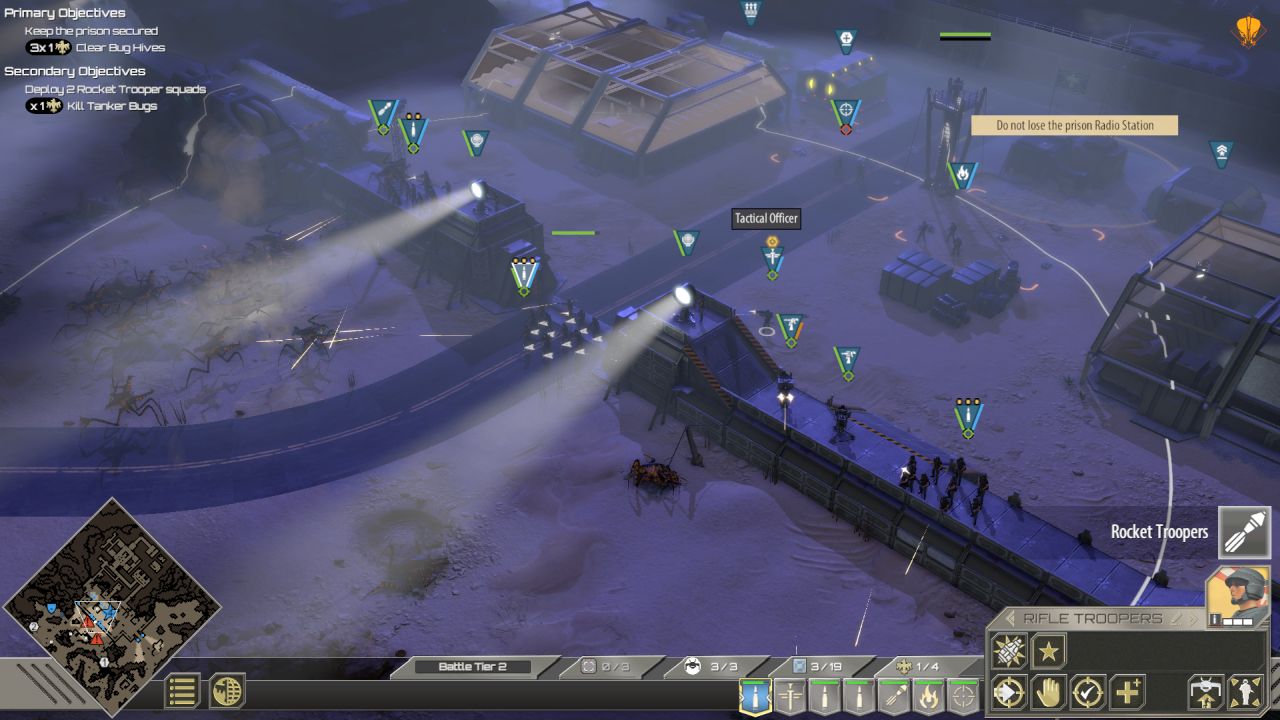 Terran Command is a decent adaption of the 1997 movie but not a particularly great RTS game. It has recreated the visual style, and it is awesome to see the bugs from the top-down perspective. Many of the game’s defensive missions are fun, as you position units and turrets to survive waves of bug attacks. But the campaign does not have enough of these sequences, and the first half consists of pretty dull missions. There are also terrible path-finding issues and too much micromanagement. Fans of the movie will probably enjoy Starship Troopers: Terran Command, but those looking for a robust strategy component will find some problems under the surface.

Our ratings for Starship Troopers: Terran Command on PC out of 100 (Ratings FAQ)
Presentation
80
An excellent recreation of the movie in almost all areas. All the bugs look great, troopers are faithful, and the planet locations look decent too.
Gameplay
65
Occasionally there is some good tactics. Positioning units and setting up defensive fortifications is the most enjoyable part. Dealing with enemy units via micromanagement and clearing the same hives gets tiring though.
Single Player
50
The campaign has many dull missions across 12-14 hours. There is also a lot of grind due to the hive locations and tougher enemy types. While the propaganda is nice, the story is not interesting and the campaign is not worth replaying.
Multiplayer
NR
N/A
Performance
(Show PC Specs)
CPU: AMD Ryzen 5 3600
GPU: XFX RX 480 GTR Black 8GB
RAM: 16GB DDR4
OS: Windows 10 Pro 64-bit

75
Runs well, although there are a few UI bugs and load times can be a little long on an SSD.
Overall
63
Although faithful to the 1997 movie, Starship Troopers: Terran Command as an RTS is not consistently enjoyable. Despite some good defensive sequences, its path-finding issues, bland missions, and excessive micromanagement bury some of the fun. 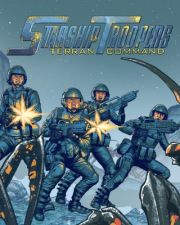