There are a plethora of Mario sports titles, but much like the mystery blocks found in the Mushroom Kingdom, you never quite know if something good or mediocre will pop out when it's cracked open. Perhaps the game that most hit a chord with fans was Strikers, as it brought outrageously addictive action, over-the-top hilarious reactions, and almost a rock-star exterior, which since has never been replicated in the Mario games. After a fifteen-year stint away, the mustachioed hero has finally cleaned off his old soccer boots and returned to the pitch for Nintendo Switch. 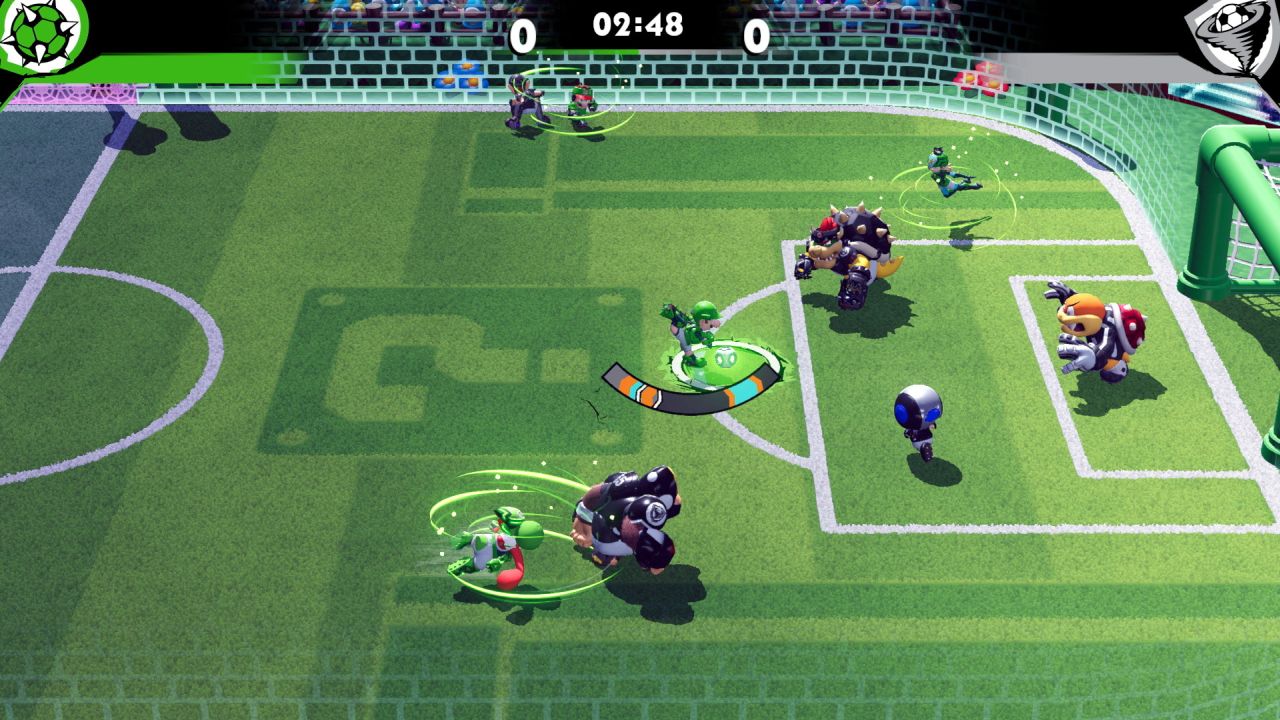 For those who've never played a Strikers game before, it started life back on GameCube with Super Mario Strikers, with a sequel two years later on the Wii called Mario Strikers Charged. The latest installment, Battle League, plays remarkably similar to its predecessors; the aim is to kick the ball into the opponent's goal. However, how you create opportunities to score these goals can vary, from mastering the core movements to taking matters into your own hands using mischievous tactics.

Battle League is a 5v5 soccer game, although you never assume control of the goalkeeper, which by default is a Boom-Boom, so in reality, it's best described as a 4v4 game. There are ten playable characters with the main culprits you would expect, including Mario, Luigi, Peach and Bowser. Each character inhabits different stats, determining how they perform on the field. Mario is well-balanced and can adapt to most situations, Roselina's raw shooting ability will cause trouble for any goalkeeper, and Bowser is built like a tank with his strength stats, making him hard to knock down.

On the gameplay front, it's fantastic and is truly a blast to play, especially with friends. The fundamental mechanics like passing, dashing and shooting are incredibly straightforward to perform, and within a matter of moments, the action will raise your pulse as you start dribbling the ball down the pitch as slick as a whistle. At the same time, there is a deeper level of the mechanics, which can dramatically change the tempo of each match. Don't get me wrong, not for a second am I implying that this soccer experience is as sophisticated as EA FIFA's mechanics; it's not trying to be. But if you want to start beating adversaries, especially in higher-level matchups, it will require you to master the controls.

For instance, performing a charge shot, which is executed by holding down the A button, is a great way to achieve a more powerful kick, which will be far harder for the AI goalkeeper to stop. The downside of using this method is while you are waiting for the shot to get juice, your character is left vulnerable and is wide open to assaults from the enemy team. This will leave you continuously in dilemmas where you'll have to adapt to the situation in a split second; is the enemy team in proximity to interrupt my shot, or should I pass the ball to a fellow teammate and attempt to create an opening elsewhere? 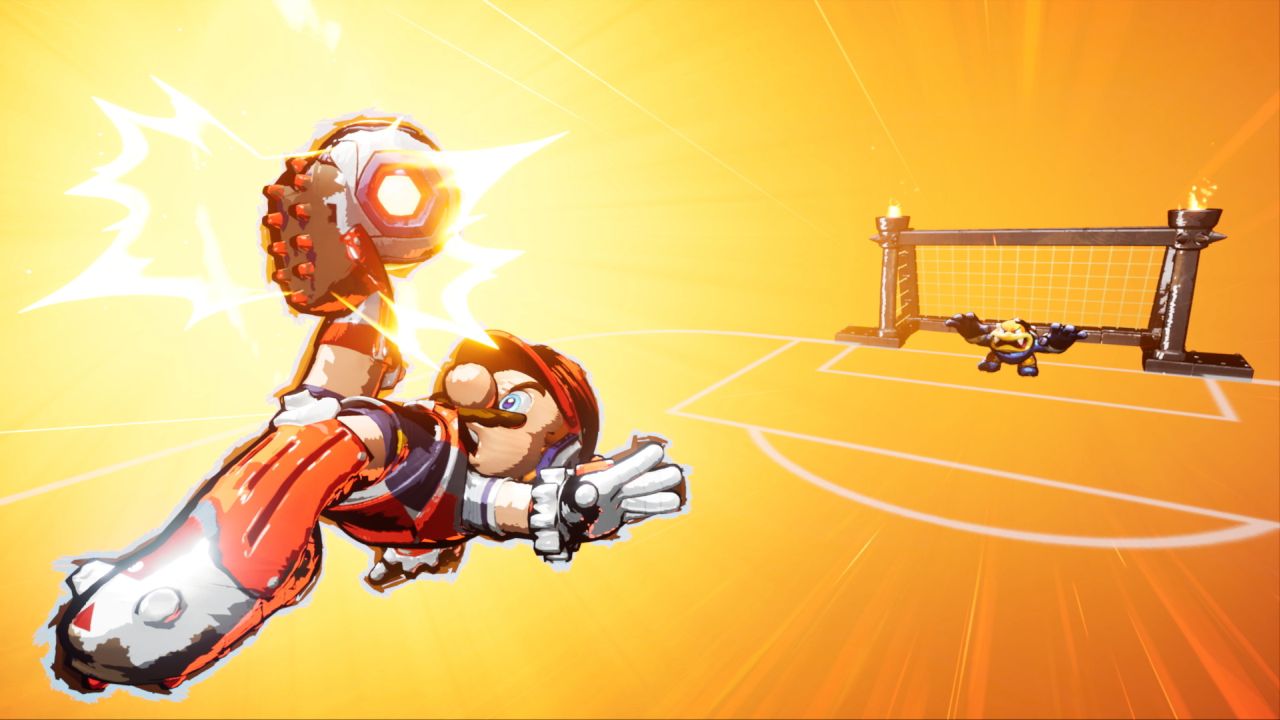 Another crucial action to grasp will be tackling, as you can ruthlessly knock down an opposing team member to take possession of the ball without facing any repercussions, as there are no penalties. It's extremely amusing to shove your enemies into the pitch's electric fence unmercifully, or be a sneaky rascal and tackle the opposing team squad without any reason. Luckily, if you're the one receiving the incoming hostility, you can counter manoeuvre these tackles; if you execute dodges correctly. This element adds a dynamic layer of chaotic fun to each match, as it's a no-holds-barred dogfight to win.

At different points of the match, the crowd will throw blocks onto the pitch that will contain power-ups. These can change the tide of battle, as using these power-ups can cause aftershocks throughout the whole stadium from the pure carnage it unleashes. The highlights are the classic red shell, locking onto the closest target and brutally knocking them down, alongside the Bob-omb that will blast away any opponents that come in contact with it into smithereens.

A further element of each match is successfully executing Hyper Strikes. Every character has a special move they can perform once their team grabs a strike-orb that drops onto the pitch during the game. Hyper Strikes are powerful shots with status effects that use the character's unique abilities to send the ball rocketing towards the goal. Unlike regular goals, Hyper Strikes are worth two points, making them a game-changer if executed correctly. This is easier said than done, as they will require you to timely input two button prompts.

The animation for the Hyper Strikes themselves is very entertaining and is definitely when we get a glimpse of the rock-star attitude that is well-known in the Strikers series. The Hyper Strike for the original Plumber himself will see him perform an overhead bicycle kick, creating a blistering fire swirl that will blaze its way through the stadium, setting alight anything in its path. Likewise, the Hyper Strike for Donkey Kong will see him jump high up in the arena and then slap down his hands vigorously; this, in turn, produces a tremendous push force that ripples through the surrounding area sending all nearby adversaries flying.

You can gain coins from winning matches, which can then be used to invest in new gear. Not only will it change the cosmetic appearance of your character, but it will also alter that character's traits. So, for example, if you want Mario to be your top goalscorer who would give Harry Kane a run for the Golden Boot award, you can buy gear that will boost his shooting qualities. This is a great way to encourage you to keep playing, as gaining coins will allow you to customise your favourite characters into the ultimate dream team.

Despite this, the previous title actually featured more characters than Battle League, which is a peculiar choice considering Charged came out over fifteen years ago. Fortunately, Nintendo has already confirmed free post-launch updates, including new characters, so hopefully, it will overtake the previous game's character roster in time, but it's hard not to feel the game is somewhat half-baked because of this. 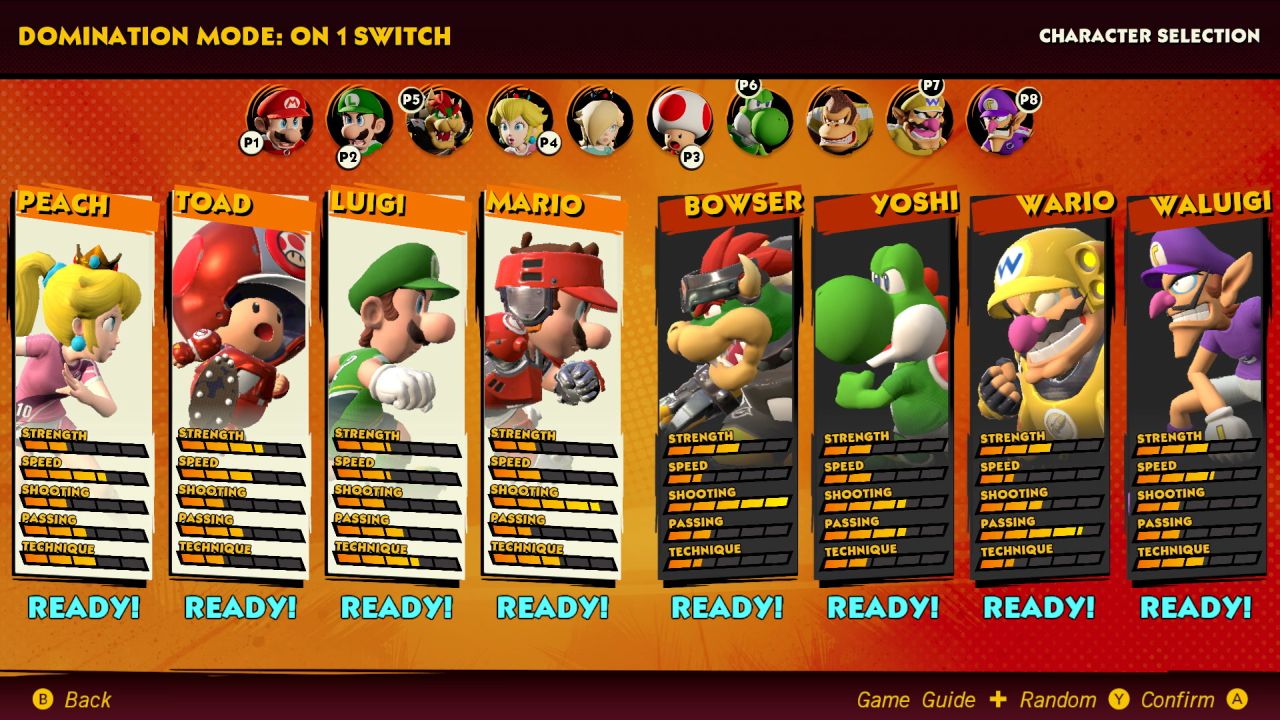 Visually, Battle League is an excellent-looking Switch game and is definitely on par with Next Level Games' other Switch title, Luigi's Mansion 3. It's easy to keep an eye on all the characters moving across the screen, which is highly important in a game where numerous things are happening simultaneously. What also helps Battle League stand out is when a development unfolds, there will be short outtakes of the character reacting to the situation. These snap bites are bursting with personality and do an excellent job capturing comical moments, from Yoshi running on top of the ball in sheer delight from accomplishing a goal to Bowser breathing a trail of fire in outrage from the opposing team scoring. Unfortunately, the backdrops for the level designs are somewhat lacking, as you only have five stadiums. Just like the character roster, this felt like a step backwards.

The single-player experience is, for the most part, very bare on content. When you start the game, you have Quick Battle, allowing you to set up a match against the CPU, and Cup Battle, a tournament-style layout where individual teams will face off against each other. The Cup Battle is the more interesting mode, as you will win or lose by your track record, not because of one lousy match. Each team participating will begin with two lives; after losing two games, the team will be eliminated from the competition. After beating every cup in this mode, you will unlock Galactic Mode, in which you will compete in every cup again but in a more challenging setting. Ultimately, there is not much replay value here, and although Galactic Mode proposes a dastardly difficulty spike, it's just a rehash of the Cup Battle mode.

The single-player side may be lacking, but the multiplayer parts will undoubtedly be the aspect that will keep players coming back, as it's a great party game to play with family and friends due to its wacky but high-energy nature. You can play online by either challenging random opponents, taking your friends head-on in a direct match or teaming up with them against other players online. Considering the Switch has a reputation for sluggish online facilities, I didn't encounter any latency issues while playing and could find matches within a reasonable time. Although the season has yet to begin, there will also be a Strikers Clubs mode, where you can form a team online and enlist up to twenty players into your club as you compete in a league.

Regarding local play, on a Switch, you can play a Quick Battle match with up to eight players in a game, meaning the only CPU in that match will be the goalkeeper. Whereas if you want to play by local wireless, you will need four consoles, meaning two people will have to play on a single Switch. It's a shame four players can't play a match online on a Switch because only needing to worry about two consoles would have been far more manageable. 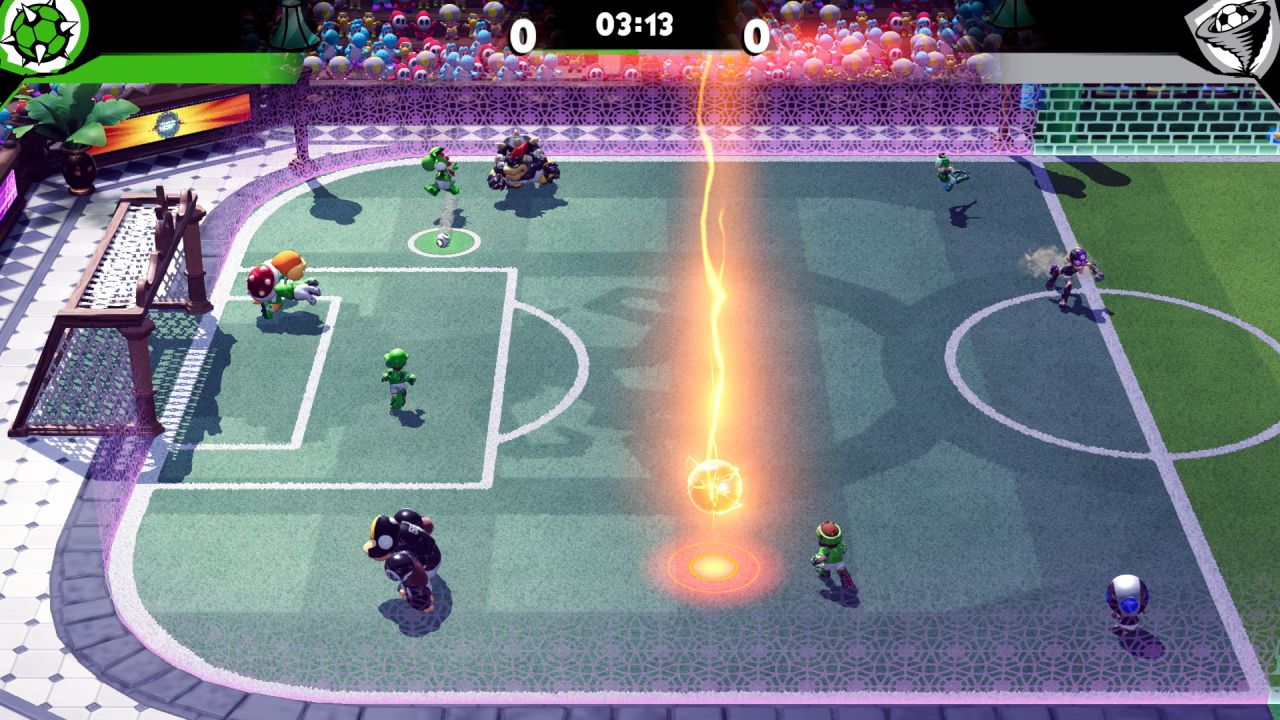 Mario Strikers: Battle League embodies fast-paced action, devious tactics, and above all, a simple but fun party game to play with family and friends. Sadly, at the time of launch, the character roster and the available stadium backdrops are seriously underwhelming, especially when you weigh up the full retail asking price. That being said, it's excellent to see Mario Strikers back on a modern system, and if you're on the hunt for a new party game to add to your Switch collection, Mario Strikers: Battle League will offer a grisly treat.

Our ratings for Mario Strikers: Battle League on Switch out of 100 (Ratings FAQ)
Presentation
80
Battle League looks fantastic for a Switch title and is on the same level as Luigi's Mansion 3 in terms of aesthetics. In addition, it was extremely easy to keep track of all the action on the field.
Gameplay
82
The action will get you hooked within a few moments as it's easy to pick up a joy-con and start playing.
Single Player
45
There is not much replay value across a few simple modes with different competitive structures. Furthermore, the lack of characters and stadiums is disappointing.
Multiplayer
80
The multiplayer will be the aspect that keeps bringing players back to the game as it's fun, chaotic mayhem to play with friends. During my time online, it was reasonably quick to find online opponents, with no latency issue occurring.
Performance
90
No performance issues were observed on offline or online play.
Overall
75
Mario Strikers: Battle League tears up the rule book of what you might expect in a traditional soccer experience and injects personality, outlandish action and mischievous tactics into the gameplay - though it could have used more content. 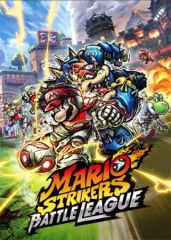