Gibbon: Beyond the Trees Review

A minimalist game that tries to spread awareness

When the slowdown occurs throughout the year in the gaming release calendar, fans are usually able to rely on indies to fill that downtime. But as expectations on the indie market continue to grow and lead to longer development times, it seems a new batch of games have emerged to take up their mantle – ports of mobile games. Whether you're playing on home consoles or PC, there's been a big increase on the amount of simple, mobile-focused titles that get ported over. Sometimes, they are just a direct move with little effort being made to adapt to the new platforms, and at other times they are improved and polished when making the jump. Gibbon: Beyond the Trees is another title of a mobile experience that has now been ported to Switch and PC, and while the game tries to carry a heartfelt message about nature conservation, its impact is diluted by bland mechanics and a lack of variety. 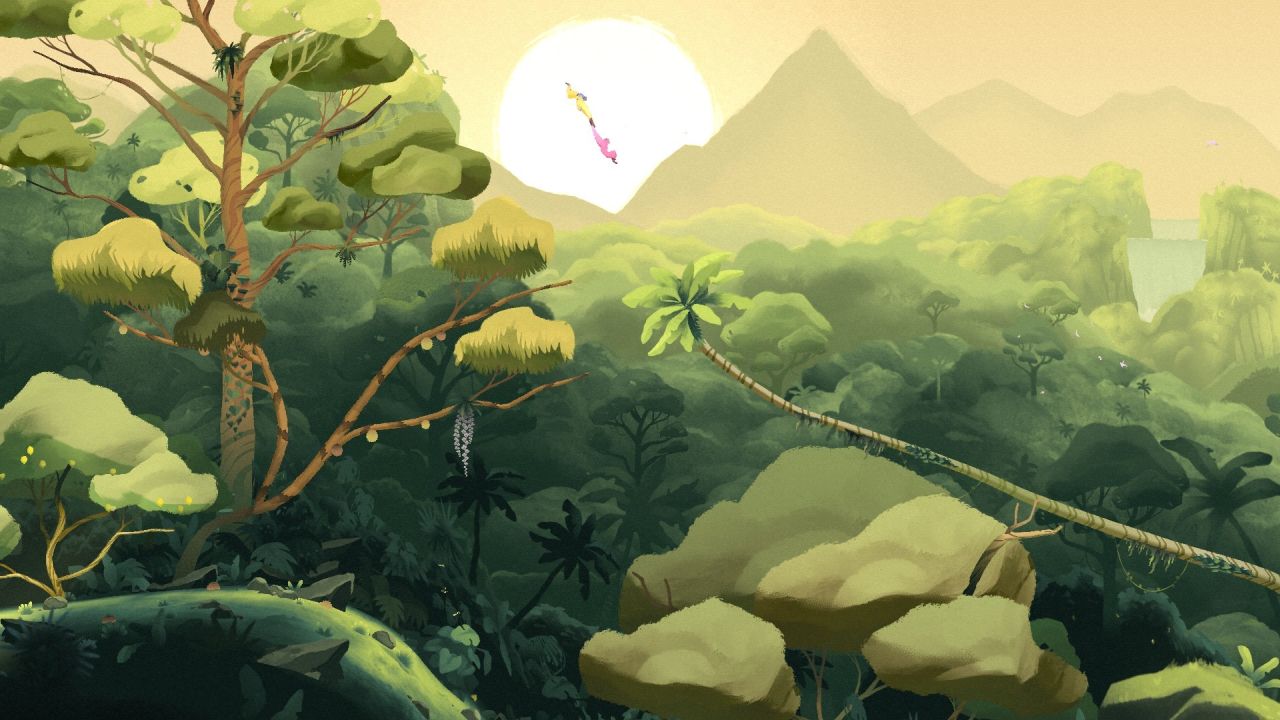 Beyond the Trees is a pseudo endless-runner, 2D platformer game where players meet and control the titular gibbon monkey. It seems to be living a happy life in the forest, as we follow it swinging through trees and occasionally meeting up with another gibbon and its baby. However, things take a predictably dark turn, as we observe humans slowly making their way into the habitat. First as simple villagers, as you swing through their small settlements, eventually giving way to harvesting machinery that gets increasingly destructive towards the forest. As you keep swinging along, the scenery continues to evolve, with trees soon becoming infrequent and the forest catching fire all around. The gibbons also find themselves having to escape gunfire, and some other dramatic moments.

The story is fairly minimalistic and doesn't use any text, presenting players with the changing levels and backgrounds to tell its story of human exploitation of the forest. It's far from an original concept, but it never hurts for a game to remind us about the events that are hurting our planet and its animals. The art style is pleasing, showing good contrast between the peaceful trees at the start, their eventual demise, and the more harsh visuals of machinery. Animations are also surprisingly good, with the gibbons swinging through the trees with good flow and grace. The music is basic, but the soundscape is filled with jungle and gibbon sounds, creating a nice atmosphere. The 2D camera view dynamically adjusts as needed in typical fashion, between a zoomed-in view and the wider shots when you perform long distance jumps to showcase the background vistas. The menus are less pleasing, with a typical mobile UI layout that's rather minimalistic. As expected, the game's simple nature means no performance problems. 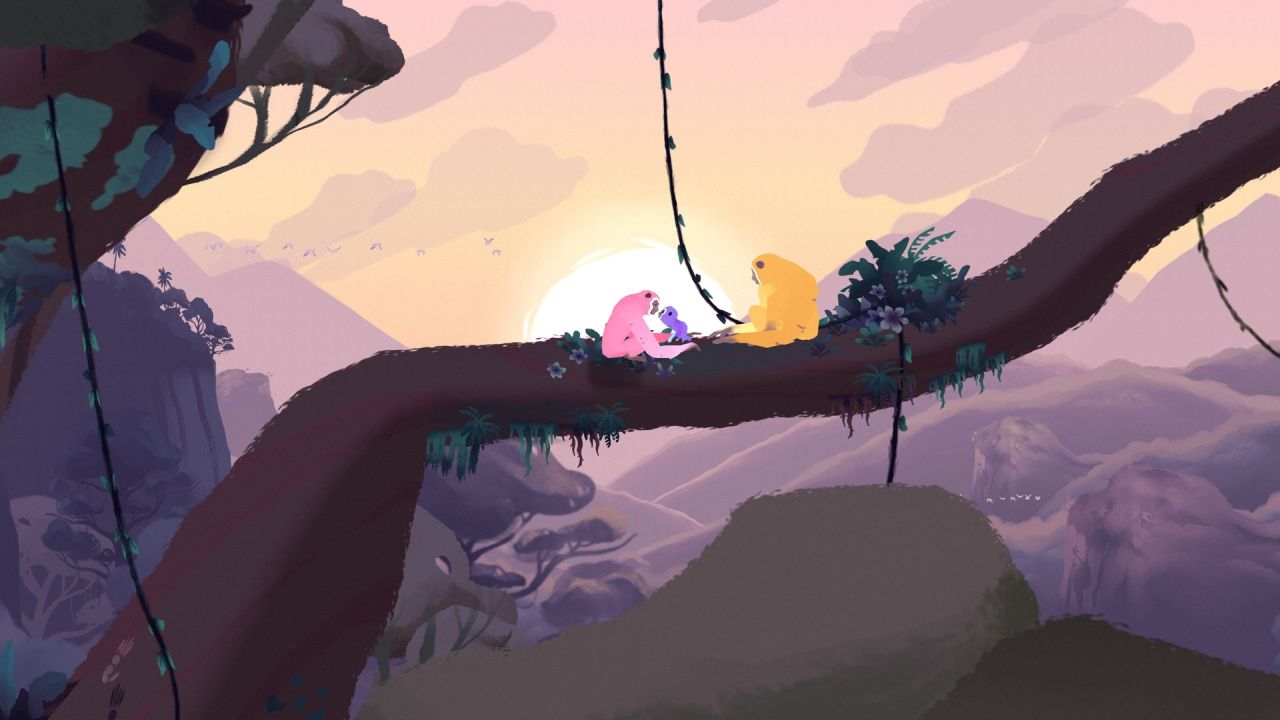 As a basic platformer, the gameplay in Beyond the Trees is rather straightforward. You only have two real inputs – by pressing a key, the gibbon will either run or swing. By holding the run button, you'll gallop forward and perform slides whether across tree branches, rooftops, or the ground. By holding the swing button, you will observe the gibbon hang and swing under the branches instead. Both a keyboard and a controller are supported for input, and you are only ever moving from left to right. That's pretty much all that players have to do – though the game refuses to be a mindless/relaxing experience and tries to introduce concepts that keep players on alert, which sort of works against it.

Beyond just run/swing options, players actually have to keep tabs on their momentum. While swinging or running forward by holding the button, players need to let go of this button when they get to the end of each branch, which sends you jumping and keeps up the speed. If you keep just holding the button, the gibbon will slow down significantly and awkwardly. You'll need to maintain speed not just for smooth traversal, but also to overcome eventual dangers, such as having to leap over huge waterfalls, or fire on the forest floor, and eventually dodging gunfire. Failing resets you back a few minutes, to try the jump again. It seems counterintuitive to criticise a game for not being very simple, but sometimes that's exactly what mobile ports such as this need to be – tell a minimalistic story in a pretty world with straightforward and smooth player interactions. Instead, you have to worry about keeping the momentum and possible dangers. 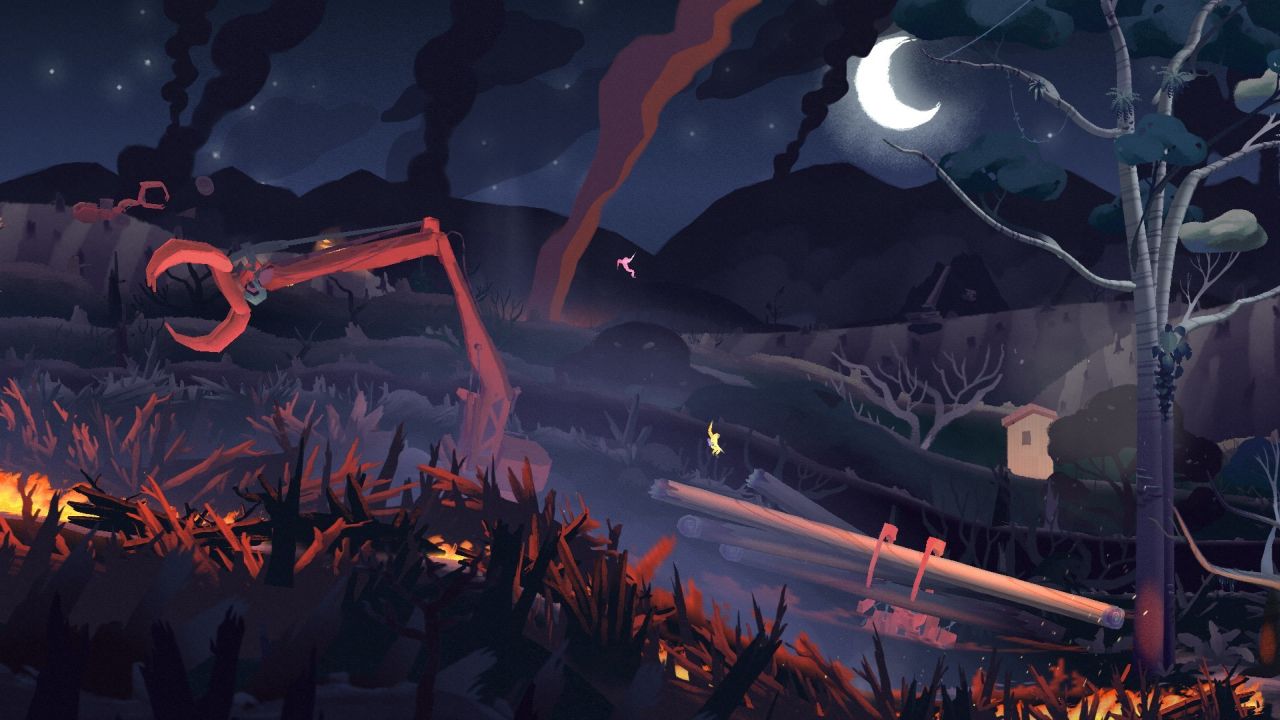 This leads to perhaps the biggest issue with the experience - its pacing. As is sometimes the case with films, the game is only about an hour long, but it feels like well over two hours. The problem is that precious little happens for long stretches, as you simply swing through the forest for 5-10 minutes at a time, which starts to feel like an eternity. This is tied into the lack of variety in gameplay. You will be holding the run/swing button for the entire duration, and constantly letting go to perform jumps. That's all there is to the game – there are no new mechanics that ever get introduced, and nothing that changes up the pace or controls. Sure, you can do a backflip, or sometimes press the swing button again to do a move with a friendly AI gibbon to catapult you forward, but these are simple optional moves that give you a bit more speed. You're never against the clock, there are no scores to track, no sense of progression, no combos or tricks, or changes to difficulty. The experience is exactly the same at the start as it is at the end. It's a simple mobile game port, yes, but it feels very repetitive due to positioning itself in a weird spot between a simple runner and a platformer.

After finishing the story, a new Liberation mode is unlocked. In this mode, players swing through rapidly changing environments and get an occasional popup objective to rescue an animal, which simply means picking them up when you swing/run by. While the mode is essentially a mini-sized version of the campaign experience, with the background and trees changing quickly through all those you've already seen in the campaign, even here the pacing is an issue. It takes 3 minutes of mindless swinging for your first animal rescue target to pop up ahead, which just makes for a dull time. You then keep repeating this mode, as it cycles the stages from the campaign, until you've picked up all target animals. 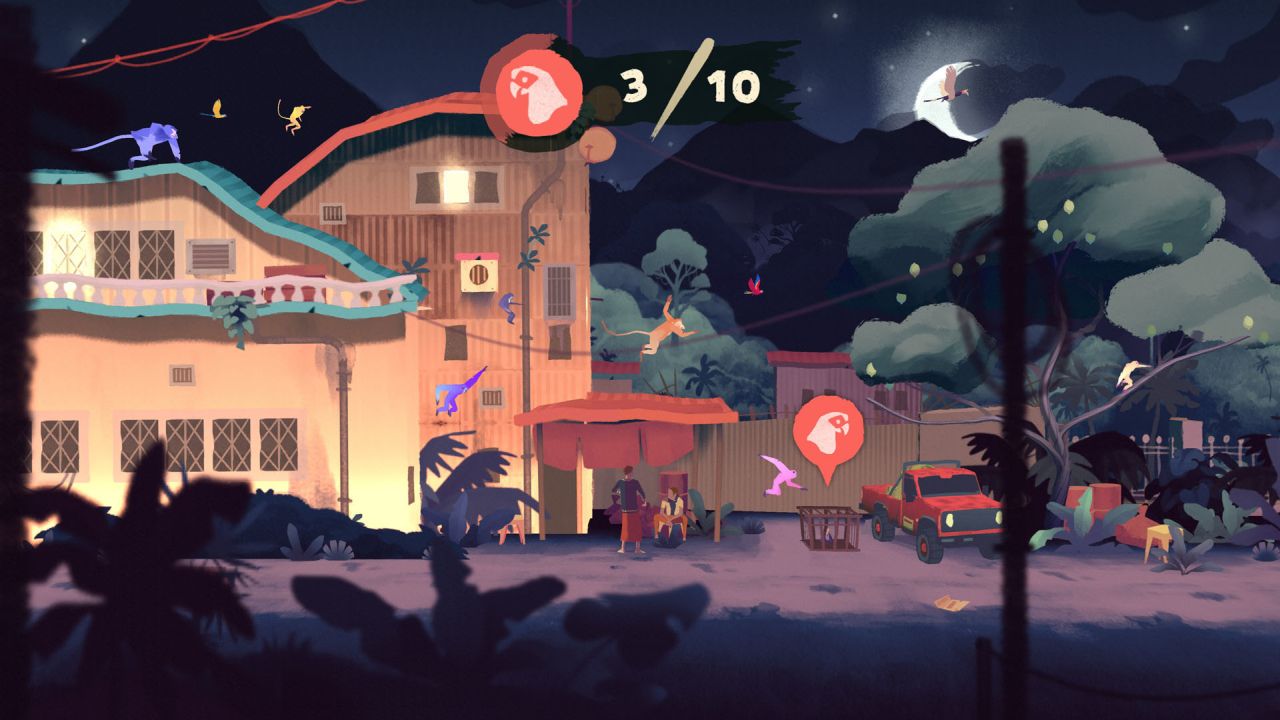 Gibbon: Beyond the Trees had noble intentions, but the end result lets it down. The developers wanted to send a message of animal and nature conservation, which while not particularly original in its execution, nonetheless had potential to be effective. The art style and audio design are well put together, as are the animations, though the UI is rather barebones and gives away its mobile game origins – though at least it runs well on PC. Unfortunately, the initially tranquil setting and simple gameplay eventually become too drawn out and repetitive to remain engaging. There's just not enough variety to the mechanics and not enough gameplay elements to keep players entertained for its brief runtime, making the game feel much longer than it actually is. The extra Liberation mode is more of the same under a different guise. For around $10, Gibbon: Beyond the Trees is not the worst value out there, and perhaps can be recommended if the environmental message really appeals to you. But its dull gameplay and poor pacing are unlikely to bring you back for another round.

Our ratings for Gibbon: Beyond the Trees on PC out of 100 (Ratings FAQ)
Presentation
70
The game's limited scope and budget are obvious, but it looks good for what it is.
Gameplay
50
The one-note mechanics become repetitive very quickly, and the game doesn't evolve beyond the basics.
Single Player
40
The story is brief, but feels twice is long because the pacing is very sluggish and the gameplay doesn't do it any favors.
Multiplayer
NR
None
Performance
(Show PC Specs)
CPU: AMD Ryzen 5 3600
GPU: ASUS Radeon RX 580 8GB
RAM: 16GB DDR4
OS: Windows 10 Pro 64-bit

85
Aside from awkward mobile-style UI, no issues.
Overall
50
Gibbon: Beyond the Trees has a noble cause, to bring attention to the issue of animal conservation and human impact on the planet. And while it looks fairly good in doing so, the repetitive gameplay and sluggish pacing prevents this adventure from making any big leaps.

Gibbon: Beyond the Trees 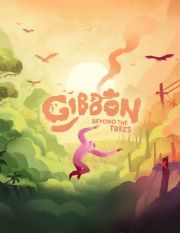 Gibbon: Beyond the Trees
7 images added 47 days ago