A complex future that looks back at its past

Whether it was manipulating events to create different outcomes, or just repeating a loop until you got things just right, last year saw a significant amount of games that dealt with time travel. The concept remains a novelty, as it can be difficult to pull off in a cohesive and satisfying manner. Even before 2021, there were many who attempted, and one such recent title was 13 Sentinels: Aegis Rim. Originally released on PS4 in 2020, the game has now been ported to the Nintendo Switch, where it remains an enthralling tale of time travel and fate. 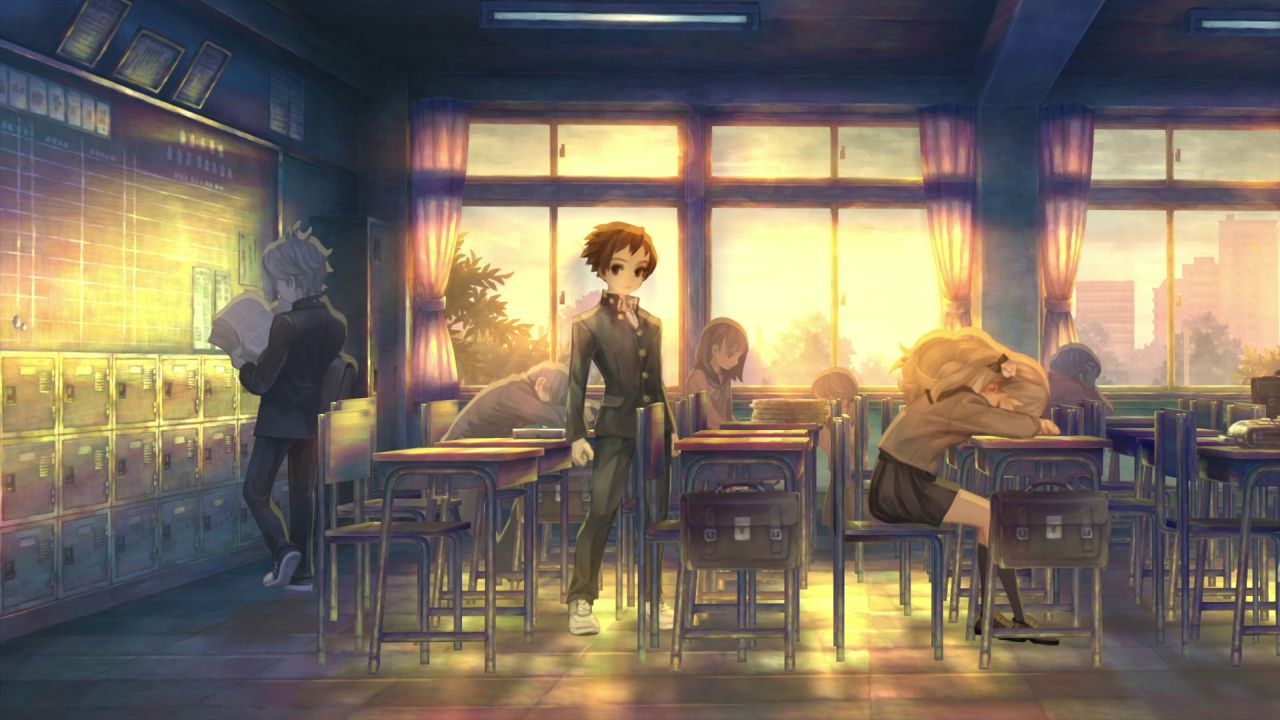 13 Sentinels is a mix of a visual novel, adventure, and action game that takes place across multiple time periods – the distant past, the distant future, and the 1980s. Players assume the role of 13 different characters across the 20+ hour spanning narrative, and observe as their fates intertwine. There's Juro Kurabe, a care-free student who begins having strange dreams and possible hallucinations; his supportive friend Shu Amiguchi who has an agenda of his own. Iori Fuyusaka, a quiet schoolgirl who gets a crush on the mysterious Ei Sekigahara, who himself is in trouble with amnesia. All thirteen of the main cast are interconnected in one way or another, and watching their relationships evolve and unravel is one of the biggest draws of the game, as you jump between all their different perspectives.

Of course, another big draw is the fact that all of these characters are also pilots of huge Sentinel mechs, defending their city hundreds of years into the future from an invading AI mech army. How did they get here, how do they all know each other already, and what does it all mean? Can the destruction be stopped or prevented, by changing the events of the 1980s or even more distant past? Does it even matter, or is any of this even real? The narrative presents a multitude of questions, and continuously unravels them over the course of the game in a very satisfying manner.

The narrative is incredibly engrossing, and a little convoluted. That makes it something that players have to experience for themselves, and it's not exactly easy to spoil; it would be like trying to describe the entire narrative of the Metal Gear Solid franchise. Fans of series such as Zero Escape will quite enjoy the time-travel based twists and payoffs. If you stick with it, the game does eventually manage to untangle all of its threads. Sometimes it feels like you are wracking your brain figuring out how different pieces fit into the plot, while at other times you will correctly guess the upcoming reveals. Although it can't escape a number of genre clichés – after all, it's a Japanese game starring high school students with the corresponding teenage drama and personalities – it manages to overcome those predictabilities. 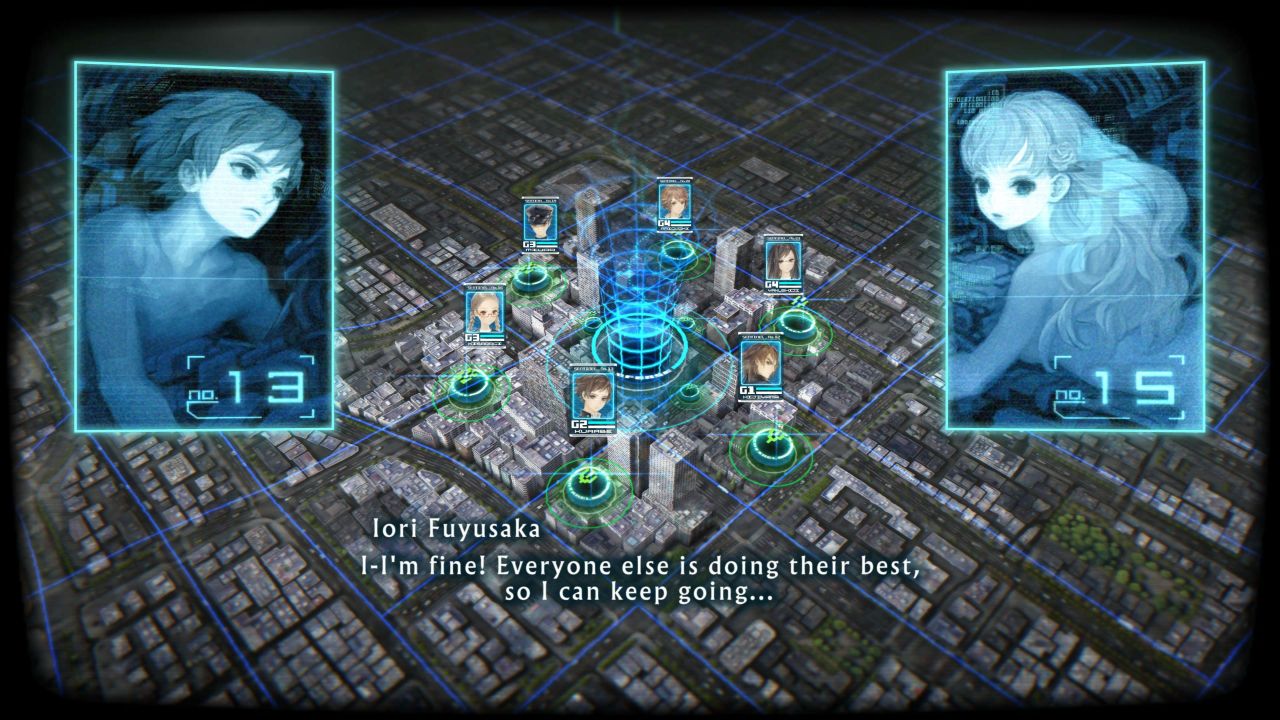 You can't simply choose to play as any of the 13 characters at any time. To not overwhelm players and keep the story cohesive, their timeline and availability gradually unlocks, so you often only have a few characters' chapters available at any given time. Further, to keep players engaged and remind them the story thus far across multiple play sessions, there is a very helpful Event Archive page. This chronological chart of all events that the game addresses is gradually revealed as you progress. And you'll need it, given you have to track not only the overall story of the world, but also each character, as well as their alternative future selves. And if you somehow want even more lore and tidbits, Mystery Files are various objects and bits of text that unlock over the course of the story, and they can be manually unlocked using points earned from combat missions.

The gameplay experience is split into two distinct types. The "remembrance" sections make up the majority of the gameplay time, where the players can do little more than walk around 2D scenes, and converse with others or perhaps interact with an object. Approaching someone brings up a cloud of potential topics to discuss, and as you talk more, new subjects become available. It's mostly linear, and all options remain visible if you wish to repeat the dialogue. There are also occasionally very light puzzle elements, where you have to interact with characters or items in a specific order. There is no inventory, so really, this is a visual novel with a few dialogue options thrown in. This may turn off some players, but think of it more as reading a really interesting book than playing a full featured game.

While the progress through the scenes is linear, there are occasional moments where you have to utilize the ability to replay the situation and discover a different outcome. Similarly to other story based adventure games and Zero Escape, there is a chart that helps you track key scenes and narrative discoveries. By having one conversation and letting another character walk away, you will learn something, and then replay the scene so that you can catch up and talk to someone else. This may seem repetitive, but it's not, and you can safely skip through previously heard dialogue. It is possible to get a little bit stuck, as you can replay the same scene a few times but seemingly don’t get any new information, but these moments are rare. 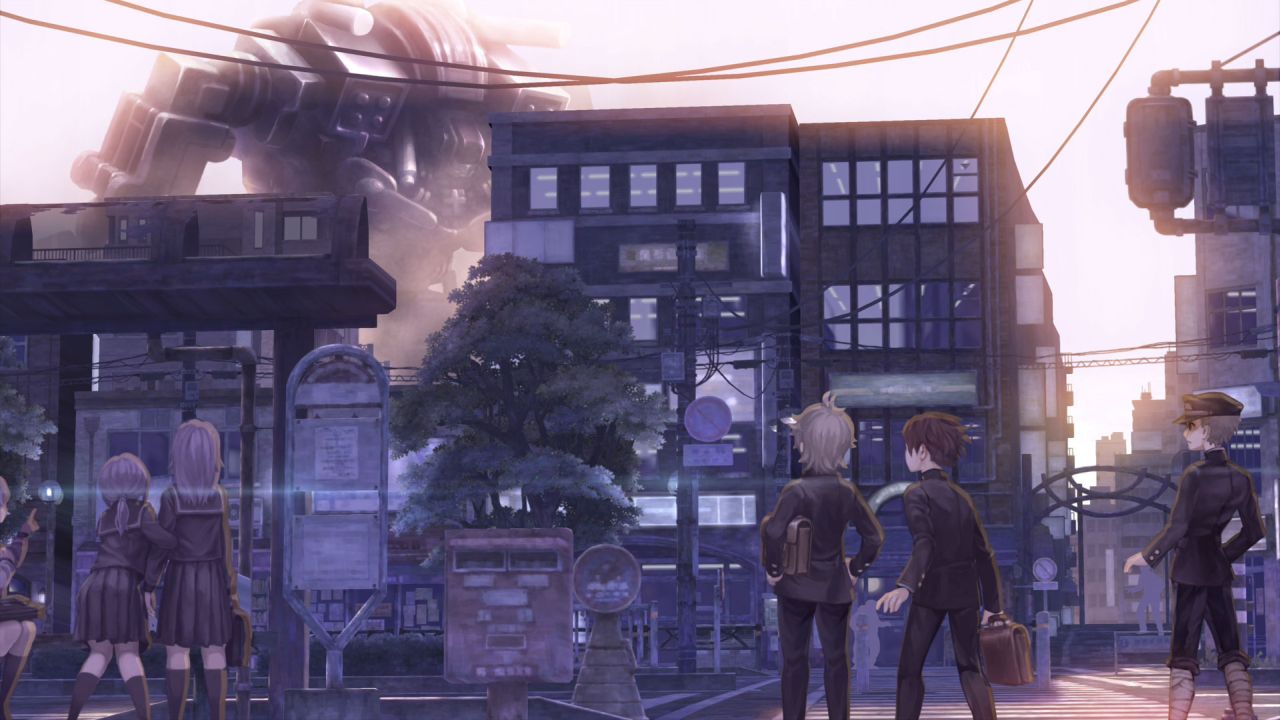 The second gameplay type is called Destruction, as the title hopes to rope in the attention of players that crave action. In these standalone levels, the 13 Sentinels are trying to defend the surviving human cities from waves of invading hostile AI mechs. Before deploying into a fight, players select up to six Sentinels, which fall into four categories – melee, ranged, anti-air, and all-around. The type of mech determines its strengths and available attacks, and after each battle the pilot's Brain Overload increases, which means they need to rest and so you cannot use the same characters over and over. With each successful fight they also earn experience, which is spent on improving their attributes and unlocking new attacks. This RPG-style management of your Sentinel team is enjoyable over the course of the game.

The battles themselves play out as isometric turn-based wave defenses, where you have to manage the deployment of the pilots, their attacks, abilities, and movements. You can pause the action at any time to oversee the fight, but it also auto-pauses when any of the Sentinels have an attack available. All attacks are on cool-downs, and range from melee strikes to long-range missile barrages, to defensive drone and turret deployments. You'll be defending a central power core and enemies will arrive in large groups from all sides, and should any of your heroes fall, you have to start over. There are multiple difficulty levels available for this mode, and on normal setting it presents a satisfying and occasionally challenging series of levels, and a nice break from the story levels. You can also go for optional objectives in each battle, which earns you more points to spend on improving your Sentinels for upcoming battles. 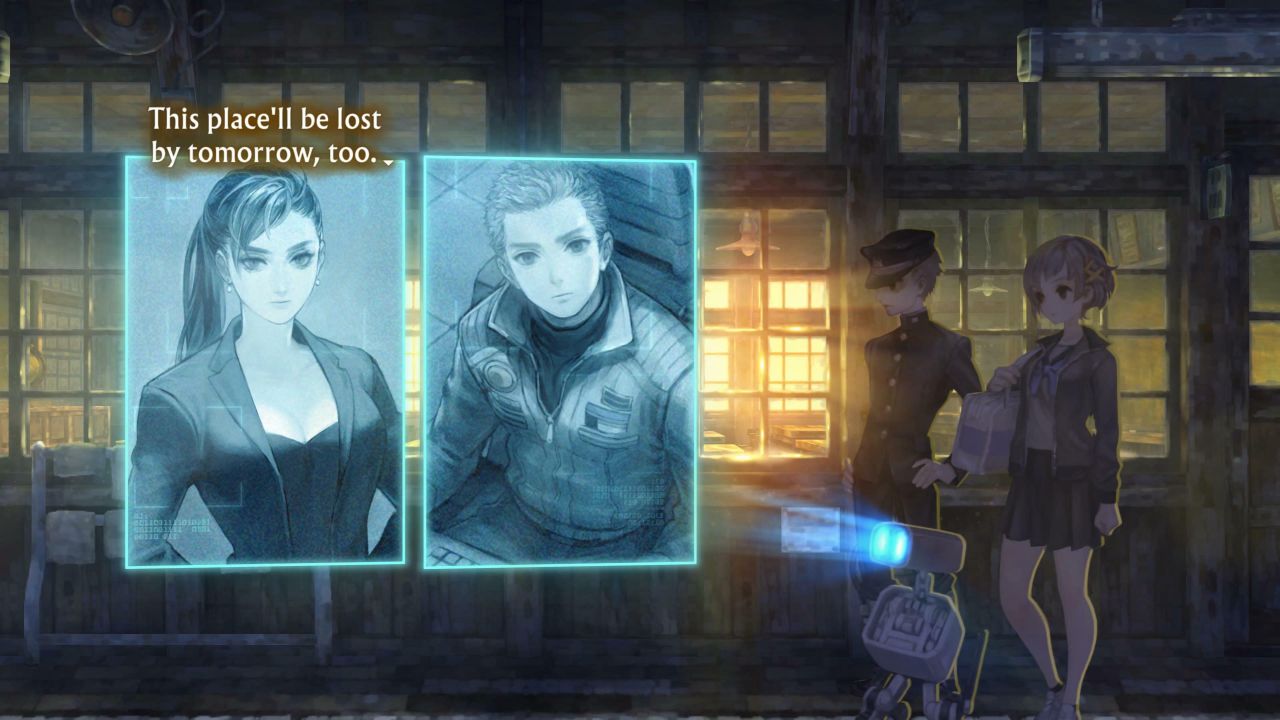 It wouldn't be a Vanillaware without their signature art style. Indeed, fans familiar with the previous works of this developer will recognize their visual flair; from the dramatic backgrounds to the stylized character designs, the painterly aesthetic shines. The animations are fairly barebones, but for a sidescroller such as this it works okay. In battle levels, the visuals switch to a sort of sci-fi grid view of the city, with pixilated style and plenty of explosions. The dialogue and writing is good in its English translation, and the voice acting is also of decent quality across the main cast and the side characters.

The game actually made its debut on PS4 in 2020, where it performed without issue, and the Nintendo Switch version follows suit. The game looks good and has no framerate or other problems on the portable console, whether in docked or in handheld mode. Given that the narrative sections are not at all technologically demanding, and the battle scenarios keep the particle effects in check, this is a well performing port for the Switch. There are no content differences or additions here, so those who already played through this adventure on PS4 are not missing out.

13 Sentinels: Aegis Rim offers an engrossing story that involves 13 playable characters, who experience giant mech combat, time travel, and personal trauma. It has a few clichés and the opening hours can feel like a tangled, confusing mess, but as the story begins to unravel and elements fall into place, it results in a satisfying conclusion. The gameplay is fairly barebones, amounting to a slightly interactive visual novel adventure, but the story is worth seeing through to the end. The battle levels also help dilute the narrative content, with some satisfying action and light RPG elements. If you missed the game on its PS4 debut, the Switch version performs without any issues. Those looking for complex storytelling in a unique setting, 13 Sentinels is a worthwhile adventure to undertake.

Our ratings for 13 Sentinels: Aegis Rim on Switch out of 100 (Ratings FAQ)
Presentation
80
The signature art style of developers Vanillaware is fully intact here, with great character deigns and background vistas. Audio and animations are average.
Gameplay
65
The turn-based arcade battles and RPG style management of your team are fun distractions, but they only make up 1/3 of the game. For the most part, it's a linear narrative adventure.
Single Player
90
A well-written and thought out time traveling adventure, though it occasionally falls victim to cliches. Fans of mind bending narratives similar to Metal Gear Solid and Zero Escape will enjoy this one.
Multiplayer
NR
None
Performance
85
Some very minor occasional slowdowns during the hectic battle sections, but otherwise runs without issue.
Overall
82
13 Sentinels: Aegis Rim weaves a complex, intriguing tale that spans many characters and time periods, and manages to pull it all together in the end. This narrative 2D adventure offers little traditional gameplay - though the battle sections provide a satisfying enough distraction. 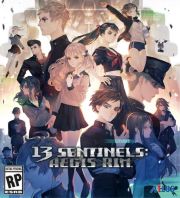