Back in the spirit

Taoism is a common philosophy/religion in China. Although hard to define, one of the key principles of Taoism is going with the flow of the universe. So rather than opposing others' thoughts and actions, a person adapts and uses them to improve their own life. If there is an example of this within the indie game space, it would be the wide use of pixel-art. The Rewinder is another 2D adventure with a strong pixel-art style. It sets itself apart by focusing on Chinese mythology and allowing players to change the past via a neat time-rewind mechanic. With a succinct narrative, The Rewinder offers enough to please most point-and-click adventure fans. 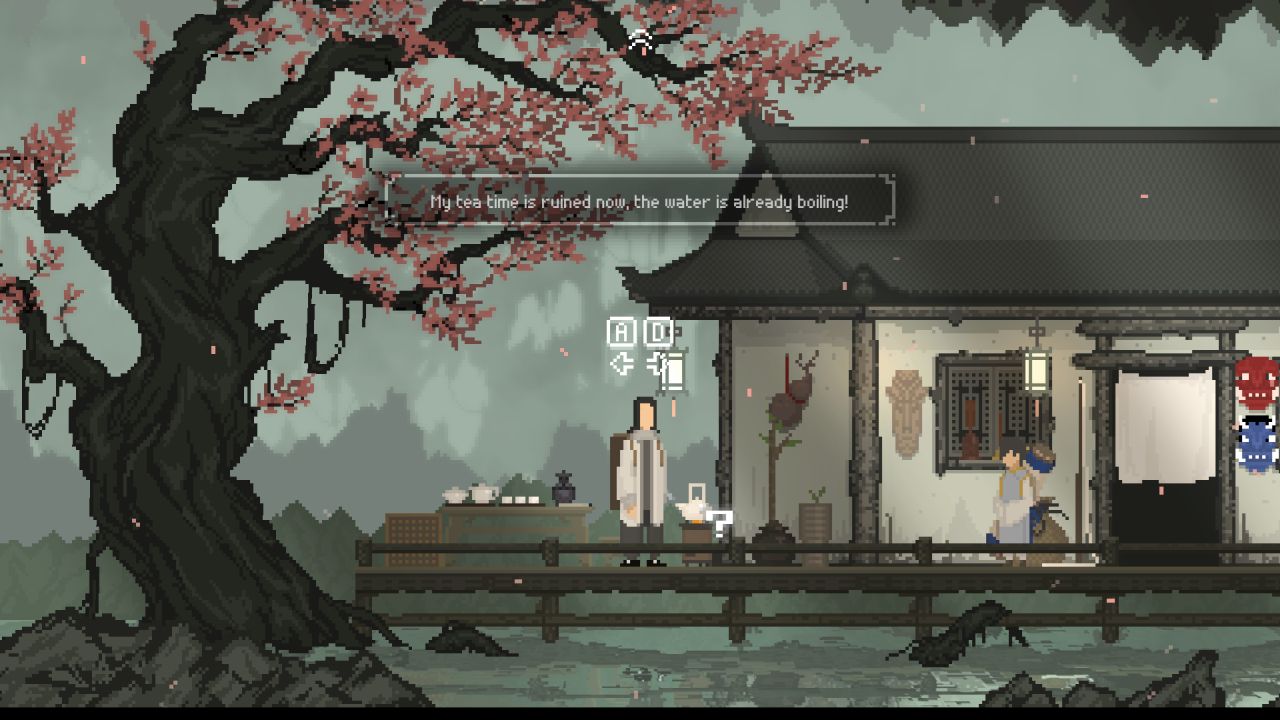 Rewinders are special mortals with the ability to travel to the past and alter the thoughts of others. They do this to change history, although it is only needed when there is an imbalance in the universe. Centuries have gone by in relative peace and rewinder numbers have dwindled. But now there is a big problem. The souls of people from Reed River Village are not making their way to the underworld to be reincarnated. Beings from the underworld need a rewinder to find out what is wrong and fix it, if possible. That rewinder is Yun, who is also the last rewinder alive. Yun’s first ever mission will take him to Reed River Village in order to find out what happened to its occupants.

Reed River Village is a dark shadow of what it once was. A solitary woman speaks gibberish about animals and refuses to talk about what happened, not that she would make much sense given her agitated state. Doors to abandoned houses are locked and the main bridge looks like it collapsed years ago. A friendly spirit within a sealed shrine knows little about the situation but is worried about the populace that he once watched over.

The initial setup of The Rewinder is good, with a simple premise and dark atmosphere verging into the horror realm. The village looks nice with the chosen pixel-art style and the world has enough detail, despite the simple blocky design. Extra information is found if you click on things—key items for puzzle-solving are not hard to find given the minimalist appearance. The overall story is interesting too, although some translation errors within text and dialogue make for a confusing delivery. 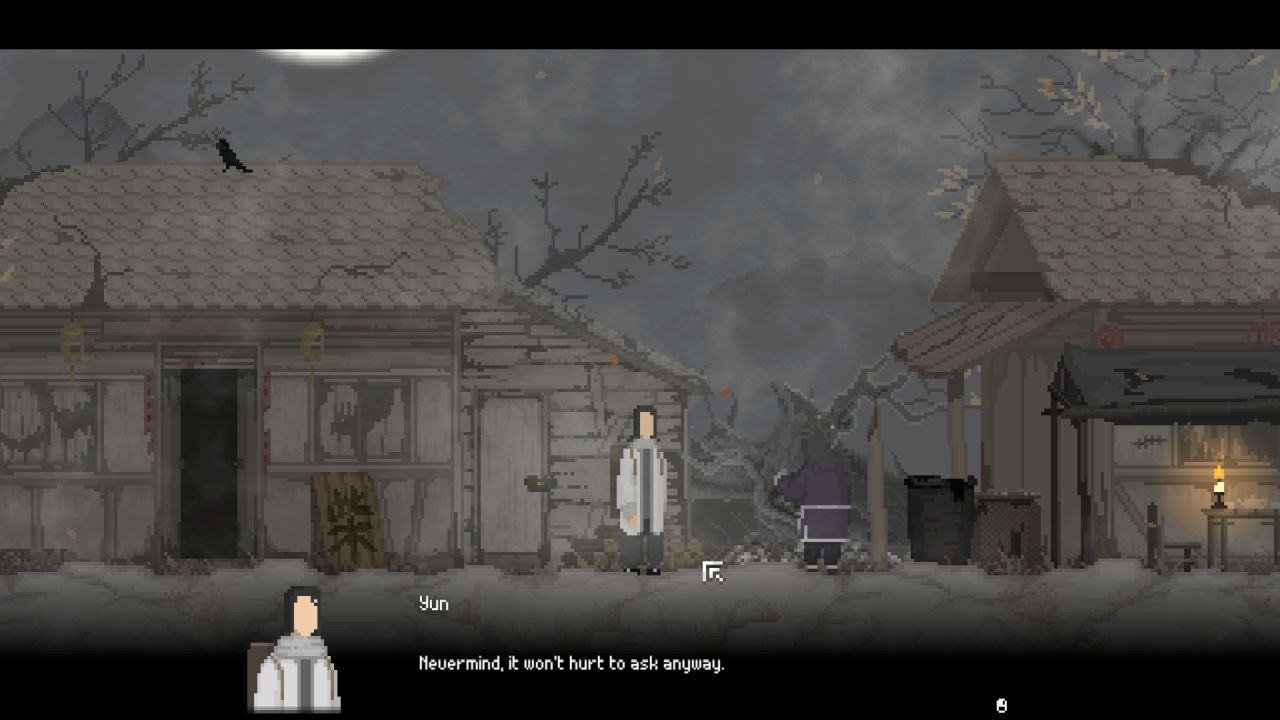 To find out what happened in the village, players undertake basic adventure puzzling. There is a small inventory to store items and the ability to drag and drop them onto the world. Unlike most other adventure games, the puzzle progression is linear. It is done this way to carefully reveal each character in the village—their stories interlink—although it can mean getting stuck with no side challenges to attempt. A friendly spirit tags along with Yun and provides some tips, if you get into trouble.

Many puzzles are actually math based. Since math is a universal language, there are no translation problems. Players will need to find out the weight of objects using a scale. They will also have to solve a tougher sudoku challenge near the end. None of these challenges require high proficiency with numbers, and brute force can work too, but it might be a little jarring compared to other adventure titles.

Within the village are spirits (both friendly and hostile) that need dealing with. First you must find a memory item nearby and relive a pivotal moment in their lives when the village was thriving. These trips back in time are a great way to flesh out characters and get players involved with personal stories. We see a more colorful version of the village, which builds connection to the dilapidated shacks in the future. With a small cast of characters, it is fairly easy to keep track of relationships and construct a mental picture of the events. 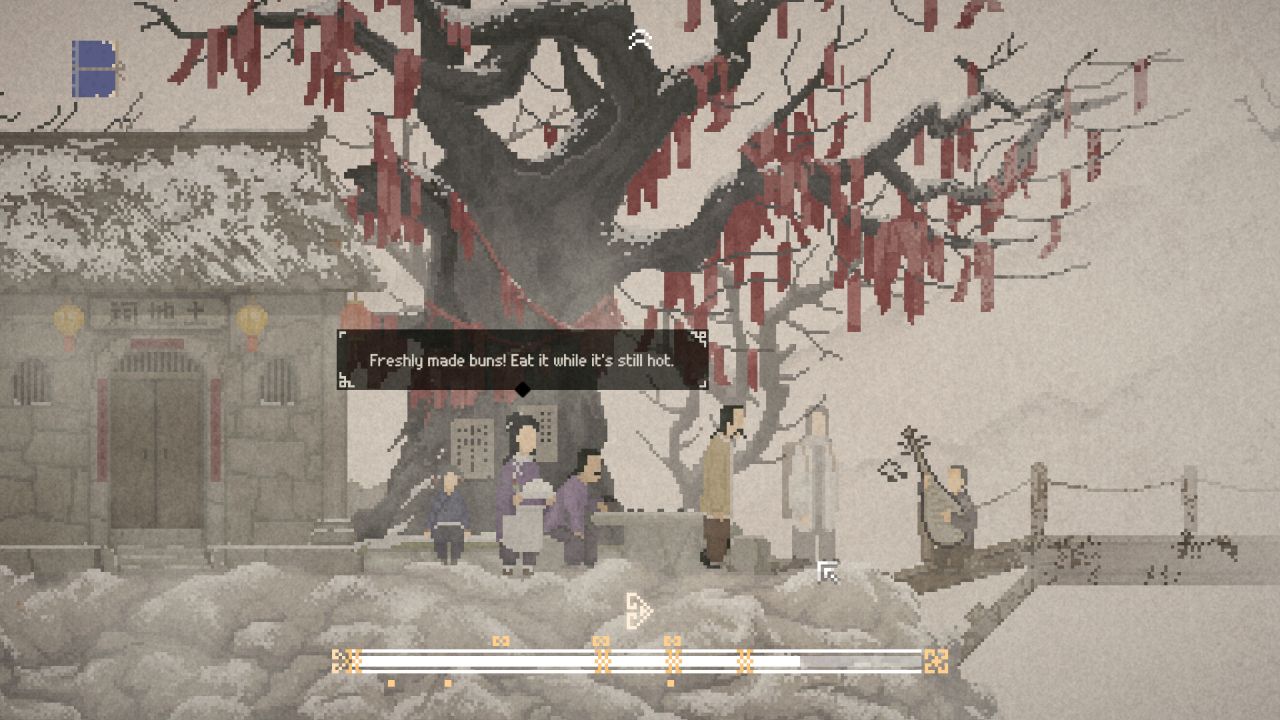 While reliving these past moments, the player observes thoughts and then influences character decisions. Thoughts can be anything from hunger to a fear of rumored monsters. Using the right thought on a character will alter a major decision and change the future. This can be seen when reliving the events of a husband and wife. Instead of working late, a few specific thoughts will see the husband come home early and decide to take his wife to the market. This action saves her life, and her resentful spirit vanishes in the present, allowing Yun to progress. The game helpfully pauses the memory timeline at key points, and it is also possible to fast-forward and rewind. Some moments require influencing multiple characters, although the game only ever scratches the surface of what is a cool rewind feature.

Changing the past alters the village in different ways. It might begin snowing upon Yun’s return to the present. Or, that bridge that was collapsed is now repaired, allowing further exploration. Seeing the village take on a new form brings great satisfaction, more so than merely banishing a spirit. If only there were more of these physical alterations, as seeing the village change is one of the game’s best features.

Near the end of the four-hour adventure, the story incorporates lots of Chinese mythology that might overburden those unfamiliar. Here you will meet strange characters and perform even stranger tasks. These moments are not bad, but they are inferior to the early sections when you are peeling back the mysterious cloud suffocating the village. It is fortunate the art style remains good and the final musical theme is a nice reward for all the successful spiritual rewinding. 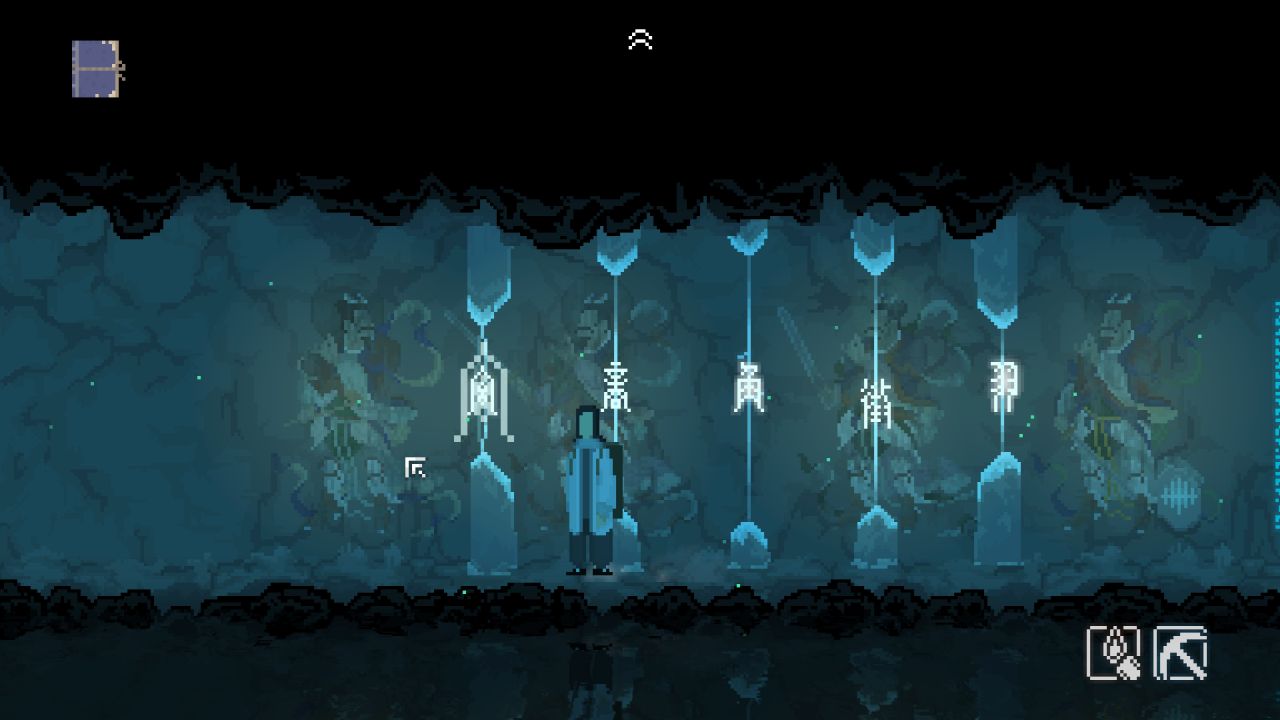 The Rewinder is a good point-and-click adventure game, even if it does not quite use its best features to their fullest extent. Despite translation issues, the story is interesting and well put together as you learn gradually about the village’s inhabitants. Basic puzzles, and a math focus, provide enough for adventure fans to think about while they handle errant spirits. Venturing into the past and altering thoughts is enjoyable and works best when the village changes dramatically afterwards. If you already have a long list of pixel-art indie adventure games to play, consider inserting The Rewinder somewhere near the top and see what happens.

Our ratings for The Rewinder on PC out of 100 (Ratings FAQ)
Presentation
75
Good pixel-art design that keeps environments minimalistic but has enough detail, when needed, for puzzles. Environments are a bit static and audio is minimal.
Gameplay
80
Puzzles are generally simple but the focus on math helps it feel different. Rewinding time and changing character decisions is satisfying, although generally too easy and without great depth.
Single Player
70
Translation errors hurt what is otherwise a good story with an intriguing premise. Across four hours of adventuring, the game only loses steam near the end.
Multiplayer
NR
N/A
Performance
(Show PC Specs)
CPU: AMD Ryzen 5 3600
GPU: XFX RX 480 GTR Black 8GB
RAM: 16GB DDR4
OS: Windows 10 Pro 64-bit

90
No performance issues although some areas take longer to load than they probably should given the basic 2D design.
Overall
77
Discovering the past of an abandoned village in The Rewinder is satisfying thanks to a neat time-altering mechanic and basic adventure puzzles. This adventure only stumbles with some translation errors and minimal complexity. 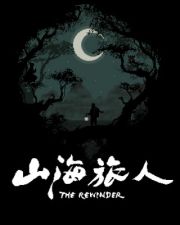 The Rewinder
9 images added 292 days ago