One of the most accessible genres in gaming is the first-person shooter. If you can navigate a virtual world and aim at targets, congratulations, you just qualified to beat almost every single-player shooter on the market. Necromunda: Hired Gun is the latest game from Streum On Studio, who previously made both EYE: Divine Cybermancy and Space Hulk: Deathwing. Like most shooters, it is easy to play with no strange or unforgiving mechanics that could trip up players. But it is also boring, clunky, somewhat broken, and fails to utilize the Warhammer 40K setting despite some nice environments. Hired Gun is a case where just because you can play something, does not mean you should. 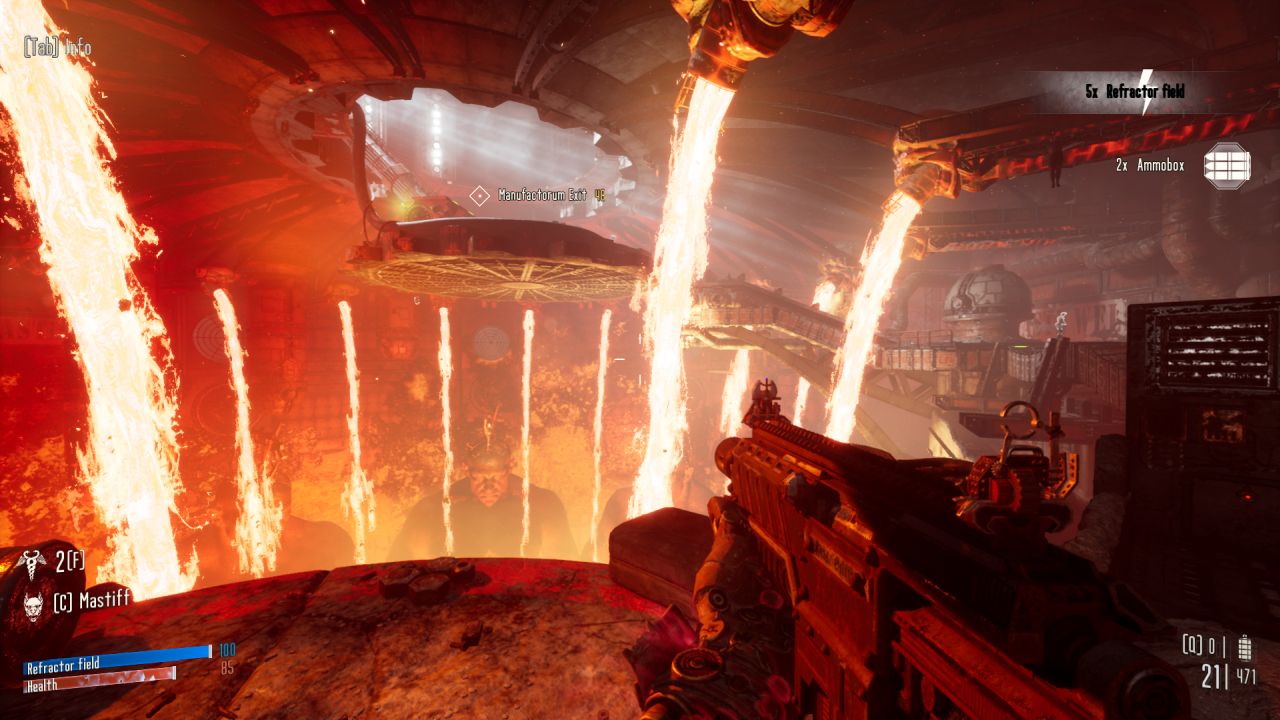 The story of Hired Gun starts out with a simple objective: you are a bounty hunter trying to find a character named Silver Talon. This mysterious target is located somewhere on Necromunda, a massive hive world built for the production of weapons used in war. In the depths of Necromunda are manufacturing plants, forges, generators, and acid lakes. Gangs fight to gain control and it is no place for tourists. The first attempt to locate the Silver Talon goes awry, as you are almost killed by rabid gang members. A man named Jerico rescues you and takes you to the neutral settlement of Martyr’s End. From here, you take missions, buy equipment, upgrade bionics, and keep trying to find the original bounty.

Unfortunately beyond the intro, the story is uninteresting and hard to follow. Individual missions involve attacking different gangs just to find out about the primary bounty, but this link is flimsy and often no useful information is found as leaders escape or there is an ambush. Martyr’s End has no personality, outside some random NPCs commenting on your exploits. So you attack gangs in different places and earn a reputation all while never getting much closer to the target. The narrative is a grossly inadequate use of the enormous lore in the Warhammer 40K universe, and with two contrived boss fights slapped together in the finale, it is more like half a story.

The missions in Hired Gun are linear and self-contained. This is not an open world shooter despite it occasionally hinting in that direction. There is generally only one route, marked with green lights that were left by an NPC that provides directions via radio. Chests can be found in obscure corners and they drop weapons and other gear like a looter-shooter. The scale in these levels is good; spaces are large, with high ceilings and gigantic machines strewn about. Yet there is also claustrophobia because pipes and gangways snake through the world and press down from above. Some of the best moments in the game are when it forgoes shooting, allowing players to absorb the underground mine shafts and abandoned facilities. Just being a small cog in a big machine is nice. 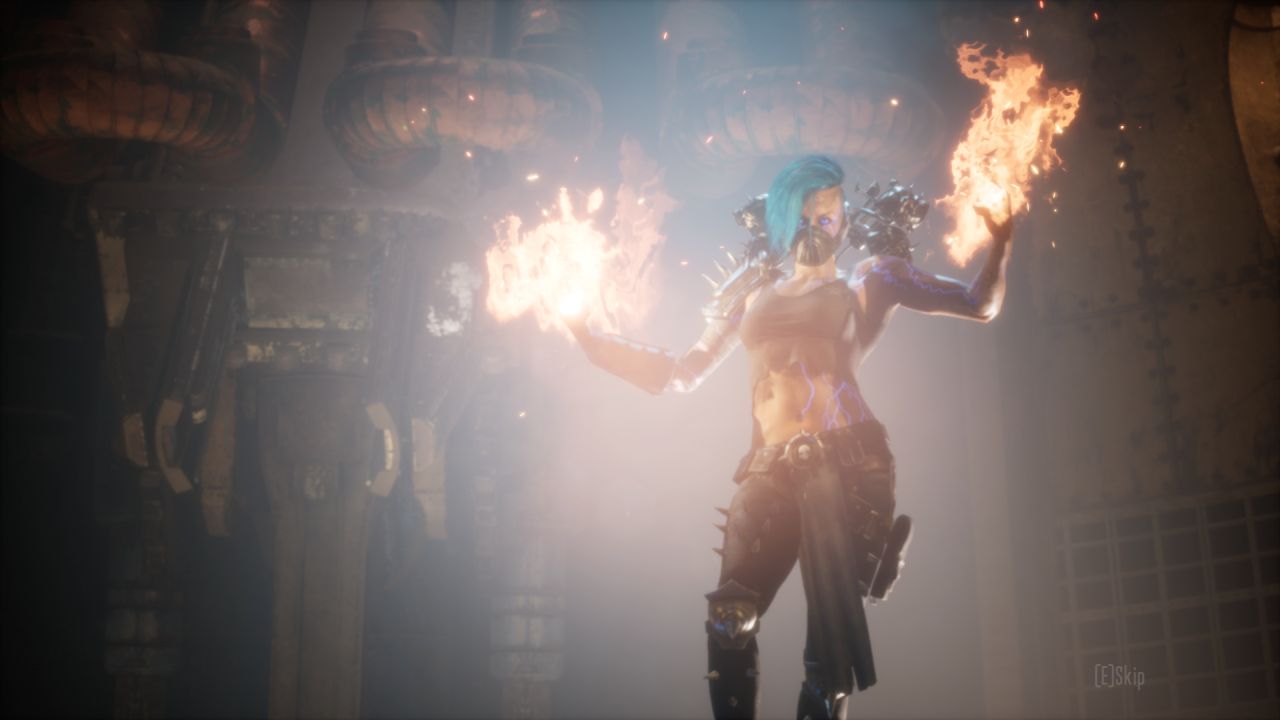 But there are not many spots without action; the killing machine must keep on churning. Given the levels are large and twisted, threats come from everywhere—around corners, behind containers, through pipes, and down stairs. Spinning around, to find new targets in a spot you just cleared, is common. Spotting targets is tricky because enemy armor blends into the environment. This game might have the worst target acquisition in shooter history. But the game seems to know this since threats really far off have a white sheen like they just stepped out of a vat of mayonnaise. Enemies at close range do not have a visual aide, and despite being much larger, they can be harder to spot that our tiny mayonnaise-coated friends.

To help see what to shoot, a dog ally can be called regularly. This dog will sniff out nearby threats which then become red outlines through walls. This greatly helps when finding and preparing for incoming assaults. Sadly the dog does not remain forever and has a cooldown before it can be recalled. Not purely for reconnaissance, the dog also attacks. But even when the canine uses its canines to kill a foe, it barely matters given the huge number of threats per minute. Also the pooch tends to get stuck and cannot reach more obnoxious targets. Any foe caught in the dog’s jaws is also invincible, which is annoying. Even with upgrades to armor and strength, the mutt never becomes more than an intermittent visual aid.

Bionic abilities help in combat and can be deployed at any time. There are some bland but effective powers here, like crush and haywire, which attack enemies from close range. When activating these bionics, the game flings the player to an enemy, although sometimes it overshoots and targets end up behind. Or worse, it fails to engage despite numerous frontal targets—clunky is an understatement. A strength bionic lets you run around like a madman and cut foes down with a sword, but actually hitting targets when you are Speedy Gonzales is a bit tricky. There is a vision mode bionic that turns enemies into indistinct orange globs (not great in combat) and it highlights hidden chests. Like the dog, all bionics have a cooldown and they can be upgraded with money earned from completing missions. 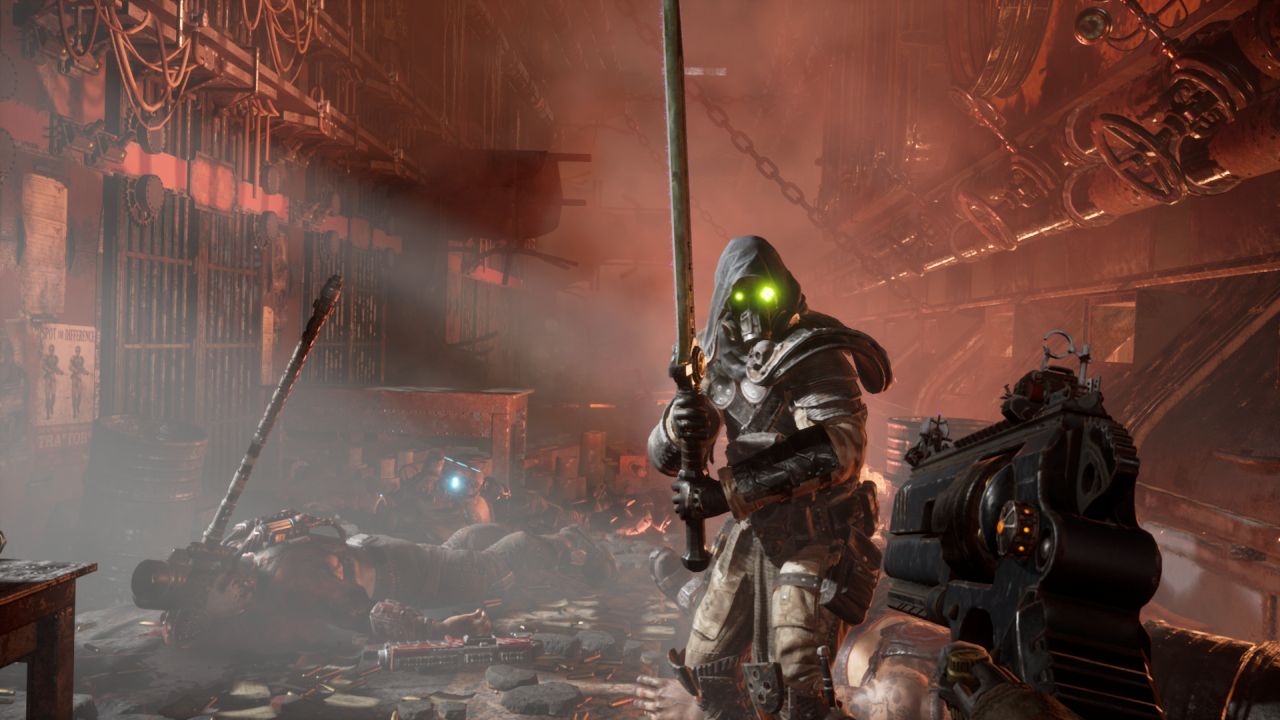 Two bionic abilities are better than the rest because they help to hit targets with standard weapons. The first is heightened senses, which is just slow motion. It is rare for slow motion to not be satisfying in a shooter and that does not change here. When fully upgraded, it lasts long enough and lets you move around to take care of nuisance opponents, albeit with too many visual effects getting in the way. The other bionic ability is perfect aim, which is a temporary aimbot. As discussed, since acquiring targets is atrocious, perfect aim lets you hit enemies while only looking in their general direction. Paired with a decent ballistic weapon, it can chew through basic enemies in no time.

The weapons on offer are adequate although not without a few gripes. There are standard revolvers, pistols, shotguns, assault rifles, grenade launchers, and sniper rifles. The grav-gun is the most fun since its projectiles curve toward enemies and then create a gravity well to suck in objects. The plasma weapons are good but have overdone particle effects; it is just one big blue cloud up close, making it impossible to determine if you are firing at the enemy or the wall. Weapons come in different rarities with alterations to damage and attachments. All of them can be customized, with different magazine sizes, accuracy bonuses, sights, skins, and more. The interface for changing weapon setups could be better but the arsenal is reliable.

Whether shooting or using bionics, the action is frantic because of agile player mobility. Standard run speed is brisk but you also get double-jump and dash/slide. A wall-run has been included but most combat areas have complex wall designs or walls too far from the action. The grapple is the best part of player mobility, as it can help navigate the big layered spaces. It locks onto ledges smartly so it’s not awkward to climb, but it also fails to latch onto a lot of the environment. Certain parts of the world are invisible to the grapple, making for some annoying grab attempts and falls into a cluster of enemies. 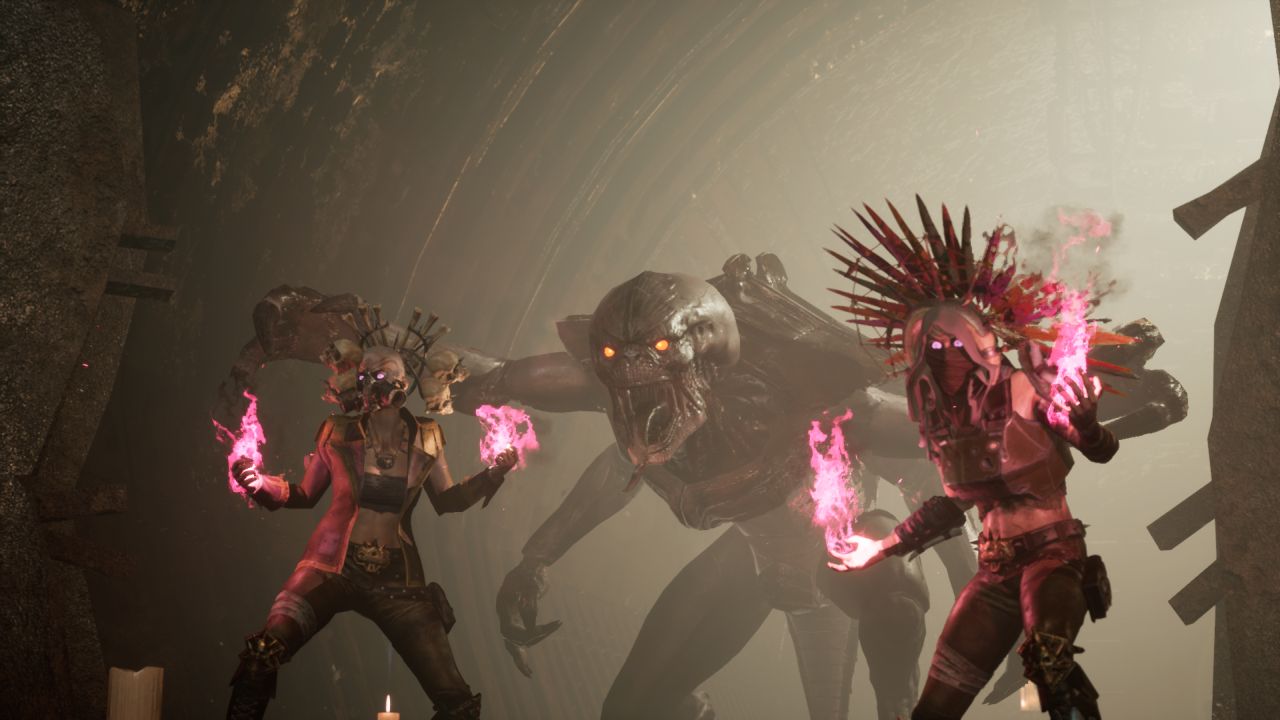 Side missions can be undertaken to grab some extra coin. These teleport players back into levels they have already completed. Although purely solo affairs, they play like multiplayer matches. You might have to defend a spot against enemy waves, capture some control points, rescue prisoners, or kill targets. A few missions require destruction of objects, and these can be completed quickly since you can ignore enemies and zip around with the grapple and a grenade launcher. All side missions stop abruptly once the objective is complete, which is odd when enemies are still firing from point-blank range. The difficulty of side missions is rather inconsistent and they needed to be better integrated with the campaign.

One of the least appealing parts of all combat is the brain-dead AI. Not only are they stupid, they get stuck on walls and repeat the same one-liners. One foe must have run out of ammo because he came from across the map to elbow me over and over, with a gun in hand. There are many spots where foes respawn, and not always behind walls or in places players cannot reach or see. A few spawned right in the middle of a tunnel because a boss fight was happening nearby. Boss fights are awful because they involve small targets with insanely high health. Here fodder enemies seem to exist because health is gained by shooting targets (there are limited medkits and self-revives). This is a strange healing system but at least it promotes aggressive tactics.

From a technical perspective, Hired Gun could be a lot better. The game crashed a few times, mostly when interacting with the vendors at Martyr’s End. The ragdolls and character animations generally look bad, even the takedown animations are clumsy. While the levels look decent from afar, getting too close highlights some shoddy lighting, missing shadows, or poor textures. The inventory management is not great either and it can only be accessed by launching a mission or interacting with vendors. Unfortunately there are too many sloppy technical aspects for a modern release. 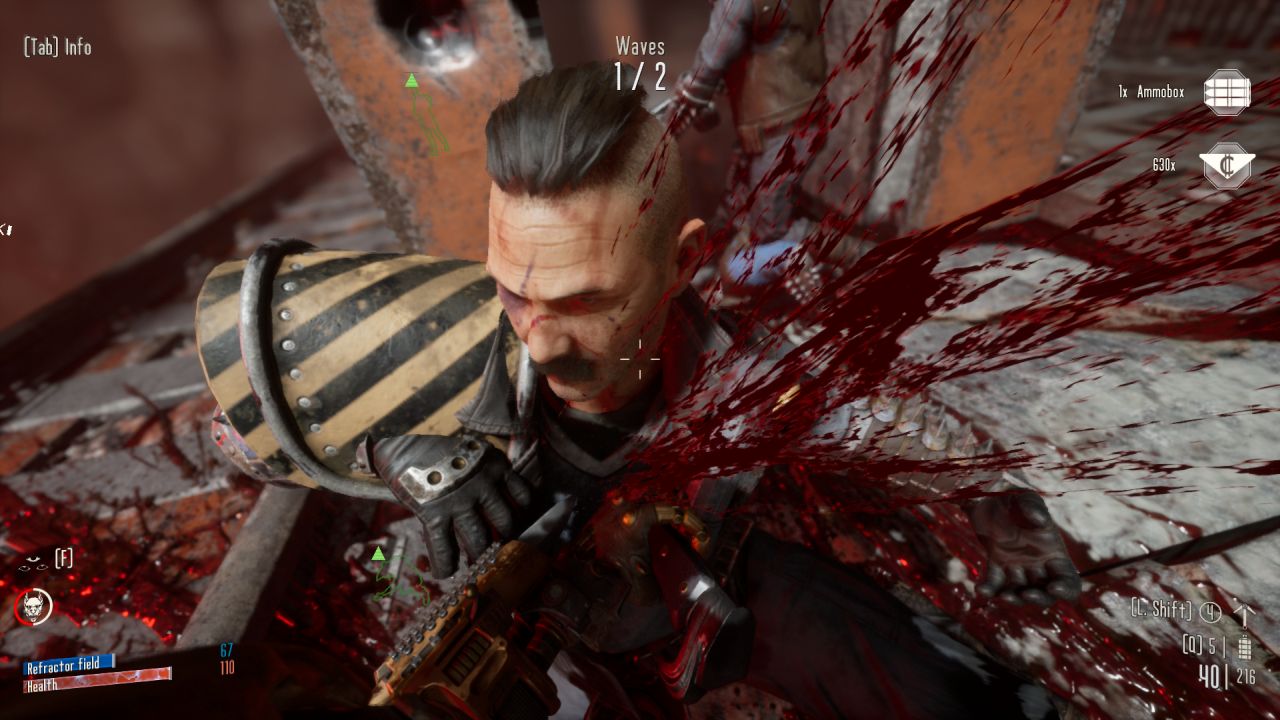 Necromunda: Hired Gun rarely transcends what is a boring generic shooter with a fast pace and a nice setting. The story is forgettable and scattershot. Combat fares better, with decent mobility and a capable arsenal. The level design has some large interior spaces, although within them are idiotic enemies that are difficult to locate. Enemies spawn from everywhere and it all makes for some rather clunky action. Although the numerous bionic powers are helpful, they do not elevate the combat. Hired Gun needed to use its setting better and fine-tune its mechanics because even when ignoring its many shortcomings, it does not have enough quality gameplay to earn a recommendation.

Our ratings for Necromunda: Hired Gun on PC out of 100 (Ratings FAQ)
Presentation
60
The large indoor manufacturing facilities and forges look nice from a distance. The amateur character animations, overdone effects, and other blemishes cause some tarnish.
Gameplay
55
Mobility is an asset in combat and the bionic abilities are effective although clumsy. The AI opponents are dumber than a box of rocks and the weapons are merely adequate.
Single Player
40
The narrative is uninteresting, with not enough connection between the missions and the main objective. It will take around 10 hours to complete.
Multiplayer
NR
None
Performance
(Show PC Specs)
CPU: AMD Ryzen 5 3600
GPU: XFX RX 480 GTR Black 8GB
RAM: 16GB DDR4
OS: Windows 10 Pro 64-bit

60
Performance is okay although some levels have the odd stutter. Loads are quick after the first one. Some crashes were observed but not much progress was lost each time.
Overall
53
Despite some brisk and occasionally satisfying combat, Necromunda: Hired Gun is a boring and clunky foray into a deep dark hole within the WH40K universe. 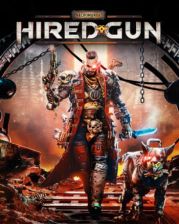