Centering a game around humor can be a tough proposition. It's difficult enough for comedy to succeed in film, but in the video game space it becomes especially challenging to both appeal to every type of player, as well as decide what sort of direction the writing will go. The results often range from great to abysmal, with not much room in-between. Turnip Boy Commits Tax Evasion, a new title from developers Snoozy Kazoo, tries to offer slapstick comedy wrapped in a 2D adventure game, but the lack of cohesive themes and a brief run time make it difficult to recommend. 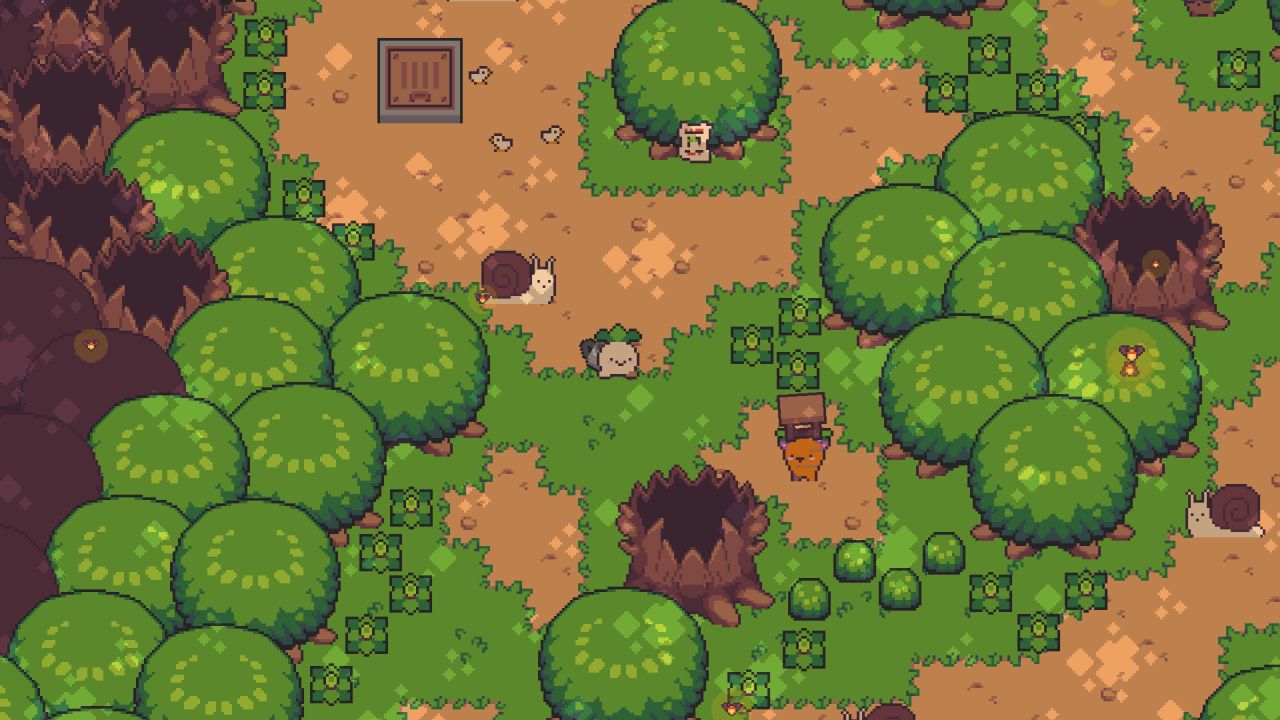 The story of Turnip Boy begins as the local Mayor Onion is getting ready to evict him for owing taxes on the home. In order to pay back the Mayor, you'll have to complete a variety of quests for him, mostly gathering a specific item on the other side of the map. The game world is rather small, but you'll still encounter puzzles and enemies that will slow your progress. Along the way, you'll interact with a few other vegetable characters, and help in their predicaments.

While the game starts off with Turnip Boy's tax evasion problem, the rest of the characters and dialogue have little to do with the over-arching theme. Instead you'll find a scattering of jokes, from a live streamer wanting a "tier 3 sub" in the form of an actual sandwich, to a sketchy character selling wood, which is apparently illegal. You could kill a snail in order to get its rent money, which you tear up (as is with all things you find, as a running joke). The evasion move isn't a dodge, it’s a trip. The jokes are all over the place in their subject and quality, which makes the game feel uneven, and lacking a central theme – such as tax evasion – makes for a scattering of fluff. You could chuckle at one character, and groan at another. It seems to be very much a "throw everything at the player and hope for the best" type of writing. From memes to pop culture references, the game tries to have it all, and often crosses into the "trying too hard to be hip" category. Younger players may find some enjoyment here, if they connect with the humor. 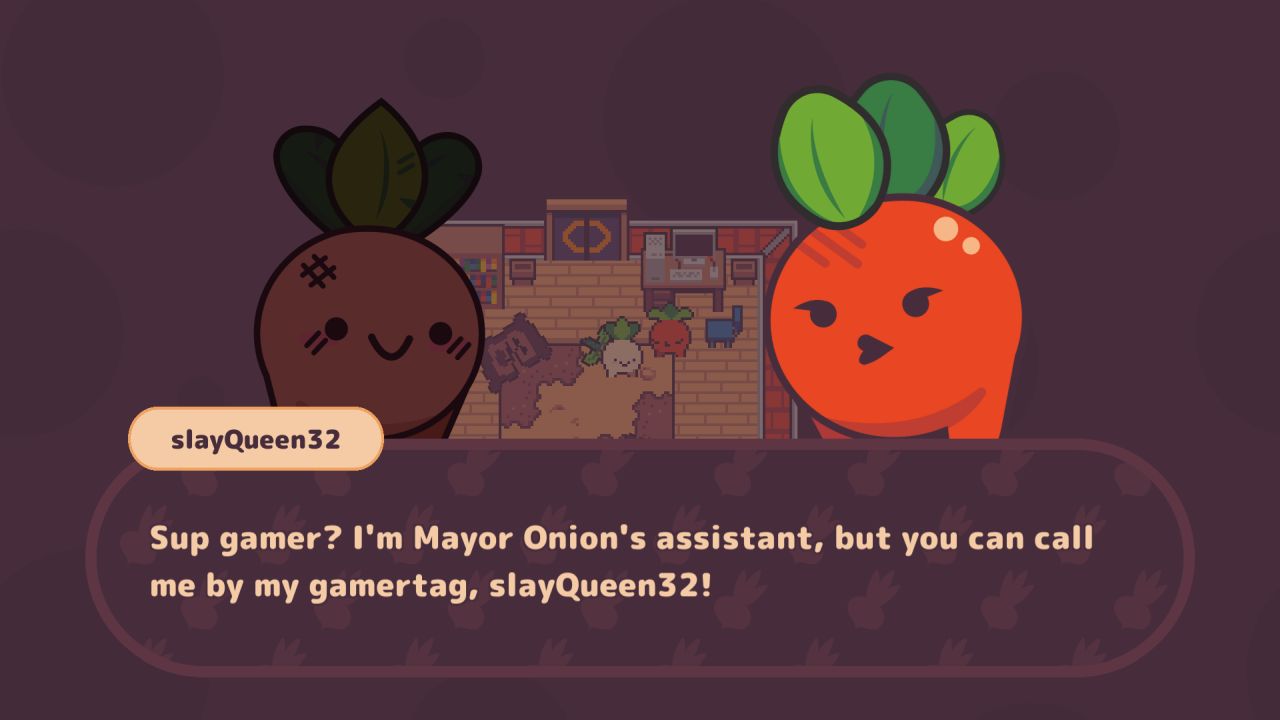 As a 2D adventure, Turnip Boy may also be underwhelming for all but the freshest members of the gaming community. You wander around an admittedly colorful pixelated world, one screen at a time with various exits, and can talk to the various other vegetables standing around. Most will have just one or two lines to say, as static NPCs. Those that give you quests will have a bit more to offer, but as Turnip Boy only communicates in punctuation symbols, the conversations aren't exactly riveting, and this makes the humor even more difficult to deliver effectively since conversations are one-sided. Most of the time the quests will have you retrieve a specific item, and later in the game you'll have to walk back and forth for a fair while just to deliver things.

In your travels, you may have to solve some easy puzzles. You have a watering can that can interact with some objects in the world by making them grow, which is occasionally used in puzzles and battles. You can grow an explosive vegetable at certain spots and throw it across the room to a blocked door; or grow a watermelon that fits into the whole in the floor, letting you pass. These interactions with the game world become available over time, in the style of a metroidvania where you'll need to sometimes backtrack to get access to somewhere new. Most of the time though, the game keeps pushing you onward, and any optional quests reward you with a cosmetic hat. Things get somewhat interesting towards the end, where you gain the ability to create a pair of portals, for you and other objects to travel through. 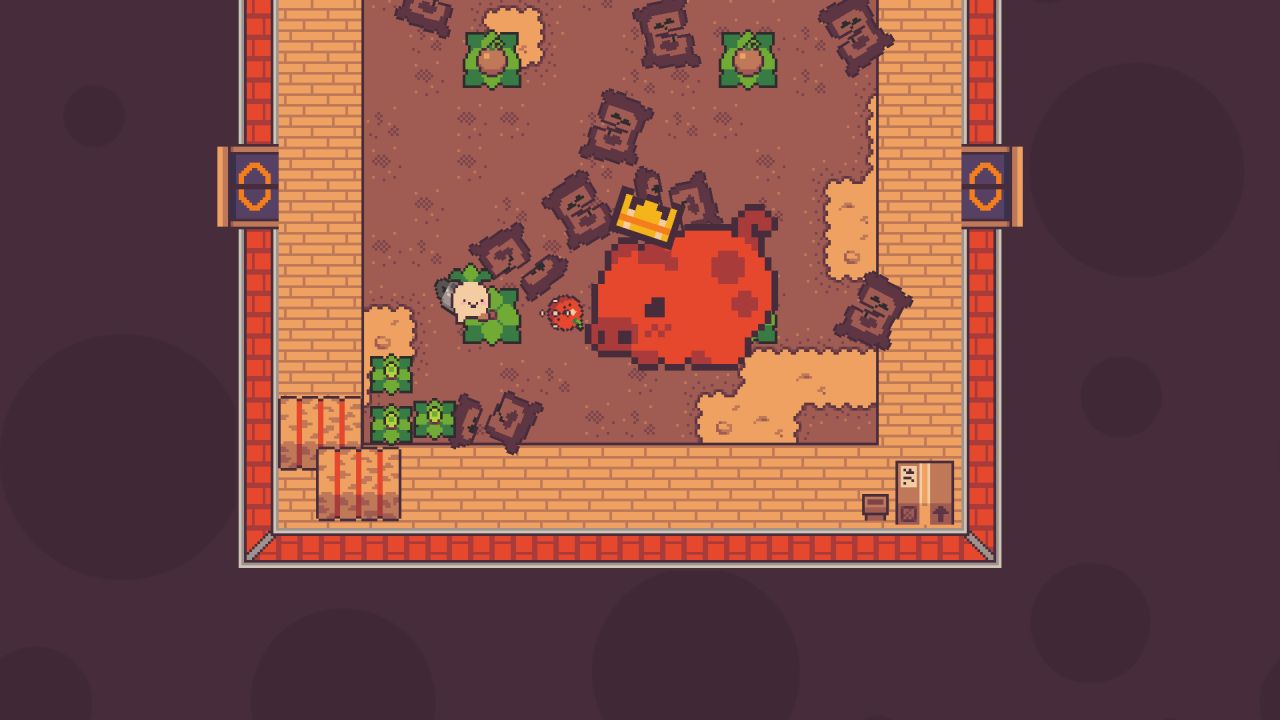 There are also some dangers in this world, mostly in the face of passive enemies walking around, such as snails and worms. These enemies respawn each time you return to the map, but they are easily ignored and defeating them offers no benefit. The game also has a couple of boss fights, but they are just increasingly complex variations of the same scenario – being locked in with the boss, dodging its attack, and hitting it with your melee sword while it’s stunned. The arenas get a bit more dangerous and bosses can spawn other foes, but this isn't a challenging game. You add to your health meter as you progress the story, and health pickups can be found in the boss arenas by destroying some green bushes.

The adventure will take you through the forest where Turnip Boy lives, as well as nearby areas that feature indoor and outdoor dungeon-type levels, graveyards, a more desert-like area, and a few others. Still, the world is quite small in its scope. Completing the entire game takes less than 2 hours, and even if you return to get all the collectibles and optional quests for hats, it's still barely over 2 hours long. Given the $15 price point and the repetitive nature of the game, its hit-and-miss humor, and shallow mechanics, there's certainly a case to be made here that the experience is lacking in content. 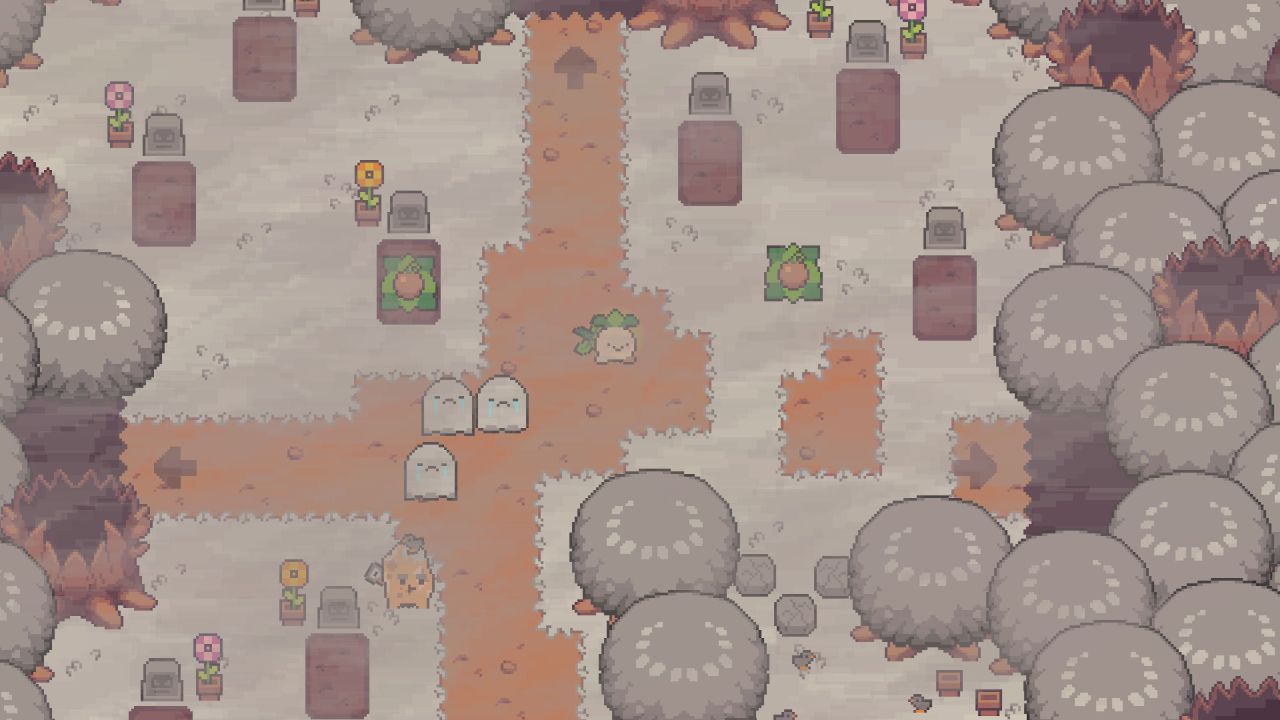 It's at least a nice looking game, with a pixelated art style and minimal animations, and a nice color palette. Players will be reminded of games such as Stardew Valley, while the conversation cutscenes feature a charming, more traditional art style of the characters. The sound design sticks to some basic but well placed sound effects, and the music is well composed, if somewhat repetitive in some areas. The screen resolutions are limited (no 16:10) and there is no mouse support, so the game is far more comfortable with a controller.

Turnip Boy Commits Tax Evasion seemed like it would have a highly promising idea, mixing fictional characters with a real-world scenario, and crafting a whacky world filled with unique characters. Sadly, this doesn't materialize, and instead you get a rather shallow and short experience full of inconsistent writing that seems squarely targeted at a younger audience – despite its very charming visuals. Given all this, the asking price is also a bit high as the game lacks content and has no replay value after its brief two hour runtime. Humor in video games can be difficult to pull off, and staking the entire experience on it is a gamble. In this case, that gamble doesn't pay off.

85
No issues. Lack of mouse support.
Overall
60
As is sometimes the case with comedy films, the premise and promotional material for Turnip Boy ends up being funnier than the end product. This brief and mostly shallow adventure is rarely amusing, but it at least looks charming in the process. 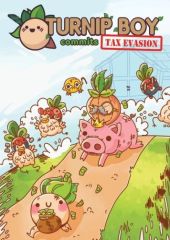