A mere glimpse into a post-apocalyptic world

Choosing a post-apocalyptic setting for a game provides developers with a lot of options. Most rules about normalcy, society, and survival go out the window and there is a mostly blank slate to start building from. Whether it's a nuclear incident or the rise of the undead, putting players into a unique survival situation opens the door for many gameplay mechanics. You could create a narrative adventure, making players decide how they would deal with the unique scenario. Or you could create a mechanics-focused survival experience where food and water are top of mind. In the case of Ashwalkers, the debut effort from developer Nameless XIII, it's a combination of both, but one that fails to produce a spark. 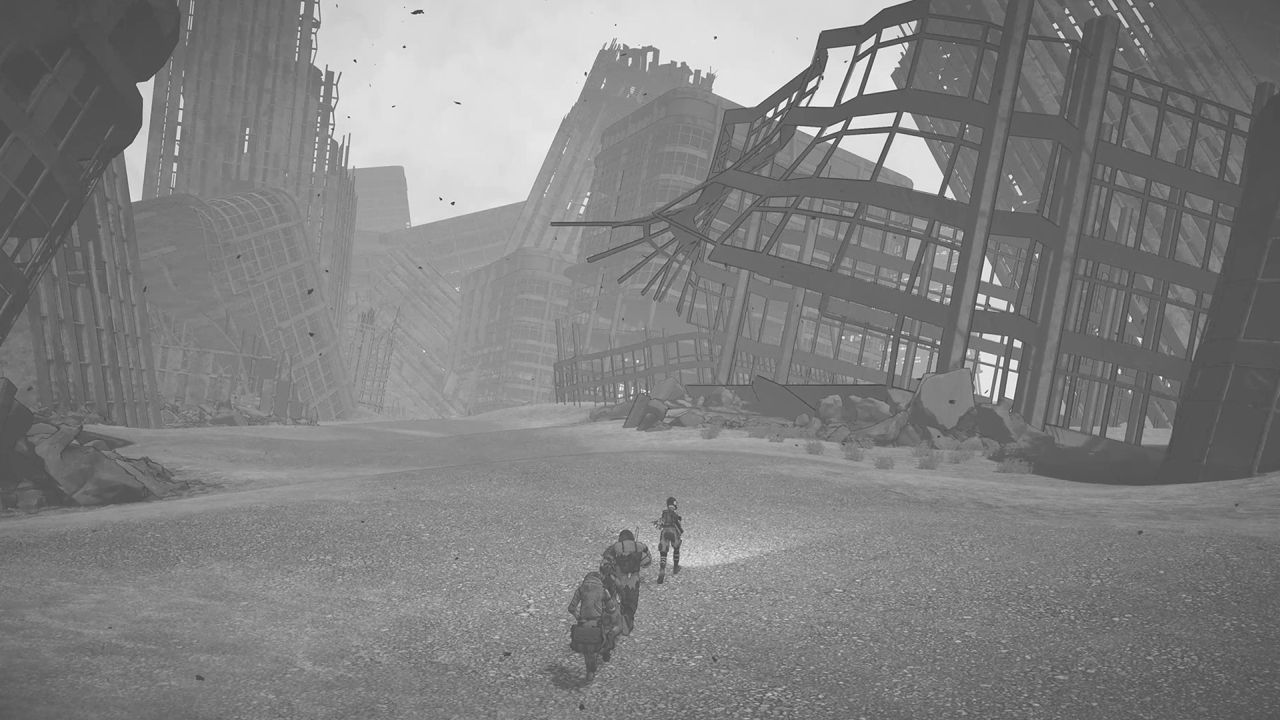 In Ashwalkers, players will follow of a squad of four explorers, who have been sent out from a Dome of survivors to search for a new home. In this post-apocalyptic world, humanity has been split up and they huddle together within spherical structures that can sustain life and keep the inhabitants fed and warm. However, their current Dome is running out of resources, and the first two explorations Squads did not return. As such, the Third Squad sets out to follow a series of beacons and in hopes of finding the next Dome that can sustain their 200k+ survivors. They will encounter savages, hostile beasts, and discover what happened to the previous expeditions.

While the set-up may seem somewhat original, the game's narrative is very brief and lacking in detail. The four characters in the squad are little more than four types of choices that can be made. There's a headstrong leader, a tough warrior, a stealthy assassin, and a trickster. They are simple archetypes that represent the choices you'll be able to make across the trek. They all have names, but we learn nothing about them over the course of the story; they are simply vessels for player options. They don’t say a word to each other across the entire adventure, except for pointing out that you're out of a certain resource. A very short and generic conversation can take place if you choose to have them talk to each other during a campfire rest.

There's no voiced dialogue, and very little information provided as the story goes along. This is a narrative adventure game that lets you make choices through scripted sequences, but the decisions you make are all quite stereotypical and have familiar outcomes. You'll come across a stranger at a campfire, and can decide to ignore him, attack, or approach in a friendly way. You will find a man surrounded by wild beasts, and can choose to help him or slip by. There are also simple decisions, like going left or right at a crossroads. The choices and consequences are fine, and largely predictable – that's about the best compliment that can be given. 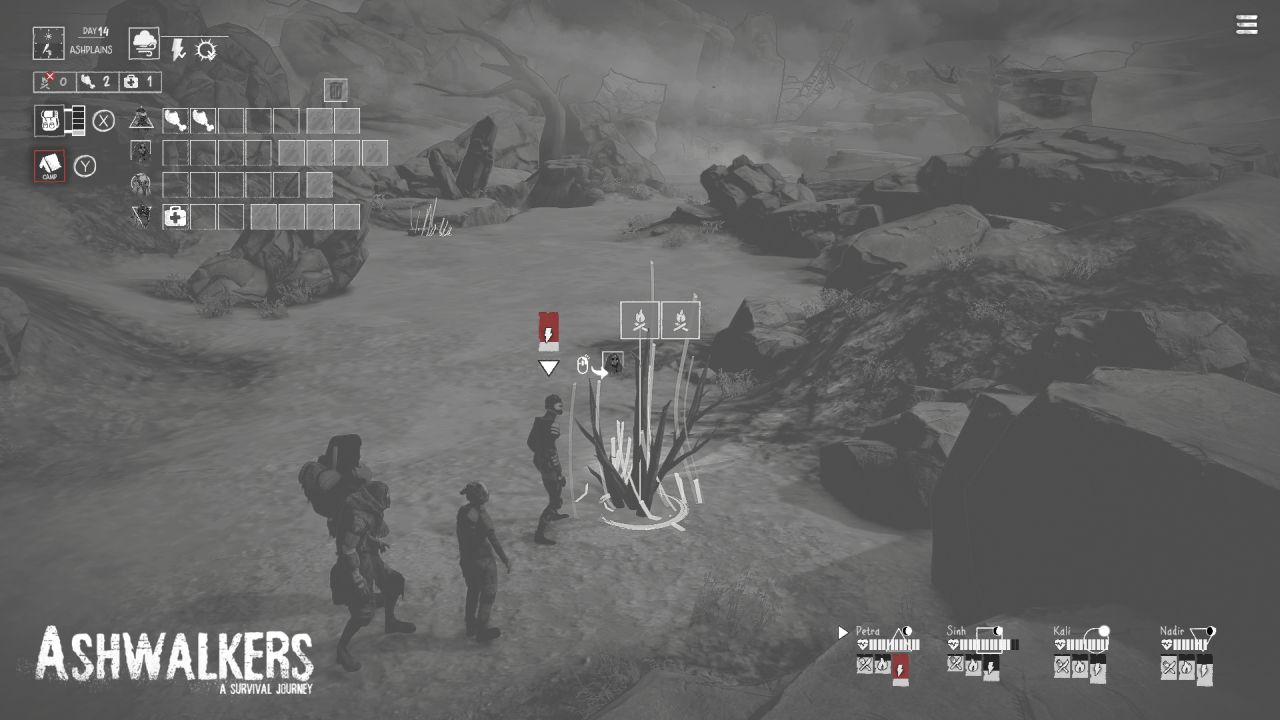 One major hurdle however is the fact that the entire experience is less than an hour long. This means that the story has barely any time to get interesting, the choices have no far-reaching consequences, and it feels more akin to a demo. Events will always occur the same way if you make the same choices, so there's no sense of randomness or exploration in this title. The characters are the same every time. The game promises replay value with 30 different endings, but most are small variations and are not worth seeing when the main narrative is so brief and forgettable. You can, at least, choose your starting point on subsequent playthroughs to reach new choices quicker.

To inject some excitement into the proceedings, Ashwalkers doubles as a survival-type game. You'll be guiding the squad across a few different terrains, in a 3D world with a fixed-camera perspective. The fixed camera is a huge annoyance and gets even worse indoors. Each member has a hunger, energy, and warmth rating, which you'll try to keep from draining, after which point they start losing health. As you walk through very short and linear terrain levels, you'll see glowing icons which contain resources. You simply pick up food, wood, and medicines and it's added to your inventory. There's nothing to explore – any optional paths are presented as a text choice to make, rather than guiding the characters there in the 3D world. Everything you can interact with is clearly outlined, so it's not like you might miss resources. The leisurely walking pace of the squad, with nothing to do but pick up a resource and get to the next decision text screen, doesn't do the game's pace any favors.

In order to stay alive and keep fed/warm/rested, you can set up camp at any time, and use the available resources to start a fire, feed, and heal the characters. On the second screen of the camp, you can also assign each character one of four tasks: rest (the only way to regain energy), stand guard, go exploring, or talk. Standing guard reduces the "danger" level of the camp, though in multiple playthroughs and with the danger level above 50%, nothing ever happened, even if you left no guards. For some strange reason, the character guarding the camp doesn’t use a food ration, while those chosen to rest do. Going exploring might yield resources, but it's an unnecessary risk most of the time, your primary goal at the campfire is to restore energy as much as you can. Even having said all that, it's very easy to reach the ending with all four squad members alive (though perhaps not well, as the final sections often feature zero resources) . 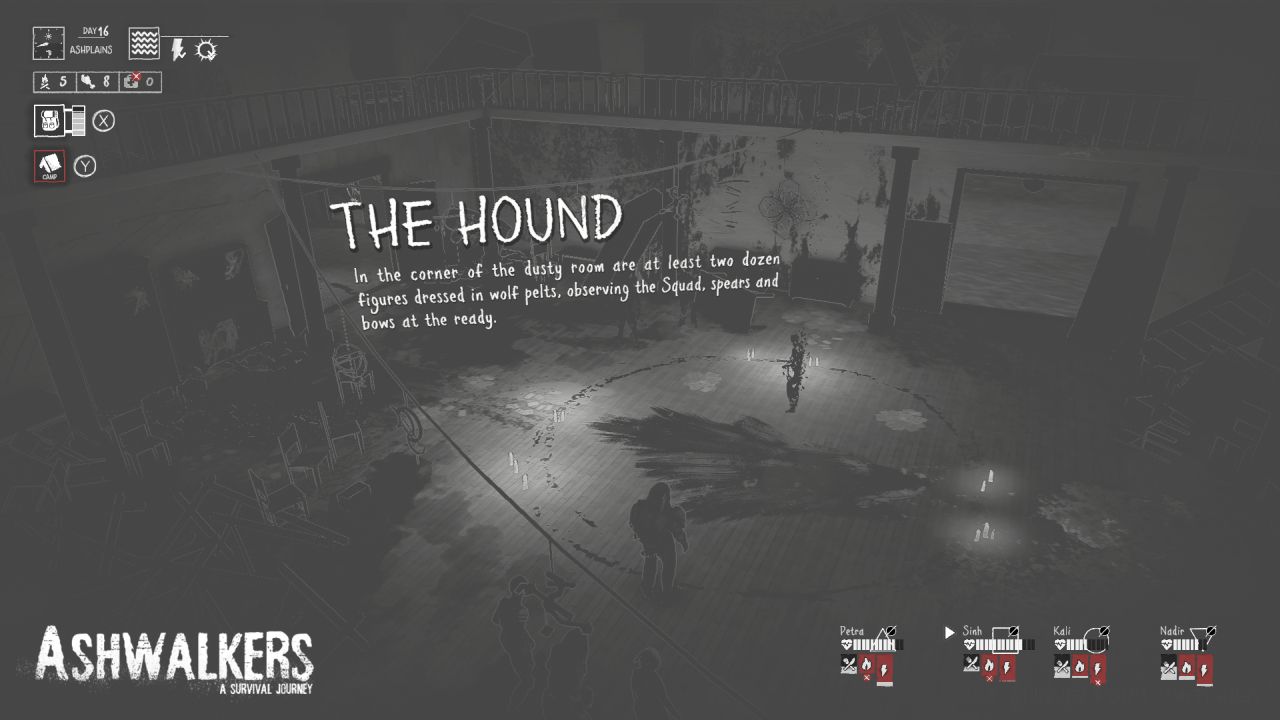 The last option is to have at least two characters speak to each other, to increase their morale. But the morale system seems entirely pointless. Your squad may lose morale completely, or be in very high spirits, but this doesn't seem to affect anything – not in choices, not in survival elements. It's also inconsistent and random – when you camp out, randomized text events happen that may boost or reduce morale. Some choices you make may reduce group morale, while others don't – they may feel sad about cheating some savages out of a meal, but they have no problems sneaking up and killing an unarmed stranger at a campfire without so much as a hello.

Other gameplay elements also make little difference and are over-designed. The size of each character's health/hunger/energy meters and inventory space are different, but it barely affects proceedings. Some characters lose less energy and use less food when standing guard at a camp, but it doesn't matter too much. If you go over the backpack carry limit, it also doesn't matter except for one or two specific sequences late in the game, where you might need to escape something. Some terrain causes the squad to get tired and get cold much quicker, but again, as a player, there's nothing you can do about it. You’re entirely at the mercy of what resources the game makes available; you can carry almost everything you come across, so there's no decision making in survival aspects either. There's also a strange statistics screen between chapters that summarizes the type of decisions that you've made, such as declaring you aggressive or diplomatic, and this seemingly gives you stat changes – but with no tooltips or other text, it's just UI icons that don't make a lot of sense.

The very limited gameplay scope of Ashwalkers is also seen in the presentation. The already mentioned fixed camera annoys, as you slowly traverse a mostly barren and featureless landscape. The game uses a slightly cel-shaded visual style, but beyond that it's just four avatars walking around, with some minimal animations. Other characters and creatures appear only as outlines. Everything except for blood is presented in shades of grey, matching the post-apocalyptic setting decently well. The music can be decent at times too, but it comes and goes seemingly randomly, often leaving you walking in silence. 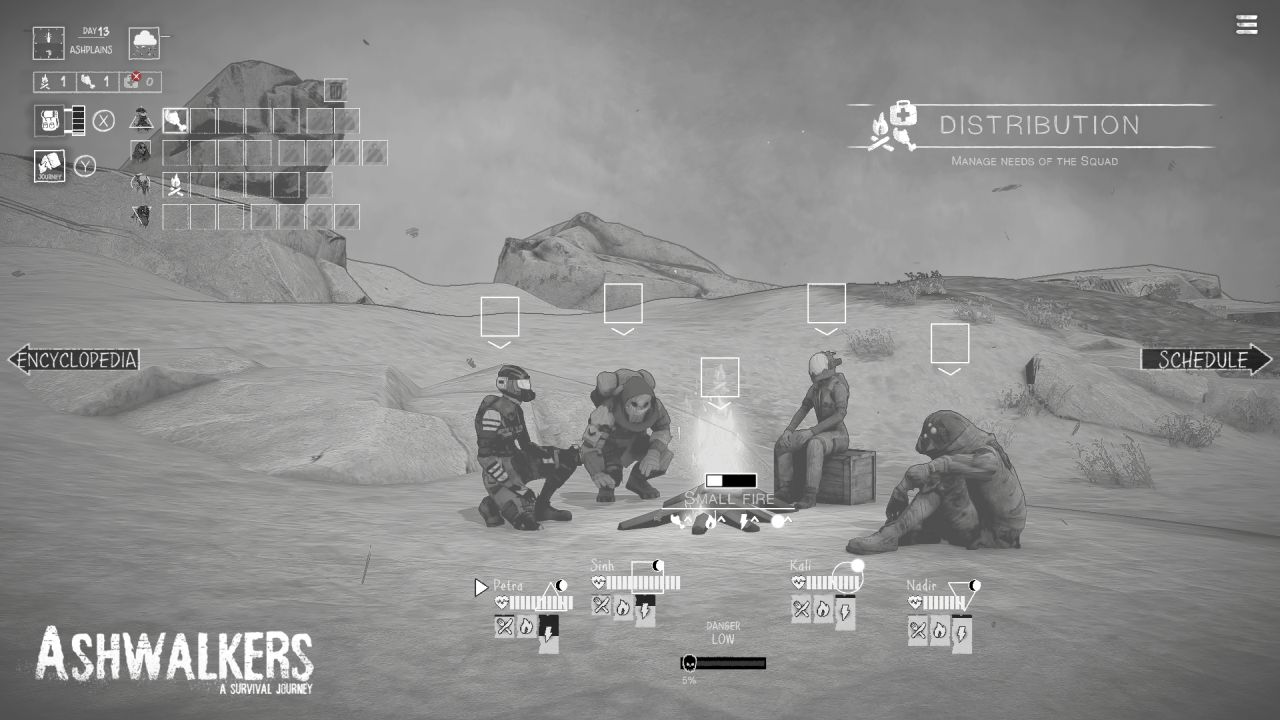 Even with the budget audio and visuals aside, the UI could have used more refinement. Displaying text on a black and white background doesn't always make for easy reading. The survival meters of the characters are all crammed together, along with needless shapes (supposedly representing their personality?). The inventory management doesn’t always stay open when you drag items around, and the icons can be small. Of the very few text boxes the game has during exploration, sometimes the text runs off the screen and disappears. Sometimes the text box appears and goes away very quickly if you don’t stop walking immediately to read it. The game is played entirely with the mouse – the Escape key doesn't even bring up the pause menu.

Ashwalkers is a bleak but brief and unrefined survival adventure. The story is very short, and there are only a couple of major choices that you'll want to go back and replay. You learn a bit about the world, but the squad you control will remain complete strangers, and just hollow characters to represent your choices who don’t even talk to each other. The survival elements seem like a distraction, and the decision to make players walk through a dull 3D world is unfortunate. Mashing together the two genres doesn’t produce very satisfying results when both components are weak to begin with. The game's only redeeming quality is its price – a low $12 – means that perhaps some hardcore fans of all things post-apocalyptic may get something out it.

Our ratings for Ashwalkers on PC out of 100 (Ratings FAQ)
Presentation
50
The bleak world lacks detail and real dangers. No character interactions or voice acting, very little music that comes and goes.
Gameplay
60
The various choices you make offer predictable outcomes, and there is minor replay value to see the alternate paths. Resource management and walking around the world is very dull.
Single Player
40
A very short experience that barely gets you engaged with the story. At least the price of the game offsets its lack of content somewhat.
Multiplayer
NR
None
Performance
(Show PC Specs)
CPU: AMD Ryzen 5 3600
GPU: ASUS Radeon RX 580 8GB
RAM: 16GB DDR4
OS: Windows 10 Pro 64-bit

70
No major issues, though occasionally text boxes disappear too quickly, and text itself can run outside the boundaries.
Overall
50
Ashwalkers is a low priced, brief survival adventure that offers neither satisfying decision making nor engaging gameplay mechanics. 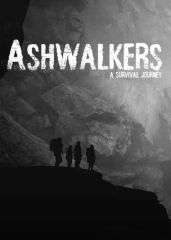