It's good to be bad

Being the good guy can be so boring these days. Sometimes, all we want to do is hold the world to ransom for a cool million dollars. If you ever had a dream to be Dr Evil, you’re in luck as Evil Genius 2 is the game for you. A parody of the 60s Bond spy films, you can finally play as a madman with plans of global domination using a unique world-ending super weapon. It is every super villain’s power fantasy. 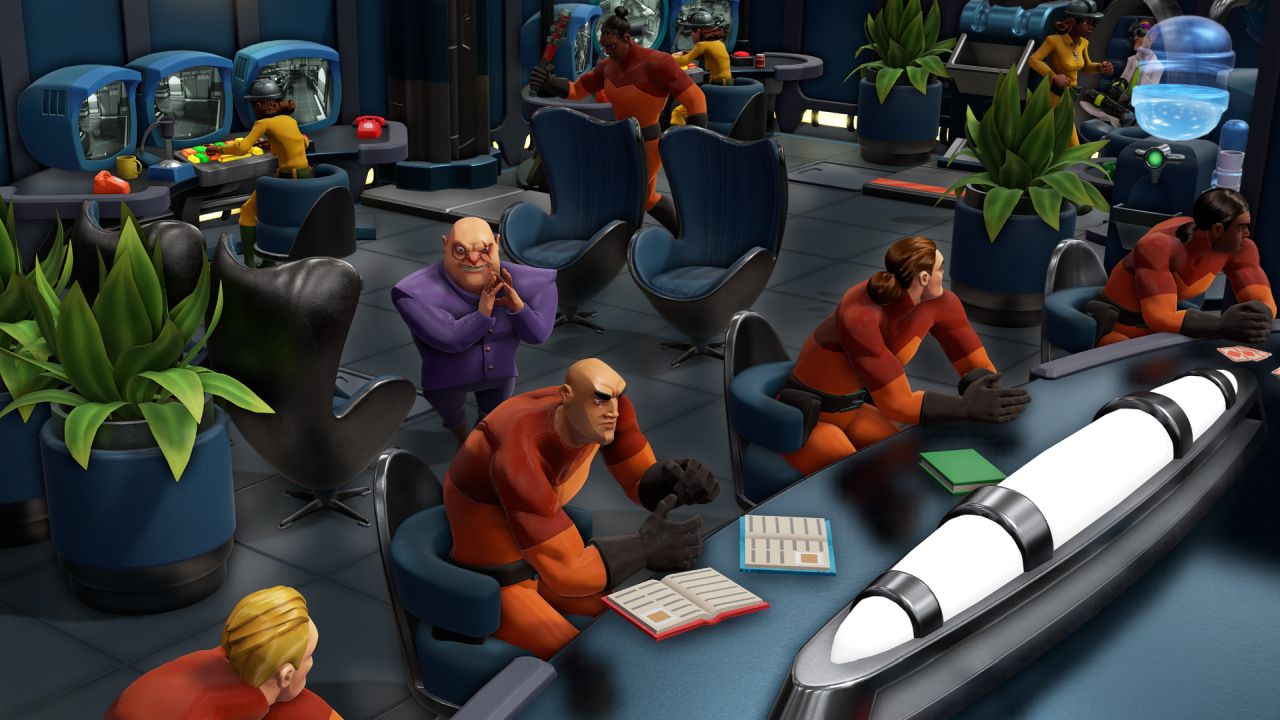 Evil Genius 2 was a sequel I never expected to happen. The 2004 original is a base building RTS in the style of Dungeon Keeper. The Bond inspiration was clear with Maximillian being a Blofeld parody and John Steele being Bond. There was plenty of tongue-in-cheek humour and charm which poked fun at the cliches of the spy genre. Evil Genius 2 keeps the tone and charm of the original.

The premise of Evil Genius 2 hasn’t changed. You have the choice between four characters, each with their own buffs and skills, and you aim to dominate the world. All the while, a slew of secret agents will try to stop your dastardly deeds. As with all evil geniuses, you run the operations from a secret lair with an army of minions at your disposal. Maximilian makes a return as an evil genius alongside Red Ivan, who is now a full-fledged boss instead of a henchman. You can also hire Eli Barracuda Jr, the son of Eli Barracuda from the previous entry. Clearly the apple doesn’t fall far from the tree. Each genius has their own playstyle which adds variety. Your main goal is to build up the base, while fending off attacks from rivals.

The campaign can be fun, if a little long. There is a feeling of achievement when you see your base expand, like you’re on the cusp of global domination. Minion recruitment is present and you can train these minions into various different types such as scientists, guards, valets and more. On top of this, you have a research tree to improve your traps, global communications, lair and minions. As well as your basic workers, you can also have a henchman, who is a strong variant of one of the minion types. You can control the henchman yourself and put them into the heat of battle to turn the tide against an agent. It can take a lot of time to feel like you’re making any progress, however. After 15 hours in the main campaign, I still had to unlock the majority of minion specialisations and I was locked out of tier 3 research upgrades. I barely felt like I was making any progress.

The game is lengthened further by investigators and agents. Sometimes you’re warned about investigators turning up to your lair, but not all the time. A timer notifies you of when they should be arriving, with a further alert when they actually do turn up. However, this accounts for less than half of the investigators I’ve had to deal with. There were multiple occasions when I was moving through my base and saw a group of 5 investigators already inside or I was notified that a trap was triggered. This issue is also exacerbated when special agents get involved. If you’re lucky you might spot a mission to intervene before they visit your lair. If not, then they will turn up unannounced and wreak havoc. The worst moment I came across was when I was visited by 3 special agents without warning, all within a minute of each other. A lot of my gold was stolen by Symmetry, Red Olga turned up and killed a lot of my minions as well as the P.A.T.R.I.O.T. agent who left a corridor full of body bags behind them. You’re given very little time to breathe between visits and it feels like an arbitrary way of lengthening the game. 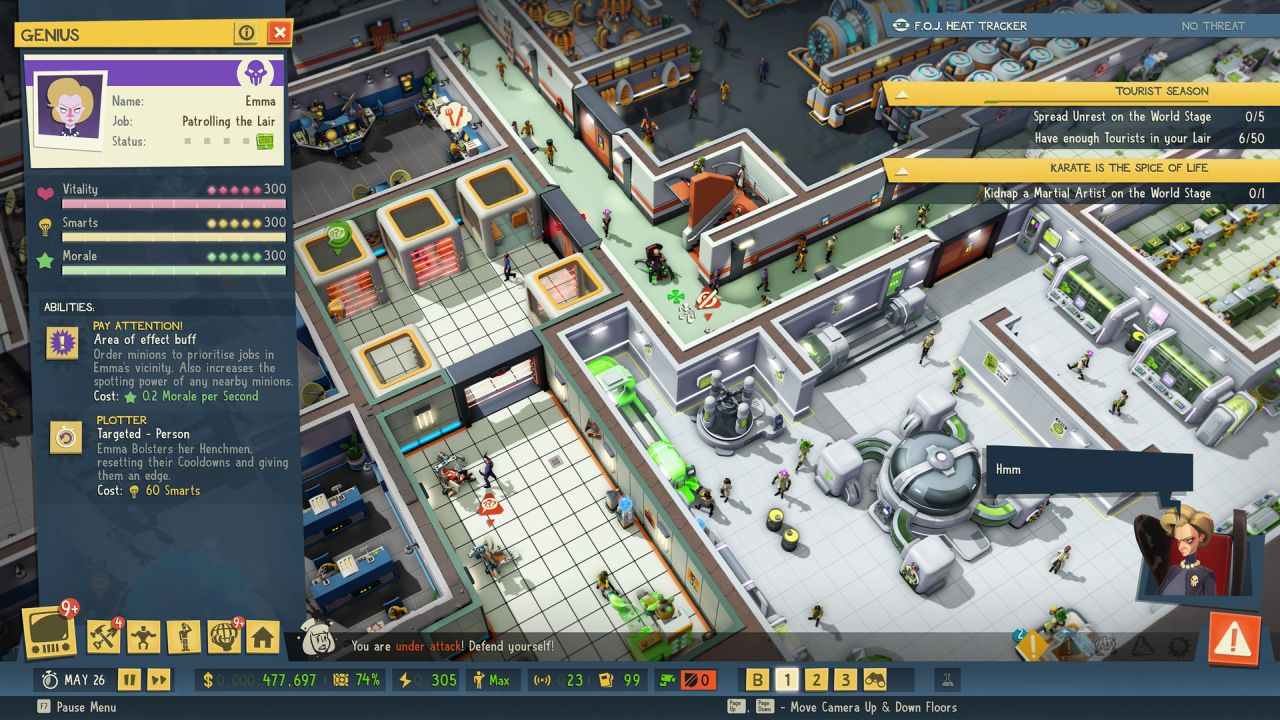 These issues are compounded by the Minion AI. You have no control over the minions and instead they do their own thing. Once you tell them to build something, research something or distract an enemy then they will do it automatically. However, I did notice some issues. The first issue is that the AI doesn’t like stairs. Once I researched stairs and built rooms on other levels, I thought that my minions would spread out over the available area. Annoyingly, none of the minions’ staffed any of the rooms on separate levels. It was very late in my playthrough when I noticed that the new security rooms had no one manning the cameras and the secondary break room never got used. This particularly frustrated me as after a secret agent attacked, multiple minions defected due to low morale but none of them used the room to bring their morale back up.

This issue also presents itself during fights. Even when you’ve put the base on high alert, your minions will attack any enemies one at a time unless they’re in a populated area. Once you have higher level enemies attacking, you will lose a lot of minions. Once I had a team of heisters stealing all my ill-gotten gains and I lost a few guards taking out the bulk of their force, but 2 survived. These thieves then decided to kill nearly 50 of my men with one hit as they approached them one at a time. You are frustratingly helpless in these situations and it would be nice to control a group of your minions like you can do with your henchmen.

Another weak aspect of Evil Genius 2 is the world map. Through the world map is where you will conduct many of your schemes and collect your money. All this really boils down to is collecting enough resources and starting the mission timer. You’ll slowly collect the money throughout that time and then the mission ends. In each location, you’ll then have to do another mission to lower your heat level so you can continue with your schemes. Rinse and repeat. It just becomes a numbers and timer game and it gets old fast. Luckily, most of your time won’t be spent here and it isn’t the main draw.

Evil Genius 2 comes with two modes, those being the main campaign and a Sandbox mode. The sandbox does what it says on the tin, with everything available to you at the start with unlimited money. The campaign does act as a thorough tutorial in the first few hours and it is worth playing to get to grips with how everything works. You slowly build your base, workforce, learn about research and how to play through missions on the world stage. The campaign comes with a narrative through line with the aim of world domination. To convey this, there are multiple static conversations at key moments which act as cutscenes. These interactions between characters are usually humorous, engaging and livens up the heroes. Maximilian comes across as an egotistical, callous maniac and the workers are usually dim and feeble. Guards are just hulking brutes who want to hit things and deception minions are calculating and conniving. 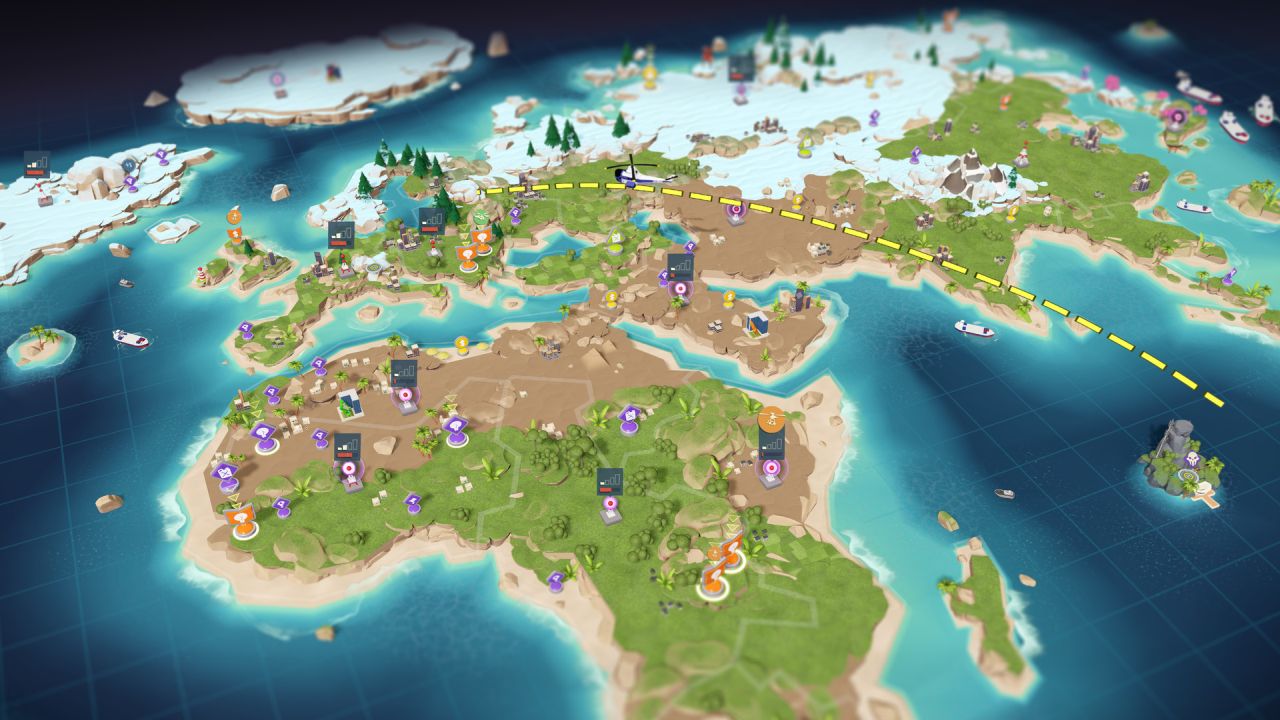 Alongside the main story, you also have plenty of side missions to complete. These missions often have a multitude of characters to deal with. One side mission can be the hiring of a henchman, dealing with agents, a rivalry with a crime lord or even stealing some loot. You can steal things like the Declaration of Independence and they each come with their own set of conversations. Most of these missions do boil down to completing missions on the world map but the mini narratives are entertaining on their own.

Once I learned how everything worked, I turned to sandbox and didn’t look back. The game becomes much more fun when money is no object and you can spend your time building an incredible lair with hundreds of minions doing your bidding. You can’t complete any missions in sandbox mode which is a downside, but the overall gameplay is improved by it.

Humour and charm purveys throughout Evil Genius 2. Every character comes with traits which could be useful, such as wearing armour or having a strong right hook, or they could be silly. I had one minion who was a dedicated Lyre player. Yes, the Ancient Greek Lyre. Even character names can be funny as it’s not every day you can say you interrogated a Mr Bratwurst. All of this informs the tone of the game, a silly, fun and humorous romp through a 60s inspired spy pastiche which doesn’t take itself seriously.

Evil Genius 2 is a good-looking game with a cartoony art style and a wide-ranging colour palette to keep things interesting. All rooms have their own distinct colour, making it easy to differentiate each room type by sight. Everything looks right at home with the pseudo-sixties aesthetic and the minions are well designed. You can identify every minion type, even when flying through your base and it’s fun just watching them go round on their routine. Evil Genius 2 does give you an option of island lairs to rule the world from, however, there isn’t much variety in the design. They’re all tropical and look the same. There are some variations in location, heat gain and building size but that is it. It does feel like a missed opportunity to have a snow or moon base. You can’t even have a volcano lair.

Praise has to be lavished on the soundtrack. The composer from the 2004 original, James Hannigan, returns for Evil Genius 2 and he knocked it out of the park. It has a 60s Bond spy thriller feel to it but with a dastardly undertone. It sets the scene of the game and it is truly a great score and I may have been humming along to it while I was playing the game. 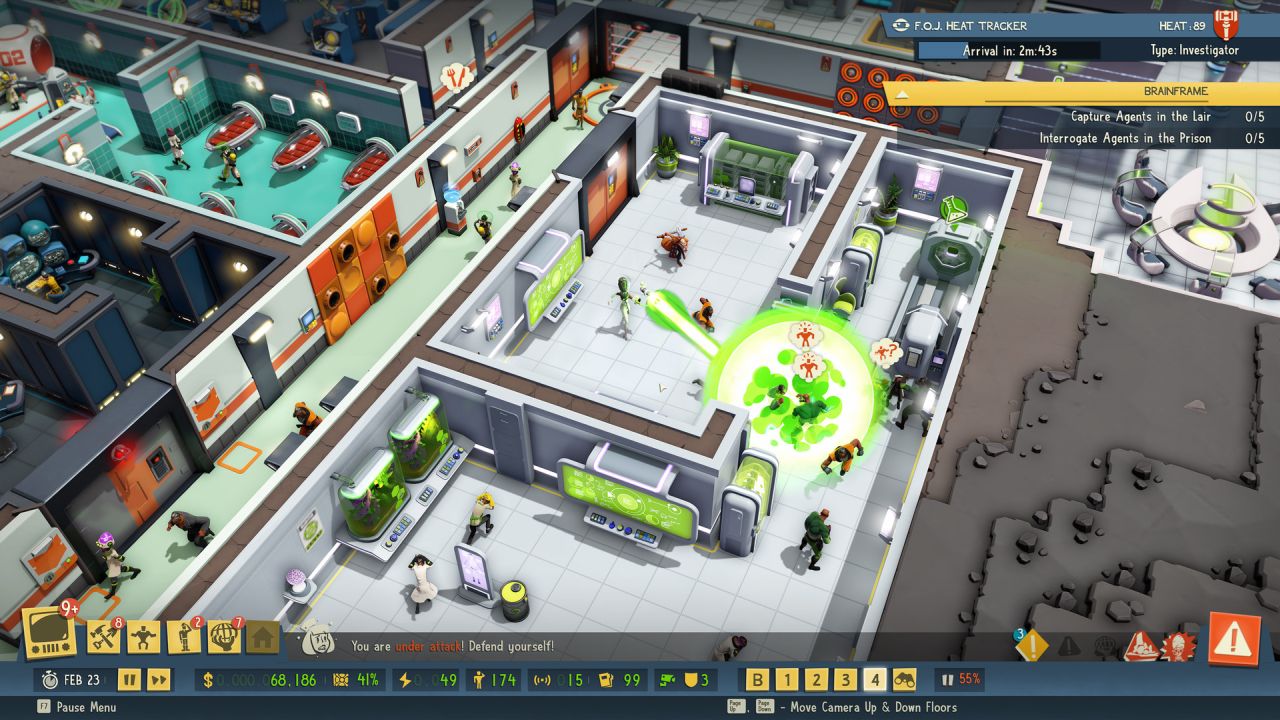 I had no real performance issues while playing Evil Genius 2. Even when the game got crowded with minions, agents, tourists and plenty of activity, it rarely stuttered or had any issues that I could see. I did encounter some glitches during my time such as characters merging into walls but those moments were few and far between.

Evil Genius 2: World Domination is a fun game which allows you to live out any Bond villain/Dr Evil fantasies. The soundtrack is particularly fantastic and the base building gameplay is fun and engaging. There are some issues with the minion AI, agents and investigators being more nuisance than challenge and a lack of variety in base locations and types, but it doesn’t stop Evil Genius 2 being fun. There is nothing like running a well-oiled evil empire and having the lair to match.

Our ratings for Evil Genius 2: World Domination on PC out of 100 (Ratings FAQ)
Presentation
85
The 60s style and vibrancy makes Evil Genius 2 come alive. Every minion is visually distinct and the art style compliments the tone. James Hannigan’s soundtrack is stellar.
Gameplay
65
Evil Genius 2 sticks with the Dungeon Keeper-esque base building gameplay. The minion AI can get annoying and investigators and agents are a nuisance.
Single Player
80
The campaign has great voice acting and a fun narrative. The side missions add more charm and humour. The sandbox mode is the best way to play with no restrictions.
Multiplayer
NR
None
Performance
(Show PC Specs)
CPU: Intel Core i7 11700k
GPU: GeForce RTX 3070
RAM: 32GB DDR4
OS: Windows 10 Home

80
Even at crowded moments, the game runs well with no stutters or frame rate issues. There are some occasional glitches but those are rare.
Overall
72
Evil Genius 2 is a fun, charming game which allows you to run an evil empire from your secret island lair. Despite some issues, the gameplay holds up to be a worthwhile experience.