Does the new Prince of Persia game successfully recapture the gameplay from The Sands of Time or is it just another game destined to be forgotten?

Prince of Persia: The Forgotten Sands is a return to the old style platforming seen in Sands of Time. Using a tried and tested combination of combat, platforming, and the odd puzzle it does do a pretty good job bringing players back. Sword combat is enjoyable but fairly easy even against scores of angry Sand monsters. Platforming consists of many small skills used in quick succession and relies often on pressing buttons mid-air to create your own ledge or pole to latch onto. You can rewind time once again but this feature plays second fiddle to being able to freeze water and replace ancient walls as you leap about the palace. Does the balance of these elements work well together? Do they create an enjoyable ride through a palace full of traps and ghastly creatures or does the gameplay become repetitive and uninteresting? 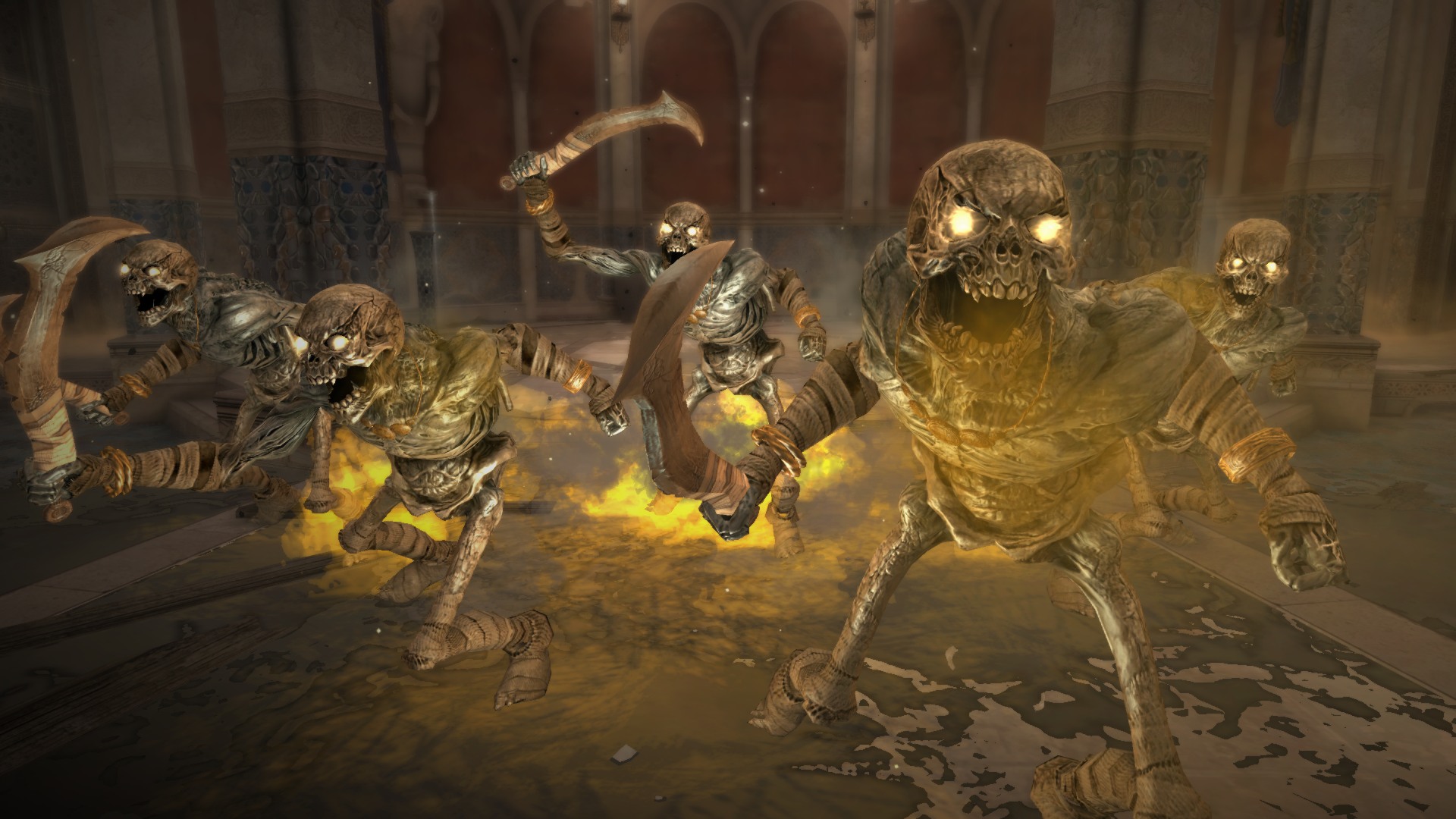 There are two major differences between the gameplay in Forgotten Sands and that in Sands of Time. Platforming has changed slightly and in this case it relies on correct timing of button presses with your jumps rather than always waiting for the timing of some external object. You proceed quickly and may have to freeze water or recall ancient structures each with a single press. The difficulty rests in timing the button presses with jumps mid air or when running along walls. There are still standard trap sections which employ simple timing and movement requirements without the ability to freeze water or recreate matter. These trap like segments are generally the hardest in the game but are placed strategically and are often short in length.

The second difference is linked to the combat and its relative ease and gameplay purpose between the platforming segments. In Sands of Time the combat was difficult and later in the game somewhat frustrating. Forgotten Sands goes in almost the other direction where the combat is easy and relies on only a few moves to take down different enemy types. It is also the best place to stock up on health and energy. You’ll often be taking on dozens of Sand army enemies from skeletons to flying beetles. You will still die more during the sections involving a wide range of traps than during any combat scenario. Throughout the combat the Prince gets access to some gimmicky powers like ice and fire attacks, all which are quite helpful. These use your precious energy orbs that are required to rewind time so it’s risky to use them all up. 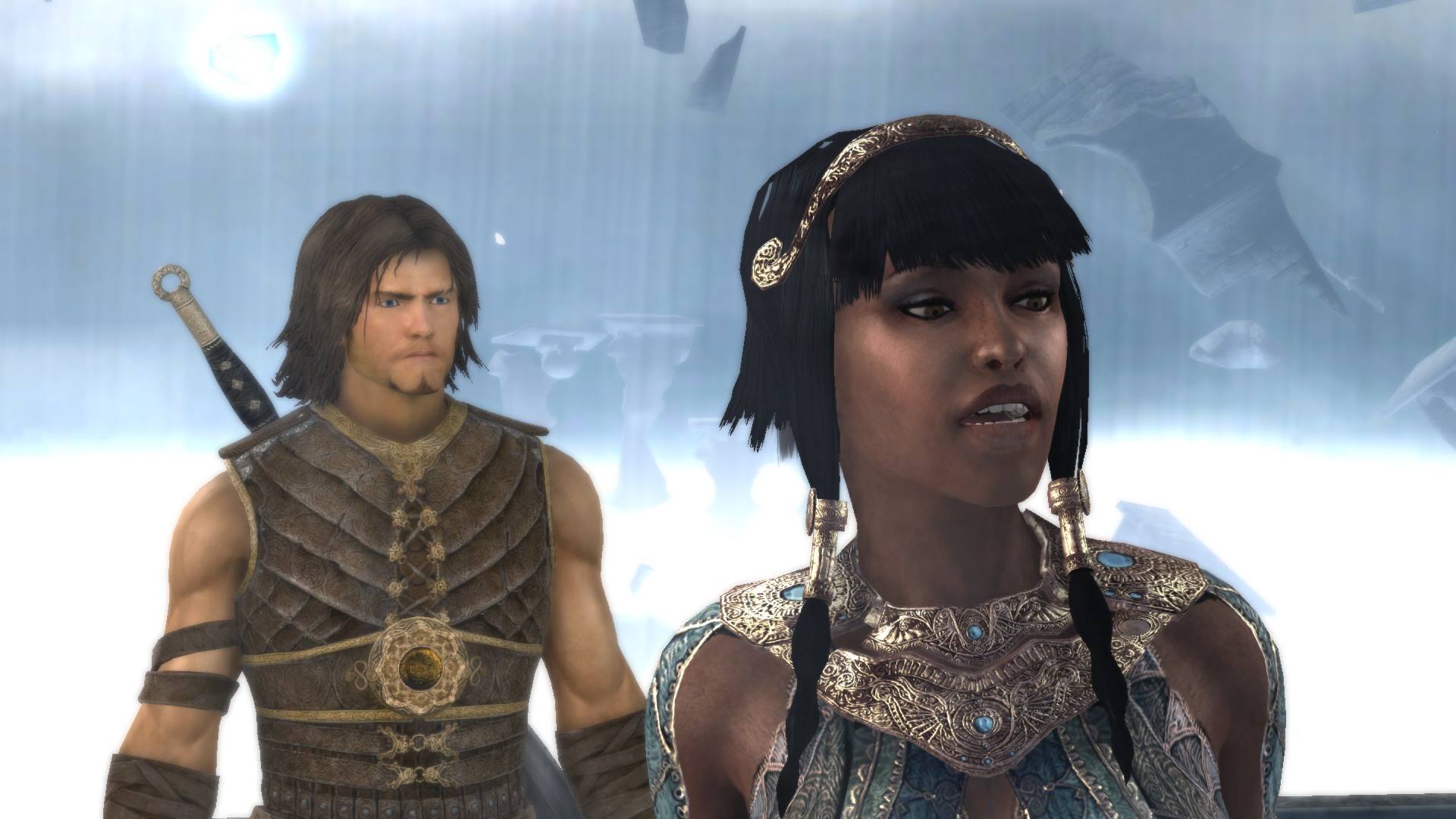 Most of the dialogue occurs between the Prince and Razia

The Prince picks up health spheres from his enemies and from random pots hidden in corners of the palace. You also get energy and experience spheres for disposing of creatures trying to do you harm. The energy spheres allow you to rewind time and use combat powers. Experience points you gain are used to unlock powers and improvements in health or features like being able to rewind time further. The powers don’t have a huge impact on the combat, they ensure the battles are over quicker but are not required. Because most of the spheres are collected during combat the game balances how often you receive each. There are usually ample amount of pots in between platforming if you get low on health after running into a deadly trap.


One issue that still has not been resolved in the new Prince of Persia game is the related to the camera. Although to be fair this time it hinders less and probably unfairly helps the player it still gets caught on itself. The camera locks in position for certain jumps and leaps that have been pre-set by the level designers. Early the jumps are easy and the directions are obvious but gradually the combinations of elements stress the camera positions. More than once the camera locked on in such a way that made my next target extremely obvious when it should not have been. Almost no thinking is required for your next step along a wall or between ledges when the camera locks in this way. Occasionally the camera position will make a direction less obvious. Something more suited to a gamepad where slight changes in direction are done more easily. 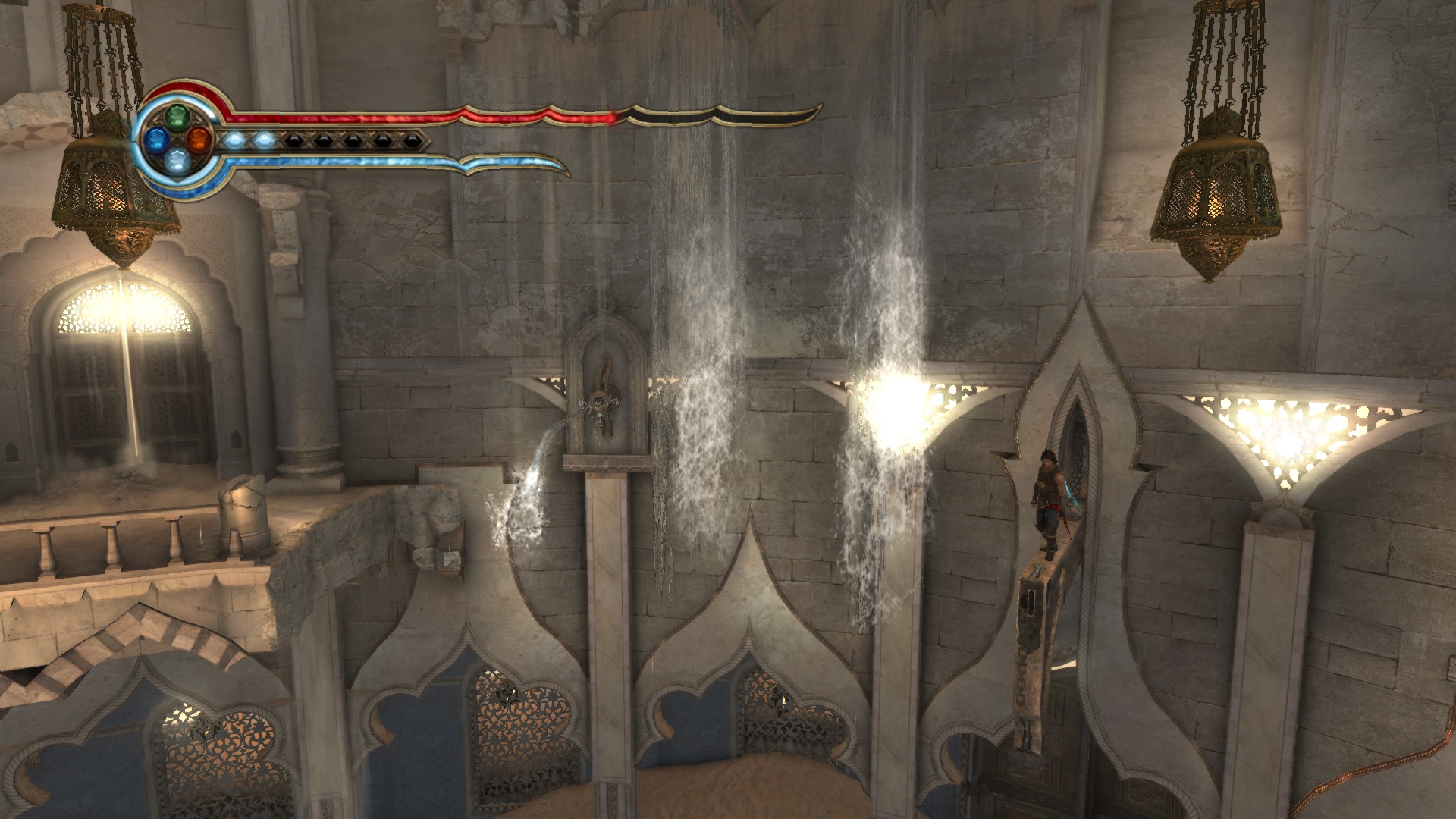 Run up a waterfall? Sure no problem.

Unlike the previous PoP game you can perish in this version but the saves are pretty generous and the game isn’t difficult on Normal. It’s rare to be completely out of energy orbs so you’ll be able to rewind from a death more than a few times on trickier parts. The Prince will be alone for almost the entire length of Forgotten Sands, even though he occasionally comes up with something to say to bring his personality through. The last few levels change things a little bit and introduce much harder platforming segments requiring near perfect timing between frozen and unfrozen water. Due to the open layout the last sections will feel somewhat familiar to the end parts in the 2008 Prince of Persia title.

Fortunately this time the Prince won’t be backtracking through areas and it’s much less of an adventure game and more a straight platformer. The story develops slowly, just like the platforming, and more lengthy dialogue and information bleeds through as the jumping becomes more complex. The story finishes relatively well with all loose ends tied up. The more enjoyable sections were those which featured several key presses as you pounce towards an object that doesn’t even exist yet. Hanging from a water spout only to leap through a waterfall which you later use as a wall is certainly refreshing.

It is probably apt that the game title includes forgotten in the name because it appears the game will suffer that very fate. It is even more of a shame that the game suffers this fate undeservedly so. Although the puzzles are simple they are well placed and rarely overused. Staggering the platforming, puzzles and combat has been done well and the game is rarely frustrating or tiring. Visually the game looks quite impressive with well crafted tombs and traps, good sounds for battles and water spouts. The physics engine copes quite well when the poor Prince runs into a swinging cleaver or falls onto ground spikes. 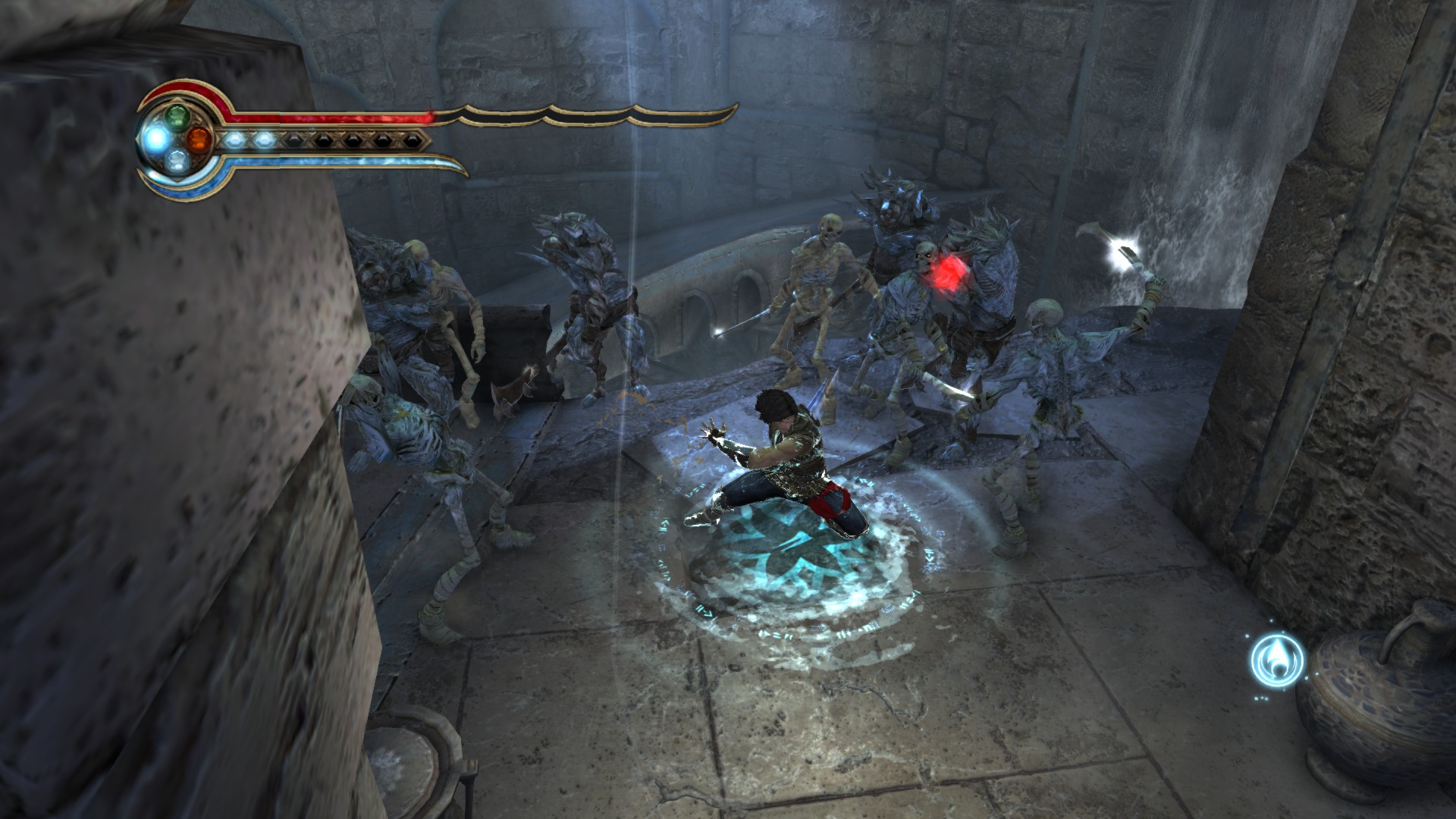 You put your right foot in. And you shake it all about.

Forgotten Sands is a good game, there are no overly long sections and there is only excessive repetition when a new elements need to be introduced. The dialogue is also well voiced and presented in an interesting fashion. Uplay is once again used as copy protection which includes storing your saves elsewhere. Luckily just like Assassin’s Creed 2 and Splinter Cell: Conviction the connection never failed during my seven hour play through. If you have enjoyed the previous Prince of Persia games, especially Sands of Time, then this game should definitely not be forgotten.

81
Runs really well at all times with a good visual payoff, very fast load times and mostly good controls, some camera issues. 360 controller works well.
Overall
80
Forgotten Sands may not revolutionize the genre but it rarely makes a bad step. The enjoyable combat and the quick platforming sections are well worth checking out for long time Prince of Persia fans. 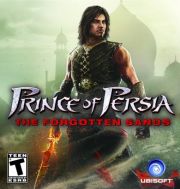 All videos for Prince of Persia: The Forgotten Sands (3)
Advertisement ▼