I used to enjoy following politics in college, I obsessed over the Obama/McCain election, making chocolate chip cookies to bribe my friends into watching debates and news coverage with me. Then, not long after that, I grew tired of it. To some - watching politics is a pastime, reading the latest polls is the equivalent to reading the scores of a baseball game. Sure, you may care about certain policies or ideas, but a lot of political coverage boils politics down to a very “us vs. them” mentality - again, something more equivalent to a rivalry between two sports teams. It's always bothered me, because behind poll numbers and data points are people's livelihood and suffering, behind every sound bite is injustice and discrimination. In some ways, strategy games have always had the same flaws - more concerned with scoring points than people's welfare. Civilization doesn't really care whether or not your GDP has grown, or if you've suffered a recession, and it certainly isn't interested in telling the mini-stories within those moments. But those stories, small as they are, are important to the people who live through them. 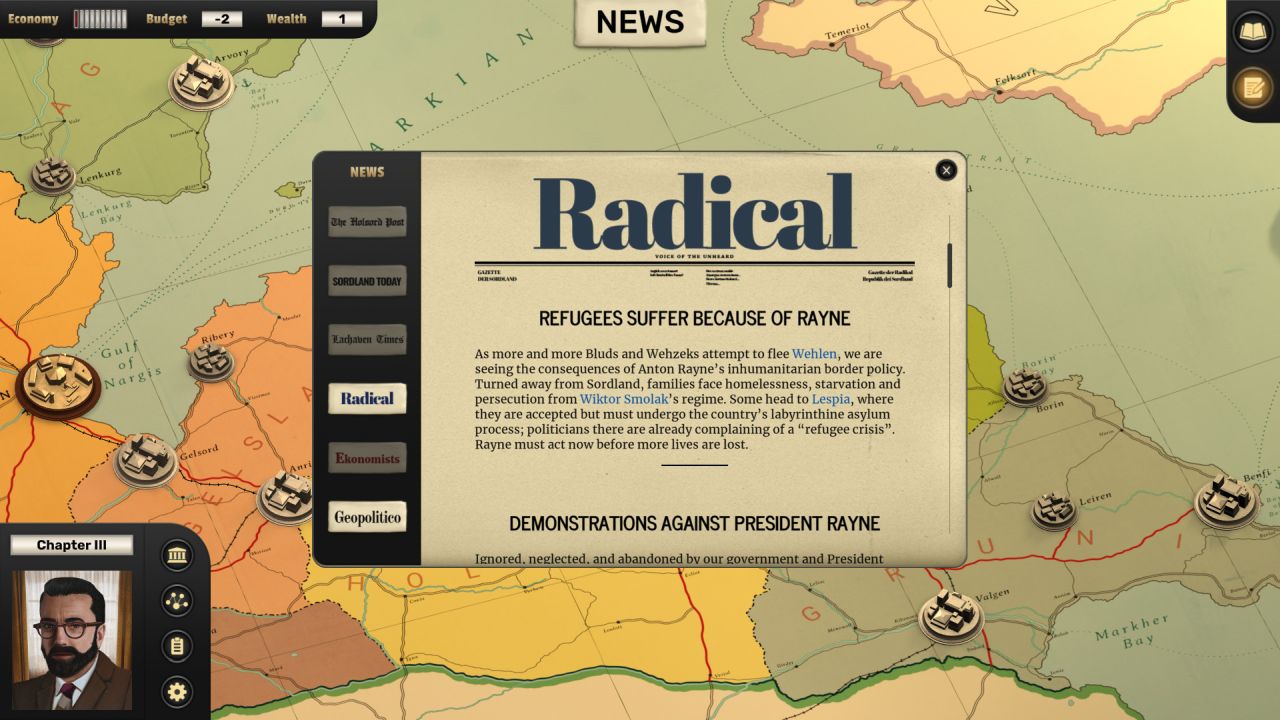 This is where Suzerain, the first effort from Torpor Games, wildly succeeds. Telling the story of a European nation in the burgeoning days of democracy, Suzerain attempts to not only explore the decisions behind political leaders but how those decisions can be swayed and affected through interpersonal experiences. It's a game that tries to inject humanity into politics, which these days feel like a herculean task.

The campaign follows Anton Rayne, the fourth elected president of Sordland whose rise to power is covered in the prologue. Sordland has been through a lot in the last decade and as Rayne comes to power, he will need to determine how important democracy is to him. Should he ally himself with the military and seek to control the country through intimidation? Should he play ball with the ultra-capitalists who would like him to open the country to free markets? Should he invite the powers of the east or west to ally with the country and protect them from other foreign invaders? The actual story varies wildly based on what your strategy is and the choices you make.

The outlook isn't great when you take over. The country finds itself in the midst of a recession and in a precarious place politically. The stakes feel high and that's a credit to the writing team. The fictitious world comes to life thanks to the well-defined universe. There are stand-ins for the USA/USSR conflict in the 1950s and certain historical events might feel familiar, but none of it feels too ripped from the pages of a specific history book. The payoff is a complex political world that you can learn much about, but always feel a little uncertain when making a choice. The game also doesn't look too cheerily on the near-future of Sordland. Fighting political battles for modern ideals like equal rights and education will cost you dearly. Suzerain doesn't give you many points for being an idealist and maybe that's fair. Political idealists rarely make savvy politicians and the game is conscious of that - constantly asking the question of what you're willing to sacrifice in order to win re-election. 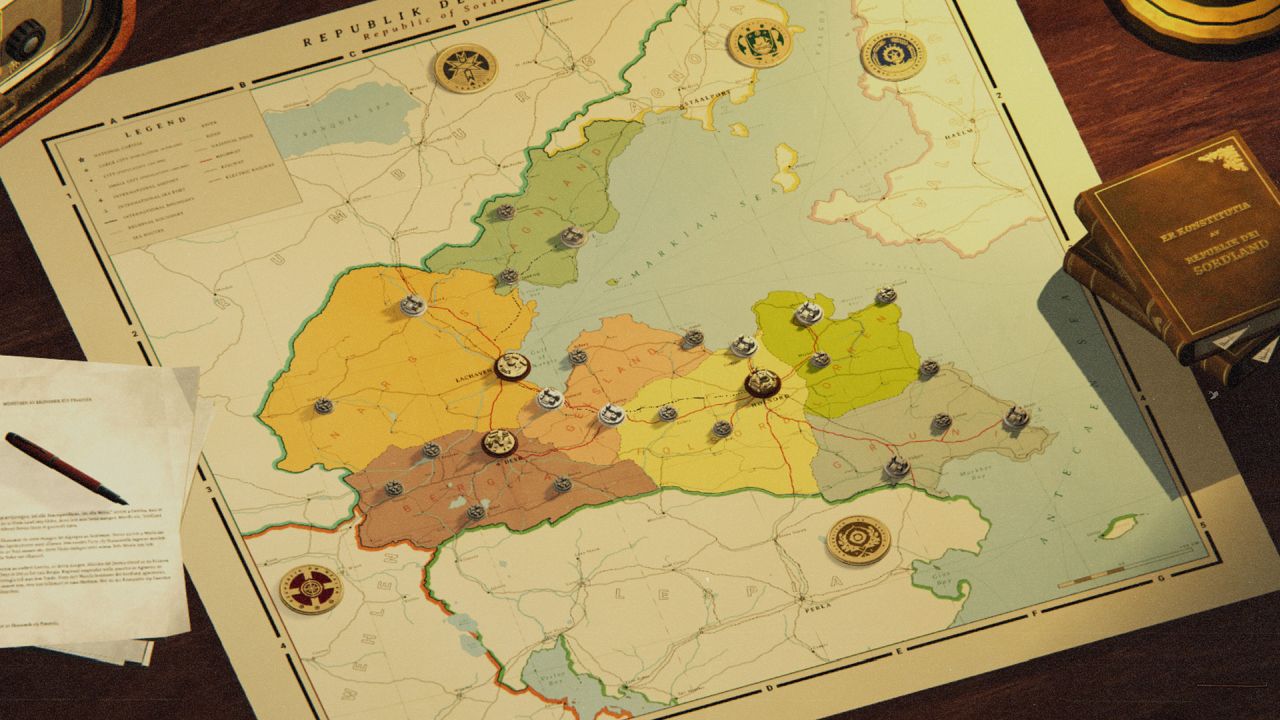 This all plays out like a visual novel set against the backdrop of an RTS. The majority of the game takes place over a giant map of Sordland - much like a strategy game. The UI is designed like that as well, allowing you to quickly look up the details of political affiliations, a codex of information, and other details you can use to make informed decisions. However, the game doesn't track time or rounds the way strategy games would, but through dialogue and conversation. There are hundreds of thousands of words in Suzerain and while one could argue all the dialogue is superfluous, it adds weight and context to every decision you make - making Suzerain something unique.

You're not just choosing whether you're going to spend your infrastructure budget on a new highway or railway - you're deciding if you want to listen to your crotchety advisor who used to be a rural mayor or trust your economic expert who may have unsavory side-dealings. The actual dialogue isn't always great and there are some beats that are a little too much, but simply having these conversations contextualizes so much of Suzerain. By the time your bills are voted on or re-election comes up, you feel the weight of the work you've put in and the decisions you've made. That's really all there is to the game - dialogue options and decisions on whether to veto or sign a bill, choose a government contractor, or if you should investigate a potential scandal. Still, clocking in around 10 - 15 hours, the game is meaty and there are multiple endings/paths your presidency can take, so there's an incentive to replay.

The weak point of the game is probably the art design. Some of it is alright - the colors and tone of the art help set the mood. However, the budget comes through in how simple the design is. The soundtrack is a series of somber electric guitar tones that feel a little out of place in a political drama set in the 1950s. There are almost no animations or actions to speak of, just boxes of text and dialogue that pop up. It's not bad, just unremarkable. A little more sound-design might have gone a long way here. A presidential theme or political jingles - cartoons, something that would have helped give life to the text, aside from the text itself. 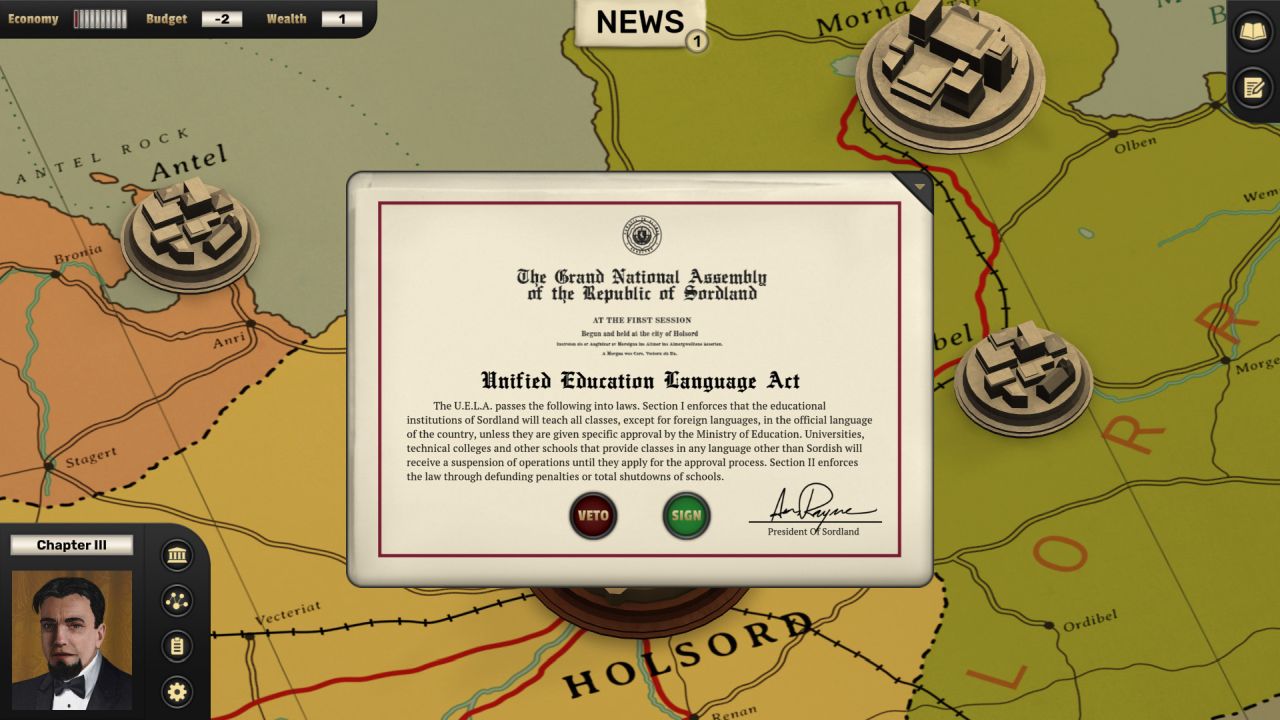 Technically, the game is smooth, loading quickly and saving effectively after every choice, to prevent you from save-scumming your way through. It's a humble effort, but effective.

Conceptually, thematically, one has to be impressed with Suzerain. It's doing so much with so little. Powered by endless dialogue trees and choices, the game manages to tell a compelling, politically fraught story of a burgeoning republic in the early days of the cold war. You could dismiss the game as a choose your own adventure, but the way the game fills your screen with interesting tidbits of information and important codex entries makes it such a deep and compelling world, fully realized with the little complexities that many governments are still wrestling with today. I find myself craving more of Suzerain because I enjoyed so much of what the game is trying to do. I left Suzerain affected and thoughtful, a little more wary of how difficult decisions can be when the fate of a nation rests on your shoulders.

Our ratings for Suzerain on PC out of 100 (Ratings FAQ)
Presentation
55
Easily the weak point of Suzerain, there's not much to grab onto in terms of how the game looks and sounds.
Gameplay
80
The choices and dialogue options are interesting, but the strategy game-worthy UI adds a layer of information that helps you navigate the complex world of Soderland.
Single Player
85
This game hit me hard. I won't spoil what happened, but I was crushed by the end of my playthrough in a way that rarely happens.
Multiplayer
NR
None
Performance
(Show PC Specs)
CPU: Intel Core i5-3570K
GPU: Nvidia GeForce GTX 660
RAM: 8GB
OS: Windows 10 Home 64 bit

90
No issues observed.
Overall
76
Suzerain is a fascinating game told through incredibly dense and detailed writing with effective pacing and smart world-building. Its unique mix of player choices against a strategy backdrop make for a compelling adventure, even if presentation aspects are lacking. A game that is designed to challenge whatever political ideology you hold. 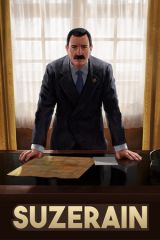