Fastest fingers in the West

It's not every day that you see a review for a game that focuses solely on typing, but here we are. I can count on one hand the games I know in that genre. That number can still be counted on one hand with the release of Typing Fingers – Enemy. It bills itself as a game to fight illiteracy and dyslexia. As such, the target audience is clearly a younger generation. However, I thought a game such as this could improve my typing speed and perhaps could give me skills I could use in the future. Unfortunately, it didn't pan out that way. 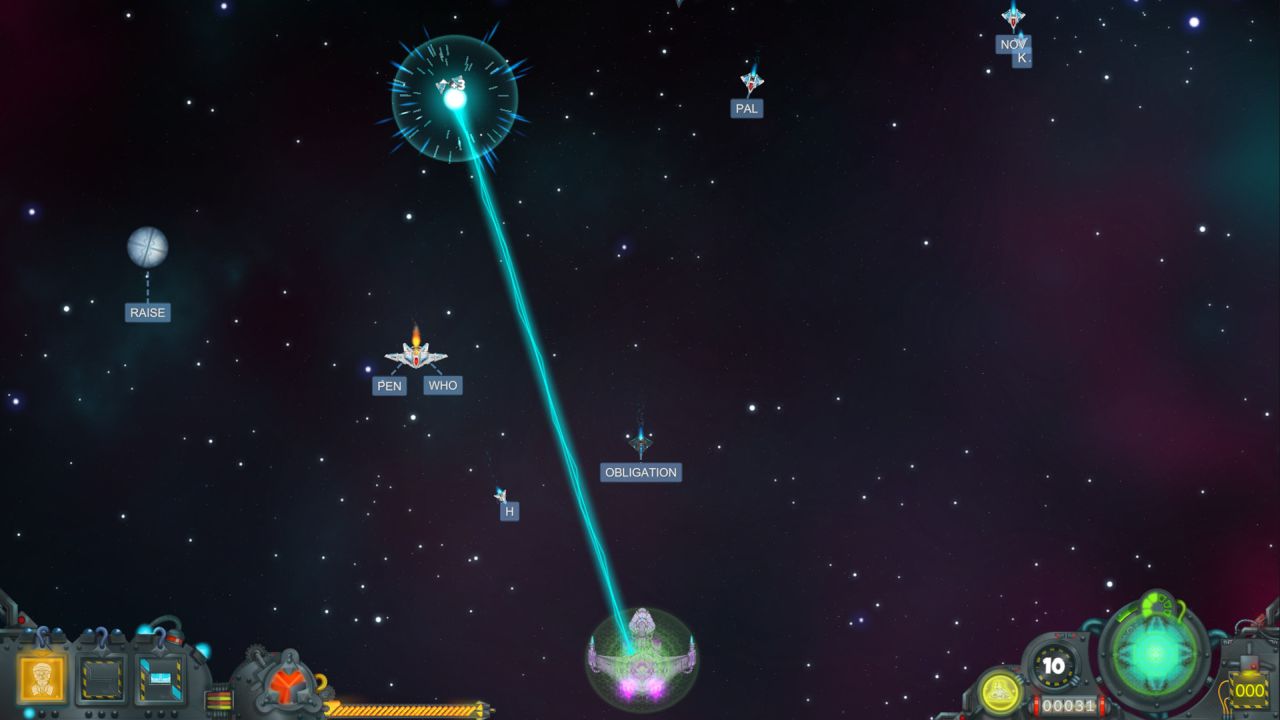 Being a game aimed at a younger generation, the story is straight forward and uncomplicated. A hostile alien race has come and taken control of the human fleet and you're the commander of an experimental ship. This means you're the only one who can take on the enemy. Each level sees you destroying any alien presence in each sector. Occasionally, a level will also tell you that you may be liberating a planet or chasing an alien signal. You don't ever see any of this and you're only told by other characters what's going on and what the consequences of your actions are. It feels like a missed opportunity to make the story more engaging by actually showing you objectives and making you complete them.

The second way the story is conveyed to you is by radio chatter during each level. You usually receive transmissions from a human soldier and eventually receive alien transmissions as well. The aliens aren't that interesting and just seek to destroy all humanity. Pretty basic really. However, these transmissions usually end up being unintentionally funny. The game doesn't utilise voice actors and instead seems to use a text-to-speech program instead. Just think of Microsoft Sam as a voice actor and you know what to expect. This has the consequence of every subtitle being taken too literally. If the subtitles denote static over the radio for 3-5 seconds, then the character will literally state "3-5 seconds". They read out onomatopoeia as well. The funniest incident was when a character was supposed to be asleep. As such the subtitle read "Zzzzzzzzzz" as you'd expect, except the character actually vocalised the letter "Z" over and over again. Even for a game aimed at children, it's hard to take it seriously.

The mechanics of Typing Fingers are interesting but not in a good way. Gameplay itself boils down to correctly and quickly spelling words on screen to destroy enemy ships that carry them. That is self-explanatory and hard to get wrong. You also have three special abilities. The first is an atom bomb which destroys all enemies on screen, an ability to slow down time and a laser which destroys enemies in one hit. These abilities come in handy, especially when the screen gets so crowded that it becomes impossible to type your way out of it. The problem is, the abilities don't always work. On multiple occasions I tried to use the abilities during a tense moment, and they didn't work. No matter how much I tapped the buttons, nothing happened. Because of this, I died far more often than I should've done and it is beyond frustrating. Once you restart a level, the abilities miraculously work again until you reach the same section and they stop being usable. These sections normally correspond to the difficulty spikes. When the game starts throwing stronger and more numerous enemies, usually all at once, the inability to use these powerful weapons makes it almost impassable. It caused me to walk away multiple times. 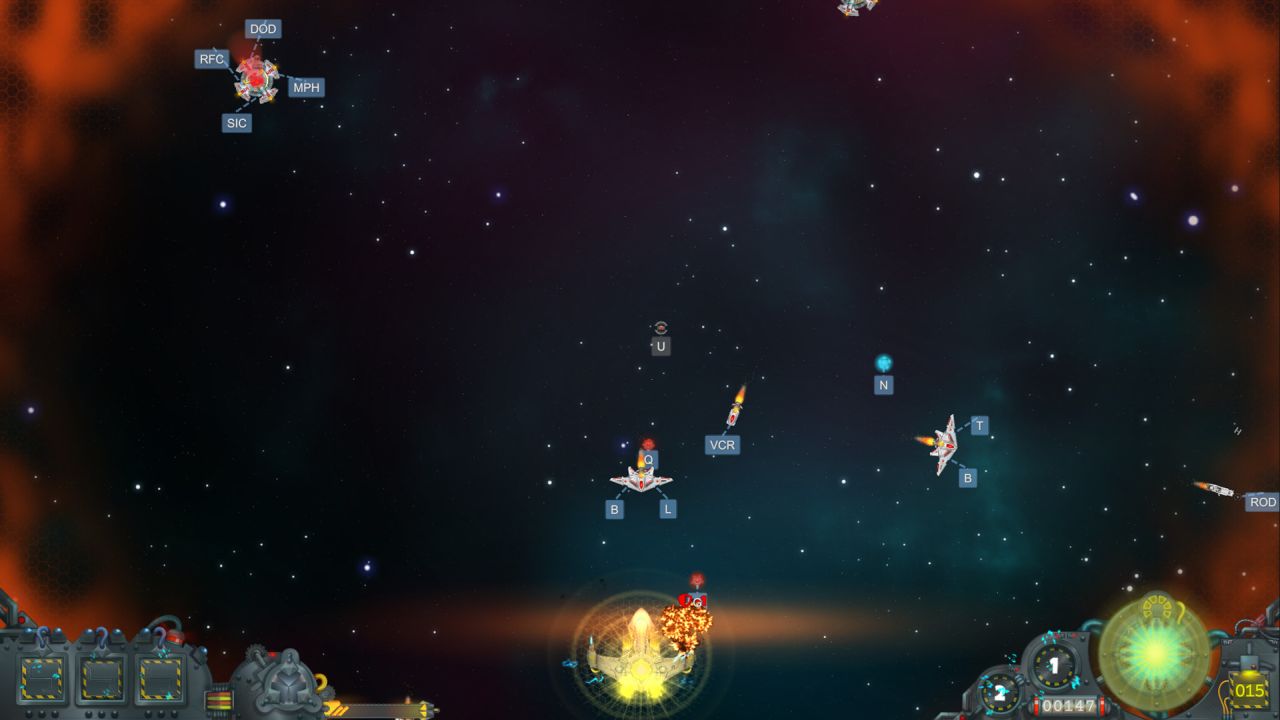 With power-ups, there is a basic upgrade system for your ship. You have 3 main categories such as Weapons, Ship and Computer. Weapon upgrades include making the atom bomb more powerful and increasing the amount of time you can slow down. Ship upgrades include health, shields and reduces the cooldown for a defence laser you have. Computer upgrades increase the number of power-ups you can store and reduce the time for you to gain one. These upgrades are carried out with a currency you earn throughout each level. The game is generous with the amount of currency you get and upgrading is a quick and easy task.

For a game about language, it is surprising that there are no language options. It is only for those who use American English. There's not an option to change to British English let alone any other language. Another issue the game has is how it saves your progress or, more accurately, doesn't save any progress. Whereas other games usually checkpoint, autosave and give you a manual save option, Typing Fingers is inconsistent with when it saves your progress. I got up to level 7 before I got frustrated and decided to take a break. I assumed that since I had upgraded my ship and completed all these levels it would've saved. Imagine my anger when I booted up the game again to find out I was back to the first level.

I played past that original level before I took another break. For some reason, when I restarted the game, my progress from the first level had saved. It had only saved my completion of the first level with its own free will. For the most part, it appears you can only complete this game in one sitting and that's if you get through the levels where your power-ups don't work. It is genuinely baffling how there is an absence of any save system in this game at all with whatever progress it does save being at random. 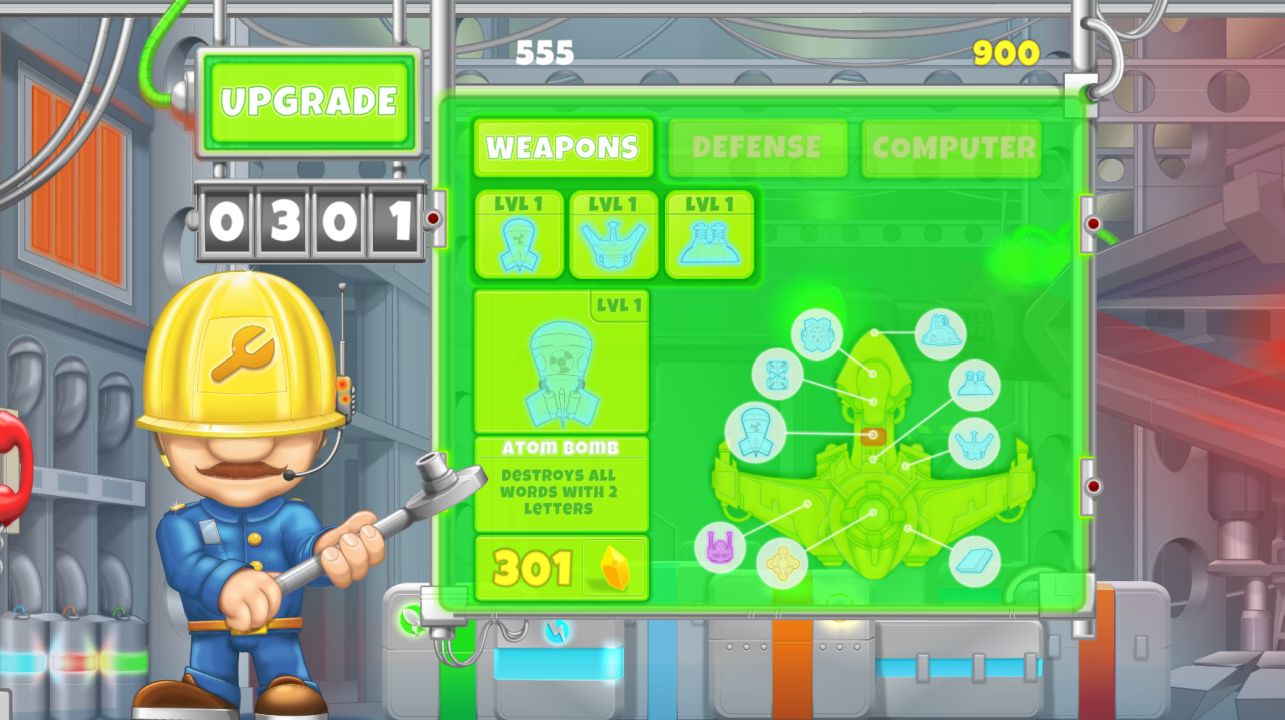 With Typing Fingers – Enemy it is clear that children were at the forefront of the design. There are lots of bright colours and every human character you see would look right at home in Toy Story. In fact, the game goes too far and with so much vibrancy it can get straining on the eyes. The UI isn't that well designed either. Save for the main menu, most of the buttons you see to navigate around each page aren't labelled. You can only find out what each menu button does by clicking on it which is counter-intuitive. This lack of labelling and information also applies to everything else the game shows you. At the end of each mission, you're given a bunch of medals but the problem is I don't know what the medals are for. A whole bunch of numbers go up on a category but I have no idea what the numbers represent. There also appears to be a battery number on the upgrades screen but I don't know what it's attached to or what it denotes.

I also have to mention that the game has a decorative button. On the side of the screen is a button marked "feedback". I assumed this would open a link to the developers and you could suggest options to improve the game. I actually tried to give feedback but the button doesn't work. It's ironic that the button to message the developers about how to improve the game doesn't function at all. It's amusing and indicative of how this game is broken in many places.

The game also suffers in its performance. For the most part, the playing experience is smooth, but when the game gets a bit more cluttered, I did notice dips in the frame rate. This is a notable hindrance in a game that relies on precision and the dips in the frame rate makes it difficult to actually read the words properly. This problem compounds the issue with the power-ups and makes the difficulty spikes all the more infuriating. 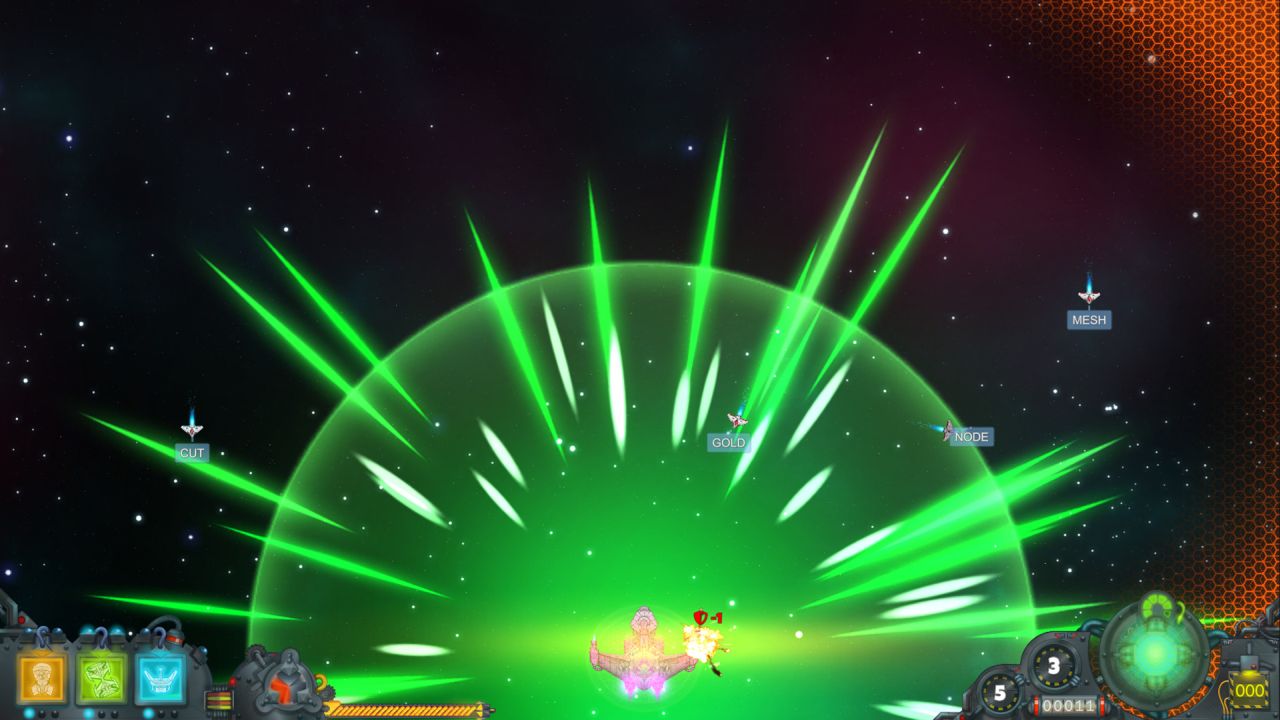 Typing Fingers – Enemy is disappointing. The power-ups break at certain sections of the game, with no warning, making the difficulty spikes more like something out of a Souls game, but unfair. The UI is incredibly unhelpful and offers you as little information as possible and the lack of language options limits the usefulness of this release to North America. The absence of any save system also makes this game tedious to play. It's a shame as it could genuinely be a helpful tool to those who struggle with spelling and typing, but it seems as though the game wants to push away anyone who wants to attempt playing it.

Our ratings for Typing Fingers - Enemy on PC out of 100 (Ratings FAQ)
Presentation
42
With bright colours and toy-like characters, the game is vibrant but overly so. The voice "acting" is a simple text-to-speech programme with unintentionally hilarious results and the UI is dense and unhelpful.
Gameplay
33
Extremely simple, just involves typing the necessary words as quickly and as accurately as possible to destroy the enemy. Difficulty spikes are near impossible with broken power-ups. Lack of language options limit the game's audience.
Single Player
50
Simple story about aliens who want to wipe out humans. Easy and digestible for younger audiences. Story is poorly delivered through text and dialogue.
Multiplayer
NR
None
Performance
(Show PC Specs)
CPU: Intel I7 11700k
GPU: GeForce RTX 3070
RAM: 32GB DDR4
OS: Windows 10 Home 64-bit

30
Unstable performance, especially when screen is cluttered with enemies. Frame rate dips often cause game overs.
Overall
38
Typing Fingers - Enemy is a broken game which is unlikely to help in the fight against dyslexia and illiteracy. It's a chore to play and poor save system makes completing the story a slog. 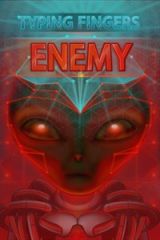