Narrative driven puzzle games are often in a difficult position. On the one hand, puzzles serve as the sole source of actual gameplay and so must be both interesting and challenging enough for the duration of the game. On the other hand, the story can't be neglected, and must be compelling enough to motivate the player to complete more puzzles. Filament succeeds in striking this balance between a compelling story and entertaining puzzle solving, and does so in a way that encourages the player to think creatively about how both puzzles and story alike will resolve. 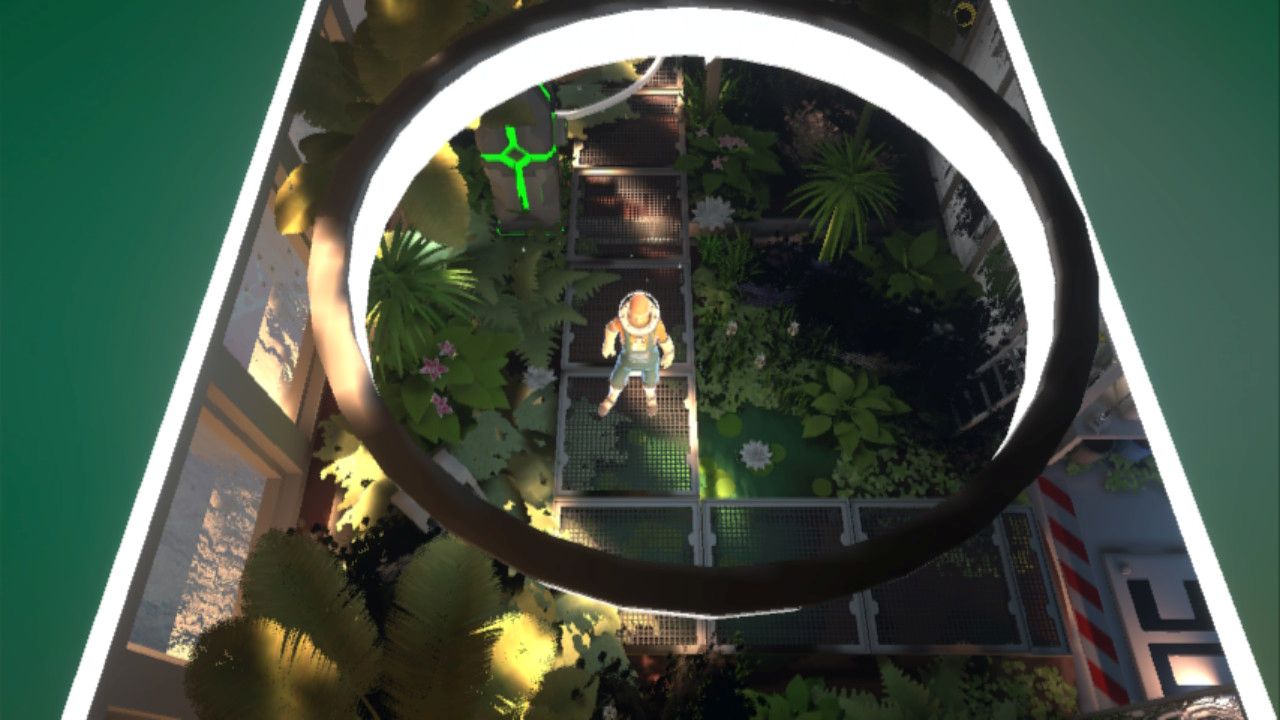 As seen from an entirely top-down perspective, you have found The Alabaster, an abandoned ship left floating in space. Upon boarding, it seems that one crew member, Juniper, remains trapped in the cockpit. In order to rescue Juniper and get the ship running again, you must repair ‘anchors', mysterious mechanisms whose purpose isn't immediately clear. Each anchor contains groups of puzzles in which you assume control of a tiny robot to connect and wrap around numerous pylons with a glowing wire.

Anchors can be attempted in almost any order, with the option to exit out of puzzles and return later at any time. For this reason, there is no gradual increase in difficultly but instead puzzles can be very hard right away. In fact, a good number of puzzles in Filament are tricky, with solutions that won't be obvious and may require a good deal of trial and error. The inclusion of a rewind button which, when held, quickly withdraws your rope and zips your robot back to the start of the level makes this process a lot less gruelling.

If the player is really struggling, hints can be enabled from the menu along with a warning that doing so will prevent access to specific trophies. If trophies don't matter to you, asking for a hint will reveal where you may have gone wrong in a puzzle by presenting a red light over incorrect moves, and a green light over the next correct move. However, since there are multiple solutions to puzzles, hints can often derail your progress in order to suggest a different, specific way of solving the puzzle. Players should also be aware that hints can only be requested twice in one puzzle, and as someone who is frankly very slow when it comes to puzzle solving, I wish there was an option to enable unlimited hints. Despite this, if you're feeling really desperate you can always exit out of the anchor and re-enter, thereby resetting the hints and allowing you to request two more. This can potentially be abused, though it would destroy most of the fun and satisfaction of solving a tough puzzle.

In order to keep gameplay intriguing, new types of puzzles are introduced quickly and add an exceptional amount of variety to the simple concept of wrapping wire around posts. For example, while the first few puzzles centre around merely turning grey pylons white, the introduction of bright, luminous colours not only adds visual intrigue but also an extra layer of complexity, as now certain colours need to be matched or avoided. There is also the introduction of using second and third robots to pilot around, forming constellation shapes, looping wires a specific number of times, pylons which move, and a lot more variations on this basic wire-puzzle format. If you ever feel tired of a certain puzzle because you've been labouring over it for too long, exiting and attempting a new type of puzzle freshens the playing experience. This is what makes Filament so addictive at times, as there is an ongoing intrigue as to what sort of puzzle you'll encounter next. 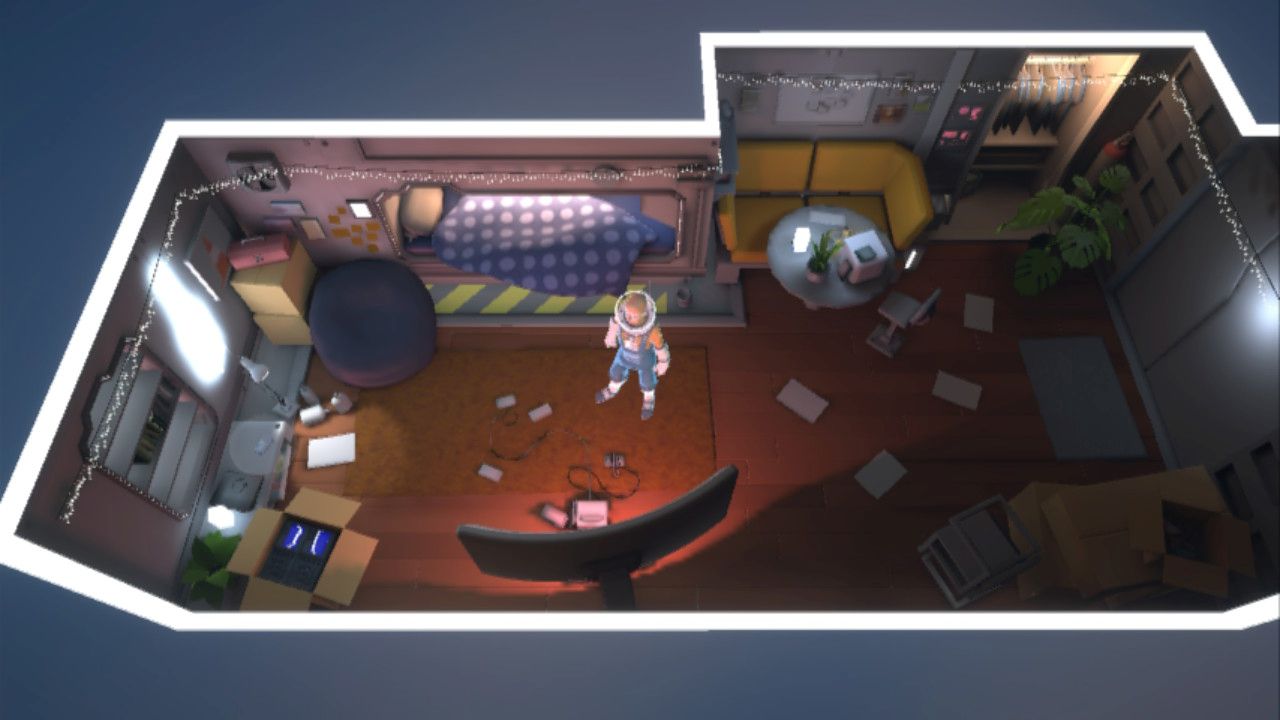 And you'll get plenty of experience with each type too, as there are three sets per puzzle type. Within each set, there are five levels; the first two levels are usually easy, intended to show you a new puzzle mechanic. The next three levels then become increasingly harder, and so on. Every puzzle type has its own aesthetic, and each is charmingly unique. Since pylons are contained with a room, the walls and floor will be decorated to suit the puzzle. The constellation puzzles have you moving across a starry skied floor, other puzzles stick to a simpler geometric pattern, and some even feature dynamic moving paint splotches which aid in solving the puzzle they surround. This dedication to crafting fascinating environments is highly appreciated since you'll be spending a lot of time in these puzzle rooms, which could quickly become stale otherwise. It is a dedication which continues to the overworld of the game – The Alabaster.

The ship is huge and a joy to explore. Each room has been lovingly created to be either as cosy or sci-fi looking as possible, containing a mix between the clinical nature of working for a space corporation and the intimate and comfortable lives of the crew who lived there. Each room is extremely detailed, with every item of furniture being meticulously placed to tell you something about the crew who once inhabited the ship. There are objects littered about the craft which can be interacted with and examined in close detail. Each of these objects hint at the difficult lives of the crew, and give the sense that this ship has been lived in. Some item interactions are also accompanied by narration from Juniper about their significance. There are three levels to the ship, each containing numerous anchors and rooms to explore – and as these rooms are explored, it becomes clear that something strange has happened on The Alabaster. Uncovering the truth of this is the driving force behind the narrative.

For as charming as the ship is, there is a distinct lack of variation elsewhere. In particular, the soundtrack for Filament is disappointing. Music is very limited; there are tracks which sound nice and spacey, and do add ambience to your actions, but these are repeated and looped over and over, and it didn't take long before I was sick of each track. This doesn't make gameplay unbearable, or even boring, it's just frustrating that Filament seems to check all of the style boxes everywhere else, but fails in this regard.

Filament performs well, and I encountered only a few bugs during my playthrough, such as the robot becoming stuck on a corner and unable to rewind back, and two instances where pylons not touched by anything were lit. Occasionally, the voice-overs were low and became drowned out by the soundtrack, though this seemingly happened only at the start of the game. 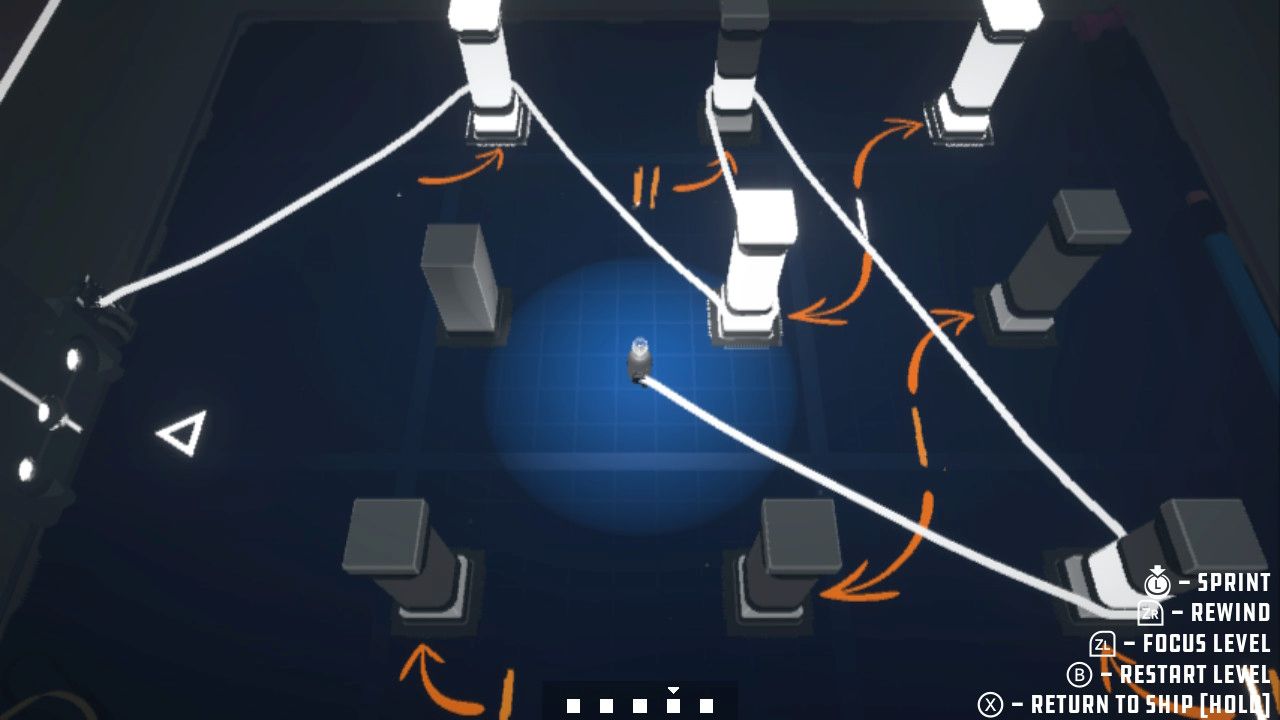 The story of Filament is delivered in two ways. The first is through voice overs from a single character – Juniper. This runs the risk of the player becoming uninterested in her interjections and interruptions, but she is charming and likeable enough that this is never the case. Juniper usually has something to say after every anchor is solved, and her comments are a welcome injection of humour into the long stretches of silent puzzle solving. The second means of delivering story is through a series of very dense crew logs, which can be accessed via computers scattered around the ship after finding collectible key cards. These logs follow the style of corporate emails, and feature interactions between the crew members throughout their mission on The Alabaster. Despite being extremely lengthy, these emails are well written and often humorous, and build up a strong sense of all the characters involved despite never actually hearing from them. I would have liked to have seen the main story delivered in other ways than just lengthy blocks of writing, and since these logs are optional, the player may be missing out on the wider story if they choose not to read them. However, if you do read the logs, you will find that most of Juniper's narration becomes redundant, as a lot of the information she tells you about the ship is contained in those logs.

This is where a large disconnect between the story and puzzles seem to occur, as although the puzzles and story by themselves are engaging, the two rarely seem to interact together. For example, nothing aboard the ship really changes as anchors are solved. You might expect certain doors, mechanisms or computers to unlock or become accessible after solving puzzles, but this is not the case since all areas of the ship (except two) are accessible at all times. As such, there isn't much sense of progress during the game. There is a map which reveals how many anchors have been solved, but since it is not necessary to solve every anchor on the ship to reach the ending, there is no sense of progress until the narrator seemingly spontaneously decides to say you're either half-way done or finished. This lack of awareness for progress repeats itself when at one point, you will be sure that you're almost finished only to find there are quite a few more new puzzles to solve. As for the ending itself, I can't say I was satisfied by the ‘answer' to the mystery of what happened on The Alabaster, but I suspect this was an intentional choice to leave the player pondering their own version of what occurred. The result, especially considering the amount of build-up, is a fairly lacklustre ending, and if you spend a long time working through this game you may feel disappointed by the vagueness of it. 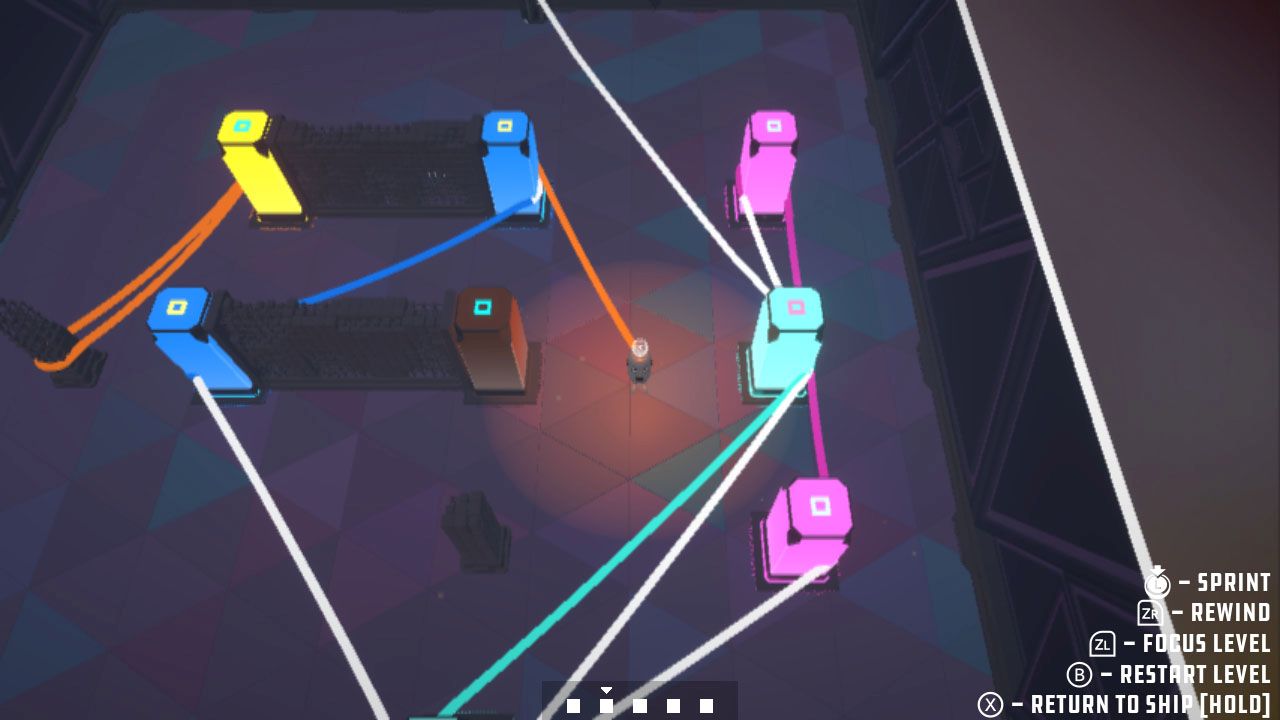 Overall, Filament is something of a slow burner, grabbing your attention the more you play. There is a lot of content, and you likely won't have finished every puzzle after completing the story, leaving you free to go back for more. There is a wide variety of puzzle types to play through, and exploring the various ship environments is an enjoyable, if melancholy, experience. Filament is a solid game to dip in-and-out of for challenging puzzles and pretty visuals.

Our ratings for Filament on Switch out of 100 (Ratings FAQ)
Presentation
75
With a cosy yet futuristic space ship to explore and some very visually pleasing puzzles to solve, Filament is always a treat to look at. It is held back only by its repetitive soundtrack.
Gameplay
77
There is a wide range of variation on the simplistic puzzle concept of connecting pylons. Puzzles are challenging but never feel impossible, and there are enough levels to keep you busy for a long time.
Single Player
67
The story is interesting enough to keep the player invested, but its means of doing so is somewhat clunky. The ending may leave some disappointed and others intrigued in its vagueness.
Multiplayer
NR
None
Performance
70
A few minor bugs encountered.
Overall
70
Filament is a fun puzzle game with wonderfully detailed environments to explore. Despite some storytelling issues, it should keep puzzle fans entertained for some time. 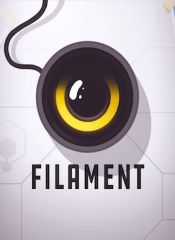