We talking or we racing?

Video games based on movies have developed a fairly negative reputation for themselves over the past few decades. It's certainly not for the lack of trying - we've had games based on everything from the seemingly easy-to-adapt franchises such as James Bond and Cars, to the more challenging efforts of Aliens and Men in Black. Unfortunately, most end up being quick cash-ins for the studios that are more focused on promoting a franchise than creating a good video game. There are exceptions, of course, but they are rare. Despite the Need for Speed franchise offering plenty of inspiration, we've yet to have an enjoyable game from The Fast and the Furious franchise. Even as the movies in this series hit records at the box office, the games have been lackluster - The Fast and the Furious in 2006 and Fast & Furious: Showdown in 2013 were both poorly received. Sadly, the newly released Fast & Furious Crossroads continues on the same negative trajectory.

Although it was meant to tie-in with the launch of the newest film, Crossroads opts to have its own story. The events take place after the Fate of the Furious movie, as Letty and Dom are on the tail of some terrorists who plan to attack the US in the near future. They find their man, and their next clue leads them to Madrid, where Letty travels alone while Dom strangely decides to go back and visit with his young son. In Madrid, the story introduces new characters, Vienna Cole (Sonequa Martin-Green) and Cam Stone (Asia Kate Dillon), working in the towing business after fleeing a tragic event back in Miami. Vienna's boyfriend Sebastian finds himself in debt to the mob organization known as Tadakhul, and drags the two women into his problems. Vienna reaches out to Letty for help, thus making the two narratives interconnect and eventually put this local crew together, with Dom and Roman Pearce also joining the action.

As far as Fast & Furious and/or racing game narratives go, Crossroads is pretty typical. You aren't going to find any brilliant writing or engaging dialog here, though that's not something to be expected anyway from this genre and this franchise. The one positive is that the actors at least reprise their roles, giving some authenticity to the project. Their delivery is often pretty flat though, again not unlike the films - but in this case it stands out more, since there is so much dialog that occurs over radio. Their character models are also a bit off - it looks close enough to the actors, but they were obviously not face scanned.

While the story is passable, unfortunately things only go downhill from here. The single player campaign mode is split up into a series of linear levels, where you're driving to a destination across a couple of different urban and rural environments. The levels are entirely linear, as all side streets and wrong turns are arbitrarily blocked off, and you don’t even need a map nor are you given one. This sort of tight design is a tricky proposition in a racing game, because unless you're on a race track, it just feels unnatural and claustrophobic. It's like what a "walking simulator" is to a traditional adventure game. Few have attempted such a design, like Need for Speed The Run, for good reason.

After creating such a limited game world, the game has the audacity to re-use the same sections a few times. Further to that, the campaign can be wrapped up in under 4 hours, and almost half of that is cutscenes. And yet there are still strange gaps - at one point, the crew agrees they need fresh cars, and in the next scene you're already racing out of a car dealership. Like a transition was missed on how they got there. So it's very poor value for your money, even with multiplayer - which we'll touch on later.

Not only are you severely limited by where you can go and how you get there, but you also don't get to choose your ride. In a story-focused campaign such as this, you'll be swapping between the different characters in each chapter, and they all drive whatever their favorite or available car is. The selection is limited but at least it's licensed cars - 2017 Acura NSX, 1969 Camaro Yenko, 1973 Mazda RX-3, 1971 Plymouth GTX, 2019 Dodge Challenger SRT Hellcat, 1973 Datsun 240Z and others are in the game. But worst of all, regardless of your ride, you'll be putting up with the same atrocious controls. Crossroads is a very arcade racing game, and that's fine - but the cars handle very poorly and inconsistently. They slide and drift all over the place, oversteer and understeer whenever they feel like it. Sometimes there are slow-mo moments, as if the controls can handle you making minute last minute adjustments to avoid a collision. It doesn't help that there is only a single, fixed close-chase camera angle for the entire game.

There's just no fun to be had in driving, and it's often simply frustrating. So while you'll crash a lot, there's not much punishment as your car has a single basic health bar. However, to provide some variety, the campaign splits up its missions into a few types. In non-combat chapters, you will simply drive somewhere, often with an arbitrary reason that adds a timer or a damage limit. When the action kicks up, you get access to your NOS boost ability, a sideways bash, and a Special. The Specials range from a rocket gun, to a grapple, to an EMP - all depending on the mission, and all are very simple to use. There are also occasionally moments when other crew members join you, and when the game allows it, you can switch between the crew members in order to get access to their car and ability. There's a somewhat decent damage model for the cars, which is surprising given they are licensed. 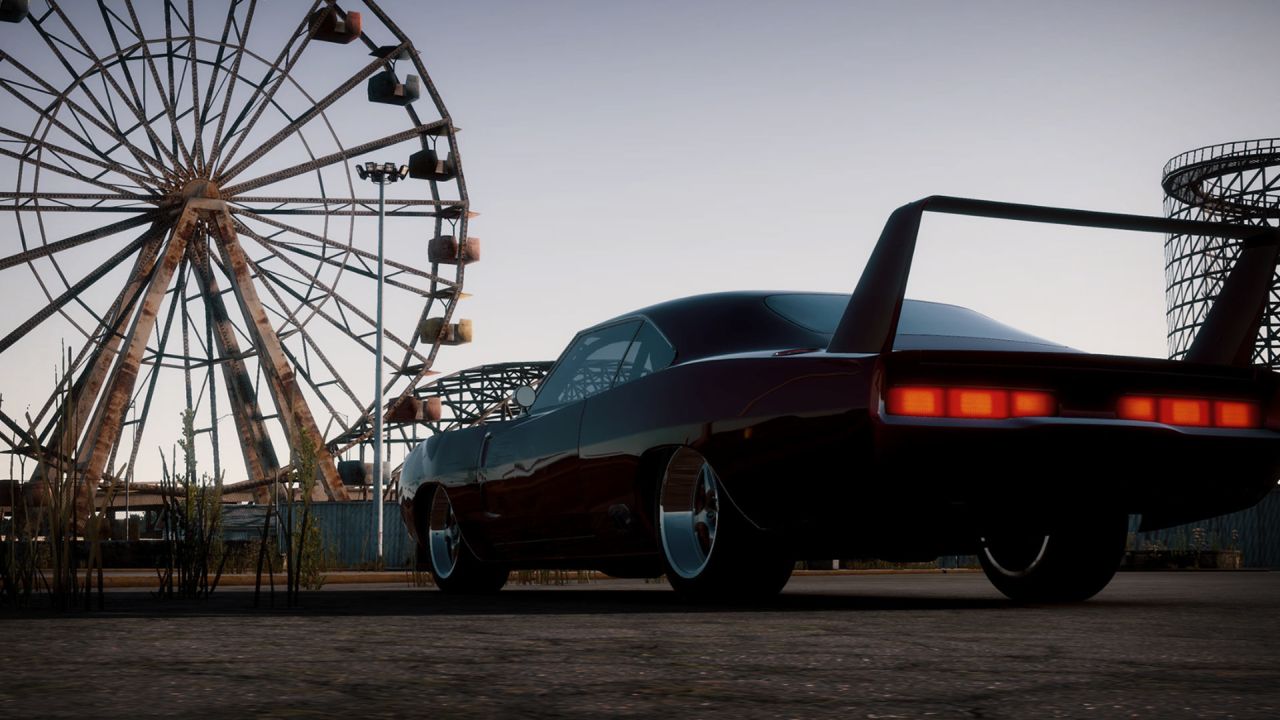 There are no difficulty options, so the game opts to be on the easy side. The enemies you will encounter - whether it's the mob or the cops - are pushovers. AI for both friendly and enemy cars is barebones, and will sort of wait for you if you crash into debris again (as it often happens). The most noteworthy part of the combat is dealing with the annoying driving mechanics, and the hilariously touchy physics. You'll see yours and other cars fly across the sky, perhaps inspired by the F&F franchise, but in reality just glitched out from a bad collision.

At this point, you might be thinking - perhaps the presentation is at least decent? Well, at least the actors showed up. And some of the animations during cutscenes are alright. The soundtrack features the typical F&F mix of rap and latino beats. But sadly, the rest of the game's visuals leave something to be desired. Running on maximum quality settings, the game looks dated, and low-budget. The textures vary in quality from average to poor, the detail in the game world is severely lacking, and there is no effort to at least make the game cinematic. For example, during missions with no combat, that game doesn't even bother to remove the UI and simply leaves empty boxes where your abilities show up, as well as an empty character select wheel. There are immersion breaking issues too - the game loves to place random industrial debris and emergency vehicles on the roads, as if there's a roadside accident or construction every mile in this world. Nobody also blinks an eye when you play destruction derby with civilian traffic during non-combat missions. And as for audio, the engine noises and most of the sound effects are underwhelming at best.

There are additional issues you'll have to deal with on the PC version. This is such a barebones port that the game lacks any sort of visual settings beyond a few presents, which don't even show what they change. While there is mouse support in menus, and it's playable with a keyboard, all of the prompts appear as controller buttons. You have no way to see what your corresponding bindings are, let alone change them. While it performs OK on maximum settings on higher end hardware (Ryzen 3600, Radeon RX 580 8GB), it's not exactly a great looking game. It also crashed a number of times, despite the short running time of the campaign.

In hopes of adding some value, Crossroads does offer a multiplayer mode. Unfortunately, for PC players this comes with a big caveat - there's nobody actually online. After idling in matchmaking for hours during the launch weekend, we managed a total of three races. It's not a great start and it's unlikely to get better, so unless you plan to sucker in some friends to get the game with you, the multiplayer mode can be entirely discounted from the PC version. At least this particular issue can't be blamed on the game - the online portion has a decently robust design. You can finally pick what car you want to use - they are split into classes, and each has their own stats and unique Special attack. The matches themselves are an intriguing 3v3v3 format, with Cops, Villains, and Hero teams. The Villains and Heroes are usually fighting over an AI objective travelling across the level, while the Cops are trying to knockout either team. You still have to deal with terrible handling and even more physics collision glitches, but at least there was potential here. By levelling your profile, you can unlock new cars and visual customizations (paint, license plate, wraps, etc). But again, for PC, multiplayer is a non-starter.

It's disappointing to see Fast & Furious Crossroads fail so miserably at such a relatively straightforward adaptation. On paper, this project actually had legitimate hope - Vin Diesel did great work previously with The Chronicles of Riddick, and Slightly Mad Studios have plenty of experience creating decent racing games. But whether due to timing or budget constraints, the end product is just all around poor. It's poor value for the money, it looks and sounds poor, the PC port is extremely barebones, and the gameplay is just well below average. Without a movie to back it up (delayed due to the COVID-19 pandemic), Crossroads has been sent out into the world to seemingly perish. There's nothing of much value here for fans of racing, or Fast & Furious.

Our ratings for Fast & Furious Crossroads on PC out of 100 (Ratings FAQ)
Presentation
40
The game looks decent enough - if it was a mid-budget effort with an appropriate price point. As a full release, it's quite dated.
Gameplay
30
The controls are all around poor, and the simple action mechanics are not fun. Physics are glitchy and the AI barely functional.
Single Player
40
A fully linear driving game is always risky, and Crossroads fails to make this design work. The story is bland and the campaign is very brief.
Multiplayer
50
Although it seems decently designed, the online is empty on PC.
Performance
(Show PC Specs)
CPU: AMD Ryzen 5 3600
GPU: ASUS Radeon RX 580 8GB
RAM: 16GB DDR4
OS: Windows 10 Pro 64-bit

40
The game has a wealth of bugs, PC-specific shortcomings.
Overall
35
Fast & Furious Crossroads just can't get anything right, becoming yet another licensed movie tie-in that fits the negative stereotype. The presentation is dated and actors reprising their roles is but a small consolation. A brief and very linear campaign with poor gameplay offers terrible value for a full priced release. The PC version suffers further, with empty multiplayer, instability, and barely any options. 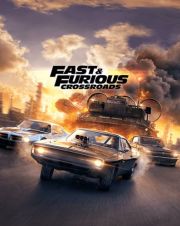