Every game asks something from players in exchange for its own brand of entertainment, and some ask more than others. Fighting games demand quick reflexes to produce visceral combat. Strategy games require forward-thinking and management for satisfying conquest. Horror games require nerves of steel to make players feel alive. Even walking simulators want players to hold the forward button to give them a story. Someday You’ll Return is not a walking simulator, although it features a lot of that activity in the woods of a fictional location within the Czech Republic. It’s an adventure-horror mix that combines Blair Witch, Amnesia: The Dark Descent, and The Vanishing of Ethan Carter into a strange concoction. But this is one journey that asks too much from the player, including patience for its drip-fed story and tolerance for clunky gameplay, and fails to give enough in return. 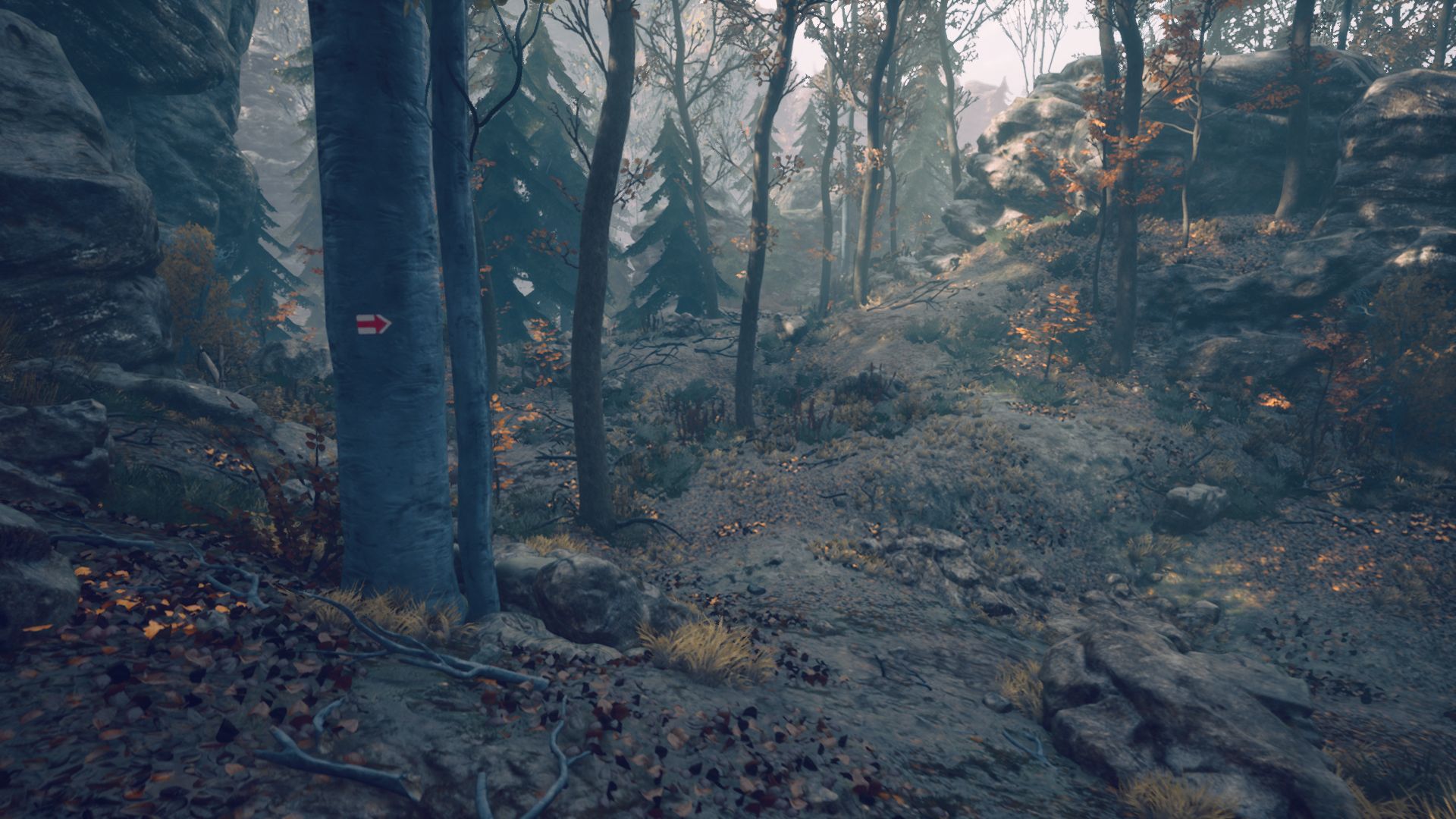 The game begins with a simple premise: a father is looking for his daughter. You play as the father, Daniel, and head to a remote forest region after a phone call with your daughter, Stela, is cut short. Apparently Daniel put a tracking app on Stela’s phone and has experience navigating the woods, which we learn about as the game progresses. But after he loses her phone’s location, finding Stela in the forest is going to be like finding a needle in a haystack.

Luckily the haystack is color-coded. Red, blue, yellow, and green trail markers help Daniel progress down the right path as he searches places like a church, campgrounds, power station, castle, and a dark mysterious bunker that keeps appearing out of nowhere. Not all the routes are unimpeded either. Daniel’s phone has a basic map to keep track of your location and orientation, although it is taken away from the player for a time and not essential. Characters call you via the phone and some are roaming the woods, including a young girl and an old woman that talks in riddles. With their help you stumble upon Stela’s diary. It provides more clues, although many of its pages are covered in gibberish that can only be deciphered by exploring further.

This is not a simple search and rescue; there are missing pieces to this tale. What is real and which parts are from Daniel’s past? Who are these people in the woods and why do they know so much about Stela? Why does that bunker keep appearing? Who is the shadowy figure that roams the bunker’s hallways? The story drops clues, sparingly. It’s also one of those games that never answers everything, setting itself up for discussions within the community. The narrative would have been better if the voice work was more polished, as several of the characters stumble with delivery. Even the dialogue is odd in the conversations. But at least the story stays ahead of the player and remains interesting, often driven by the reveal of the diary. 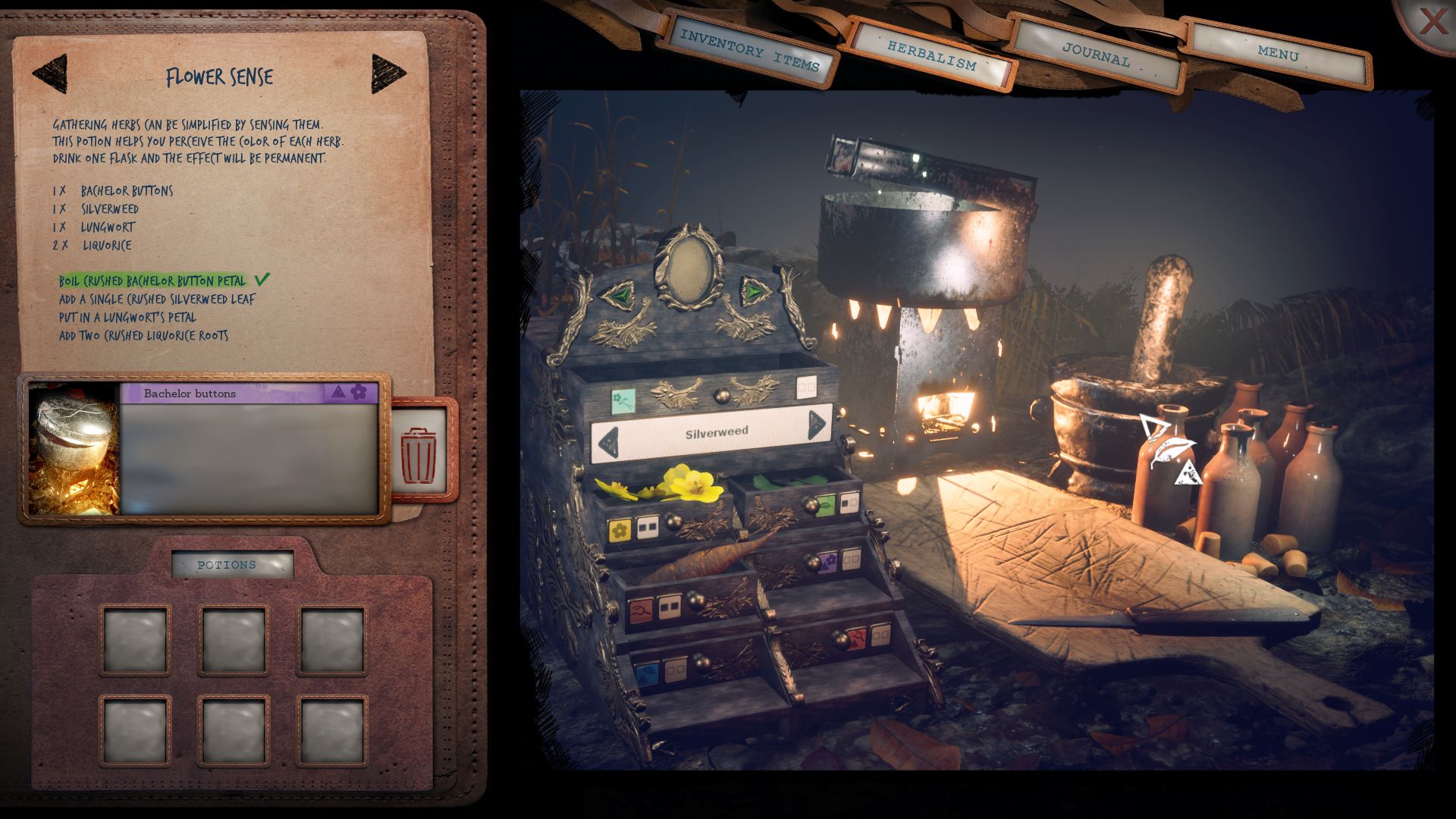 Potions are required to read all of Stela’s encrypted diary pages, and they are used for other tasks. There is a neat potion interface where you can take flowers, cut them, crush them, and mix them into a broth. The recipes have to be followed or the brew is ruined, and then you must pick more flowers. Thankfully one potion highlights flowers permanently. The most valuable potion, from a story perspective, is the one that gives access to snippets of Stela’s past, represented by swirls of dust. These are just voiceovers that unlock diary pages, but they often pair nicely with the surrounding environment and mirror Daniel’s current objective. Another potion calms Daniel so he can cross perilous ledges without passing out. Depending on your thirst for story, and whether you listen to the crazy old woman, two of the potions may be frequently concocted in the last few hours. But the speed at which they can be mixed means the potion element is not much of a hassle.

Along with potions and walking, there are quite a few puzzles to solve. Some puzzles require the use of Daniel’s toolkit—screwdriver, pliers etc. You can construct things, like nailing rungs onto a broken ladder, and you can also pull things apart, like using the knife to create rags from cloth. These basic interactions work well enough but are only part of it. When the game gives directions is when it falls down the hardest. In the campgrounds there is a written task to find three metal rods from nearby. After locating all three, two of the clues still made no sense. Some puzzles get stupidly abstract, like when you need to find the door code in the power plant. There are too many times when it is unclear what the game wants the player to do.

But this is also a horror game and there are occasions when it just wants to scare you. From time to time the forest transforms into a dark landscape with concrete chunks strewn about and webs of steel rebar squiggling across the landscape. Some paths are blocked by corruption and must be cleared by stabbing enlarged hearts. These parasitic vistas are like a fevered dream and call attention to Daniel’s sanity. Often you are forced to walk through endless corridors (like those from the bunker), and occasionally there is a humanoid figure that gives chase. But the game never falls into a rhythm with scares or chases. It merely creates a grim landscape to put players on edge and almost never hurls them into the abyss. The scariest moment happened early, when coming across the first of those metal rods, and it was more subtle than the game’s dark twisted levels that are overused late in the story. 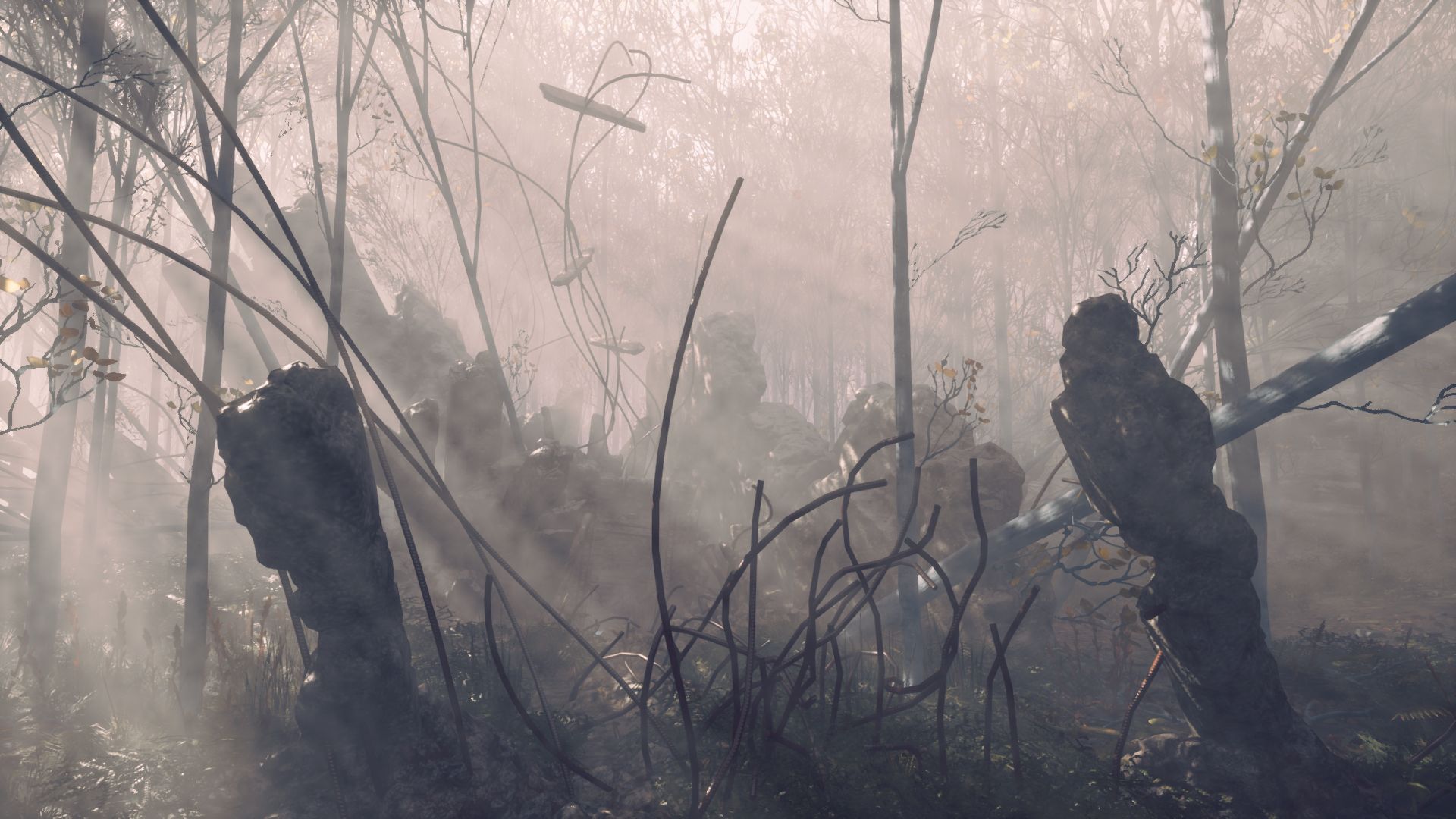 Stealth is sometimes required in these dark worlds, although it is crude like the early Penumbra games. A few child-like figures will perch atop the concrete walls and jump down or go on patrols or do whatever creepy children like to do in the dark. If they see or hear you, they’ll turn into spiders and you will die instantly. Well, not always instantly. Sometimes you can run away and the creepy spider-kids either give up, or get stuck, or go home to their spider-mommies. It’s hard to tell what actually happens because it is too damn dark. The stealth gets slightly better when you get access to a magical branch that ‘freezes’ the immediate area and stops these kids from turning into arachnoids. But even this branch cannot save the stealth, and although these moments seem to be relevant to the story, the game would be better without them.

Someday You’ll Return would also be better if it were shorter and less clunky in general. At fourteen-hours long there is quite a lot of padding. There are maze-like areas in the forest where the only things off the main path are collectibles and flowers. It’s easy to get turned around and start feeling nauseous—if only there was a potion to cure that. The last few levels are crammed with narrow bridges, that Daniel can only slowly walk across, and more bunker corridors with razor-wire or other nuisance obstructions. It even stalls things further by forcing Daniel to climb sheer walls by putting one hand over the other. Although this rock-climbing mechanic is not badly implemented, it gets overused like most of everything else. If the game had been trimmed and some weaker puzzles cut, it may have succeeded.

Technical issues are also present. The game runs poorly on high settings or above, with persistent stutters and regular framerate drops. Medium settings or lower leave quite a bit to be desired in the graphics department with less world detail and missing lighting effects. Although the forest generally looks okay, it lacks contrast—everything blends together. In addition, some of the story elements needed more polish; when you fall behind a character leading you to a location, the game’s dialogue carries on as if you were at the destination, despite being stranded in the middle of nowhere and having no idea where to go. 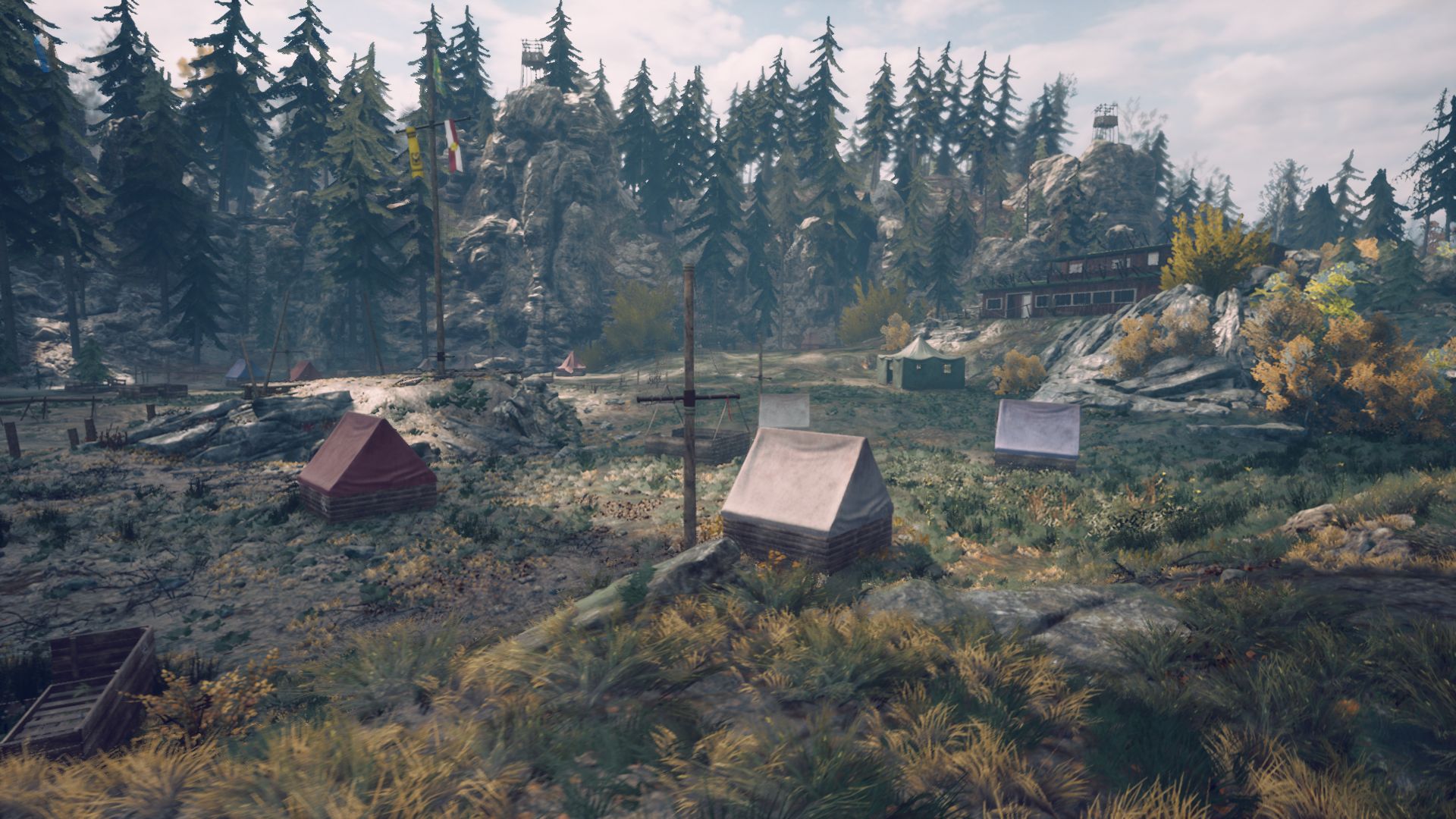 Someday You’ll Return demands too much from the player but fails to deliver anything of great value in return. It requires patience through bewildering puzzles, spatial awareness within the confusing forest, tolerance for some terrible stealth gameplay, and acceptance of a long and clunky adventure. It gives the player a decent potion-crafting system and a story that maintains interest. But neither are enough reason to spend fourteen hours trudging through the woods, especially not when the price is higher than other walking simulators that give just as much story while respecting the player’s time in the process.

Our ratings for Someday You'll Return on PC out of 100 (Ratings FAQ)
Presentation
65
he forest looks decent enough, although it blends together too often. The twisted worlds look cool, even though they are too dark and get overused. Voice work is inconsistent at best and poor for some exchanges.
Gameplay
55
A jumbled mix of potion crafting, tedious rock climbing, clumsy puzzle solving, and some awful stealth. Although the inventory system works great, not much else does.
Single Player
65
The story is the best part because it is interesting for the entire fourteen hours. It keeps dangling clues to drive the player forward. It’s a shame that it’s padded out over such a long journey and leaves questions unanswered.
Multiplayer
NR
N/A
Performance
(Show PC Specs)
CPU: AMD Ryzen 5 3600
GPU: XFX RX 480 GTR Black 8GB
RAM: 16GB DDR4
OS: Windows 10 Pro 64-bit

60
Consistently runs poorly on high settings or greater. Plus it has some technical failings with mission scripting, although no crashes or broken puzzles were observed.
Overall
58
There is an interesting story in Someday You’ll Return and a potion-crafting system that works suitably well, but players must endure an overlong adventure through a confusing forest with questionable puzzles, bad stealth, and too many clunky mechanics. 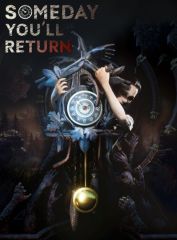