Chugs along but rarely takes off

Simulation games can be a mixed bag. They tend to offer a mix of addictive gameplay, elaborate micromanagement, and complex UI systems that demand some patience. DMM Games’ STATIONflow is more-or-less in line with these traits. The result is a romp that can be tough to get into but eventually takes hold, kicking into high gear as things begin to click. It really can be rewarding watching the cash roll in whilst examining the hundreds of basic polygonal figures buzzing through your active train station. Still - a few ambiguities, simple presentation, and occasional monotonous tasks hold STATIONflow back from real greatness. 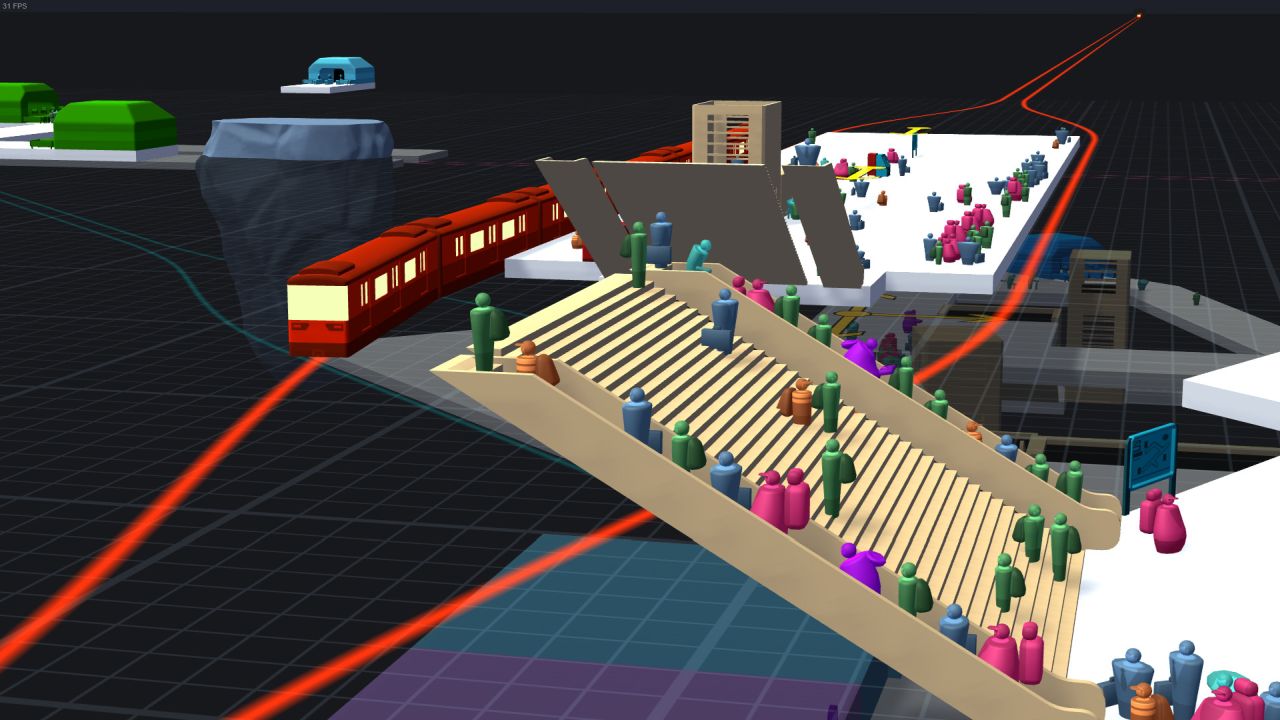 STATIONflow boils down to managing the operation of an increasingly bustling train/subway station. This mainly amounts to slapping down a series pathways, stairs, elevators, and signs to guide wandering workers and tourists to their destination. Basically, you’ll need to keep people happy, maintain a nice cash flow, and unlock new items/features. And so goes the typical sim quality of growth and progression cycles. These actions may sound simple, but after fumbling with webs of a few dozen corridors, 6 train stops, and 15 stairwells, things can get hectic rather quick. This can feel especially anxiety-inducing given the limited window of the ticking clock, and an end-of-day letter grade evaluation.

While the overall experience proves fun and addictive, there’s a feeling of repetition involved in some of the construction that quickly becomes apparent. This mainly stems from the abundance of laying down signs and filling in their details. People will be flowing through multiple pre-constructed entrances/exits during the day, reaching a fever pitch during rush hour. They must all be navigated to various trains - and often secondary spots like ticket booths, bathrooms, and vendors. This is achieved with a combination of convenient, accessible hallways and clear-cut signs.

The sign feature is worth highlighting, as it’s a major part of the game. These take the form of multidirectional arrows, which allow you to enter destinations that they point to. For instance, a corridor split leading to “A1” and “A3” exits should have an arrow at that split tagged with those codes. This is fine in the short-term, but after several days of increasing traffic, along with new train stops and corridors thrown into the mix, it feels like a convoluted mess at times. It can be quite tough to make heads or tails of it all. On top of this, it can be hard to gage the needs of the many travelers. At times, I could swear that my signs were as clear as possible, only to notice some were still confused as to where to go. Large, prominent red bubbles will crop up over the head of a displeased commuter with little indication as to their beef. 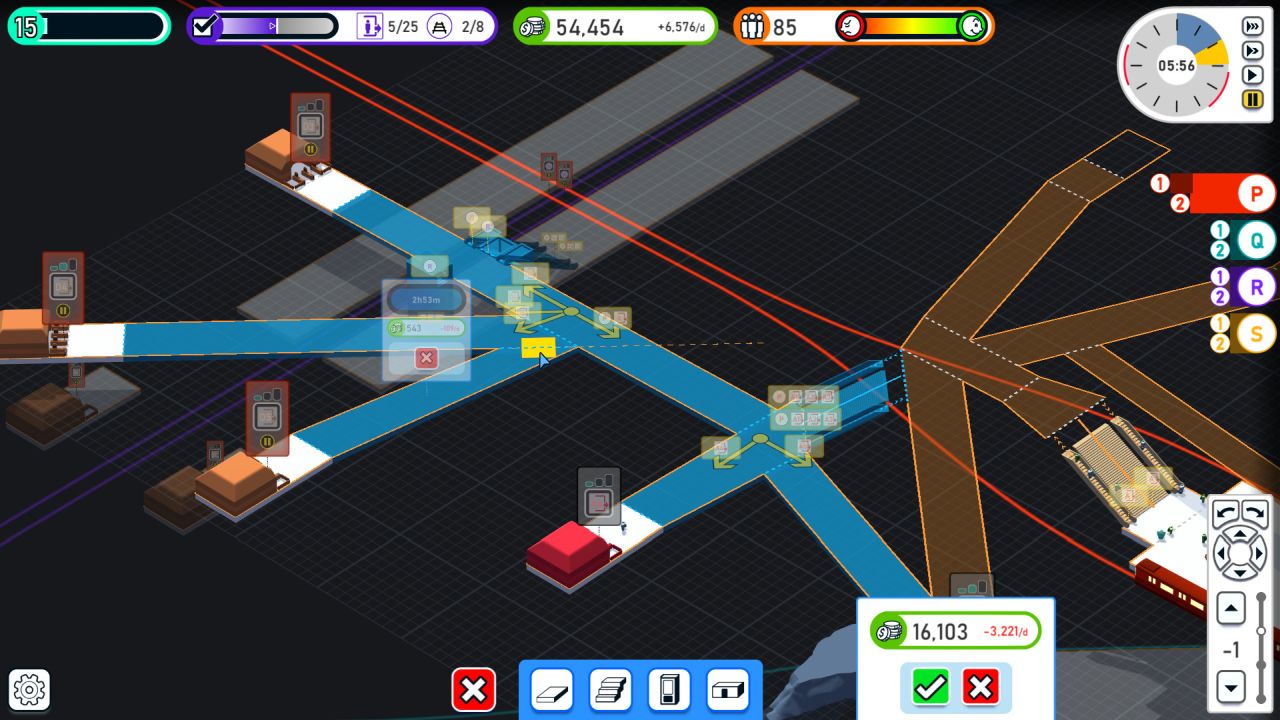 Adding to this is the occasional vagueness with some of the gameplay mechanics. STATIONflow never quite makes clear the ranges, frequency, and general logistics of the signs. If you’ve got a branching path and both ultimately lead to “C3,” is it appropriate to tag both paths “C3” or just the shorter route? Is it necessary that I tag a sign with a staircase marker, even if a stairwell resides right next to it? How specific and general can I be? What’s the general vicinity in which these people can make out signs? Questions like these often cropped up while managing my station, without much feedback aside from basic “satisfaction” and “evaluation” meters.

The game can devolve into feeling like a tedious chore, as you’re constantly bouncing from one sign to the next. “Oh wait, I need to add an arrow pointing this direction too.” “Oh shoot - I forgot to add a tag on this sign!” “Hang on, this sign needs to be marked with a ticket booth.” Et cetera. To its credit though, the ability to copy and paste tags from one sign to the next really helps streamline this painstaking process.

Adding to the ambiguities and restrictive gameplay is the somewhat basic path construction. You can flip through a series of paths varying in thickness, and manipulate their size and shape by dragging corners and edges. It’s a competent mechanic, though it can feel a bit stiff and clunky, reminiscent of a basic 3D modeling program. It’s fitting that the presentation itself is reminiscent of an early 2000s version of Maya software. Going back to edit, destroy, or reposition pathways also feels fairly restrictive and insufficiently explained. Adding a few additional floors to the mix only makes this more complicated, especially with the trickiness in throwing down elevators that connect floors. Still, it helps that you can at least flip through the perspective of each floor swiftly and easily. The intuitive interface and click / drag controls do aid in easing this process. 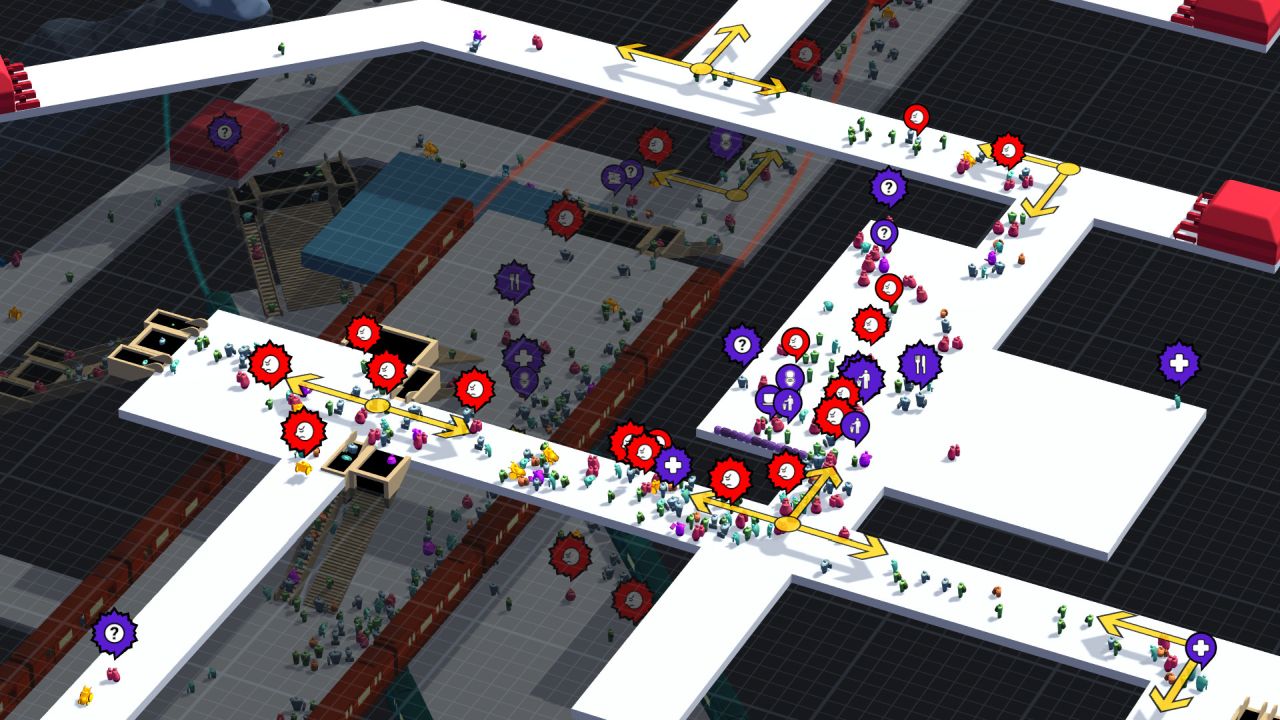 Once you’ve cobbled together a fairly functional station with navigation signs, the game starts to “flow” as it were, and its fun factor picks up steam. It was a joy watching people stream through my elaborate, well-oiled machine while earning a steady income. The game continues to grow more interesting as you rank up, as you’ll unlock new structures and an increase in traffic to liven up your station. Happy, unconfused travelers will net you more wealth - though you can also get cash quickly by taking out loans. It’s a nifty feature, though at least in the “normal mode” setting, I never had to resort to it. And yes, I did take some pride in operating a financially prudent, sustainable train station.

You’ll soon unlock structures such as ticket booths and vending machines, as well as buildings like bathrooms and cafes that you’ll want to sprinkle in high-traffic areas. This works to further appease your growing array of travelers. These can be fun to decorate your station with - though they also add to the painstaking process of tagging signs. Such unlocks manage to add to the enjoyment while also bringing new burdens in construction. For instance, you’ll eventually need to erect more elevators after unlocking wheelchair-bound customers. Integrating these new systems into your station can present fun new challenges, but also inflate the stress level.

Really, it’s when you’re at your best in STATIONflow that you’ll actually be struggling to find things to do, as the game largely “plays itself” once the infrastructure is in place. This is where the pacing can feel erratic; oscillating from overwhelming to tepid and boring at times. You may go through the majority of a day with virtually no hurdles or actions required. Another day, a confusing corridor might spur a mob of 500 angry commuters you’ll be scrambling to appease. Thankfully, a useful pause feature allows you to freeze the action and tinker with your station before the mob gets too hysterical. Or you can speed up the passage of time if things are going swimmingly. 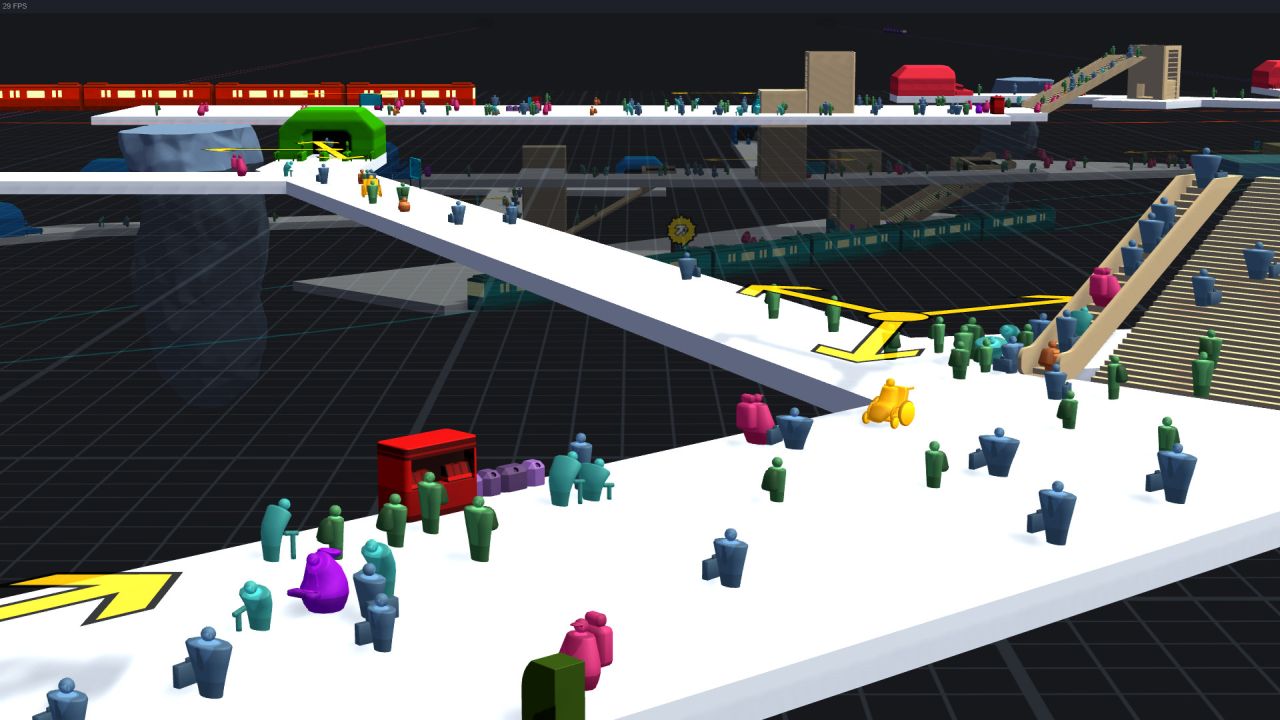 While STATIONflow can escalate into convoluted chaos at a moment’s notice, the game, to its credit, does a nice job of easing you into the action at first. A decent tutorial and simple objectives allow you to find your bearings. From there, you can choose from a number of pre-built scenarios that continue to expand as the game progresses. These vary in terms of layouts, ranging from more open-ended sandboxes to distinct missions that are more focused. Each of these missions also comes with customizable options that allow you to adjust the in-game economy and construction time of placed objects. This helps beef up the already solid replay value.

With that said, it’s a bit stripped back when compared to many others in the genre. You can really get the bulk of the experience and obtain all unlockables in the course of a dozen hours. This, coupled with a lifeless presentation, a lack of multiplayer, and a few convoluted elements makes it tough to recommend at nearly $20. Regardless, there are certainly enjoyable moments to be had. I would often find myself shooting for a half-hour session only to find 2 hours had flown by faster than a speeding train. Those who enjoy at least a competent simulation experience would do well to give STATIONflow a look.

Our ratings for STATIONflow on PC out of 100 (Ratings FAQ)
Presentation
55
STATIONflow has all the visual and stylistic flair of a decades-old technical drafting tool. This extends to its tepid melodies which are just sort of “there.” But it’s all sufficient enough in setting the foundation to a fairly engaging experience.
Gameplay
69
With elaborate mechanics and intuitive controls, the potential is there. Basic construction is somewhat versatile and simple, and the gameplay can be rewarding. Yet, it feels only partially realized at times with its ambiguities and lack of precision with certain actions and behaviors.
Single Player
69
A functional train station simulator. Open-ended gameplay and a diversity of customizable scenes add to the strong replay value. Occasional erratic pacing and a somewhat stripped-down campaign tarnish this a bit, though
Multiplayer
NR
None
Performance
65
Things tended to flow smoothly until the later portions of the campaign. A 4-floor station and flurry of nearly 2,000 commuters brought some brutal slowdown, especially when cranking up the speed.
Overall
67
Even if STATIONflow is about as dull as can be visually, and feels a bit rough around the edges mechanically, the rewarding gameplay often shone through, engaging me for hours on end.