The Suicide of Rachel Foster Review

Spacious accommodation but an underwhelming itinerary

Eventually we might need to face our past. Unpleasant memories can start to fester in the back of our minds. Exploring them can either reopen old wounds or let us look at them from a new perspective. Walking simulators have proven quite adept when it comes to revisiting the past. After all, they consist of rummaging around a world that has been molded by its occupants. The Suicide of Rachel Foster is one such game, a cross between Gone Home and Firewatch. It has the player exploring an abandoned hotel while a character talks to you via the phone. Its setting is appropriate and nicely sized, but the environment needed more detail and the game fails to capitalize on some of its best qualities. 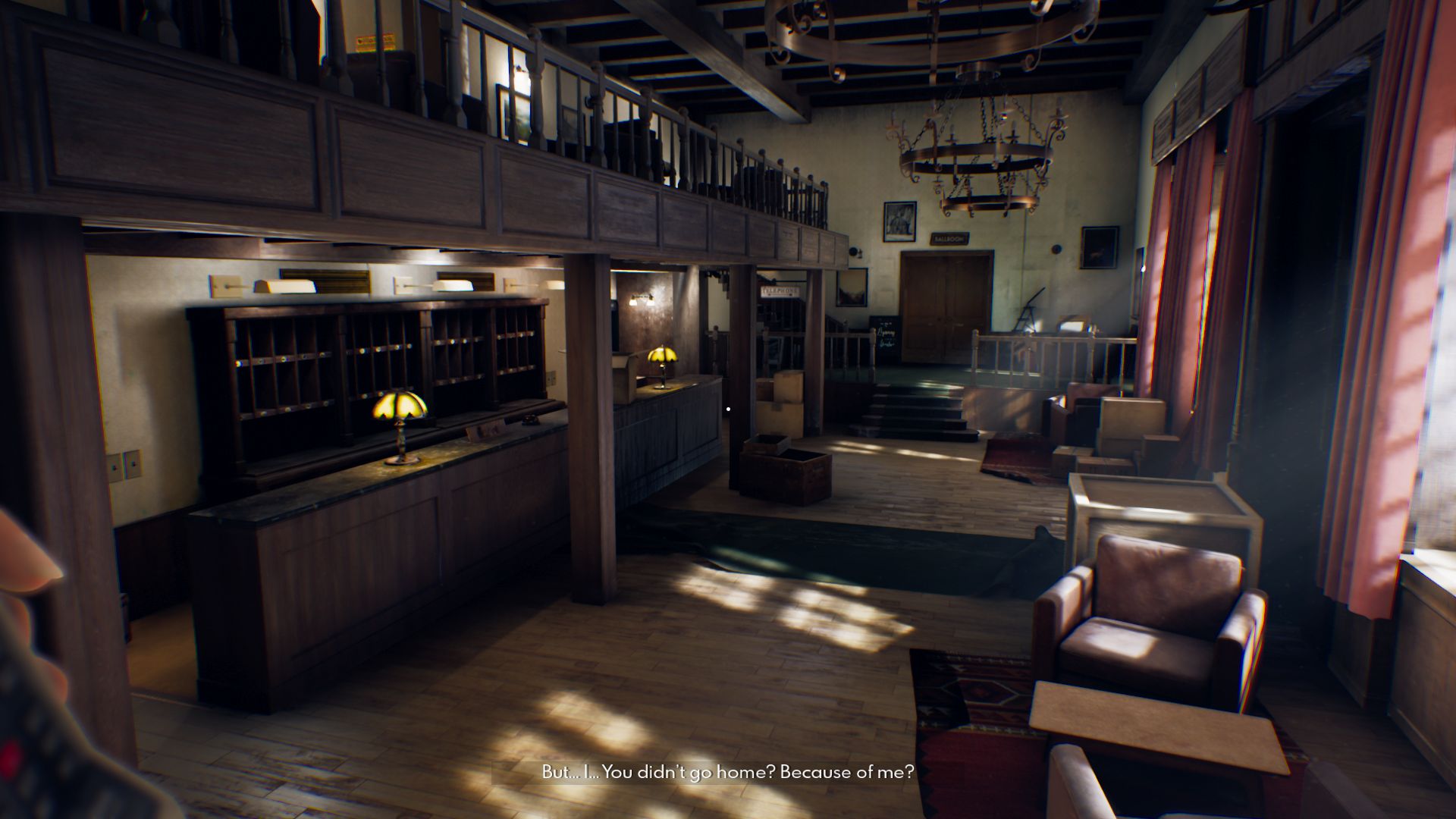 You play as Nicole, daughter of the recently deceased owner of the Timberline hotel. The hotel is up for sale and Nicole must do a final sweep before it changes hands. Set in 1993, Nicole drives there to meet a lawyer. All the proceeds are going to Rachel Foster’s family because ten years ago, when Rachel was just sixteen, she had an affair with Nicole’s father and then killed herself. This broke Nicole’s family apart and she has not been back since. The hotel has been unused for years, so your only companions on this adventure are creaking floorboards and moldy food. To make matters worse, a snowstorm has just blown in and the lawyer is delayed. So, you’re stuck inside the hotel, alone.

The Timberline Mountain hotel is of good size and complexity. It consists of four levels: a basement, main floor, and two levels for the guest rooms. Since the hotel is old, the retro patterned carpet and questionable interior decorating screams late 70s and early 80s. It has a style quite similar to The Shining and the game even starts with a lone car driving up a winding road. In the hotel, you will be going back and forth, and there are multiple pathways to choose. The early hours, when Nicole needs food or heat, are rife with detours into side rooms and untraveled hallways. As the game takes place over several days, similar in structure to Firewatch, you will see every inch of the hotel. A handy map and regular signposts will prevent you from getting lost, although not for lack of trying.

While the hotel is appealing to explore, there is a lack of interesting items outside the important areas. There is nowhere near the density of something like Gone Home. Letters on the manager’s desk reveal how the hotel had been losing money. Nicole’s own room remains untouched and tells of her ice hockey success and interest in astronomy. A tiny museum has climbing equipment and a small diorama of the immediate area (forested and remote). And yet most of the guest rooms cannot be accessed. Generic magazines, books, radios, and cups can be looked at closely but are just background noise. The dining room and ballroom don’t have much to say aside from a food menu and a photo of the hotel when it was thriving. After some time, the world has no more story to tell. 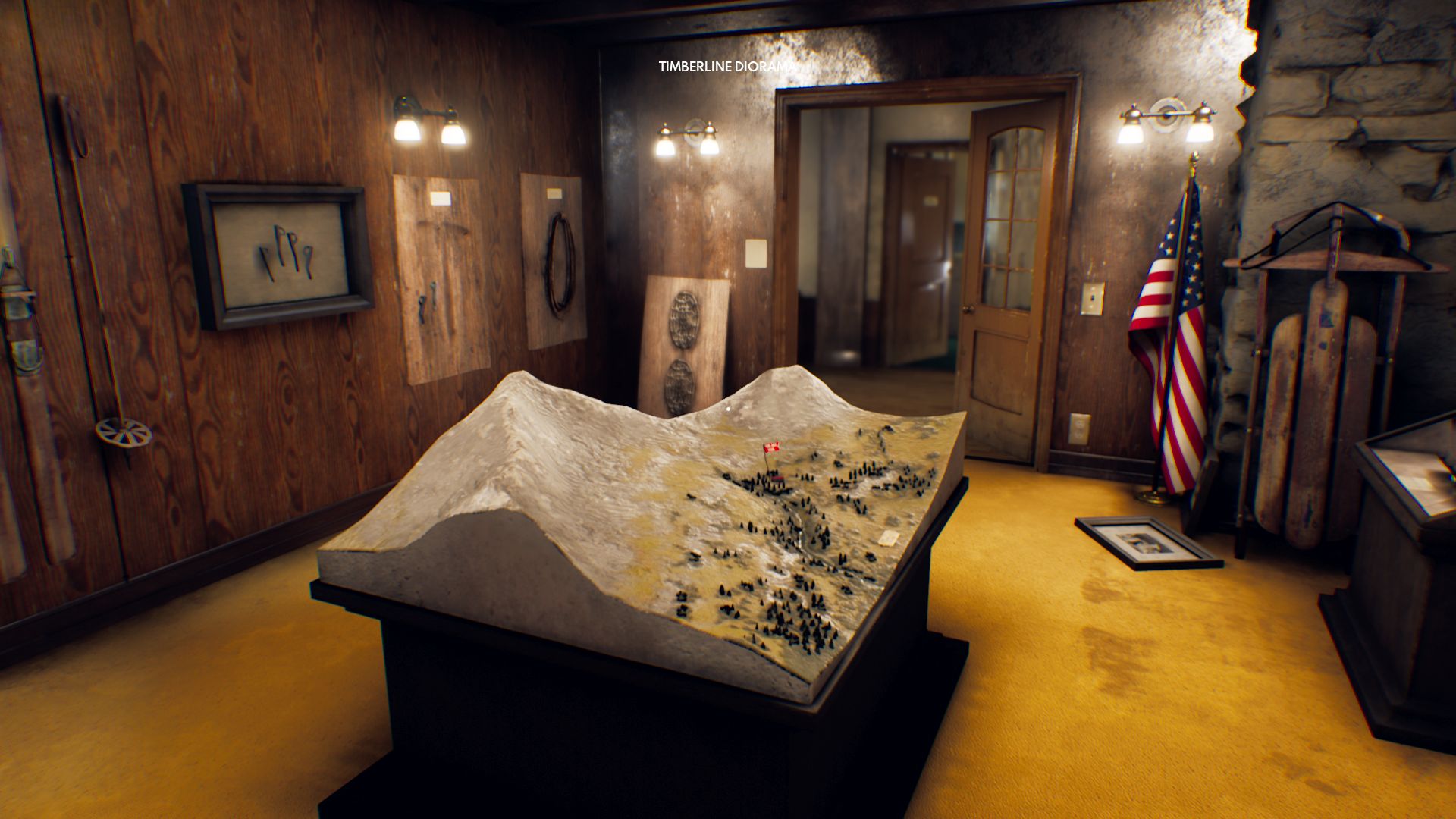 Most of the story actually comes through conversations with a young male FEMA agent named Irving. When the snowstorm first hits, Irving calls you via the phone to warn you that going outside would turn you into a human popsicle. At first, Irving’s tone and diction is annoying, but he is familiar with the hotel and helps to locate some items. Irving is really a springboard for Nicole’s thoughts. You can even select a few dialogue options, although the chemistry between the two is lacking. Nicole talks about when she was younger and recalls many happy memories through the hotel’s hardwood halls. Some memories are not so pleasant, and those are the ones that matter.

Strange things start to happen: lights turn off, doors close, footsteps echo from nearby, and scratching can be heard in the walls. Unexplained objects are found inside rooms, like fresh lipstick. An old phone rings and an unknown person delivers a cryptic message about Rachel being nearby. When Nicole starts to fit the pieces together, she believes there is more to Rachel’s suicide and begins to investigate. The game takes on a different tone but it stops well short of becoming a horror game. Nicole stubbornly seeks the truth and this defiance, in the face of the paranormal, is refreshing but also lessens the atmosphere.

As a walking simulator, there is not a lot Nicole needs to do. No puzzles to solve. Not many items to collect or read either. Mostly she goes to a corner of the hotel to open a door or press a button (to turn the lights back on) and then the game leaps to the next day. The most complex task involves remembering where a screwdriver was and going back to grab it, since it can only be collected when the story asks for one, and then using it to open a door. 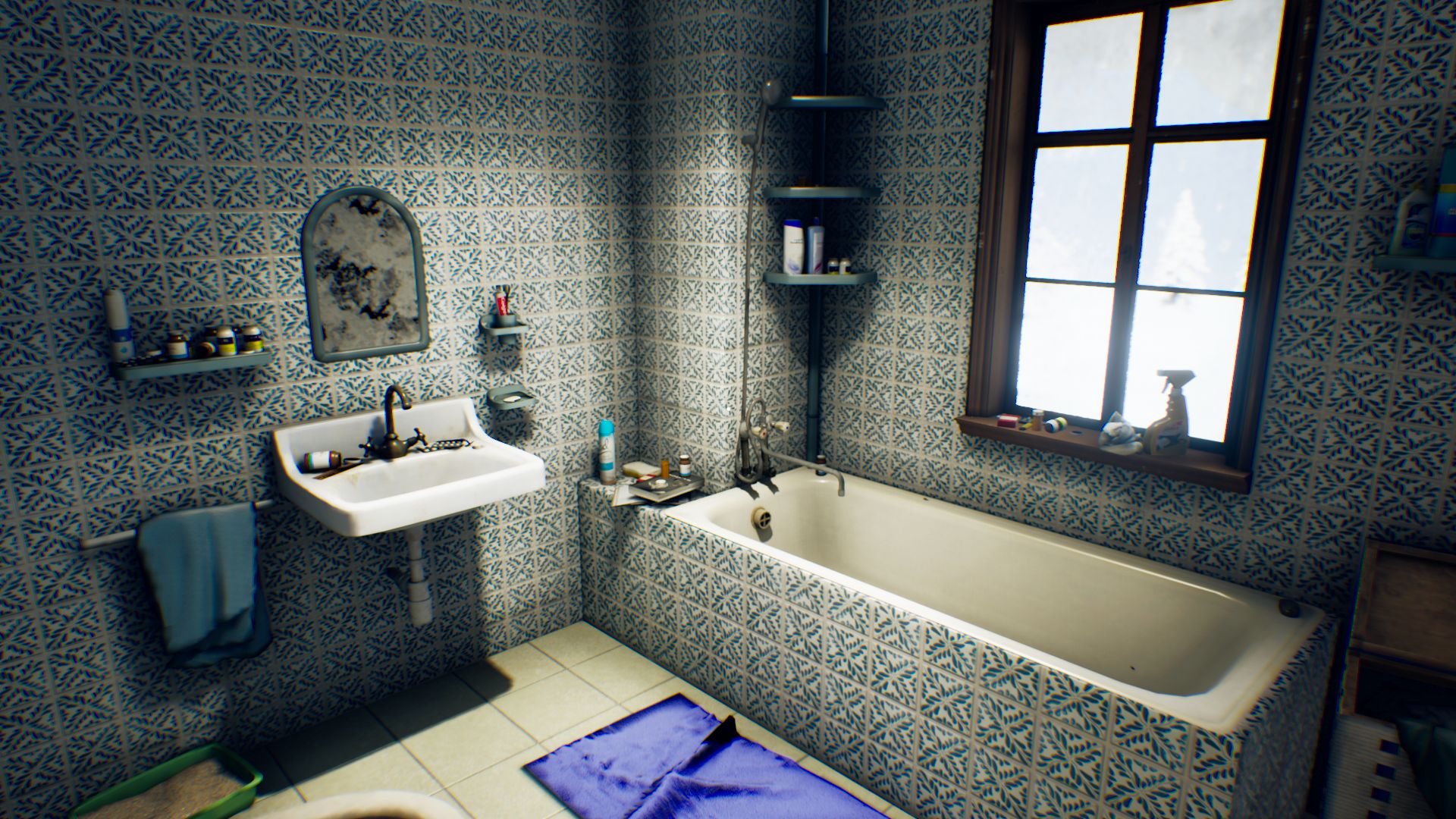 But there are three tools that Nicole can pull out of her inventory once each is found. The first is a Polaroid camera with a flash. Its light is used to paint a fading picture of the world in increments. This excellent horror tool is superseded not five minutes later by a dynamo torch that must be constantly turned on to keep the light shining. Dark corners are adequately lit by the torch, although it is rarely required outside the crawl spaces.

The final tool is a parabolic microphone that amplifies sounds. The only thing it seems to amplify are bells; not horrifying alarm bells that Edgar Allan Poe foretold, but gentle tinkling bells you might hear on a child’s bicycle. These bells lead you to the next destination, although they are harder to follow than you might think because they are not muffled through walls and floors. Some bells seemed to lead nowhere, making navigation a chore. It was hard to tell if the microphone was broken or just ringing up another missed opportunity in a hotel that initially held much promise. 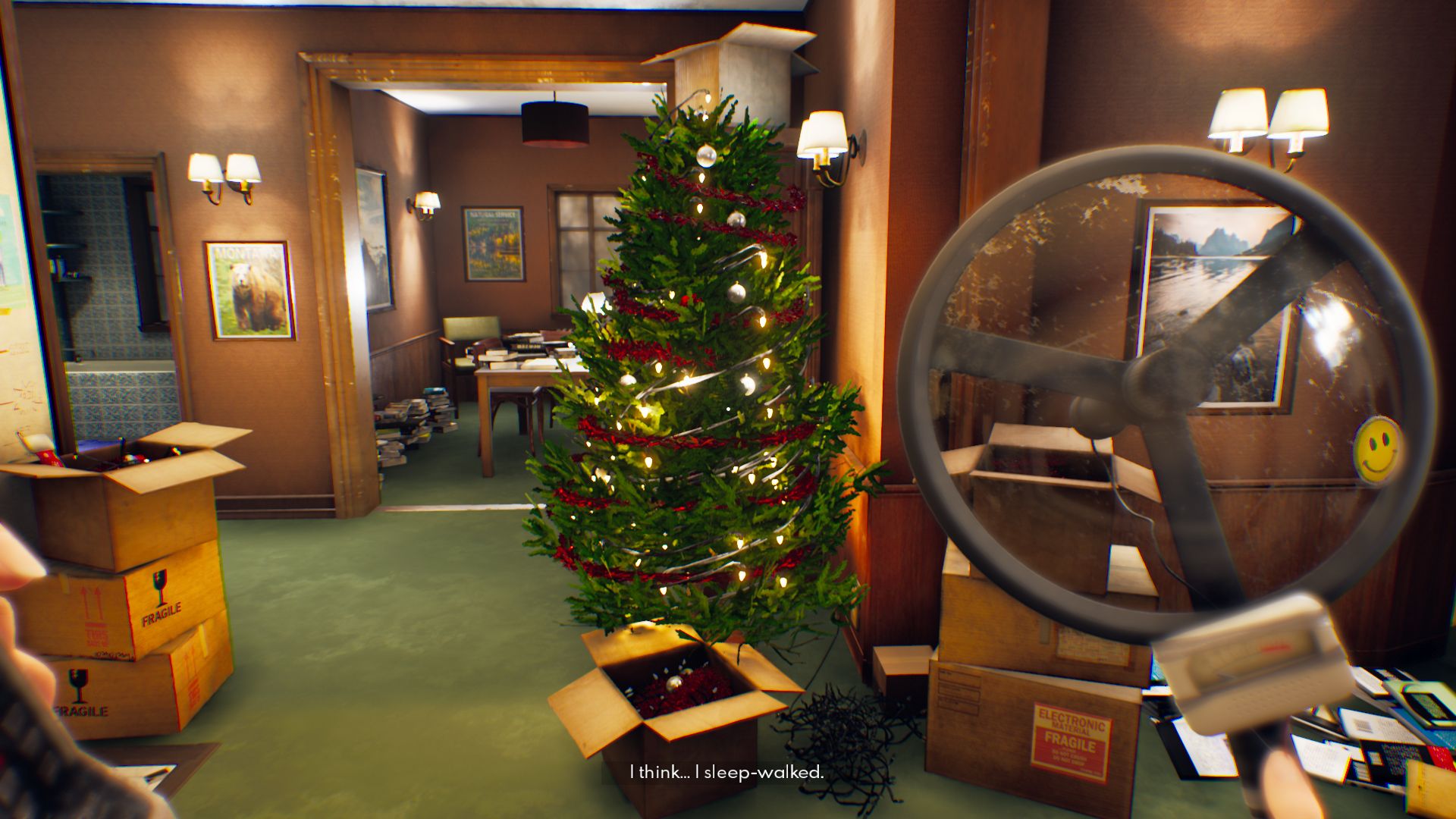 The Suicide of Rachel Foster has a narrow focus but still ends up being a decent walking simulator. The Timberline hotel is a good size and initially fascinating to explore. It has multiple routes and some interesting hidden corners. While the environment is detailed, there is not quite enough density to keep it exciting for the entire 3-4 hours. Most of the story is told via chats with Irving on the phone, and he helps uncover secrets about a teenager that killed herself years ago. The tone shifts towards horror, but it is not scary. If the game wasn’t so afraid to terrify its audience, it could have used its few tools even better and dived deeper into the gloomy story it sets in motion. If you like the idea of Gone Home mixed with Firewatch, including some of the issues from both titles, then The Suicide of Rachel Foster has plenty of empty guest rooms.

Our ratings for The Suicide of Rachel Foster on PC out of 100 (Ratings FAQ)
Presentation
80
The hotel setting is well designed and has a retro feel. Voice work is adequate from the two main characters although the FEMA agent is initially annoying and Nicole is stubborn.
Gameplay
50
Not much gameplay aside from following basic directions, pressing a few switches and using three basic tools, two of which are ineffective.
Single Player
70
The story starts well and keeps the player hunting for answers. Some back and forth between the two main characters helps it all flow neatly across the three to four hours.
Multiplayer
NR
None
Performance
(Show PC Specs)
CPU: AMD Ryzen 5 3600
GPU: XFX RX 480 GTR Black 8GB
RAM: 16GB DDR4
OS: Windows 10 Pro 64-bit

70
Performance is adequate but the framerate was not good in some places.
Overall
70
Uncovering the past has its ups and downs in The Suicide of Rachel Foster. While not a horror game, it only needed a slight nudge to become one and it would have been better for it. At least its roomy hotel setting is nice to explore, even if the world needed more detail and excitement.

The Suicide of Rachel Foster 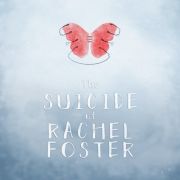