Stumbles too many times to truly stand out

The Switch is a veritable breeding ground for roguelikes. One need only glance at the E-shop to see the endless horde of equally endless procedural generation. Last Encounter, originally released on PC in 2018, has joined the ranks of its saturated brothers, but aims to deliver an experience that doesn't necessarily conform to the traditional formula laid out by its contemporaries. A mix of expository dialogue, twin-stick shooter action, roguish progression and an array of modular armaments certainly makes it stand out, but execution of those principles is what will keep people playing. 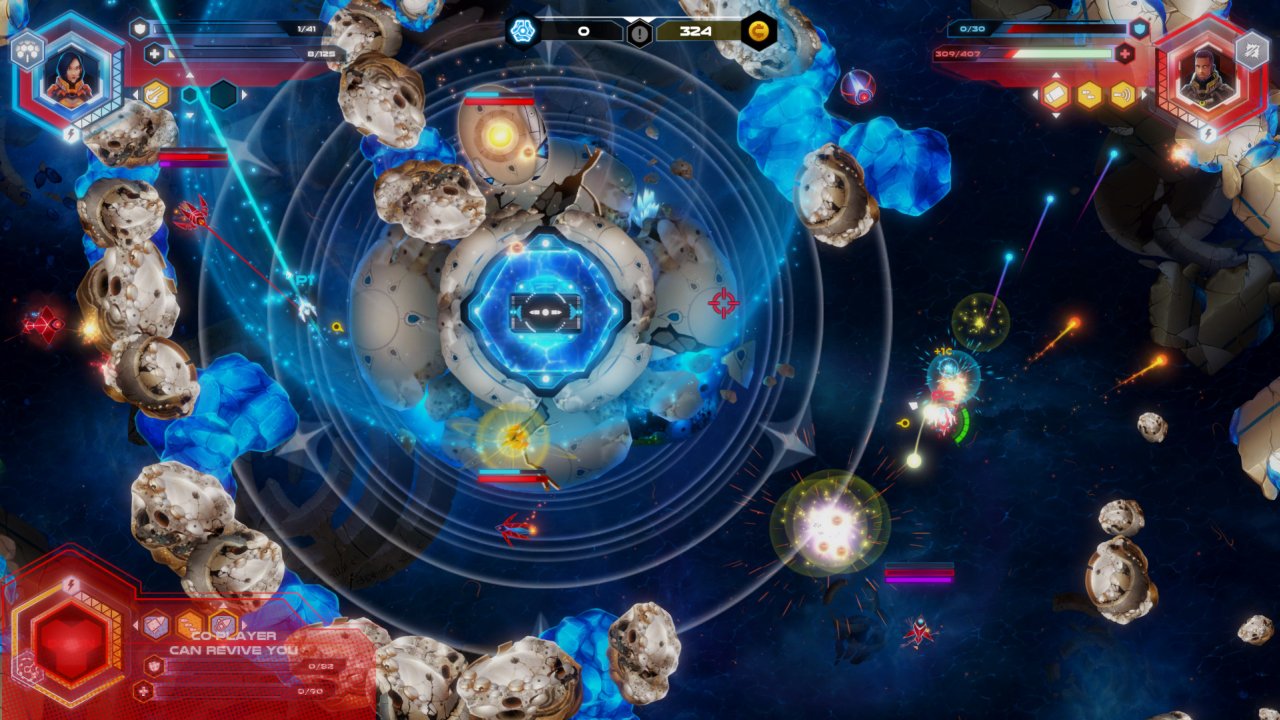 The world of Last Encounter is certainly a grim one. Humanity was teetering on the edge of eternal life through the use of advanced cloning technology. The mortal coil that drove men to ever greater feats of ingenuity was about to be shaken, and a new era was about to begin. However, before such revolutionary ideas could come to fruition, a tear in space-time brought unfathomable destruction in the form of a diabolical alien race - The Life Enders. Humanity was eradicated in mere days, with only one small research station left to carry on our millennia-long legacy. It is down to Dr. Connor and Subject 12A to find a way to preserve humanity and destroy the alien menace.

Dire circumstances and bleak settings are often an effective way of getting a player invested, with Last Encounter bursting out of the gates hammering that dour vibe into you with a significant amount of force. It is a genuinely interesting introduction, only slightly marred by the uninspired naming of the foreign invaders. The game tries to maintain that harrowing atmosphere throughout the play experience by scattering all manner of destroyed ships and expository data-logs. Unfortunately it all comes crashing down, ultimately becoming nonsensical, skippable background noise. This is mostly due to the banter being spewed out of Dr. Connor's mouth. Which is often verging on comedic, or at least an attempt at it. These juxtaposed messages can work, in a dark humour sort of way, however Last Encounter is not one of those games.

One aspect of the story does make sense in terms of gameplay is Cloning, which just so happens to be the focus of the whole game. Subject 12A is sent into deep space, and is expected to die. Repeatedly. This is of no consequence as you're essentially an immortal blueprint that can be reborn in any number of ways. These “blueprints” come in the form of pilots you can play as. When you begin, you have access to four galactic aviators/aviatrices, each sporting a unique set of passives. These could be movement buffs, shot speed increases, or even damage reduction. Whilst on their own, these little nudges in stats help mould your build towards your eventual end goal.

Once you have picked your avatar, you get to select a ship. Again, these come with a number of easy to interpret stats, giving you a rough idea of what that ship is all about. What's more, each ship comes with a unique active ability, such as a cloaking device or EMP, and a basic weapon. Each of your starter weapons pack relatively little punch, but excel in different aspects of combat. Shells deal more damage, providing you are up close, whilst your typical pea-shooter unleashes a consistent stream of bullets. You can swap your loadout anytime at your homebase, encouraging experimentation to find the combination that clicks. 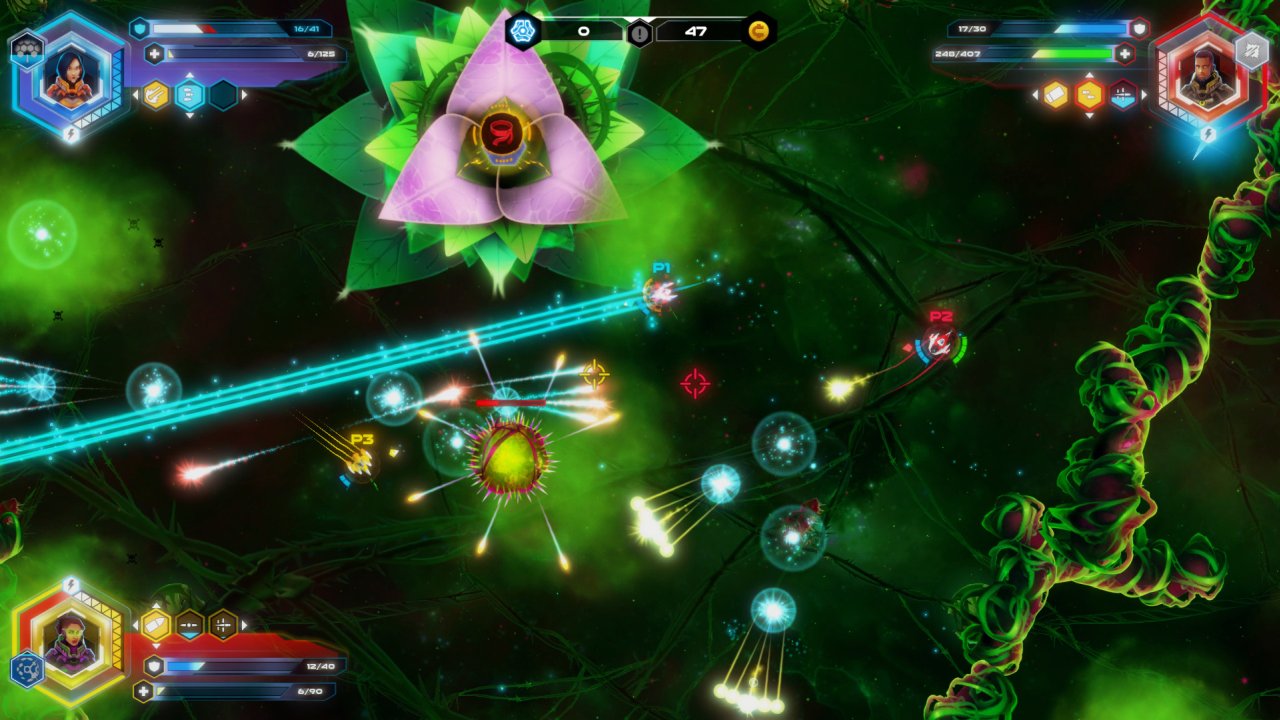 After you complete a very brief tutorial, you are unleashed upon the galaxy. Last Encounter's gameplay is focused exclusively around the combat, as is to be expected. You fling your ships across various “sectors”, or rooms, engaging a variety of enemy vessels. This is a Twin-Stick shooter, so nimbly navigating the playspace, avoiding bullets and stage hazards whilst firing at your numerous foes is where the fun lies. Everything feels fine tuned, easy to control and forgiving enough that you don't feel like you are taking unnecessary damage, or your bullets are straying too far from your target.

Gameplay depth is achieved through the inclusion of active abilities and “dash”. Active abilities are powerful, with each one massively altering the playscape. Stealthily scouting the arena, looking for the ideal opening to attack, or setting up an impervious shield and sieging a fortified area or even diving headfirst into the enemy, overloading your shield and causing a catastrophic explosion. The dash grants you a very brief burst of speed that makes you impervious to most enemy attacks. It has a small cooldown, preventing abuse, but is still short enough to be able use liberally. All of these little systems combined help establish an incredibly solid foundation, and rewards a multiple strategies when tackling its challenges.

Arguably, Last Encounter’s biggest draw is its modular weapon system. Weapons are made up of three distinct parts: the base weapon, the modifier and a passive effect. Combining different components together yields incredibly diverse, and potentially powerful, results. It is not beyond the realm of possibility to have a rapid-firing, poison rocket launcher, or a triple-barreled, wall bouncing laser. It is an incredibly gratifying system to mess around with, that is hampered by a seriously potent grind.

Acquiring these components and weapons is completely random, with sectors dispensing them either like candy or not at all. The components you get are also unnecessarily random too, often providing you with multiple of the same component. There is very little use for hoarding three lasers, but the game will continue to give you them regardless. This is made even worse when you consider components have durability. Every time you use them, they degrade and eventually break. This means you are disincentivised to use newly discovered weapons, as you might need them at a later date. This inevitably results in your death, and your fancy gadgets being lost to the ether.

To offset the frustration of losing all your gear, there is the research system. This allows you to invest credits, found by destroying things, into any component you find. Invest enough, and you will unlock a variant of that component that does not degrade. This system is not without its flaws, and once again, it comes down to grinding. Currency in Last Encounter is easily obtainable in small amounts, however death has the penalty of slashing your collected credits quite significantly. This often results in not having enough to really do anything, especially early on. You are also able to purchase components and weapons pre-run, which is a nice touch, but again, this costs an extraordinary number of credits, making the whole thing untouchable until you gain a significant amount of competence. 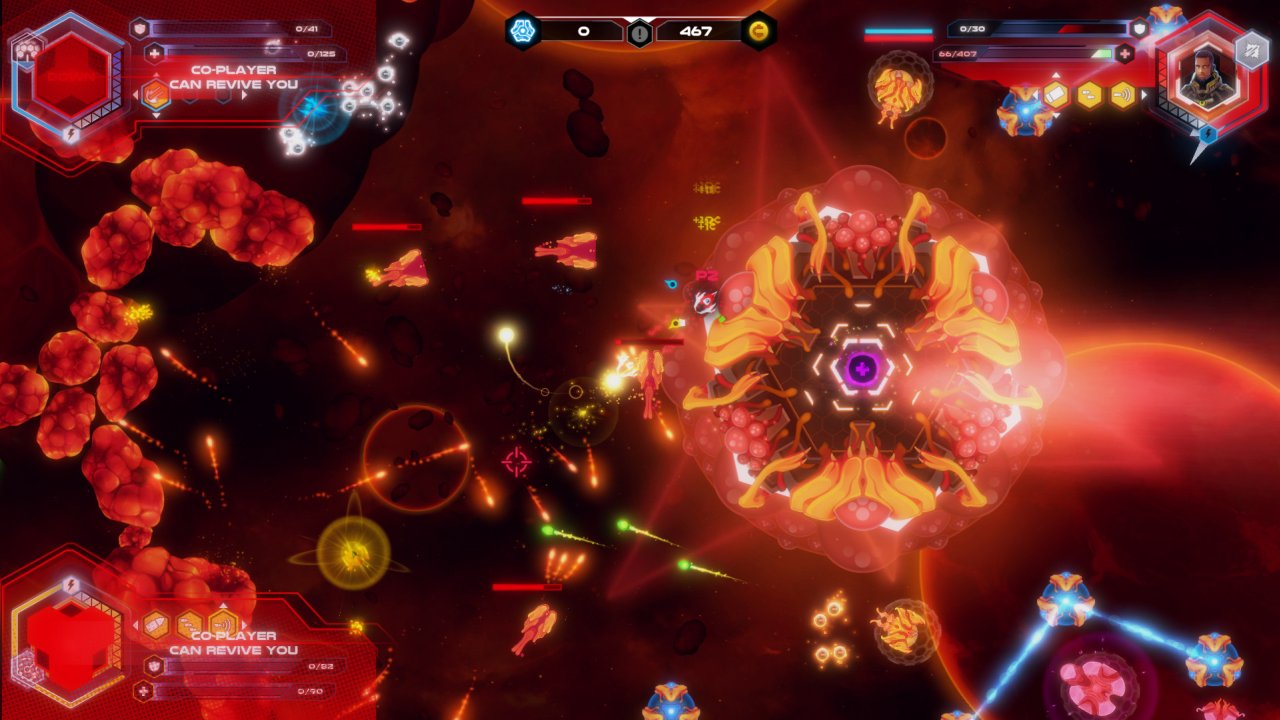 Which is really where everything comes together in a mishmash of poor design decisions, that tarnish a genuinely fun game. The game is brutally difficult. Your health pool is pitifully small, enemies deal ludicrous amounts of damage, your own damage is low and most engagements result in your running away from enemies and dealing chip damage in a desperate attempt to make some sort of progress. Early on, this is acceptable. Battles are prolonged, sure, but not overly so. As you unlock and explore new galaxies however, things ramp up quite drastically. The game begins to feel like you are swimming against the current, with very little to motivate you to go continue. The intrigue and wonder it promises literally fades away the more you are exposed to the monotonous grind the game puts before you.

Last Encounter desperately tries to pull you back in by introducing new enemies and stage variants, like healer ships, sentient vine monsters and even bosses. These are all nice additions, albeit mostly hidden away behind its fortified wall of progression and difficulty. Bosses are possibly the most unfortunate casualty of this, as they are giant, multi-phased affairs that force you engage multiple threats from every conceivable direction, all the while gunning down some intergalactic monstrosity. It is thrilling, challenging and a test of everything you have learned up until that point - providing you have the patience to reach such a point.

The final gimmick you can interact with is the four-player co-op multiplayer. On paper, this is a brilliant addition that could alleviate all of the issues this single player experience is bogged down with. Each player selects his/her own pilot and ship and you go on a galaxy hopping adventure. All the potential depth is intact, but you can kill enemies 2-4x faster. It all sounds great until that woefully disappointing grind rears its ugly head yet again. Should one of your comrades die, you take a hit to your bank account. You can revive your team quite quickly, but the more you die, the less you earn. When you inevitably game over, you are often left with no money and have made zero progress. Something that should theoretically make the game more approachable, actually makes parts of the game significantly worse.

In terms of graphics, Last Encounter looks pretty nice. It has an appealing art style that doesn't overwhelm the senses, allowing you to observe the battlefield without distraction. Special effects are satisfying, especially the explosions, and the enemy design is varied enough, allowing you to pinpoint key targets. Each galaxy has a theme, which helps staunch the monotony slightly as you are not just battling on a mostly black backdrop. Unfortunately, the game does suffer from fairly significant frame drops, especially during boss fights, which is a cardinal sin for a Twin-Stick shooter. You can alter the graphical fidelity in the options menu, however upon testing this feature, the game chugged in the same locations. 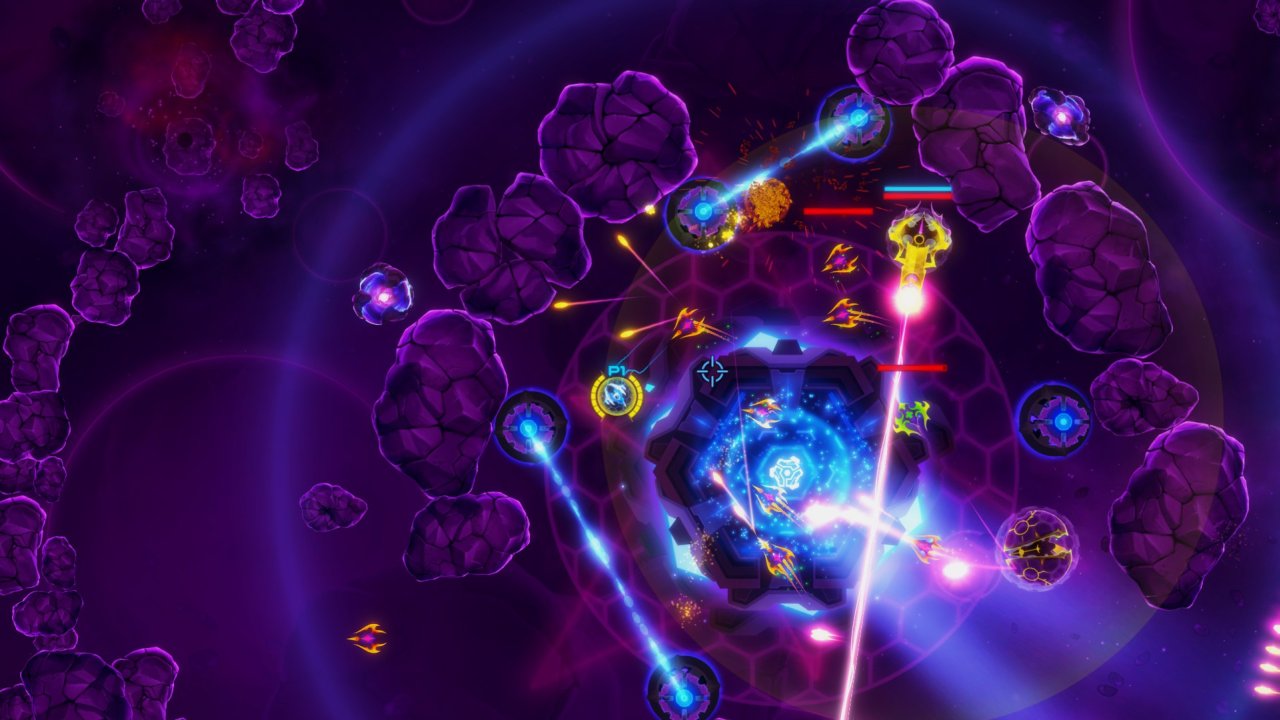 One of the most immersive and evocative features a game can include is a suitable soundtrack, and Last Encounter misses the mark quite spectacularly. For large chunks of time, a game about shooting aliens in space with ludicrous weaponry, has a foreboding musical score. What the game needs is something epic, or better yet, thumping and heavy. It needed to have something to invigorate the combat, get you invested in the game. Bizarrely, the game does sport that type of music, but it only plays during larger engagements, and is incredibly brief.

Last Encounter is a game chock full of good ideas, blocked at every turn by almost insurmountable barriers. What little enjoyment that can be had, is violently snuffed out by senseless grinding. Throw in performance issues and you have a title that is simply brimming with missed potential. Roguelikes are a dime a dozen, and Last Encounter stumbles too many times to truly stand out. Humanity well and truly went out with a whimper.

Our ratings for Last Encounter on Switch out of 100 (Ratings FAQ)
Presentation
60
A pleasing art style that doesn’t get in the way of the action.
Gameplay
40
Tight, responsive Twin-Stick action that gets old, a bit too fast, due to poor progression.
Single Player
40
A tedious grind that actively gets between the player, and fun.
Multiplayer
20
An almost game saving inclusion, made irrelevant due to poor design.
Performance
50
The game runs well for the most part, but has some serious framerate issues at key moments.
Overall
40
Almost every good piece of design in Last Encounter is knocked down multiple pegs thanks to an oppressive grind. It successfully manages to invest you in the world and its systems, before quickly erecting barriers that direct away from the interesting features. Had the game been a bit more generous with its upgrades, or toned down the monotony, this could have been a solid roguelike. 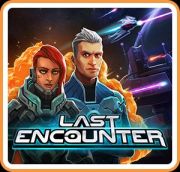