Being massacred by barbarians has never looked cuter

When you first boot up Bad North, you might imagine many-a-jaded gamers developing immediate buyers' remorse. The Unity engine title screen, followed by the game's very bare menu interface, might evoke Vietnam-style flashbacks of those Unity train wrecks you can still find on the Steam store page. What you have in Bad North, however, is a beautiful puzzle-strategy game that makes a competent use of an unfairly besmirched engine. 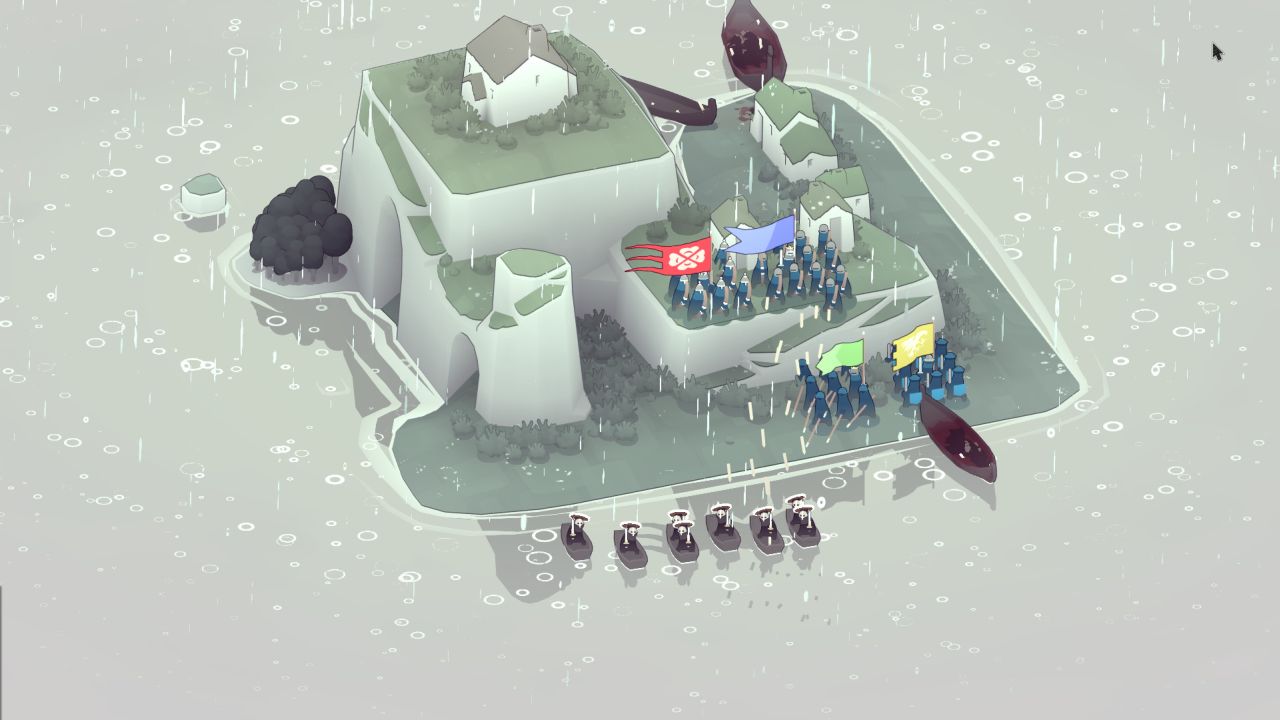 Set in a fictional medieval universe during a Viking age of conquest, you are tasked with defending the remnants of your father's falling island-based kingdom against a seemingly unstoppable onslaught of waterborne barbarians. Yours is a fighting retreat. Always on the defensive, you and your generals (each commanding a unit) are hopping from island to island defending your subjects and their homes against the raiding parties sent forward by the main invasion force. With each successful defense, you will gain precious coins that will allow you to upgrade your desperate survivors into hardened warriors. As your journey progresses you'll have the chance to recruit new generals and acquire powerful items (conferring very impactful boons and abilities to your troops) until you inevitably reach your final stand on the last island on the game map.

Those who played FTL (the 2012 space strategy game) will feel immediately at home with the Bad North campaign. The map, drawn in a style reminiscent of those stained glass church windows, is made up of a randomly generated network of islands each connected by a series of paths.

Although the game presents us with a beautiful map to look at, the campaign suffers of a lack of narrative flare. If we take FTL, each star system - the equivalent of Bad North's islands - presented the player with a tidbit of information through its text-based events. This enriches our overall narrative experience, giving us the impression of undertaking an epic adventure in a fully fledged universe. Bad North instead presents us with an interesting scenario, accompanies it with interesting stylized visuals, but then leaves us a bit hanging story wise; most of its story discoverable only through the Steam store page description.

Always behind your army is a dark line that represents an unstoppable wave of Viking invaders. Each turn it engulfs islands on the map. If the island you are standing on is caught by it, it's game over. Unlike FTL, which gave you a chance to flee the orbit of the rebel navy through last ditch fights, the horde is a lose condition. Though it might seem frustrating to perish immediately because of it, I must admit I had no trouble keeping away, at least on Normal difficulty. There are also a series of checkpoint islands scattered through the campaign map. These will result in a challenging fight but through them you'll have the chance to rewind your game. Screw up your itinerary and got caught by the Viking onslaught? You can go back to checkpoint island at the expense of any meaningful progress you made in the meantime. 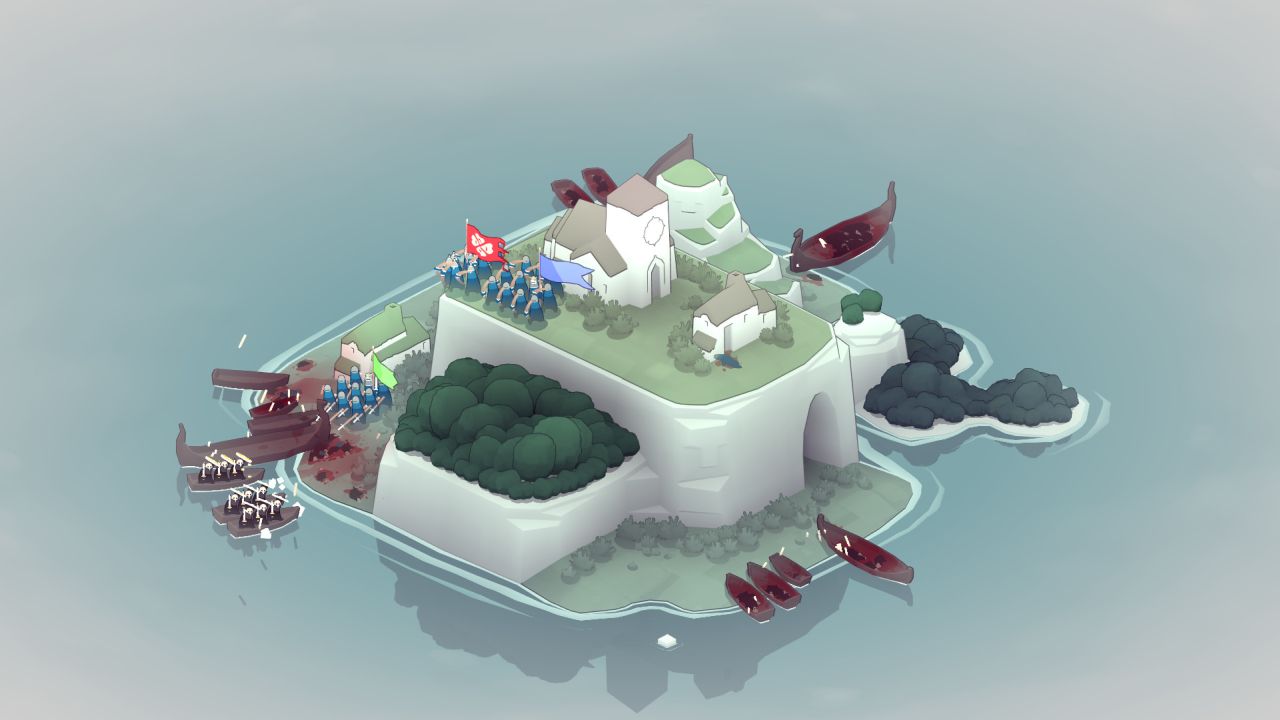 Each island hop represents a defense, and each defense will win you gold and make your deployed units fatigued. Once all of your available units are fatigued, you are forced to pass your turn. On the map you'll also notice various island underscored by question marks or banners. Each banner will recruit a new unit to your entourage (often possessing a trait); each question mark represents a new equippable item. Prioritizing the defense of these islands is fundamental for a successful run.

The horde, gold/fatigue, and new items/generals are both the fundamentals and extent of macro-gameplay of Bad North. There is no great complexity to it. Ultimately, the most efficient strategy is taking a route that keeps you ahead of the Viking wave while also maximizing the number of generals and items you may win. As your general entourage increases, you can undertake multiple jumps per turn - granting you greater resources to upgrade your units. From there you try to maximize your gold income to ensure that your troops are the highest possible level by the final island.

This relative simplicity is not in itself problematic. If you want strategic or organizational complexity, there's your Hearts of Iron or your Factorio's. Bad North, in its whole, works. Though it encourages you to follow a fairly obvious strategy, it keeps you hard at work at the tactical level through its battles. It also prevents you from snow-balling at a macro-level (i.e. your units becoming too upgraded for the challenge being presented) by introducing efficiently greater quantities and deadlier types of enemies.

The battles is where the game truly shines. Each successful fight leaves you with the very rewarding impression of leading a small but elite army in a battle against all odds in which you prevail versus an overwhelming enemy. There is also something tormentingly scenic when, in defeat, you are forced to flee using the enemy's beached boats while they burn your subjects' houses to the ground. 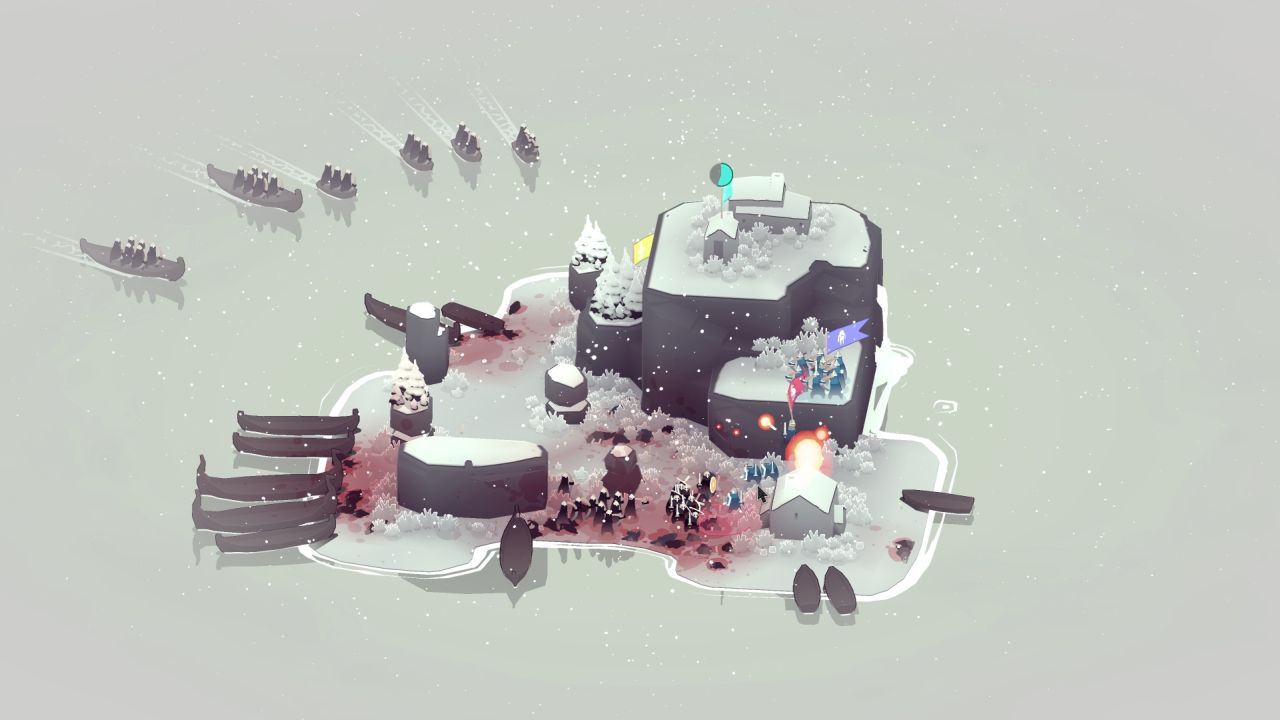 Each island offers a real-time defense scenario on a randomly generated map. These are made up of a series of 'tiles'. Some will have a fair share of impassable terrain, some will have hilly tiles and all will contain a differing number of homes. You have two directives: protect as many houses as possible and survive the attack. With a maximum of 4 units per island, you will have to respond to various waves of enemies disembarking on all possible sides of the island. Very often you will run to one side, only to then have your soldiers quickly reposition to the opposite side for another simultaneous landing.

The fighting, echoing the Total War games, revolves around a sort of rock-paper-scissors mentality in which positioning can make or break your army. That is, each of your 3 types of units - i.e. archer, pike, swordsmen - can counter (and can be countered in turn) by a specific type of enemy. At the same time however these relative strengths or weaknesses can be overridden by good maneuvering. For example, pikemen will generally slaughter all melee enemy types from afar but will collapse to missile units' fire. Nonetheless, if they get in close to enemy archers, or sword infantry manages to get in close, they will massacre (or be massacred respectively) .

While all the combat is automated, each unit also has a powerful active ability in its inventory that essentially dumps the entire counter system and adds an interesting micro-management dimension to the fight. Scared that your archer units cannot get through shielded enemies? The barrage ability will make short work of them. Enemy swords are getting too close to your pikes, or pesky archers are peppering you incessantly? The pike charge will put your mind (and their minds, permanently) at rest. And if, like me, you are scared that your sloth-like reflexes will prevent you from landing a perfectly timed ability, do not worry: pressing spacebar or selecting a unit will slow in-game time automatically.

That said, the three units mentioned and their respective abilities are all the actual variety there is to your war party. The upgrades available do not alter fundamentally the way each class plays. As well, even if you obtain items that may give a squad a further active ability, or recruit a general with a trait that gives a particular bonus to its respective unit, these did not feel like they created any meaningful differentiation between the components of an army. 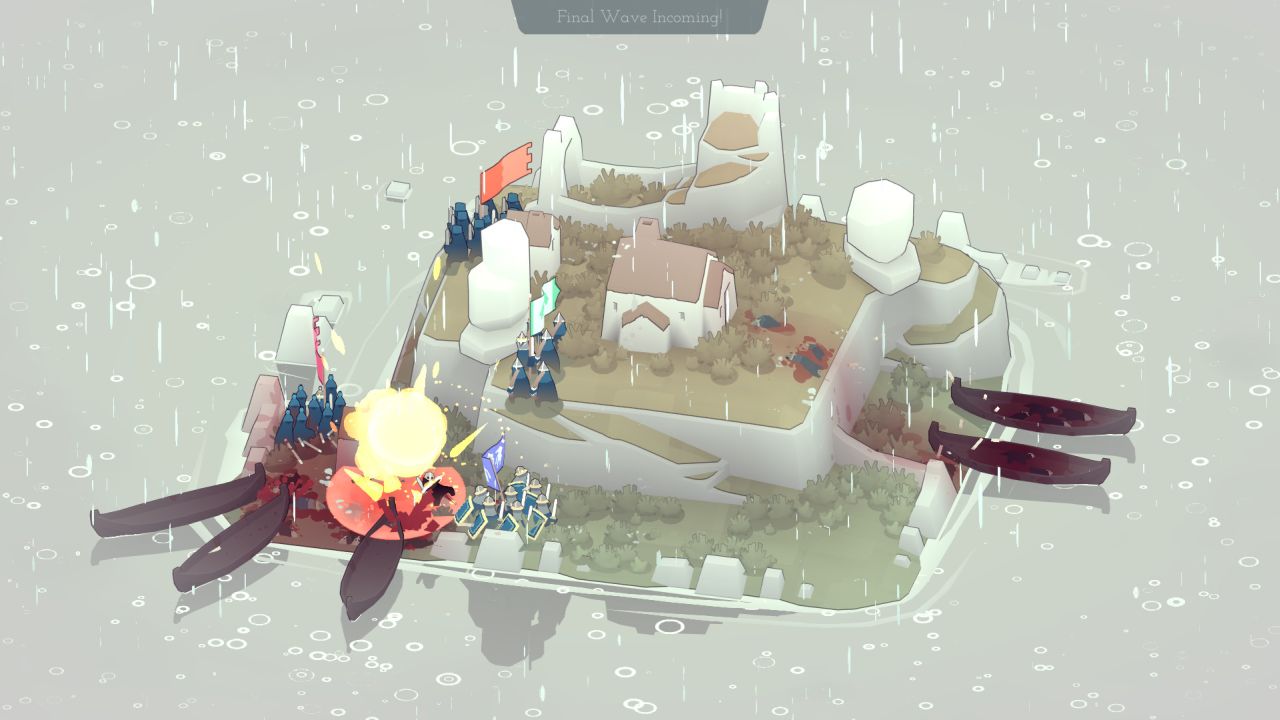 The clunky unit pathing/targeting is perhaps my only other complaint regarding the battle system of Bad North. In a game where positioning is fundamental, there is nothing more frustrating than having your pikes give their backs to a fast approaching sword wielding enemy because they decide to target foes on the other side of the beach. Or when you are forced to flee and most of your top tier pike units take the correct path to safety, but its commander chooses to run through the enemy, get slaughtered and you end up losing the entire squad (since its survival depends on that of its commanding officer).

Bad North is accompanied by very cutesy graphics and sounds. Both the invaders and defender are made of little men flailing around their swords or poking frantically with their tiny pikes, all along a minimalist backdrop. But despite the adorable graphical style, the game contains some particularly brutal scenes. As you play you'll see plenty of beaches becoming stained with blood and cadavers as you and your enemy meet in ferocious melees. You'll witness your subject's houses being put to the torch while you are forced to flee from an overwhelming enemy party. And there is something particularly ruthless in seeing an invader (wielding only a sword and no shield) being shot by an archer or poked to death by a pikeman without being able to strike back.

There is much to be liked in Bad North. The game, building upon a relatively simple 'tower-defense' premise, possesses a very engaging battle system. A system which can be said, after me failing 70% into two of my playthroughs, 'easy to learn but hard to master'. Though it has some creative flaws - like a poorly developed universe and few unit types - these do not have a major impact on the core gameplay which is fun and rewarding. Each level, especially later ones, kept me on the edge of my seat and leaves the player with a true sense of accomplishment with each victory screen.

Our ratings for Bad North on PC out of 100 (Ratings FAQ)
Presentation
87
The art style of the campaign map really gives off a mediaevalesque vibe that helps with immersion. The brutality of the battles together with the visual effects that accompany it - all set against a minimalist backdrop and cutesy graphics - give the game a hauntingly appealing tone.
Gameplay
85
The trivial strategic elements of Bad North are more than redeemed by its battle system. Despite the ease of the early levels, the game ramps up the difficulty at a well-timed pace keeping you challenged throughout. The occasional pathing issues might produce frustrating results, but these are not frequent.
Single Player
67
Although an interesting narrative premise, there is little to no reference to it in-game. Each new game will produce a randomly generated campaign map, but the lack of story-telling and unit variety will make it repetitive by the third/fourth playthrough.
Multiplayer
NR
None
Performance
(Show PC Specs)
CPU: AMD FX-8370
GPU: Radeon RX 570
RAM: 16GB DDR3
OS: Windows 10 Pro 64-bit

90
Except a somewhat lengthy load time when the campaign map is first generated, I found that the game loaded levels very quickly. The battles also run very smoothly - but Bad North is not a graphically intensive game.
Overall
84
All in all, Bad North's gameplay is very engaging and keeps you on your feet. Despite some weakness in the narrative department, most design choices pay off. It is a polished experience that has kept me entertained for a good amount of time. 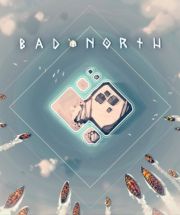