A game of big mechs but small ambitions

Piloting huge destructive robots has always been cool, and perhaps seen by many as a de-facto video game experience. Despite its natural appeal and successes like MechWarrior and Armored Core, the genre underwent many ups and downs over the years, with very few games in the past decade offering the opportunity to control a deadly metal beast. Sure, there's occasional experiences like Titanfall, but that's arguably a shooter with mechs added, rather than a true proper mecha game. Enter Daemon X Machina, a third person action game that looks to bring the mecha game experience back into the spotlight. Sadly, despite occasionally fun combat and freedom of movement, it underwhelms in just about every other area. 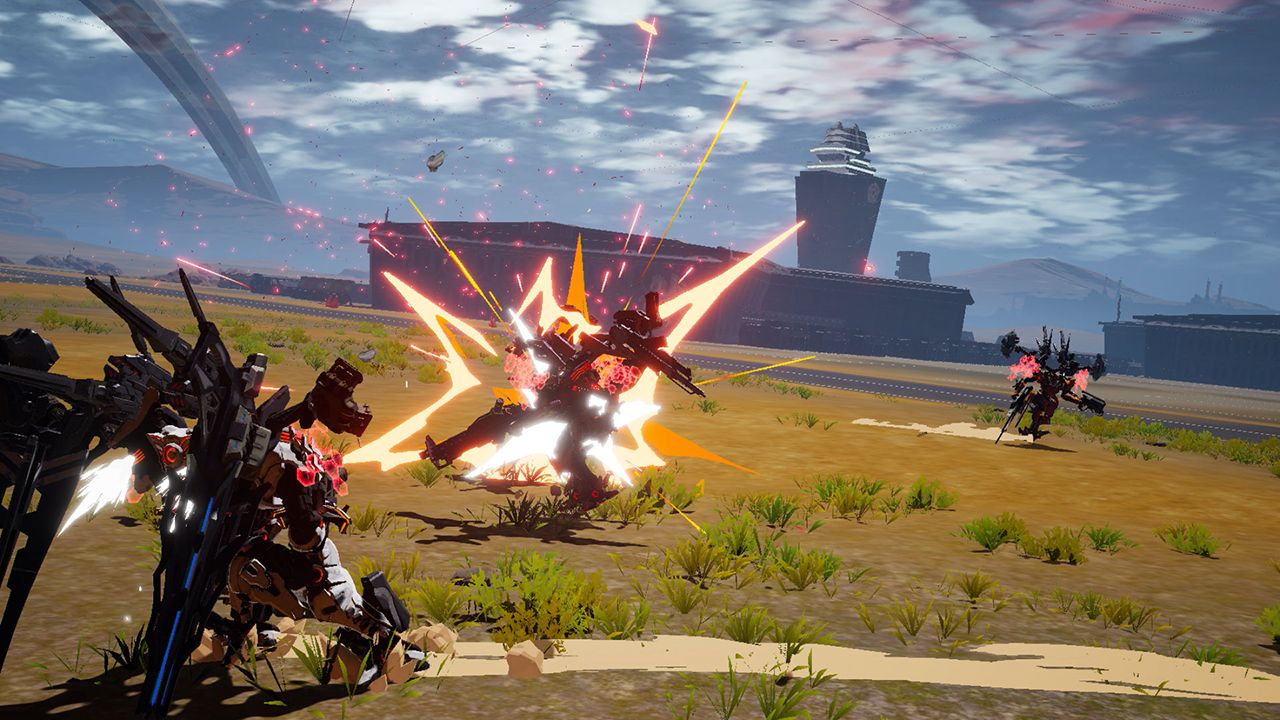 The setting is initially intriguing. We learn that a part of the Moon was torn away, and crashed right into the Earth. This caused an obvious mass catastrophe, and left our planet in rather poor shape. But it also brought with it a material known as Femto Energy, which helped the surviving humans not only develop amazing technology, but also become infused with it themselves. The humans who were able to absorb the power of this material became known as The Outers; not only that, but they could also pilot the newly created combat mechs called Arsenals. Players assume the role of a rookie Outer who is handed the keys to their own Arsenal mech, as you join various mercenaries on their combat missions spanning the continent. You can visually customize both the character and the mech, if you're into that sort of thing.

While the setup seems original and perhaps intriguing, the narrative is a complete let down. While the recently released Astral Chain managed to create a great story despite its occasional anime tropes, Daemon X Machina is the opposite. It goes all-in on the pointless and childish dramatics, while offering a nonsensical overarching plot. An AI named Four controls the process and hands out the missions to the various mercenary companies. But, for one reason or another, all the merc pilots casually meet and chat together, rather than compete for a payday. Before each mission you have to silently listen to all these cliché characters discuss their issues, their apparent distrust for each other, and yet somehow it all works out into friendly banter and everyone gets paid. And whenever the game tries to get serious, it becomes a confusing and uninvolving mess. The "show, don't tell" approach was clearly ignored here, as you scroll past line after line of meaningless dialogue. Eventually, the urge to just skip everything becomes too strong.

The game is arranged into distinct missions that you start from the small hub hanger where your mech is stored. There's not much to do in the hub except run around your mech and perhaps visit the two stores - one store is where you can purchase items for temporary boosts, while the other lets you purchase upgrades for your character. Everything else is handled via the menus, so there's no reason to spend much time in the hub. The menus are straightforward to navigate, but annoying to interact with, as each screen utilizes almost every button on the controller. 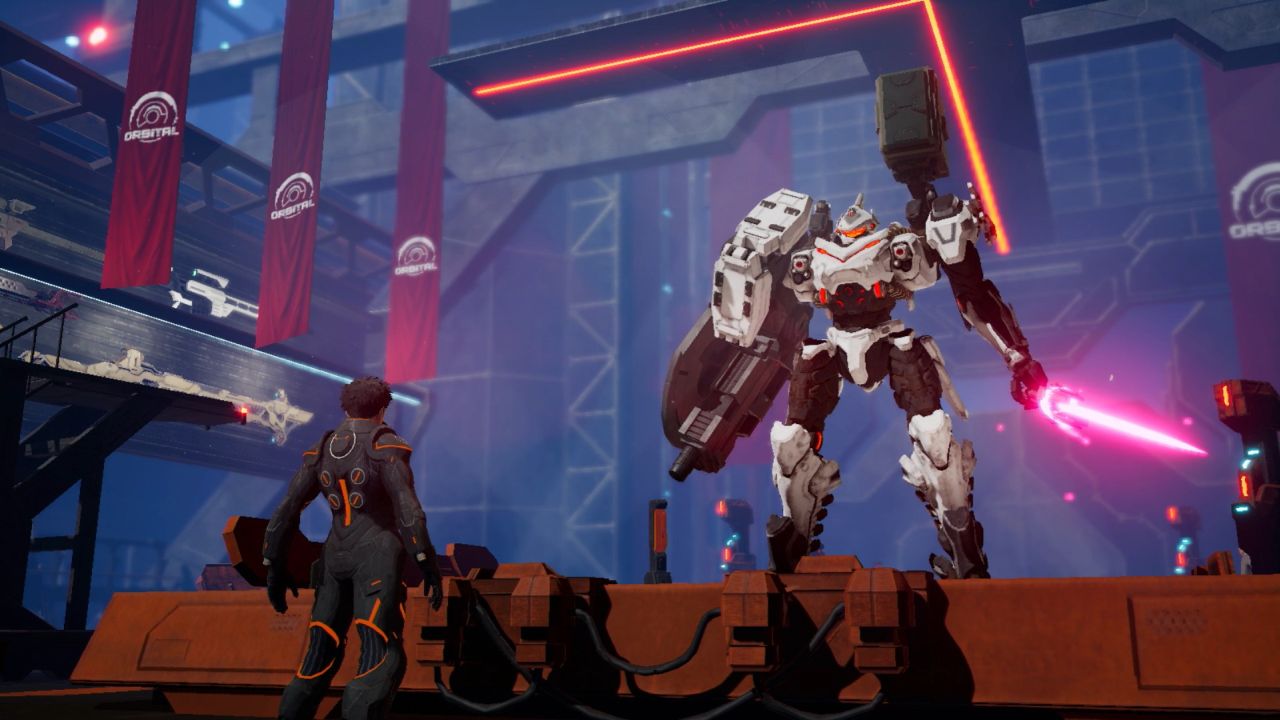 Out on missions is where Daemon X Machina finally shows some promise. Controlling your mech from a third person perspective is satisfying and easy, and you can fly around to your heart's content without any limitations on air time. Your reticule is always on screen and the game clearly indicates when you're in-range to deal damage to targets. Shooting just requires holding the shoulder buttons; it's not exactly thrilling, and the game goes way overboard on making the Joy-Cons vibrate from every little thing. Still, soaring around, taking out targets quickly and efficiently, helps the game have some fun moments.

Over the course of the story you'll mostly be fighting robots called Immortals that have become corrupt/hostile. On normal difficulty, these die in just a few hits, so they are mostly fodder. The AI, both enemy and friendly, is very basic as well, simply floating around and doing a little shooting. On occasion, the game finds reasons for you to fight other mechas, which prove to be much better at evading and can absorb plenty of damage; you'll also encounter Colossal mechs that are quite big in size and take even more bullets to bring down. This leaves the game in a weird spot - the normal enemies are too easy, while the bosses just take too long to destroy. It's not a traditional difficulty spike, as the game doesn't get any more challenging, it's just the fights get very drawn out.

To try and add variety into the action, players can utilize the Femto material to give themselves some special abilities. The missions feature clouds of this stuff that you automatically collect when nearby, filling up your Femto reserve. Once you've got enough, you can use limited time abilities like creating a clone of yourself to help in the fight, increase your damage, defenses, or thrust speed. It's a basic system and one that doesn't always get a lot of use due to the game's relative ease; playing on high difficulty levels could make it more crucial to the experience. 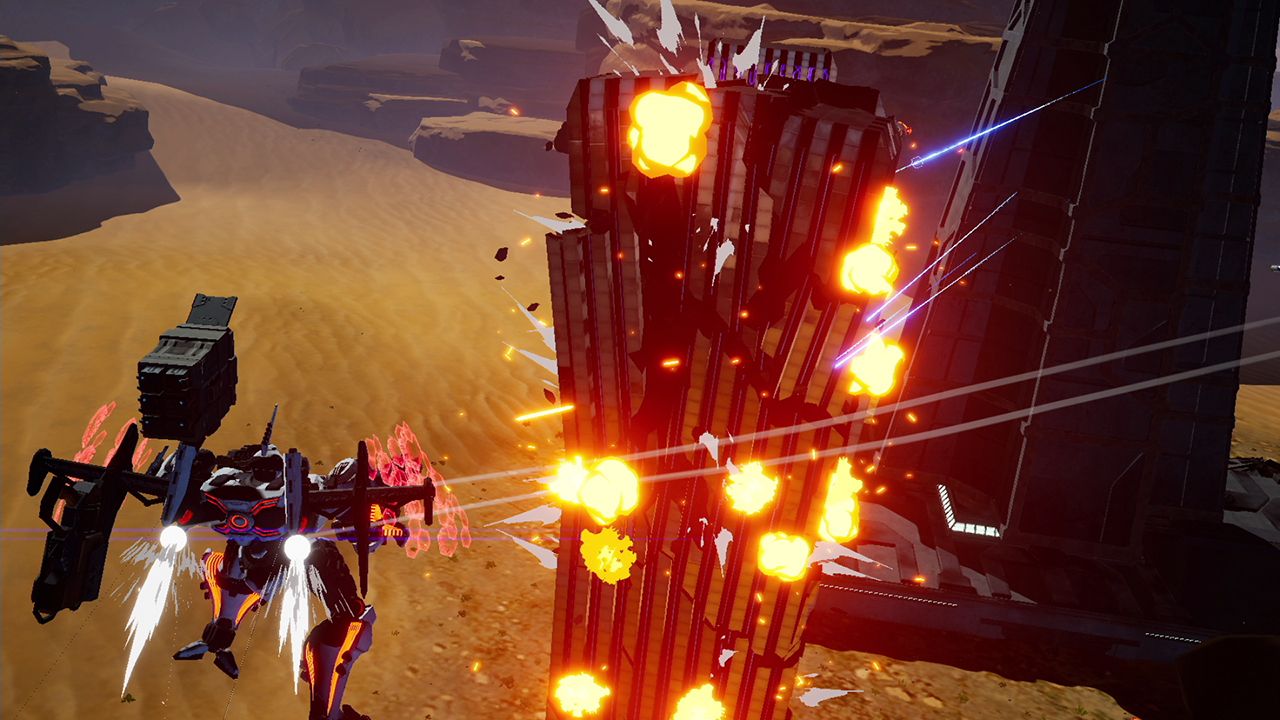 It also doesn't help that the story missions are very repetitive and rigid in their structure. The levels are restricted by an arbitrary boundary wall, leaving you in a not-very-large section of land to fly around. The game uses plenty of annoying scripted moments - the kind where you can deal as much damage as you can to a boss, but he won't go down, because there is some key dialogue being delivered and the script is just waiting for a cutscene, where another merc team swoops in and "saves" you anyway. The objectives themselves are also the same - eliminate enemies, eliminate target structures, or protect something. Without a good story for motivation, the objectives just become very dull.

With easy and scripted missions, the game hopes to add longevity with RPG upgrade mechanics. You get paid for the missions, and you can spend that money buying new components and weapons. You also find new parts from specific defeated mechs. It may seem enticing initially, but you find new parts rather infrequently, and they are not always upgrades to what you already have. Those extra parts can be sold, and instead you can spend money in the Factory menu to research your own parts - but these may not be better than what you already have, so it seems sort of useless.

All the new parts and weapons can be equipped via the Hanger menu. You can equip a new head, each arm, legs, and body. The items you equip add to the total memory usage, and you need to get a better processor to add better parts. They all combine to your overall stats which include firepower, mobility, durability, and so on. The body parts carry their own stats, as well as attachment slots that can give them further boosts. A similar customization system exists for your weapon loadout; you can equip a weapon in each hand, as well as your pylons, shoulder, and auxiliary slot (grenades, etc). The Arsenal's... arsenal is expansive, ranging from typical bullet weapons to rocket launchers, lasers and shields. Each has its own range and damage stats, ammo capacity, and so on. How you outfit your mech is up to you, but given the game's relative ease on Normal difficulty, it doesn't matter too much. Though functional, the RPG systems in Daemon X Machina just aren't very exciting or impacting. 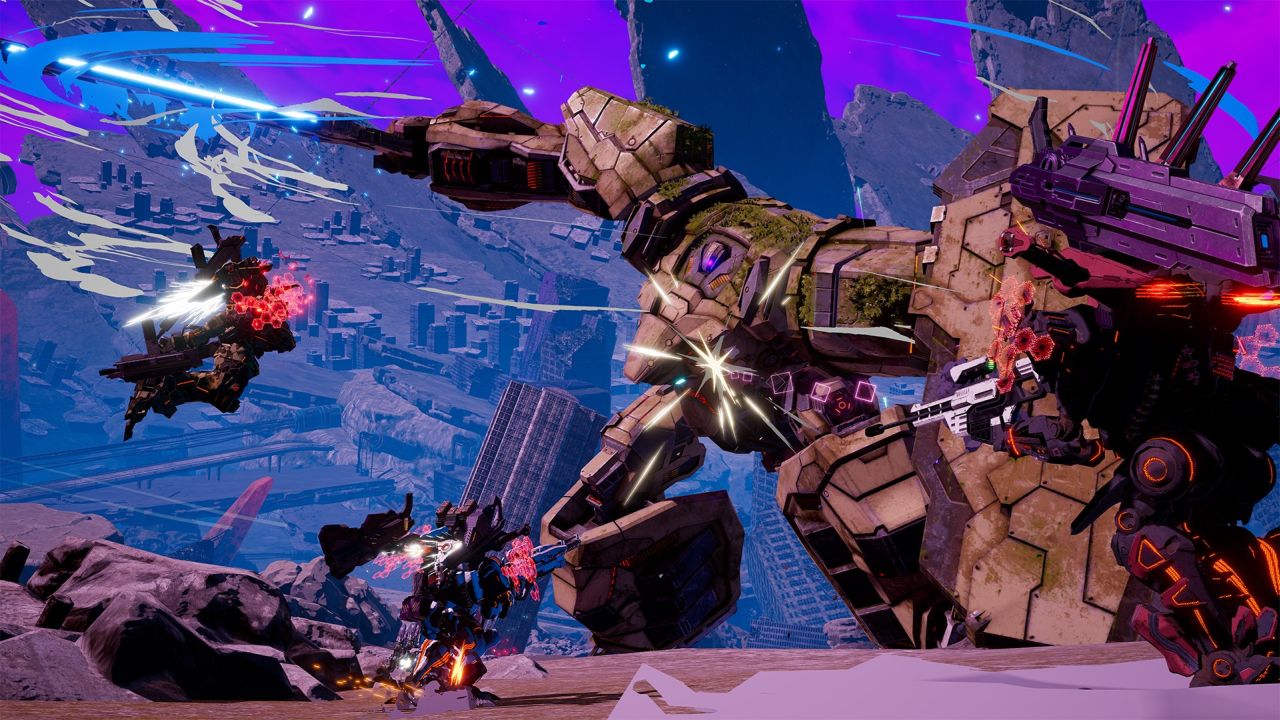 Story missions unlock in a linear fashion, and the objectives are also scripted and story-focused. If you want some variety, there are also separate optional missions you can tackle for extra cash, and these have specific goals such as finishing within allotted time. Lastly, that mostly empty Hanger hub that you always return to gets injected with a bit of activity if you venture into Multiplayer. The cooperative online play turns the Hanger into a lobby, so other players' mechs will appear on the platforms and give it a little more life. It's neat to see what other players are piloting, and tackling missions together is an overall smooth experience. The online missions also offer a more steady stream of rewards and new parts for your mech, though you can't really alter your loadout once in a lobby, perhaps to keep the pacing tolerable and not have players waiting for others to equip their new parts. The basic text chat functions work decently enough.

The game has a decent enough art style, but the technical presentation leaves much to be desired. There are jagged lines everywhere, and the framerate sometimes takes a hit, especially when using the Switch in handheld mode. The levels are often largely barren, with just a few structures thrown around, without much attention to detail. The mechs are decently designed in the hub and menu screens, though again some of that quality is lost once you actually get into the game. The UI is completely overloaded and busy - with bars for health / Femto / boost, player list, minimap, icons for all Femto abilities, objectives, chat menu, and story dialogue popups. The voice acting and music are decent enough.

Daemon X Machina is a misfire. It tries to bring back a long-dormant genre, but the lackluster story, poor missions design, and largely stagnant and repetitive action leave it far from the top of any mecha wish list. The fact that it's a full priced title certainly doesn't help things, as the underwhelming presentation and basic RPG elements don't offer a ton of content or a desire to keep returning. Multiplayer works well enough, but the core gameplay lacks the appealing longevity. If you're a hardcore mecha fan, starved for something new, it's sad to say that Daemon X Machina is about the best that the genre has to offer right now.

Our ratings for Daemon X Machina on Switch out of 100 (Ratings FAQ)
Presentation
55
The mechs look cool and a few levels are interesting, but the game certainly doesn't push even the Switch to its graphical potential. The audio design is basic. The UI is overloaded.
Gameplay
60
It's fun to fly around, and occasionally engage in all-out explosive combat, but there's too little variety to be had, and the AI is very basic.
Single Player
50
Repetitive mission design and dull RPG elements rarely offer the necessary motivation to carry on through the convoluted and poorly told story.
Multiplayer
70
Shooting things with others can be fun, though the menu system could have been handled better.
Performance
75
No real issues, aside from occasional framerate drops, particularly in handheld mode. The Joy-Con vibrations are way overdone.
Overall
55
Daemon X Machina is an underwhelming mech game that offers too few enjoyable qualities to recommend, even for the fans of the genre. Fleeting fun from the action is buried beneath a poorly told story, lackluster presentation, and barebones mechanics.