Transatlantic chills best enjoyed with others

The promise of The Dark Pictures Anthology is a pretty significant commitment by modern standards. Every year new IPs launch, underperform and end up getting shelved, so for Bandai Namco and Supermassive Games to pledge a collection of titles featuring the studio’s cinematic horror style of gameplay is an ambitious idea. The developers broke onto the scene with their surprisingly great Until Dawn, but trying to replicate your own success is tricky and the first effort to do so, Man of Medan, comes up a little short.

The Dark Pictures - Man of Medan has a lot of the same trappings as Until Dawn; the motion capture is impressive and there’s a handful of really good jump scares, but it’s missing the dramatic incident, the cast of likable characters, and the intriguing mystery. The core ingredients are the same, but the final product is just a little lacking. Still, the redeeming part of Man of Medan is that there are some cool new game modes that have been added encouraging multiplayer - and those aspects work quite well.

Man of Medan tells the story of five twenty-somethings out on the ocean for a deep-sea dive. The divers are Julia and Alex, whose long-distance relationship is strained as Alex goes to medical school. Along for the ride are Conrad and Brad, who are the brothers of Julia and Alex, respectively. They explore the waters aboard the Duke of Medan, captained by Fliss. While out on a dive that Brad has located, Alex and Julia come across coordinates that lead to Manchurian gold. They’re excited about what could be a huge discovery, until a group of pirates take the five hostage and bring them to their ship.

Story-wise, the title got off on the wrong foot as I guessed the big narrative twist a half-hour in. A predictable story isn’t always a bad thing, but when you’re working with a game that is intentionally trying to be coy about what is happening, having figured it out right away is a bit of a problem. By the time things are explained to you, about three-quarters of the way in, I was disappointed that there wasn’t one more surprising twist, especially since Until Dawn did that very thing so well. So to have Man of Medan predictably move through the motions is a bummer. What’s worse is that it takes a while to get going. It’s not until the halfway point that the scares start coming and it’s possible many players will have checked out by then.

The cast also isn’t very likable. Having few characters means you spend more time with them and they aren’t quite compelling enough to warrant it. When you have a larger cast, clichés can be good because it can help keep characters straight, but as the cast gets smaller, more nuance is needed and there isn’t much nuance here.

The good news is that once the scares start coming, they’re good. Many are jump-scares, but they're still fun. There are a lot of times when the game asks you to examine or interact with corpses, and I was freaked out enough that I skipped whatever frights might have awaited me. There are also some tense quick-time sequences that determine the life and death of characters or even the party as a whole, which leads to intense moments when you maybe miss one prompt but get the rest and wonder if it was enough to survive.

The game plays largely like Until Dawn. The majority of your time is spent playing as one of the five protagonists, picking dialogue choices and making decisions that alter the course of the story. In-between the dialogue segments, you move around environments, interacting with items of interest. The most important thing to find are paintings which reveal ways that characters can die. The dialogue choices seem to have a nice effect on the plot; during my playthroughs I saw a number of different events. The movement mechanics look natural and are impressively animated, but interacting with items can be a little clunky. Believe it or not, the quick-time sequences are actually quite good. They’re not too easy, but also aren’t impossible and are interspersed nicely throughout the 4-6 hour long adventure. While you might want to replay the game yourself to see all the endings, I doubt many will. What’s more likely is that you’ll find yourself replaying the game with different groups of friends thanks to multiplayer options.

While the traditional solo play is solid, perhaps the best way to experience Man of Medan is with multiplayer. First is Movie Night, which is a hot-seat multiplayer mode where you and your friends each pick a character and control them during the game. At the end of acts, you’ll receive feedback based on the choices you make and the results that occurred. Much like Supermassive’s PlayLink game Hidden Agenda, Man of Medan is much improved by having a crowd reaction. Laughing with your friends after a jump scare or arguing about how a character got killed proves the mode to be a success.

The second multiplayer mode is Shared Story, which is an online co-op version of the game. Unlike Movie Night where it’s the same as the single-player experience, Shared Story splits the story in two, giving both players different perspective. Sometimes the two characters you’re controlling will come together for an exploration segment or a conversation, and sometimes the action will occur in two different places. I saw a fair amount of content created just for this mode, so it almost becomes a must-play as certain plot points and dialogue make more sense with these additional scenes. Consider it the director’s cut of the game.

The game looks quite good. The motion capture is still the calling card of Supermassive and it’s only gotten better since Until Dawn. The performances aren’t spectacular, but serviceable; Shawn Ashmore acquits himself quite nicely as the puck-ish rogue. Still, I don’t know how well the South Pacific lends itself to horror. One tends to imagine sandy beaches and blue waters, and even once you’re on the ship where the horrors start, it still always looks like a ship - industrial, metal, grey. There just isn’t a lot you can do with it. Supermassive tries hard to get creative, but there’s little that stands out to me in the design of the setting.

Where the game struggles the most is in the technical elements. I hit a few bad bugs, one that caused a character’s model and dialogue to be absent from a scene and wasn’t fixed when we attempted to restart. Another time the game crashed at the very end. There were also frame-rate issues that made exploration a pain, though thankfully not during the quick-time sequences. There’s nothing game-breaking, but it’s certainly rough around the edges.

If you liked Until Dawn, you’re likely going to have a good time with Man of Medan, just not as good of a time. It has some pacing issues and isn’t quite as charming or interesting, but the meat and potatoes of what put Supermassive on the map are still there. If nothing else, let’s hope that Man of Medan is only the start of The Dark Pictures Anthology and the future entries will build upon this foundation.

Our ratings for The Dark Pictures - Man Of Medan on PlayStation 4 out of 100 (Ratings FAQ)
Presentation
70
The motion capture looks great and the animation is solid, but the setting fails to be memorable.
Gameplay
80
The dialogue choices have some nice branching paths and while the exploration isn’t perfect, the quick-time sequences have never been better.
Single Player
70
It takes the story a while to get going, but the latter half is scary and tense.
Multiplayer
85
This is really how you should be playing the game. Movie Night and Shared Story are both great ways to experience the adventure.
Performance
65
Frame rate issues, missing character models, and crashes, I had a bit of everything, though nothing ruined the experience.
Overall
74
The Dark Pictures - Man Of Medan takes a while to get going, but eventually the scares start kicking in, and it’s a lot of fun screaming alongside your friends. This is a game that’s meant to be shared and is a blast to play in groups. A promising start to the horror anthology that will hopefully only get better with subsequent entries.

The Dark Pictures - Man Of Medan 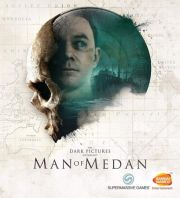 All videos for The Dark Pictures - Man Of Medan (5)
Advertisement ▼