Close to the Sun Review

A static imitation that needed a deeper connection

If imitation is the sincerest form of flattery, then the developers of Close to the Sun must love BioShock. Not all imitations are bad; some of the best games are built off the foundations of others. Close to the Sun is certainly not a BioShock clone, it just shares its premise, themes, narrative delivery, and art style. Without much interaction or action, the actual gameplay is more of a horror/adventure mix that could be considered a lightweight version of Outlast. Unfortunately, it too often steps too close to being a walking simulator and leaves the player stranded in the process. 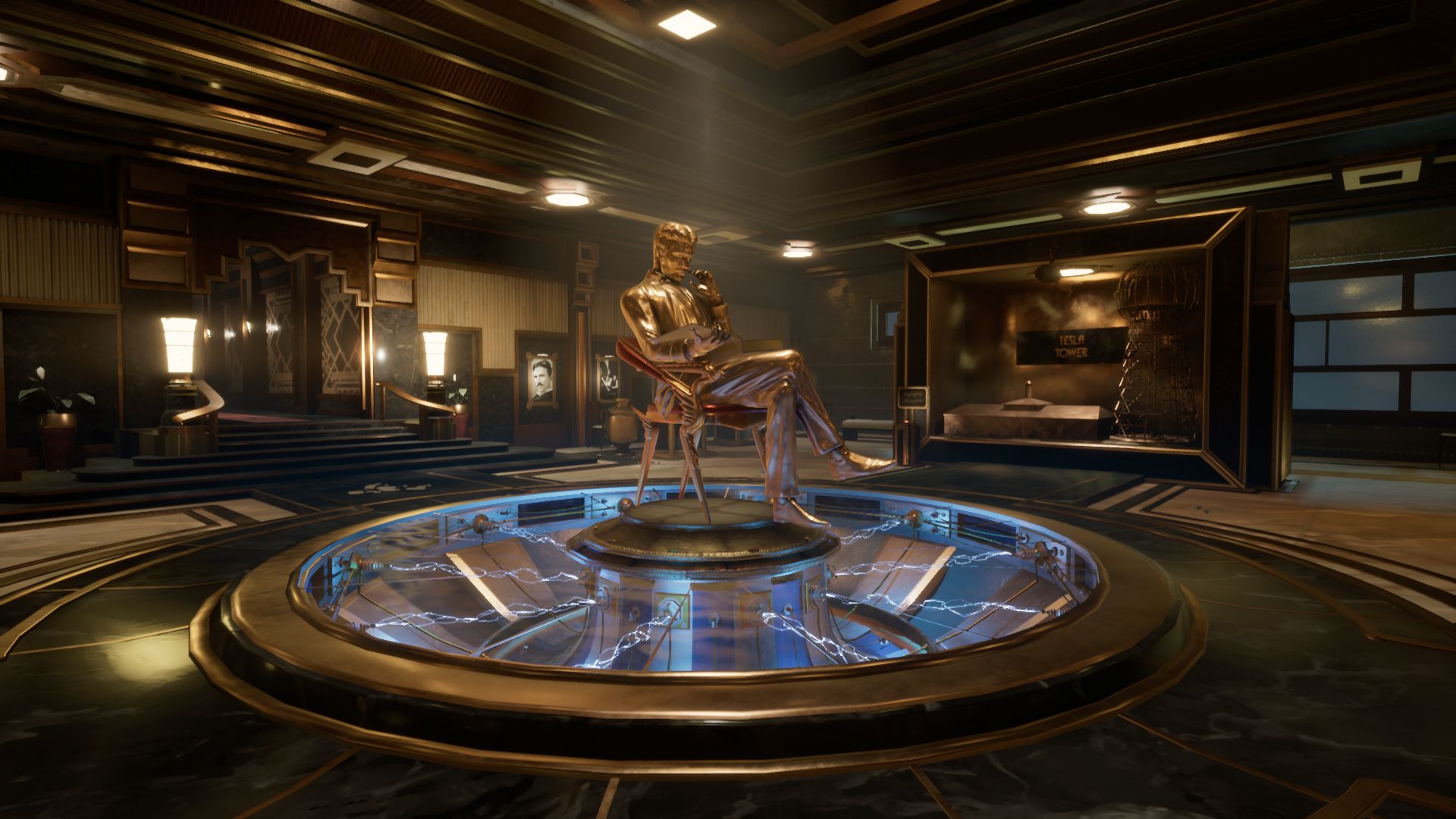 The Helios is home to great minds

Set in the late 19th century, you take the role of Rose Archer, a journalist who receives a letter from her sister, Ada. The note compels Rose to come aboard the Helios, an enormous ocean liner owned by Nikola Tesla in a version of history where he provides half the world with electricity. Helios is home to the world’s best scientists, doing what they do best—pushing the limits of technology and not caring about the catastrophic consequences. After Rose comes aboard via an automated boat, she finds herself trapped inside. The ship is under quarantine and there are dead bodies everywhere.

If this sounds familiar then you probably played BioShock, but the similarities don’t stop there. It employs a similar art deco visual style, which would be quite decent if it was not so dark. It also starts with ruminations about spies aboard the Helios, coming to steal tech from Nikola Tesla, the richest man alive. And there is even the aftermath of a masquerade ball to witness, despite the fact that it has no real bearing on the story. While the story breaks away from this uncanny familiarity toward the end, it also concludes poorly.

But the narrative isn't all bad. It cuts straight to the point early, as you get in contact with Ada over the radio and find out that she did not send the letter. The game keeps the player asking questions: what happened, who is responsible, how are we getting off the ship, and where did that bloodied limb come from? Most of the story is told by characters that help you via the radio. The voice performances by Rose and Ada are adequate, although some of their lines are bizarre. Aubrey, a mad-scientist character that helps Rose by opening doors, is the best because he is funny and exuberant in just the right proportions. 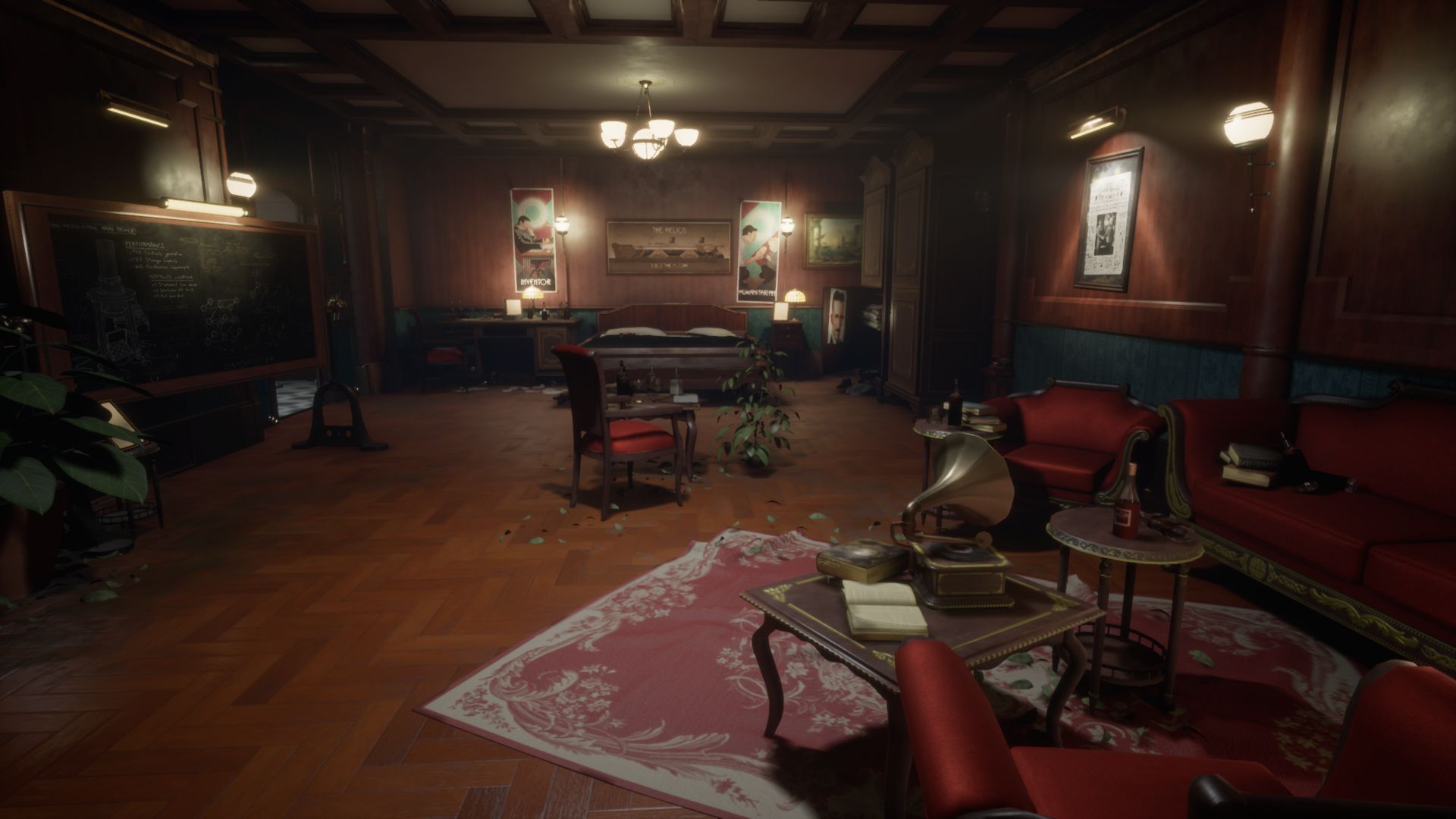 Come for the science, stay for the 19th century decor

While the story does enough to tug you along, the basic adventure puzzles do not. As you walk around the ship, you might need to shut down power by entering a code. The code is found by following the only corridor to its end until you stumble upon a blackboard with the answer written in big bold letters. Puzzles are always far too easy and there are not many of them. Most of the time, Rose is merely opening doors, walking through samey indoor spaces, and listening to the voices on the radio that tell her where to go next.

Horror elements try to break up all the walking with moderate success. The game starts by putting Rose into a world where things have gone terribly wrong. It’s an alluring setting that creates enough tension. Then the nightmare builds steadily, starting with odd sightings, then jump scares, and finally plentiful gore. When the player is in the thick of death, the game throws in a creature that wants to eat your face. It takes almost two hours before Rose faces an actual deadly threat, which is quite refreshing.

When you encounter a threat, you must run. There is no stealth, despite one early sequence that forces Rose to crouch. The threats you face, both human and supernatural, are avoided by sprinting down linear corridors for a minute or so until a scripted moment prevents them from pursuing further. Chase sequences are clearly influenced by Outlast—you can even look over your shoulder—but are nowhere near as finely choreographed or intense. The corridors are bland, the threats are stale, and the route is easily navigated. There are also only about seven chases in the whole game, with nearly half of them taking place in the last hour. 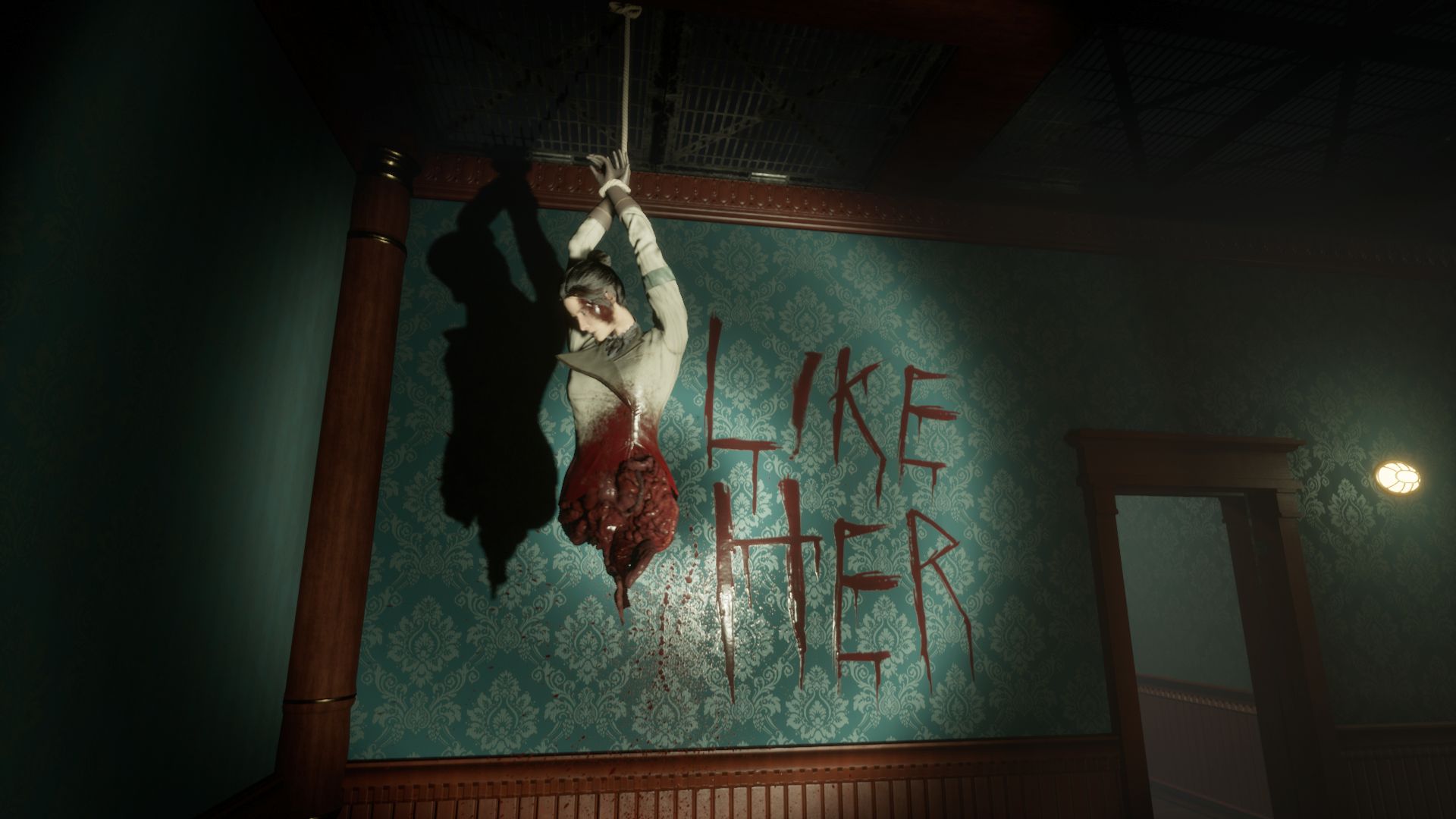 Without much gameplay, you just have to hang around

Despite the occasional bursts of action, the adventure is far too static. With a few minor tweaks it could be classed as a walking simulator. Even though there are bodies literally everywhere, there is no sense of being in a dangerous ecosystem because every threat you encounter is scripted. Actual face to face contact with friendly characters is limited, possibly due to the crudity of their models and wooden animations, further pushing the player away from forming a connection with the world that started so promisingly.

No real connection is formed with the previous inhabitants either. A handful of notes mention some dead characters, but provide too little to know them beyond a surface level. Ghostly visions of the past happen regularly (linked to the supernatural events) but they are rarely more than generic translucent characters walking in one direction. This does nothing to enhance the world compared to pure imagination.

On the upside, the world looks decent enough, even if it is regularly poorly lit. Powered by Unreal Engine 4, the retro furniture looks quite good and room detail is reasonably high in most places. The accompanied electrical FX (this is Tesla’s ship after all) are quite neat, even if they are not used enough for gameplay purposes. Unfortunately the performance isn’t always smooth; some of the larger open decks had noticeable framerate drops. 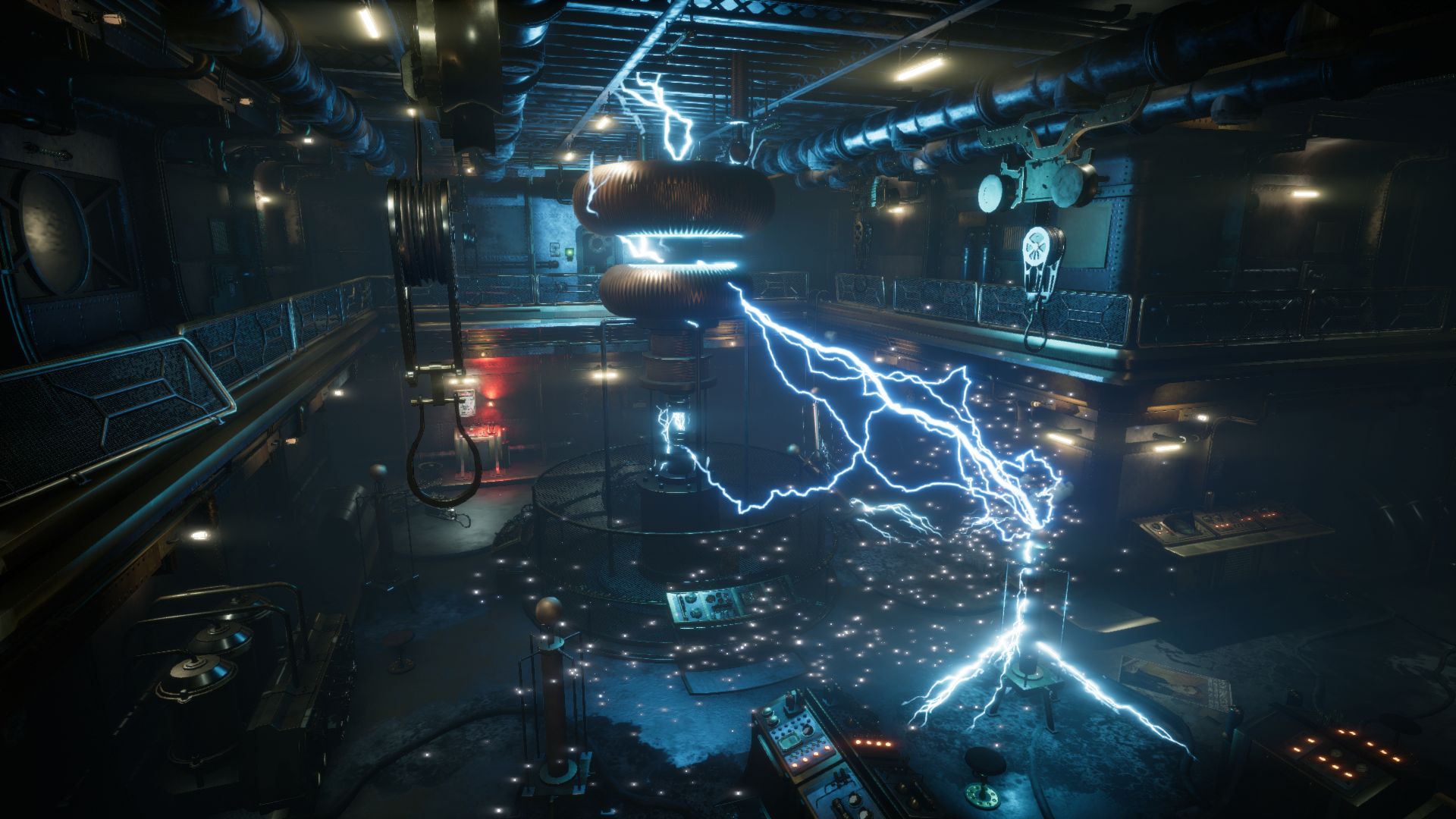 It's shocking what happens when you leave Tesla in charge

Close to the Sun might be worth checking out if you are particularly enamoured with the art deco visual style, or love when scientists get together to break the laws of physics and it all goes wrong. The premise is not original but still appealing. Its narrative manages to be interesting for the entire five hours, but not with great conviction. With shockingly easy puzzles and bad chase sequences, it is only the gradual horror arc that could be seen as a modest success. Consider picking up Close to the Sun when it is heavily discounted, but even then it might be better to revisit Rapture instead.

Our ratings for Close to the Sun on PC out of 100 (Ratings FAQ)
Presentation
65
Decent retro designs in a dark setting with plentiful gore. Voice work for the small cast is good enough and there are some funny moments from Aubrey. Character models and animations are mediocre.
Gameplay
45
Puzzles are too easy and the chases are bland. The horror element works okay because of its gradual arc, but none of the mechanics are deep enough to offer anything of genuine substance.
Single Player
55
The story raises enough questions to keep the player invested for the five hour runtime, although many narrative moments are uninspired. The ending is poor and some dialogue is odd.
Multiplayer
NR
N/A
Performance
(Show PC Specs)
CPU: Intel i5 3570k
GPU: XFX RX 480 GTR Black 8GB
RAM: 16GB DDR3
OS: Windows 10 Pro 64-bit

65
Chugs in some of the larger interior spaces but runs okay most of the time. Graphical settings reverted when loading into a new chapter.
Overall
59
Simple puzzles and bland chases prevent Close to the Sun from living up to its numerous inspirations. While the game has a decent retro style and an intriguing horror narrative, it never makes the player a true participant.

Close to the Sun 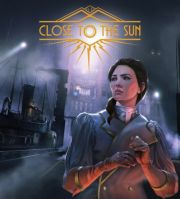 Nero
Platform: Xbox One
Released: May 2015
Developer: Storm in a Teacup

All videos for Close to the Sun (1)
Advertisement ▼