The simulation genre is an intriguing one. Games that strive to recreate a real-world activity can be educational, they can entertain, and they can show you the ins and outs of something that you have no way to experience otherwise. Between the oddities like Bus Driving and Street Cleaning simulators, there's also the Flight and Mechanic sims, which together combine to create arguably one of the most diverse genres in all of gaming. The latest such title is the PC Building Simulator, which comes from The Irregular Corporation and will probably hit fairly close to home for a lot of its players. 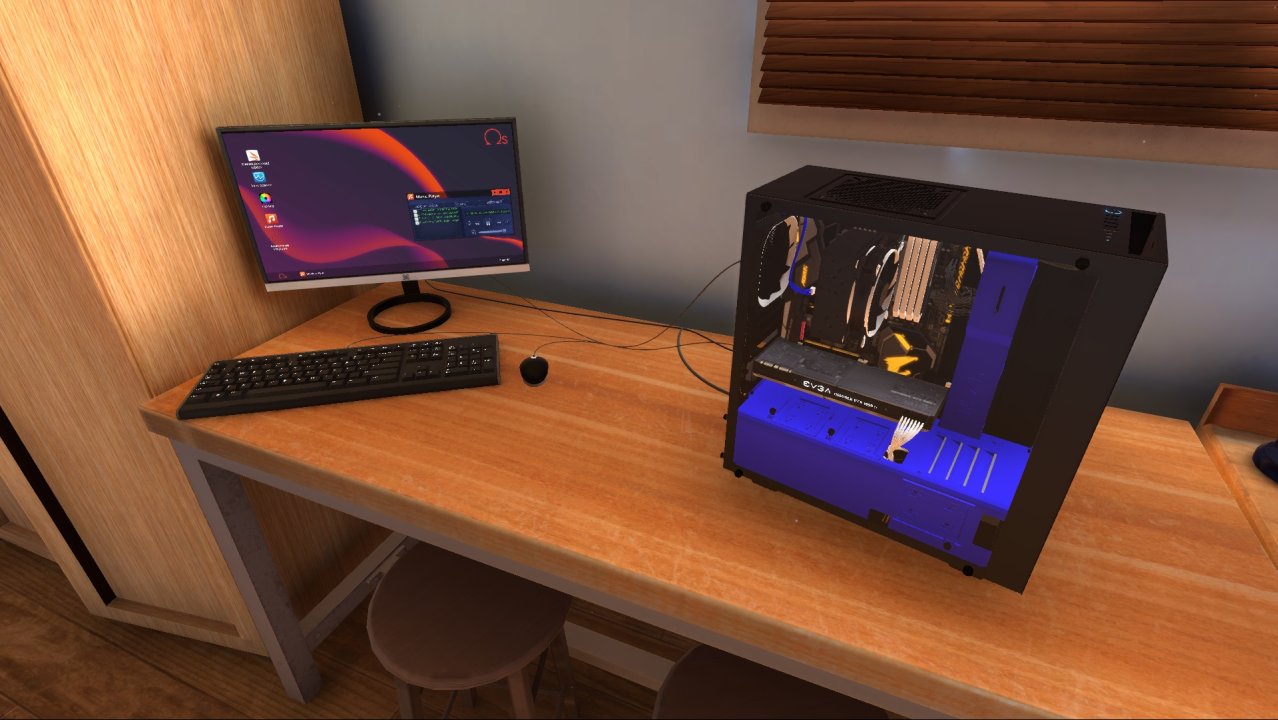 As the name might imply, the title aims to simulate what its like to build, operate, and troubleshoot personal computers, with an emphasis on physical components. But before we get into that, any good simulation game such as this needs a "wrapper", a reason to be working with all this hardware. Much like others in the genre, your goal in PC Building Simulator is to run a successful PC repair and upgrade business, from an apartment. In first person view, you can explore the small space, though for the most part you'll just be picking up /dropping off PC boxes in the hallway and to one of your workbenches.

You have a personal PC, where you can check your email, make purchases, and perform other functions. You'll get daily new client requests via email, which outline the tasks and any terms, the pay, and you have a choice to accept or ignore them. The troubled PCs arrive next day after accepting the job; you can control when to end the day by leaving the apartment if there's nothing left to do. As you complete repairs and earn money, you can upgrade the apartment to get more benches so you can have a few PCs setup at the same time. Your inventory of PC parts will grow, so you don't have to keep buying things from the online store every time – where inventory also increases exponentially. And of course, to keep the business running there are bills to pay. All in all, the game becomes addicting surprisingly quickly. Managing your repair jobs, inventory, and time becomes an engrossing task and if you've ever worked in real job like this, it might even give you flashbacks. If that's not a compliment for a simulation game, I don't know what is.

With the overarching gameplay loop being well designed, you can get down to business. For each repair request, you can check out the list of hardware in the trouble PC ahead of time, and order the correct parts from the online shop. For example, someone asks you to upgrade their hard drive or RAM – you check to see what they already have, how much space/RAM they want, and order the drive from the shop. The PC usually arrives the next day for you to work on, but the shop items may take a little longer. You grab the PC, bring it to the bench, and complete the request. A list of the issues with the PC is helpfully visible at all times, so you won't forget what you need to do. 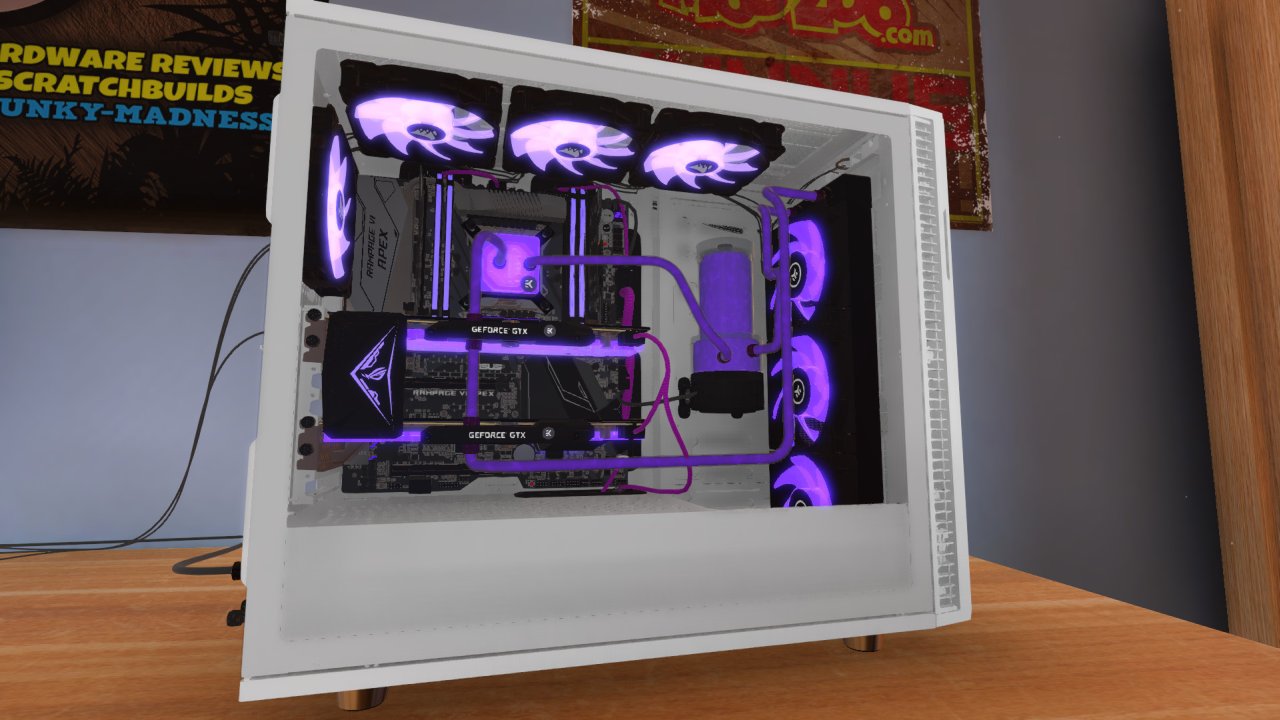 As a simulation, there are many manual tasks. You get the PC on the bench, undo the side panel screws, and look at the interior. To perform any action you have to hold the mouse button for a moment, so you won't accidentally miss-click on anything, and the game highlights the parts you need to interact with (i.e. the location of the screws that hold the side panel in place). You can rotate the camera around the PC plus zoom in/out freely, and get at the components you need to work with. Things are detailed down to plugging the right cables in the correct ports – though you can't screw up, as the game only highlights and lets you connect things where they belong. So when installing RAM, you'll have to pull the clips out first; when installing a hard drive, pull out the tray; with a new CPU cooler, remember to connect the fan to the motherboard (and add the thermal paste!). It's fairly detailed.

The overall PC interaction menu is straightforward – you can add components, remove components, work with cables, and power the system off/on. As the game goes on, of course the tasks get more numerous and require more steps to resolve – you could be asked to troubleshoot overclocking, install liquid cooling systems, remove viruses, reach certain 3DMark scores, and so on. You hook up the repair PCs to a spare set of inputs and monitor, where you can interact with it such as going into BIOS, installing software to overclock or control the case LED lights, and so on. It's a very basic operating system simulation, but it does what it needs to. Though by no means exhaustive, the breadth of activities is definitely impressive.

And yet, for all the things PC Building Simulator gets right, there are some shortcomings. For one, while the gameplay loop is initially addicting and it's fun to interact with PC hardware at such a high level of detail, it can grow fairly repetitive. The flashbacks to a real PC repair job certainly aren't all of the pleasant variety. Doing similar things day in and day out starts to feel like a grind – removing individual screws every time, plugging in the monitor and keyboard, using a spray can to blow out dust, and watching software install bars. Customers get more demanding with very specific requests, like a certain shade of a color cable. Some users also want you to achieve certain benchmark scores, which is all fine and well except the simulation of the benchmark takes rather too long. 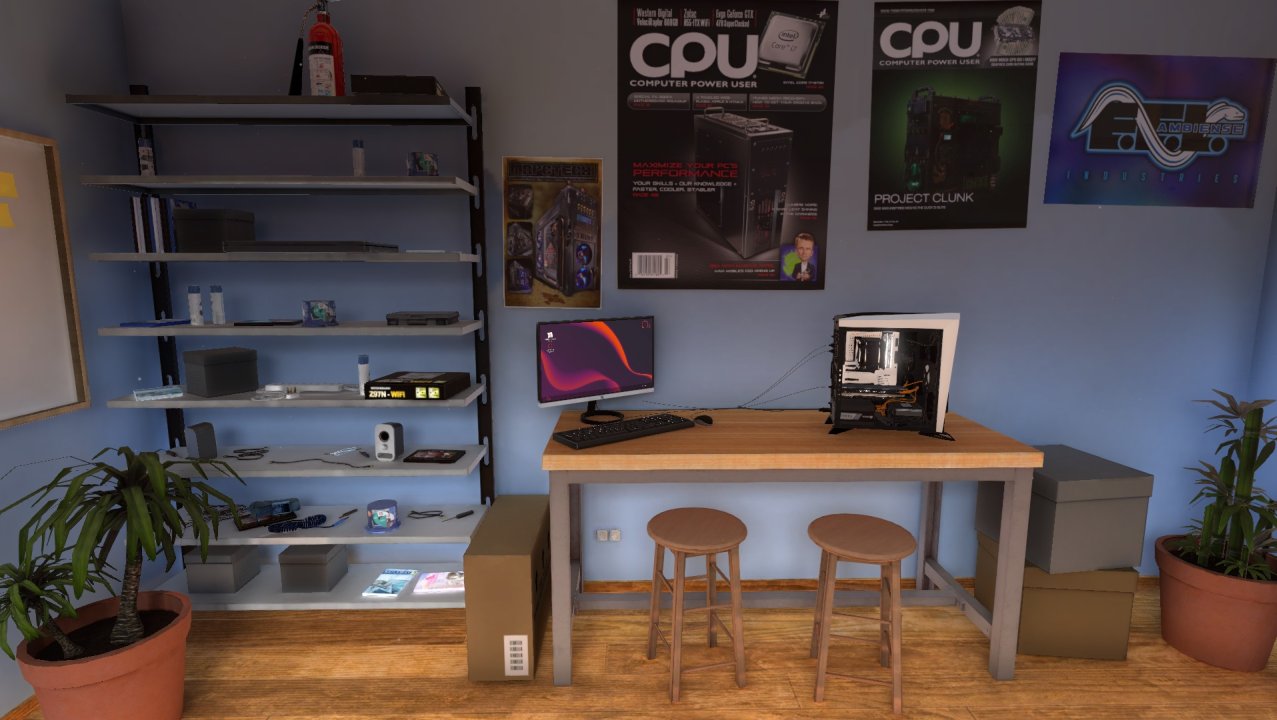 The game also took the effort of adding real component manufacturers to the mix, to help it feel more authentic. CPUs from Intel and AMD are present, along with components from Gigabyte, Cooler Master, MSI, Corsair, and other enthusiast brands. These are mixed in alongside the generic brand parts. On the one hand, this gives the game a pretty solid real-world connection, but on the other hand, it puts a hard lifetime cap on the game's relevance, as new components are released all the time and may not make it into the game. While it's cool having these components in the game, I wouldn't really advise planning your future upgrades/builds in the game - it's hardly a perfect simulation. Having said that, it is cool to re-create a purely visual 3D model of your current or future rig.

Despite its thrive for realism, the game is not overly detailed in some areas – for example hooking up hard drives is just a matter of running generic cables, which are not differentiated in-game as SATA and power. It feels like the game tried to incorporate a ton of different elements that PC building involves, but didn't quite go all-in with many of them. And if you're already familiar with PCs, the game lacks much of a difficulty curve, as it will highlight what physical pieces go where and often tells exactly what you should do to resolve an issue.

If the career mode doesn't hold your interest beyond a certain point, you can just switch to free build mode, where all parts are available and free, and you can create anything you want. You could essentially build a system out of authentic components that closely resembles your own, and use it as a 3D model for future upgrades perhaps. Or just put together an LED monster just because you can. If you're into building PCs but can't afford to do it in real life, this is a decent way to spend many hours just messing around with hardware.

The game looks nice for what it is – the hardware is all nicely detailed and the 3D models of components do a good job of looking like the real thing. The interfaces and menus are all intuitive. The soundtrack is generic techno that you can replace with your own music folder. 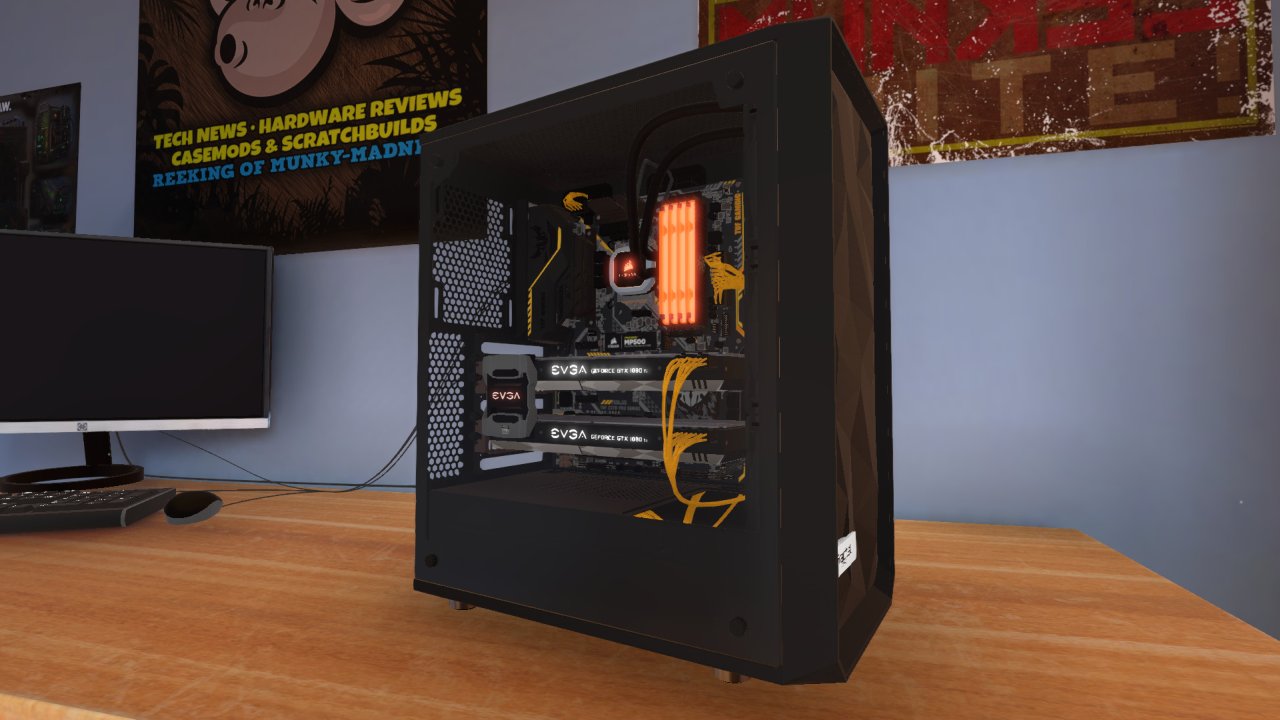 PC Building Simulator does a decent job recreating a hobby that many folks who play it might already be familiar with. If you're completely new to building computers, the game also does a good job through its tutorial and the career mode gets you started with basic system operations and components, though it's by no means fully realistic. For enthusiasts, it's probably fun to mess around with the free build mode. Given its fair $20 price point, this is a worthwhile sim for those looking to delve into the hardware world.

Our ratings for PC Building Simulator on PC out of 100 (Ratings FAQ)
Presentation
70
The individual components are nicely rendered, but the game isn't going to blow you away with photorealistic replicas of the hardware.
Gameplay
75
As a learning tool, it's pretty fun and will get you started on the major components of any system. The enthusiast-level tweaking options are also welcome additions.
Single Player
70
Running the repair business is fun and engaging at first, but does get tedious as you're forced to do the same things over and over. Free build mode is good to mess around in.
Multiplayer
NR
None
Performance
(Show PC Specs)
CPU: Intel Core i5-4670K @ 3.80 GHz
GPU: ASUS Radeon RX 580 8GB
RAM: 16GB DDR3
OS: Windows 7 Professional 64-bit

90
No issues
Overall
74
PC Building Simulator is one of the better entries in the genre, with nice touches of authenticity and attention to detail. It's too limited and simplistic to replicate the experience of putting a rig together yourself, but it does a good enough job to get you started in the right direction. 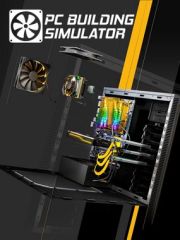