A worthy successor to a classic series

While it may not share the same name, Monster Boy and the Cursed Kingdom is technically a continuation of the classic Wonder Boy franchise. The relationship between the two may be difficult to follow, but just know that despite a different name and development team, they all fall under one big umbrella. Although the original series never made it out of the 16-bit era, its legacy has endured over the years. First with the acclaimed remake of The Dragon’s Trap, and now with the arrival of Cursed Kingdom. 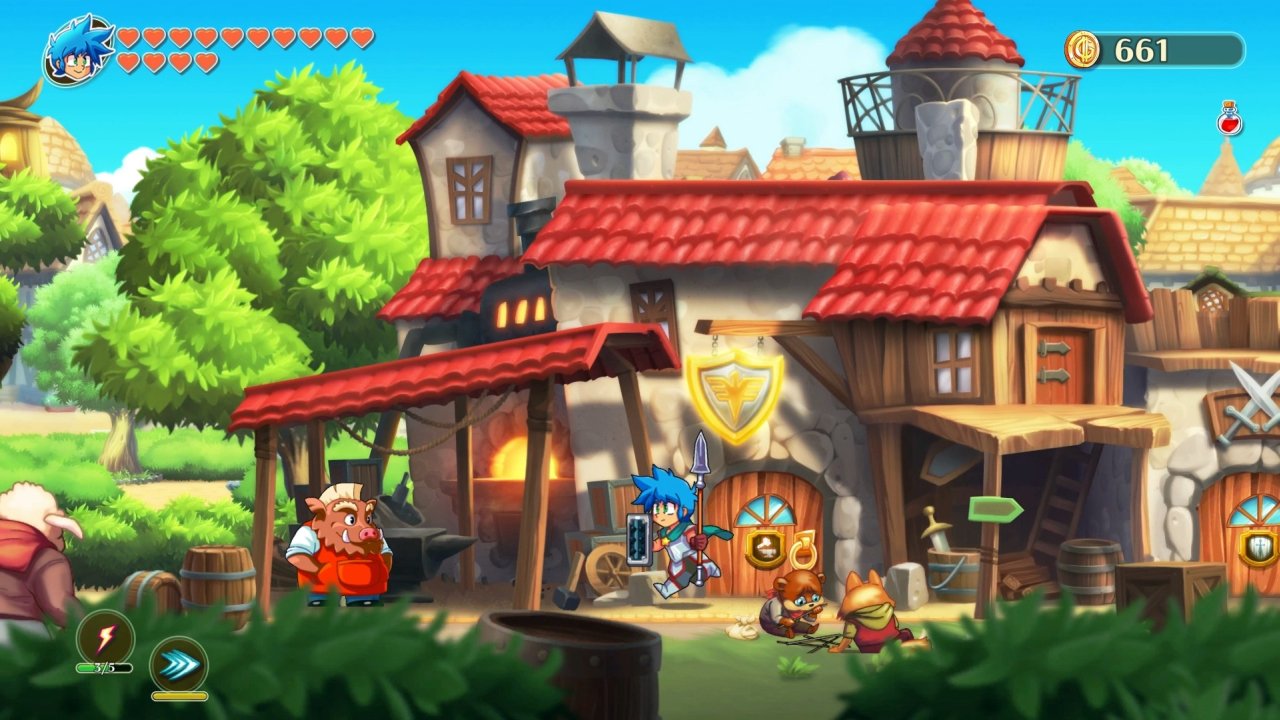 In Monster Boy, you play as Jin, a young, blue-haired boy. A hero through and through, Jin must step up to save the day when his uncle Nabu begins to turn citizens across the land into animals of all shapes and sizes. The so-called Wizard of Booze even turns our protagonist into a portly pig the first time they meet face-to-face in the game. Now, not only due to pressure put on him by the locals, but also because of his own visage, Jin must find a way to stop his uncle, and revert the world back to normal.

Despite a fun premise and some interesting characters, the Cursed Kingdom’s story is pretty sub-standard. There’s nothing inherently terrible about it or anything, it’s just kind of there. Which is a shame, because the animal transformation angle could have been used in more interesting situations. It’s fun when Jin gets slammed, either due to his drunk uncle’s actions or his own unsightly appearance, but these moments are few and far between. A platformer with a good story is not exactly common, and Monster Boy doesn’t buck that trend.

Even if the animal transformation angle may disappoint story-wise, it does serve as the backbone of Monster Boy’s gameplay. While Jin first begins his quest as a pig, he eventually gains the ability to transform into a handful of other creatures. As you further explore the land, you’ll add the snake, frog, lion and dragon to your arsenal of transformations. Each one of these beasts contains their own unique abilities, and you’ll often need to switch between them in order to advance past the trickier sections of the game. 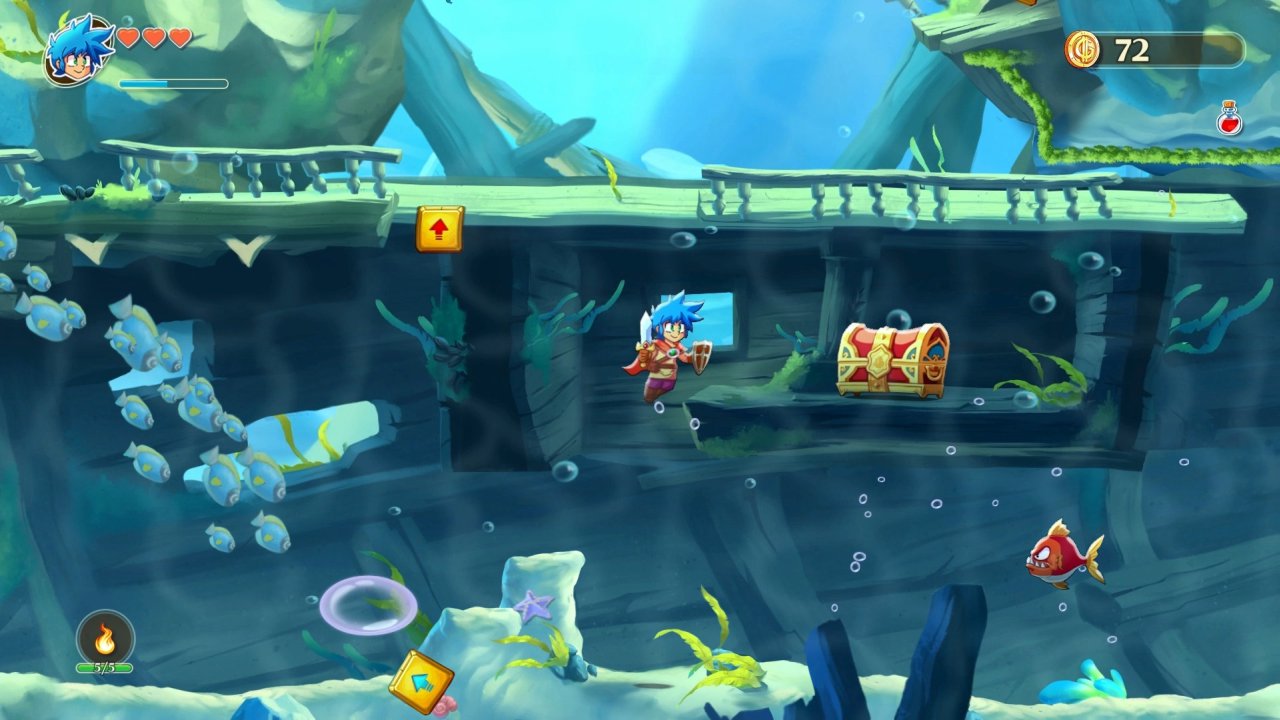 Another wrinkle introduced to the gameplay is the variety of items Jin can wield. Certain animal forms can carry different shields, swords and even boots that provide useful bonuses. One pair of boots may allow him to walk across clouds, while a special shield can reflect certain types of attacks back at enemies. Much like transforming between creatures, it’s easy enough to swap between equipment to find the perfect set for the current situation. These items can even be upgraded over time, which gives the title a nice RPG-flavor that was a welcome surprise.

The nimble way that developers Game Atelier have you changing forms and items is really why the Cursed Kingdom works as well as it does. Having to constantly swap between everything could have been disastrous, but here, everything snaps together incredibly well. It makes moving through the quite difficult latter portions of the game enjoyable, instead of how frustrating it might have been. The flow of new features, whether it’s a new spell or special sword, also help the title avoid getting stale. Considering the sizable campaign (20+ hours), that’s a pretty high bar to clear, if I do say so myself.

While I wouldn’t call the title a Metroidvania, it’s hard to ignore the influence that genre has had on Monster Boy. Most of the game is a traditional platformer, albeit one with some RPG-lite mechanics that were previously mentioned. However, as you unlock new forms and purchase better items, you’re free to go back to previously conquered areas in order to search out bonuses. It’s all optional, but it’s often worth the extra effort to go back and take a deeper look. If for some reason you don’t find the main path already treacherous enough, going down the worm-hole of bonus content will provide a stiffer challenge. 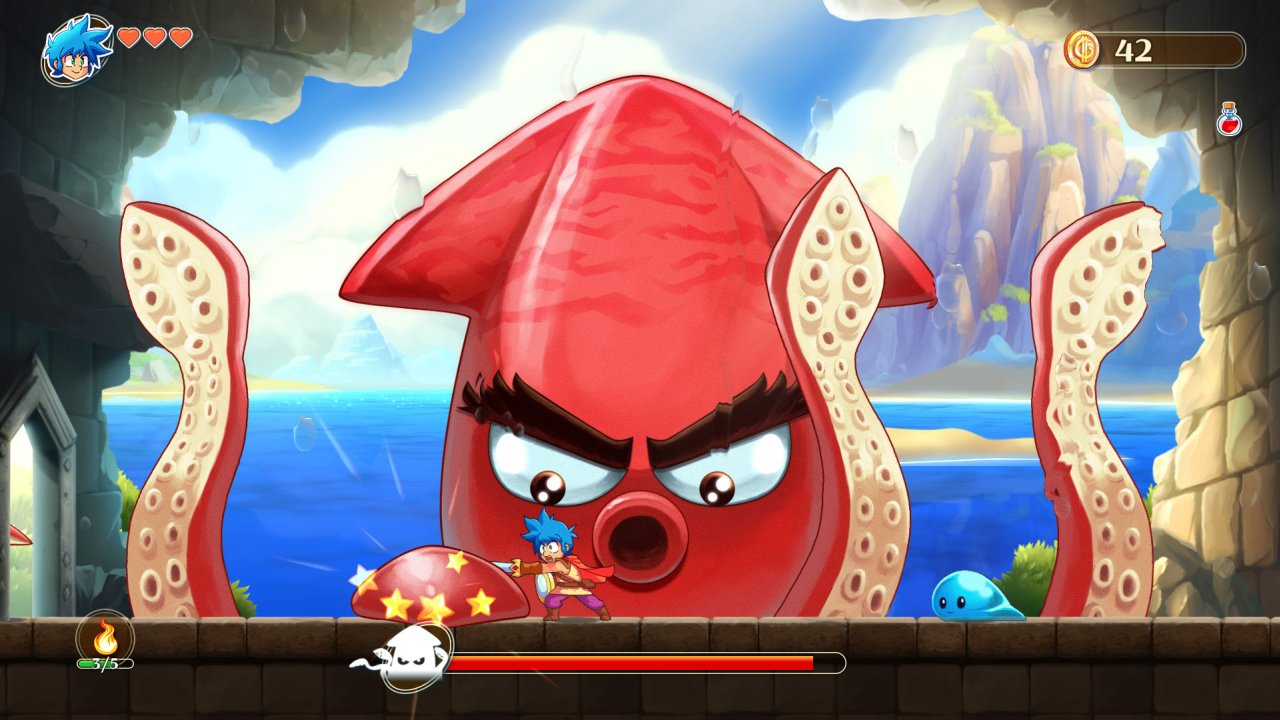 As mentioned, the game is pretty lengthy, depending on how much you set out to do. That’s a hefty amount of content for a platformer, for better or worse. While I don’t think the action of the game ever dips below being good, there are parts that could have been tightened up or shortened up. In particular, I feel that the game takes a bit of time to truly get going, with the early pig-only section being a slog. Despite his arsenal of spells, the pig was the least interesting animal for me to use, and it makes the first main world tough to deal with. Thankfully, things pick-up after the first major boss, but I can’t ignore the sluggish start the title has.

Going the hand-drawn route was clearly the correct call, as Monster Boy is one of the best looking 2D titles I have seen this generation. With a bright and colorful palette and impressive sprites, the look of the title really stands out. It’s animated beautifully as well, with each character looking gorgeous in motion. It’s chock full of little details that really help the world feel fleshed out and alive, even when it could have skated by without such depth. The soundtrack is almost as memorable as well. The music is consistently charming, whether you are sitting in the town hub or flailing at a puzzle. It pulls from the franchise’s past but makes sure to stand out by itself as well.

Even when considering how congested the 2D platformer genre is these days, Monster Boy and the Cursed Kingdom is on a level all its own. The gameplay is consistently creative, and excellent controls make even the tight window the title often calls for manageable. The immense playability of the game is only topped by the gorgeous hand-drawn visuals and ear-worm inducing soundtrack that surround it. Even with a basic story and slight pacing problems, Game Atelier’s effort is a beautiful tribute and revitalization of a classic series.

Our ratings for Monster Boy and the Cursed Kingdom on Switch out of 100 (Ratings FAQ)
Presentation
90
Fantastic hand-drawn visuals give Monster Boy a unique, exuberant personality. The catchy, up-beat soundtrack is an excellent companion to the colorful world of the game.
Gameplay
80
While some animal forms are definitely more enjoyable than others, the gameplay never stagnates too long on one form. The harsh challenge the game provides could be a roadblock for non-fans of the genre, however.
Single Player
70
It’s a testament to how strong and enjoyable Monster Boy is to play that the nothing storyline can largely be ignored. It would have been nice to have a tale worth paying attention to, but it’s easy enough to caught up in just enjoying the adventure.
Multiplayer
NR
None
Performance
90
No noticeable issues during my time with the title on the Nintendo Switch.
Overall
83
Both a faithful spiritual sequel and a fresh adventure, Monster Boy and the Cursed Kingdom is an excellent platformer with some truly gorgeous visuals.

Monster Boy and the Cursed Kingdom 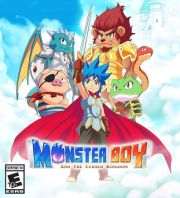 317. My Memory of Us
Switch
Related Games