Creepy visuals come at the expense of engaging core gameplay

The Inner Friend makes no secret of its influences. Playdead continues to be one of the frontrunners of visual storytelling in contemporary video gaming, and developer PLAYMIND looks to follow the studio’s familiar blend of streamlined control functions and striking visual imagery to deliver its own dark, psychological narrative. 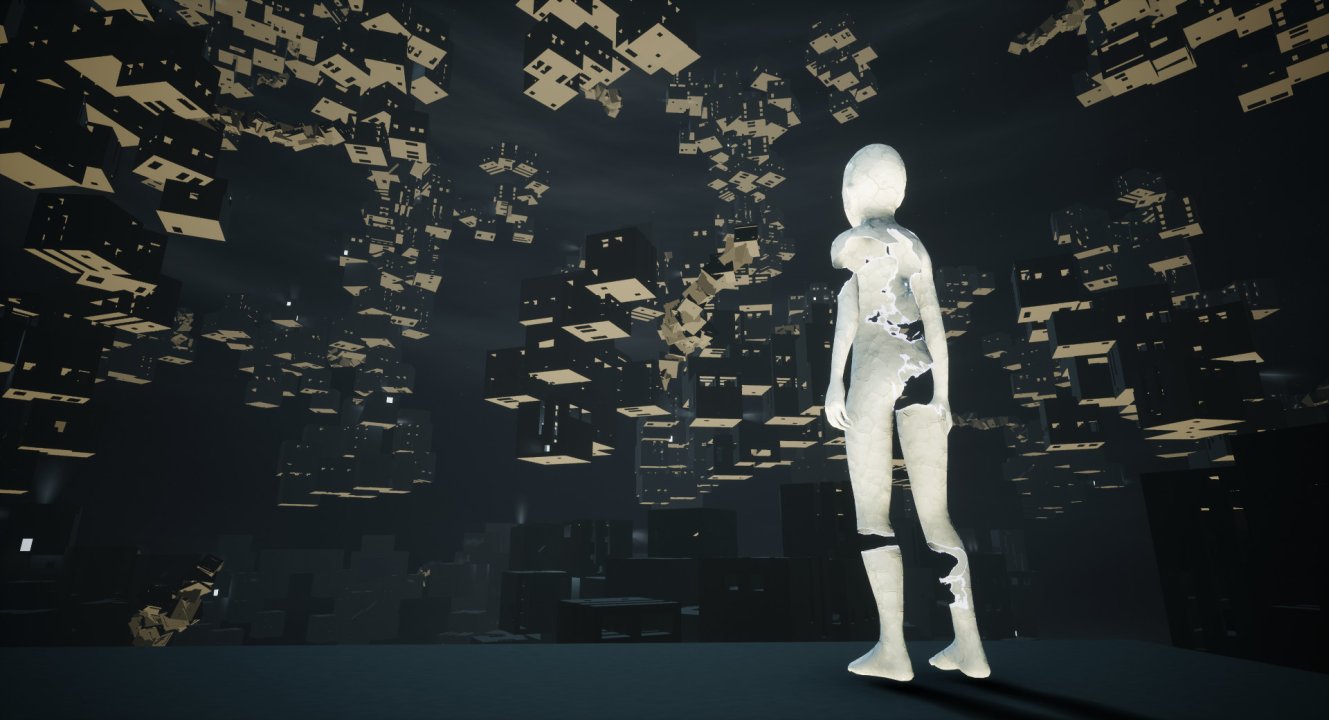 At least, it attempts to. The comparison with Playdead’s gorgeously twisted universe ultimately does The Inner Friend a disservice, for once the player delves into its attractively dark environments and weird tableaux, it’s striking just how empty and devoid of purpose this atmospheric puzzler is, compared to both Limbo and Inside.

The Inner Friend opens intriguingly, in a dilapidated old house, with a prompt inviting the player to float eerily toward a naked, faceless, convulsing body before breaking into their mind. Shocking, perplexing and enticingly downbeat with its muted red-grey palette, all fingers seem to point toward a world - if markedly less subtle - just as disturbing as that of the lovingly grim Inside.

It’s disappointing, then, to find that the main game takes place inside a banal, rather unfinished looking hub world filled with fragmented thought structures, through which the player – something resembling a fractured porcelain child - continually free falls in search of glowing memories. Once a memory is found, you jump into it, and are left to navigate particular portions of your host’s past via a series of constrained, rudimentary puzzles.

As the titular Inner Friend, the objective is to explore your host’s mind, witness his traumatic past, and help change his memories in attempt to rescue him from his dire present existence. Working your way through each remembered environment, you seek out the source of negativity infecting each memory, completing simple push-block challenges and timed evasion tasks to rescue ethereal versions of the young host. It’s a well-articulated, perfectly serviceable concept, but it unfortunately renders the core gameplay tediously repetitive.

Puzzles generally involve nudging school books across desks to obstruct strings of verbal abuse issuing from monstrous school teachers, or sidestepping security cameras in timed evasion sequences. As any good atmospheric puzzler will attest, simplicity isn’t the issue, but the lack of peril surrounding The Inner Friend’s static scenes. In their games, Playdead give purpose to every movement, while layering their peculiar psychological affect through striking visual cues. Here, the emphasis is on the cue, and with little visual storytelling and interaction to support it, The Inner Friend quickly finds itself struggling to build the suspense acclaimed in its influencers. 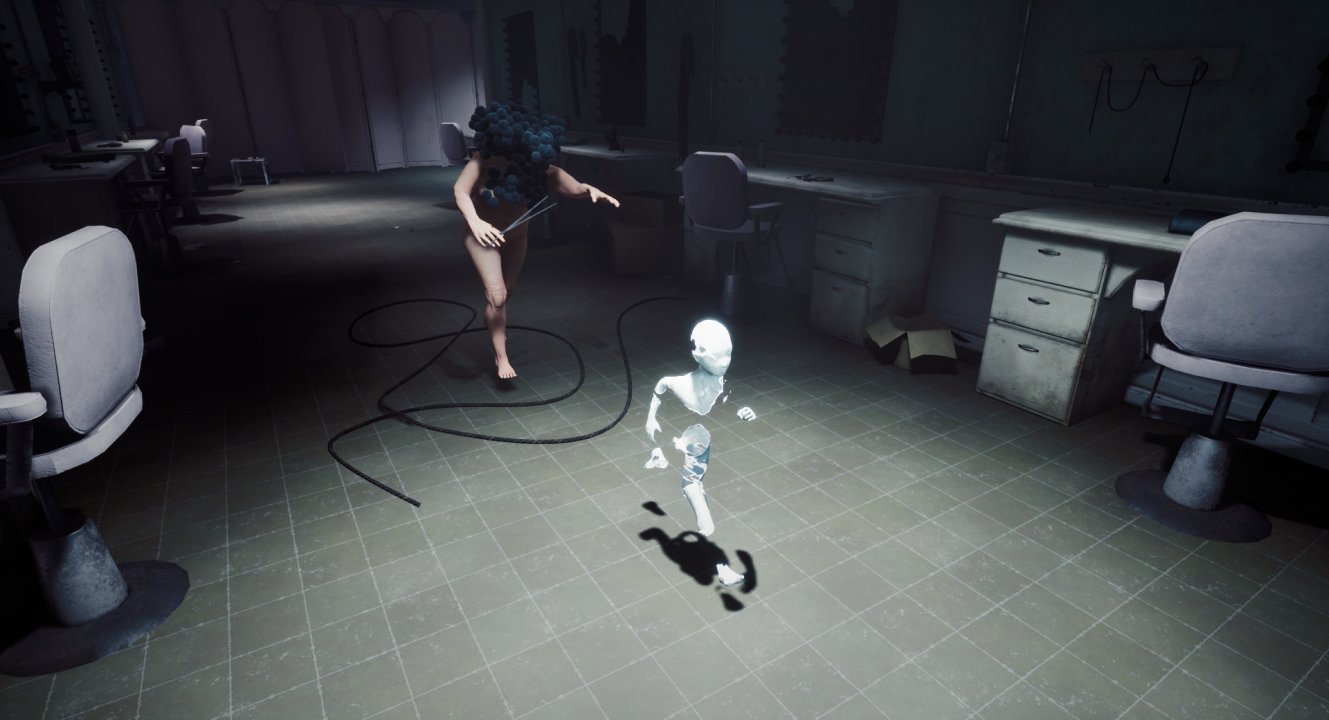 Getting caught out by a camera or crossing a monster’s line of sight will simply transport you back to the last checkpoint (which is never far thanks to almost constant autosaving), and too often lack the sense of impact needed to make actions feel purposeful. Together with the repetitive gameplay structure, this can render The Inner Friend’s core gameplay quickly tiresome.

This isn’t necessarily to say the imagery doesn’t work in its own right. Memories seem a bizarre fusion of postmodern surrealism and daily mundanity, splicing humdrum office environments with strange human hybrids to rival the creations of Toy Story’s Sid Phillips. But The Inner Friend seems so excited to plunge into the world of weird that it forgets to establish a sense of initial normality, which can leave the nightmare - albeit inventive - feeling confusing, as opposed to unsettling.

That excitement also comes at the expense of satisfying puzzle design. One scene offers a polished tribute to the final scene of 2001: A Space Odyssey as if that’d be enough to make for a chilling early chapter, before unravelling into a mundane security camera side-stepping puzzle in attempt to work it into something purposeful.

It’s unfortunate, because The Inner Friend is far from poor. There’s ample and effective use of sound and lighting techniques to create an unsettling atmosphere, with some moments nudging toward the darker aspects of Gone Home, others managing to conceal their horrific inhabitants in just the right amount of darkness to tickle the imagination. A standout chase sequence involves the player navigating a run-down studio complex to escape a disfigured, scissor-wielding giant, while the soundtrack’s moaning bass heightens the anticipation of inevitably being faced with their destroyer.

But largely (and frustratingly, given these constant glimmers of promise), The Inner Friend feels much like walking through a haunted house. Sudden breakages and freeze-frame-style scenes lay waiting to freak you out in partially lit hallways, and though adequately designed, they lack the sense of threat to truly frighten. Where Limbo and Inside made stellar use of heavy controls, deftly timed chases and one-hit kill systems to affect a sense of constant risk, monsters in The Inner Friend more often wait for the player to come to them, before shrugging and going back to their business once they’ve passed. 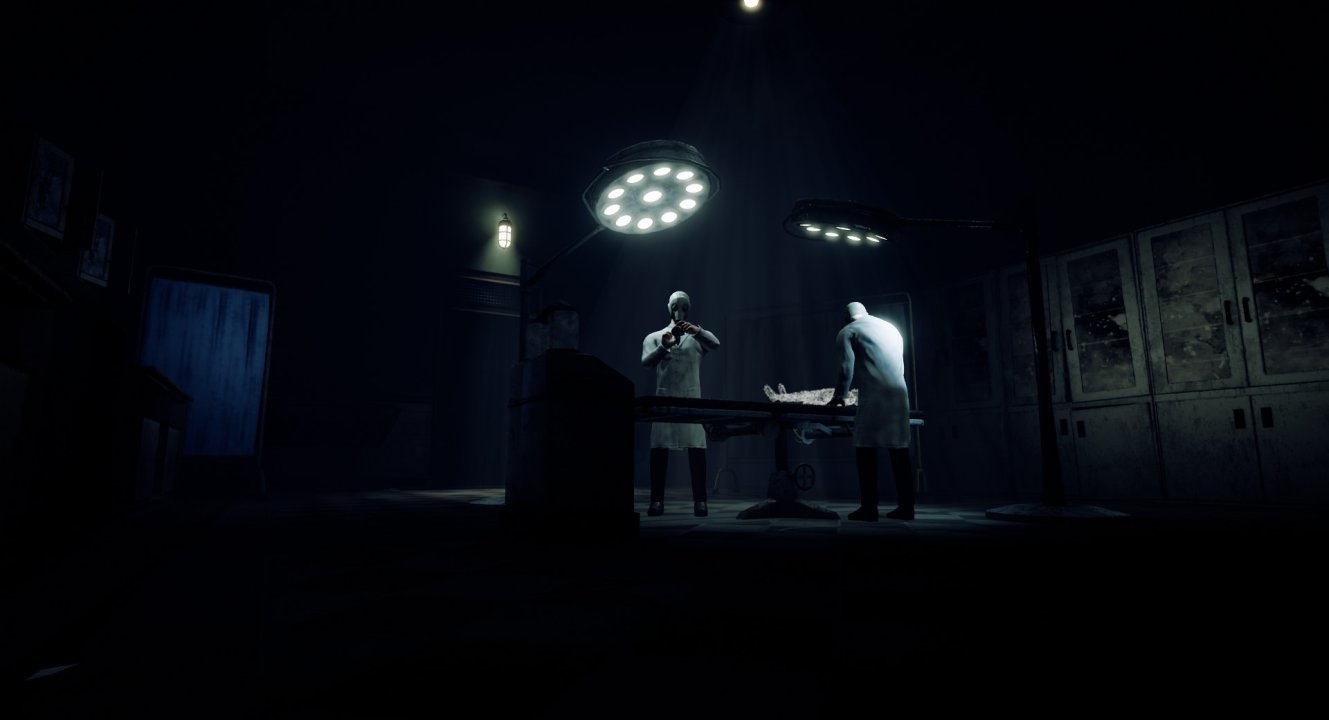 It’s very clear what The Inner Friend tries to instil in its audience. It appears to want to work on the imagination; to use shadow play and atmospheric sound to heighten the sense of unease buried in its uncanny set pieces. But rather than acting to emphasise the danger and risk communicated so well through Inside and Limbo’s brutal one-hit-killers, environments and enemies in The Inner Friend stand as creepy exhibits devoid of any real danger, while a tedious puzzle structure only robs it further of the eeriness its concept deserves.

Our ratings for The Inner Friend on PC out of 100 (Ratings FAQ)
Presentation
70
Evoking the lovingly grim world of Inside, The Inner Friend combines dulled reds and oppressive greys to create a thoroughly downtrodden memorial past; an effect needlessly numbed by an overreliance on familiar imagery and a lack of interactive purpose.
Gameplay
59
Simplicity isn’t so much the issue here as an over-reliance upon visual imagery. Too often lacking purpose, The Inner Friend’s push-block-style tasks and evasion sequences can quickly become tedious, to the detriment of atmosphere.
Single Player
60
Though its static images and tableaux nudge toward the creepy, distorted designs of Playdead’s Inside, The Inner Friend pulls itself down with repetitive puzzle designs and encounters that lack a sense of threat.
Multiplayer
NR
None
Performance
(Show PC Specs)
CPU: Intel Core i7-4710HQ @ 2.5ghz
GPU: Nvidia GeForce GTX 860M
RAM: 8GB
OS: Windows 10 64 bit

68
More often than not, The Inner Friend runs reasonably well on systems that match the minimum requirements, with a few minor framerate dips. This said, an occasional bug may send your protagonist clipping through the floor, which’ll most often be remedied upon restarting the game.
Overall
61
The Inner Friend was in much need of adding risk to its puzzles and encounters, if it hoped to create the eerie, unsettling atmosphere of which its subject matter and visual design are more than capable.