The Path of Motus Review

Clunky controls, yet interesting commentary fork the path for this quaint adventure puzzler

The Path of Motus feels like a game in two parts. On the one hand, you have a rather rudimentary platforming affair whose novel aspects find themselves continually undermined by ponderous controls and banal dialogue. On the other, you have a surprising subversion of traditional game mechanics, told through cleverly-placed visual cues, complex puzzles and an enduring tonal warmth. 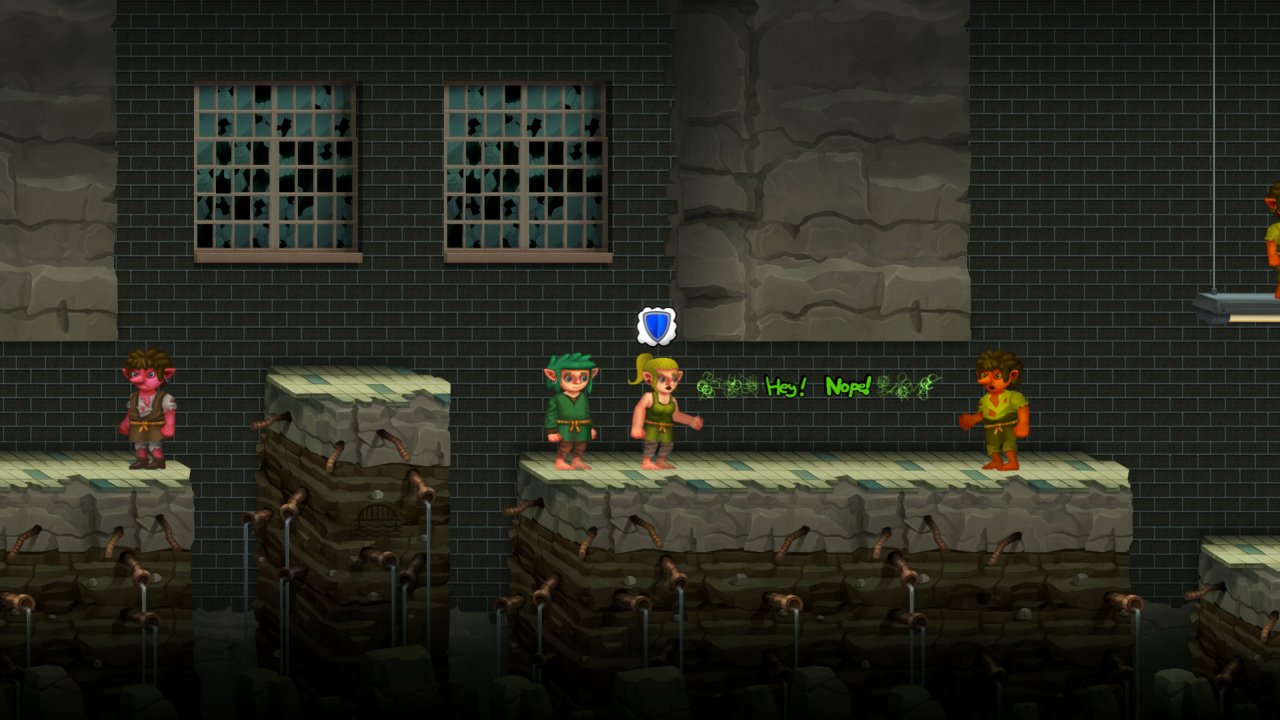 But what is perhaps most baffling about this second game from Pillar developer, Michael Hicks, is that it requires the initial clash with patchy combat and slippery platforming to get the game’s point; a requirement that may sadly lead The Path of Motus to be dropped before it gets a chance to make its argument.

You are the titular Motus: a grassy-haired goblin child with a vivid imagination. Eager to escape the enchanted forest that has contained his people for centuries, he’s bequeathed a set of art supplies by his late father, which are imbued with magical properties that bring drawings to life. Sensing an opportunity, Motus uses his new toys to craft bridges to overcome the forest’s entrapping barricades, sending the protagonist on a quest to explore the freedoms and dangers beyond the woodland.

From the slightly floppy character animations to the uplifting, sunshiney atmosphere, Drawn to Life seems to have inspired The Path of Motus in terms of concept and tone, albeit considerably adapted to produce a much simpler side-scrolling platformer. Equipped with his father’s treasured art brush, you guide Motus through haunted woodlands, enchanted grottos and perplexing caves with the A and D keys, using his artistic flair to overcome environmental obstacles and nasty goblin bullies.

There’s also the familiar ability to ‘paint’ your way through pitfalls and barricades to keep your protagonist moving forward, but the style is entirely different. Though still allowing the player to traverse environmental obstacles by ‘drawing’ bridges and other structures, these segments are closer to the structural puzzles of Flow than the more cosmetic opportunities in Drawn to Life. 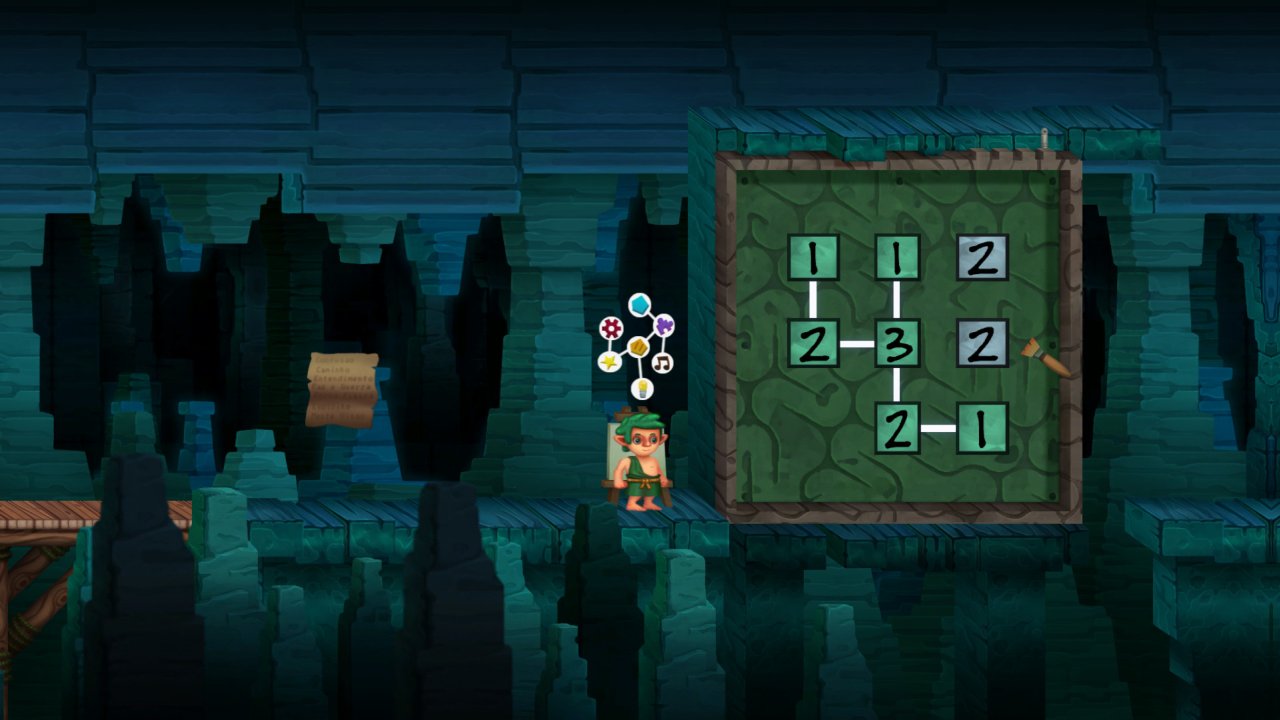 Paintings are comprised of individual blocks called ‘nodes’, each of which requires a certain amount of connections to other nodes in order for Motus’ creation to be brought to life. Connections are made by drawing lines between nodes, thus requiring the player to find the correct pattern in which all nodes are satisfied for the structure to be completed. As one might expect, these puzzles become more complex the further Motus progresses, with structures comprised of more nodes requiring a more intricate web of connections.

This said, it’s a comparison that ultimately works to the game’s detriment. While the driving premise is a fair coming-of-age tale about gaining self-confidence through creativity, the charm somewhat expires beneath run-of-the-mill interactions and half-hearted exchanges, at points comparing more to the interactive geometry games that did their rounds in schools in the early 2000’s, than the fun-loving innocence of the underrated THQ series.

Though perfectly competent and frequently satisfying, the paint-by-numbers approach initially jars against the wider themes of freedom and creativity. The opening would’ve been greatly supported by an interesting narrative, but tutorial tends to override emotional investment, with characters carrying little purpose aside from offering puzzle hints or introducing new mechanics.

There are multiple attempts to spice up the puzzling with focused, speed-based platforming sequences; attempts that could very well be effective with some technical fine tuning. Movement is rather ponderous, and delayed enough to render jumping wooden, which distracts from the more refreshing elements these sequences strive to include. In a novel spin (yet suitably fairy-like) on traditional combat, Motus uses words to conquer opponents as opposed to conventional weapons. Similar to (but emphatically not) the Oddworld games, you select between three ‘shouts’ (a ‘hey’, a ‘yeah!’ and a ‘why?’) that must match enemy commands in order to vaporize them. Occasionally, you’ll be faced with opponents with wider vocabularies, with whom you’ll need to experiment before finding the right commands to turn them to word porridge. Some of the later stages become engrossingly skill-oriented, requiring the player to dual several enemies (or even manage newly-introduced characters) at once while navigating falling platforms and other fatal obstacles. 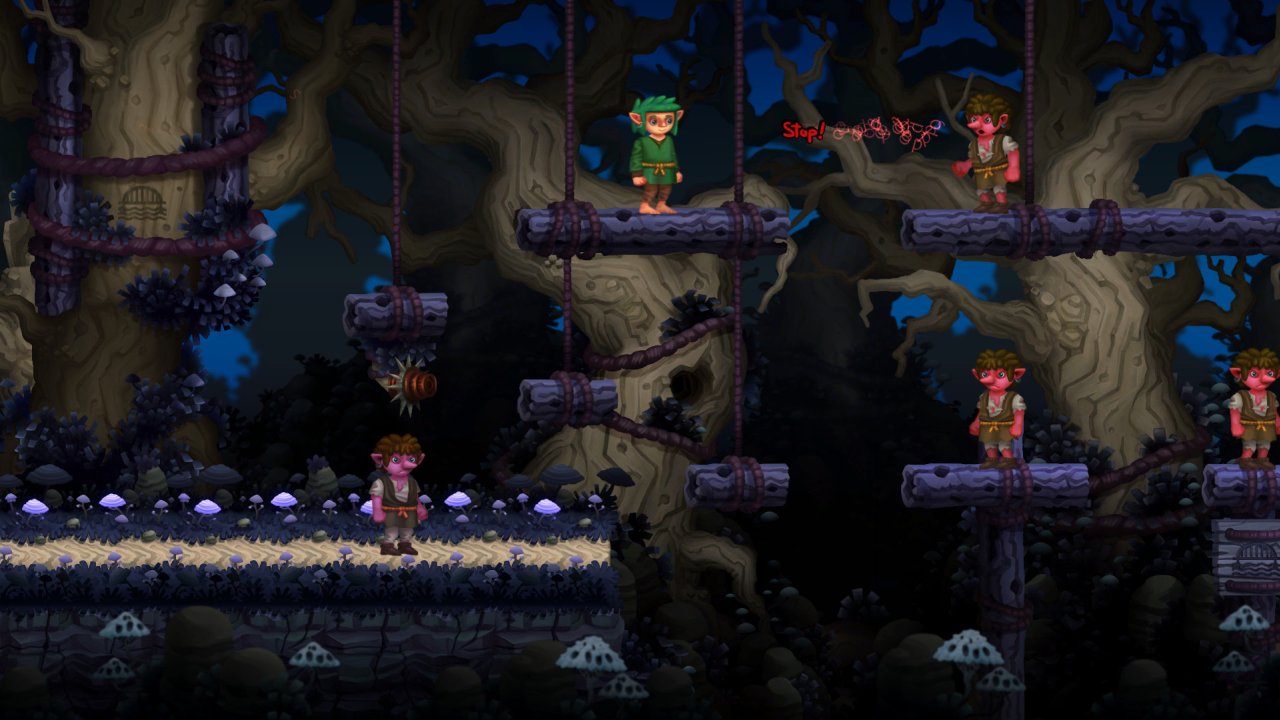 Yet, controls frequently lack the finesse to alternate rapidly between shouts while moving swiftly. More often, platforming gives way to frantic keyboard scrabbling while the protagonist leadenly plops to his death. I’ll leave you to imagine which of the three shouts proved most popular at the end of Motus’ bitesize campaign.

It is only really after the first act that things really begin to change. The regimented structural puzzles give way to ‘Thought Doors’, which require you to convey what Motus is currently feeling. More than just a refreshing break from troublesome combat, these puzzles emphasise the neutral tone running throughout the entire game, reminding that there are other, often preferable ways of dealing with enemies without bashing them with your words.

In a medium whose prime MO continues to be kill-kill-kill, evasion is a perfectly welcome route to take, and admittedly renders the game more palatable by turning it into a kind of navigational puzzler. But while games such as Undertale punished violent action with gruelling (but adroit) battles, The Path of Motus discourages violence through flawed design and clunky controls. For that reason, dropping the offensive is more likely to result from exasperation, than a conscious decision to take a more humane route.

I can’t help but feel The Path of Motus could’ve benefitted from a stronger opening. Between humdrum characters and the noticeably leaden movements, The Path of Motus doesn’t offer much incentive to stick with those hitches to arrive at its core message. Perhaps it’s in need of the sort of suspense observed instantly in Undertale (and a little technical tweaking), but at present the main question that should be asked is if it’s worth enduring its flaws if they’ve a noble intent.

Our ratings for The Path of Motus on PC out of 100 (Ratings FAQ)
Presentation
70
A charming combination of Drawn to Life floppiness and classic folk fantasy, The Path of Motus overlooks the sorts of places my grandmother’s garden gnomes may well disappear every night, and in the most endearing of ways.
Gameplay
68
The node puzzles forming the game’s core are satisfyingly complex, but between the lacklustre storytelling and restrictive, rudimentary platforming, they’re more enjoyable as isolate puzzles, than as vital story components.
Single Player
63
Admirable in concept, Hicks attempts to use flawed mechanical design to articulate a wider message about the use of violence in the video game format, but evading enemies will be more likely due to frustration, than a conscious moral decision.
Multiplayer
NR
None
Performance
(Show PC Specs)
CPU: Intel Core i7-4710HQ @ 2.5ghz
GPU: Nvidia GeForce GTX 860M
RAM: 8GB
OS: Windows 10 64 bit

59
There are currently a few hiccups on the PC, with simple movements jittering slightly against the pleasant garden gnome aesthetic. Platforming is serviceable, but jumps too often feel rigid.
Overall
60
The Path of Motus is ambitious in what it seeks to communicate about the relationship we often share with games, and includes several notable spins on traditional gaming components of the puzzle platforming genre. But its arguments need to be embedded within a more rigorous gameplay structure if they're to truly land.

The Path of Motus 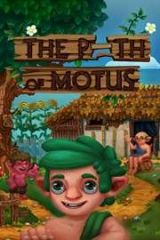