Inked experiences that ironic situation in which the 'presence of the artist' ultimately hinders the game's 'artiness'. In a story about using the creative medium to accept help and overcome grief, I suppose we can argue about whether that was intentional, but I'd be satisfied if that was the prevailing message after the ghostly, 4-hour adventure puzzler concluded. 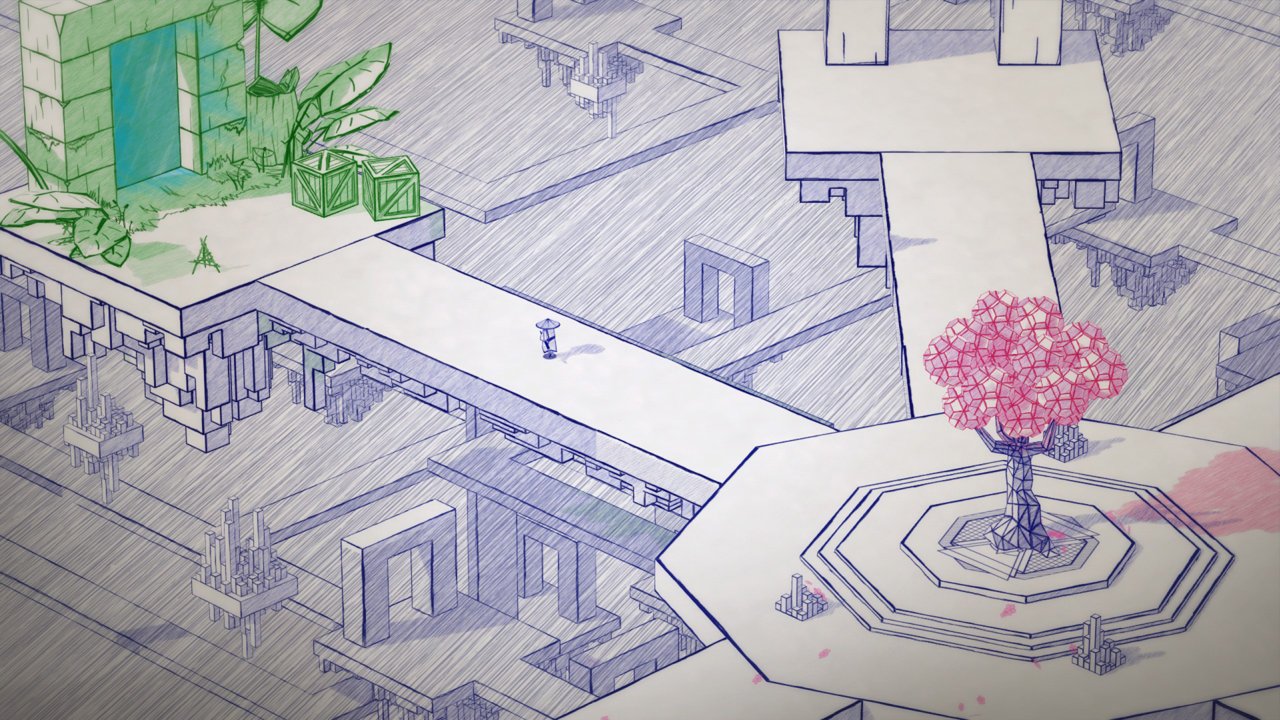 As it happened, what could've made an atmospheric, ghostly tale about grief and turmoil reminiscent of Hyper Light Drifter, finds itself pulled down by an insistence upon wider allegory and unremarkable gameplay.

The tale of Inked is straightforward; almost fable-like with its themes around lost love and spiritual battle. The player controls a silent, robed protagonist known only as 'Nameless Hero', who journeys throughout a mysterious realm after becoming separated from his true love. The hand-drawn landscape is rendered beautifully in the style of a Japanese scroll, though inspiration from Monument Valley can be seen in the geometrically-styled towers and strange, cone-headed bird creatures that lay caged for the protagonist to free.

It quickly becomes apparent, however, that the story of Nameless Hero is actually that of Adam Woodhouse: the award-winning, but frustrated comic book artist behind the protagonist's creation. From the newspaper cuttings and voice-overs that haunt Nameless Hero's path, it's obvious that Adam has experienced a tragic loss, and so the protagonist's adventure becomes a metaphor for Adam's emotional turmoil.

Inked is at its strongest when this storybook quality is drawn from scenery alone. Somnium Games uses imagery in ways comparable to Playdead Studios, using symbols that merely allude to deeper, darker meanings. Mysterious handprints mark doors and walls, and the player will occasionally find themselves wandering across disquietingly 'ink' spattered floors. The rise in tension is subtle, but like Limbo and Inside, it's undeniably intriguing. 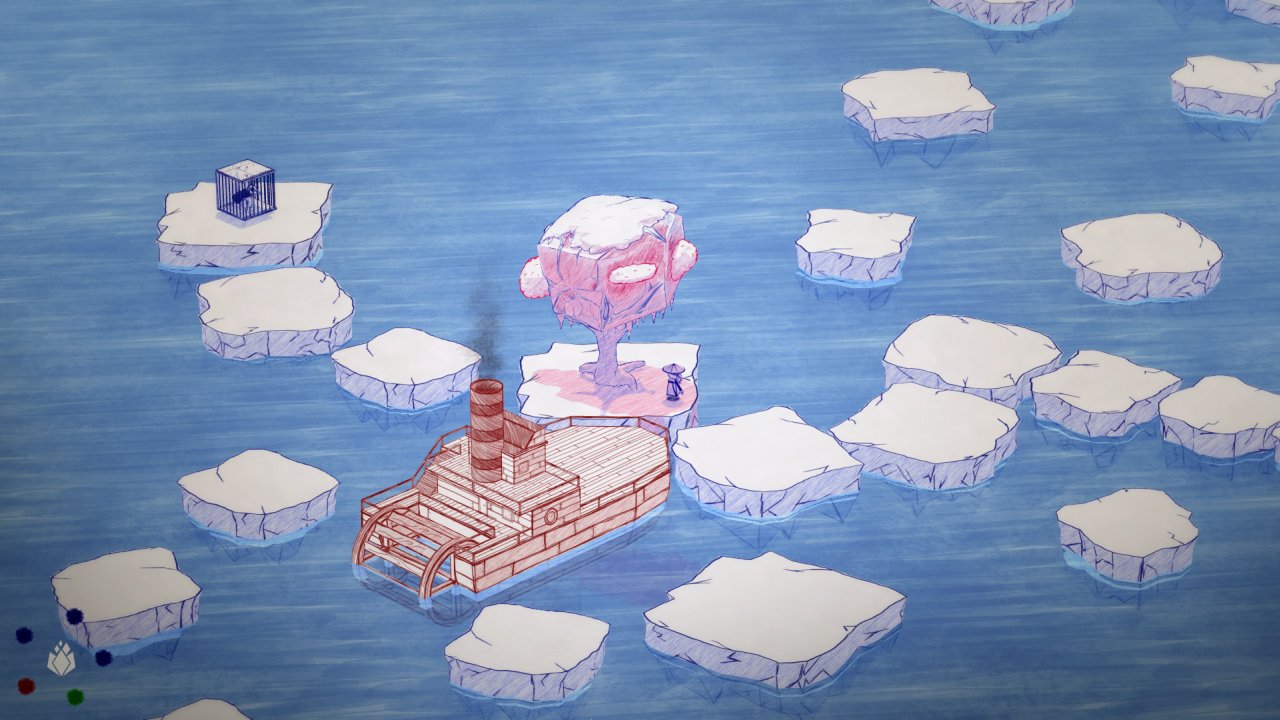 It's a shame, then, that the sense of unnerve is rarely given the chance to make an impression. As soon as the tension begins to mount, the player is jerked uncomfortably into the office of Adam Woodhouse, pummelling the ghostly unease with disorientingly flat, 3D rendering. The fascination with authorial control often bleeds into the gameplay; as Nameless Hero interacts with ancient technologies and inquisitive, silent wanderers, Adam will sometimes describe the hero's motivations and efforts a la Bastion. But where Bastion's witty narrator tapped amusingly at traditional game design through playful jabs at the player's mistakes, Adam is a touch more tyrannical, content to describe the hero's actions before leaving him to carry them out.

To the game's credit, there are instances in which Nameless Hero is invited to go against his master's wishes (and the interruptions do begin to hold off toward the later stages), but Inked would've felt more cohesive (not to mention satisfying) if the conflict between creator and creation had built into a more significant climax. Instead, as much as Adam's narration keeps the story progressing consistently, they tend to deprive the player of the satisfaction that should come from finding solutions independently.

For that reason, Inked leans more toward story driven adventure game than 'puzzle game'. The challenges with which Nameless Hero is faced are identified early on as manifestations of Adam's personal struggles, and so act more as interactive segues between story beats. Puzzles tend to revolve around the push-block challenges forming the bedrock of RPG puzzling, or turning gears to temporarily open doors to reach the next portal. The self-reflexive bent is actually rather well-suited to the puzzle solving; using the artist's pen, the player can make changes to the terrain, selecting from a geometrical wheel to draw bridges or blocks to carry Nameless Hero to the next portal. The range of shapes you can create increases as your journey progresses, and despite the wonky jump controls, the pen becomes truly satisfying towards more complex stages. 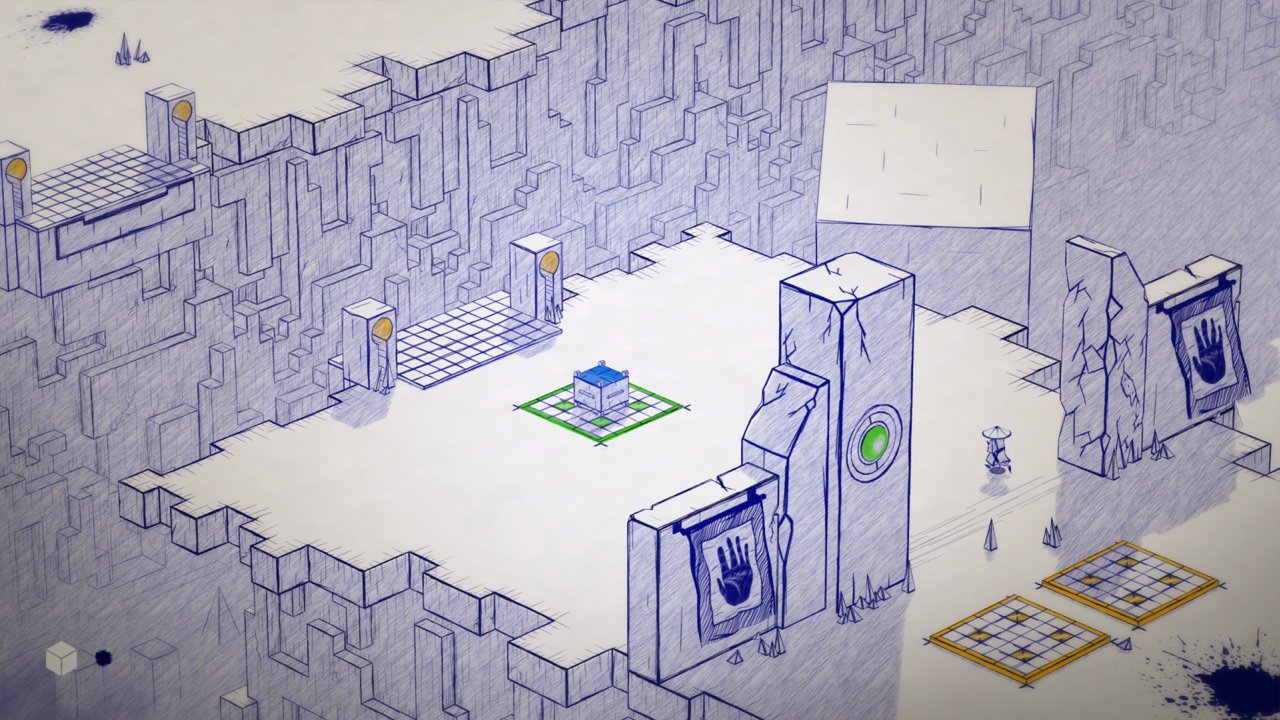 It's oftentimes the controls that let the gameplay down, however. Movement feels stilted and oddly grid-like, which can turn simple tasks into laborious frustration fests. Jumping is equally ponderous, with the protagonist repeatedly hopping between platforms to his wordless death; a frustration punctured by the generous save points, but never really curbed.

If I sound like I'm wavering, you're not all wrong. In truth, I can't decide whether or not I'd actually prefer Inked to be frustrating, because without the occasional desk-thump over failed leaps, I fear my feelings on the entire thing would be virtually non-existent. It's not really a case of obtuseness; the themes, messages, even Adam's character development are perfectly clear. But much like Nameless Hero, they tend to waver in the mist until it's time for the credits to roll. Though not without its moments (there are a handful of refreshing sequences in which author and creation come toe-to-toe), Inked struggles to create real emotional resonance, which as a game centred on its narrator's mindset makes the rather plain gameplay beneath only more glaring.

Our ratings for Inked on PC out of 100 (Ratings FAQ)
Presentation
78
Falling somewhere between ancient scroll and ball-pointed comic book, Inked's elusive civilisation recalls the geometric designs of Monument Valley in monochromatic, beautifully simplistic ink sketches.
Gameplay
63
The artist’s pen is a welcome novelty, and puzzles are made instantly accessible by the game's minimalist, uncluttered design. But alas, it's let down by unresponsive jumping and stilted movement.
Single Player
60
More story-driven adventure than challenging puzzler, Inked is strongest when it allows its themes of grief and creation to surface naturally through visual imagery. But as soon as it collides the world of the artist with the hand-drawn construct, the subtle intrigue is somewhat trampled.
Multiplayer
NR
None
Performance
(Show PC Specs)
CPU: Intel Core i7-4710HQ @ 2.5ghz
GPU: Nvidia GeForce GTX 860M
RAM: 8GB
OS: Windows 10 64 bit

62
Inked will run satisfactorily on most average systems, though isn’t impervious to framerate dips during some set pieces.
Overall
60
Inked tries in earnest to make a small folk tale into a wider allegory about creative expression, and though admirable in theory, the self-reflexive bent ultimately hinders the sense of unease it creates through its pleasantly hand-drawn realm. 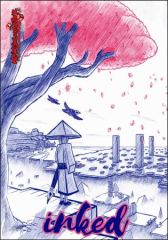 Our Review of Inked
60%
Adequate
The Verdict:
"A forlorn tale of grief punctured by self-reflexivity and unengaging gameplay"
Game Ranking
Inked is ranked #1366 out of 1581 total reviewed games. It is ranked #126 out of 148 games reviewed in 2018.
1365. Team Sonic Racing
PlayStation 4
1366. Inked