For a game named like a pop-up children’s restaurant, Jumping Joe and Friends is unexpectedly rife with tension. Of course, I don’t speak of nerve-tickling death traps or enemy hordes. No, if anything, Joe feels like a constantly-paced Temple Run, with its endless design and simple, left-or-right direction. But as I hopped my way through Joe’s cute, vertically-scrolling world, I began to question just how long it’d be until my reflexes inevitably betrayed me. And when they did, I could but laugh. 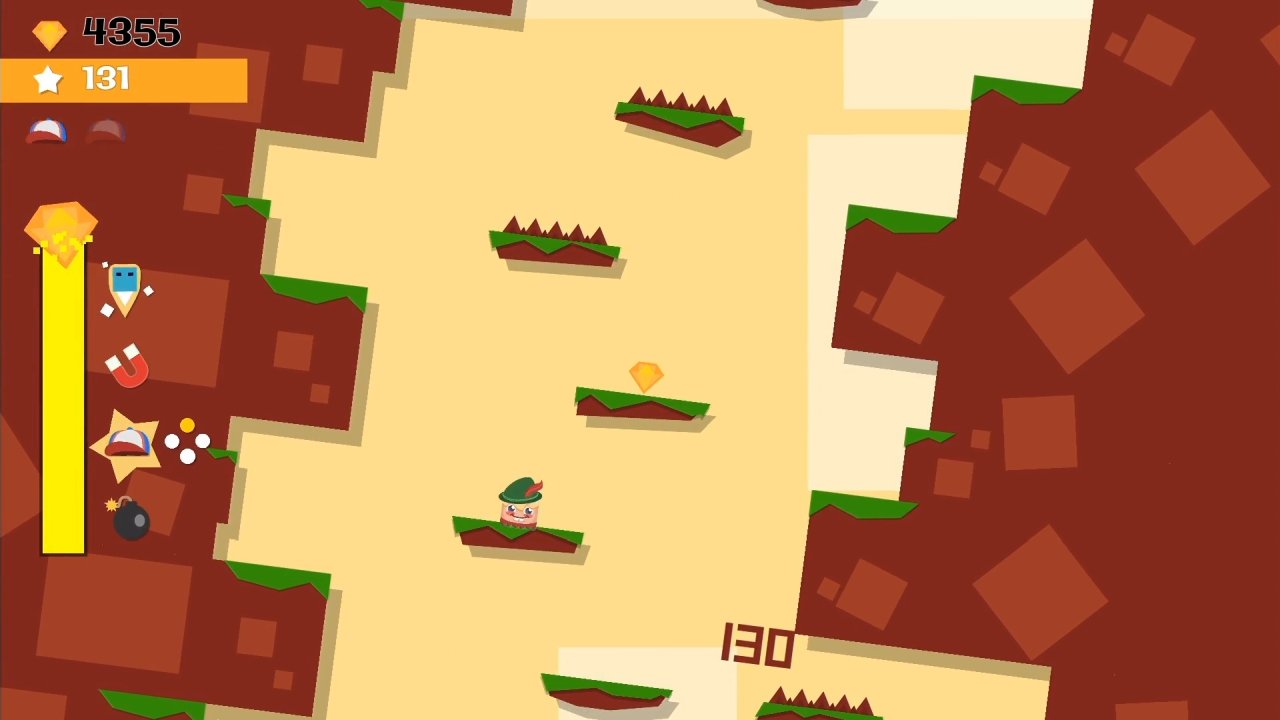 You play as the eponymous Joe: just your average, baseball-capped square dude, destined to hop continually upward to an uncertain fate. I’d draw a life metaphor, but thankfully this isn’t that kind of game.

The default single-player is the Arcade Mode, in which the aim is to continue Joe’s upward climb as far as possible, collecting jewels along the way. Each level is set in a ravine between two cave walls, with numerous, procedurally-generated platforms. Using the shoulder buttons on the Switch’s Joy-Cons (both sets work equally), the object is to keep Joe progressing ever upward through the ravine, hopping either left or right, ensuring you’re quick enough to avoid a rising tide of lava that’ll vaporize you if you’re too slow.

The difficulty level steadily climbs as the player does, requiring punchy reflexes, timing and awareness to keep Joe unscathed. Some platforms will be booby-trapped with vanishing spikes, or populated by bats or other beasties. While the lava is a one-hit-killer, spikes or enemies will cause Joe damage (or more precisely, his lovely baseball cap), before killing him with the next collision. 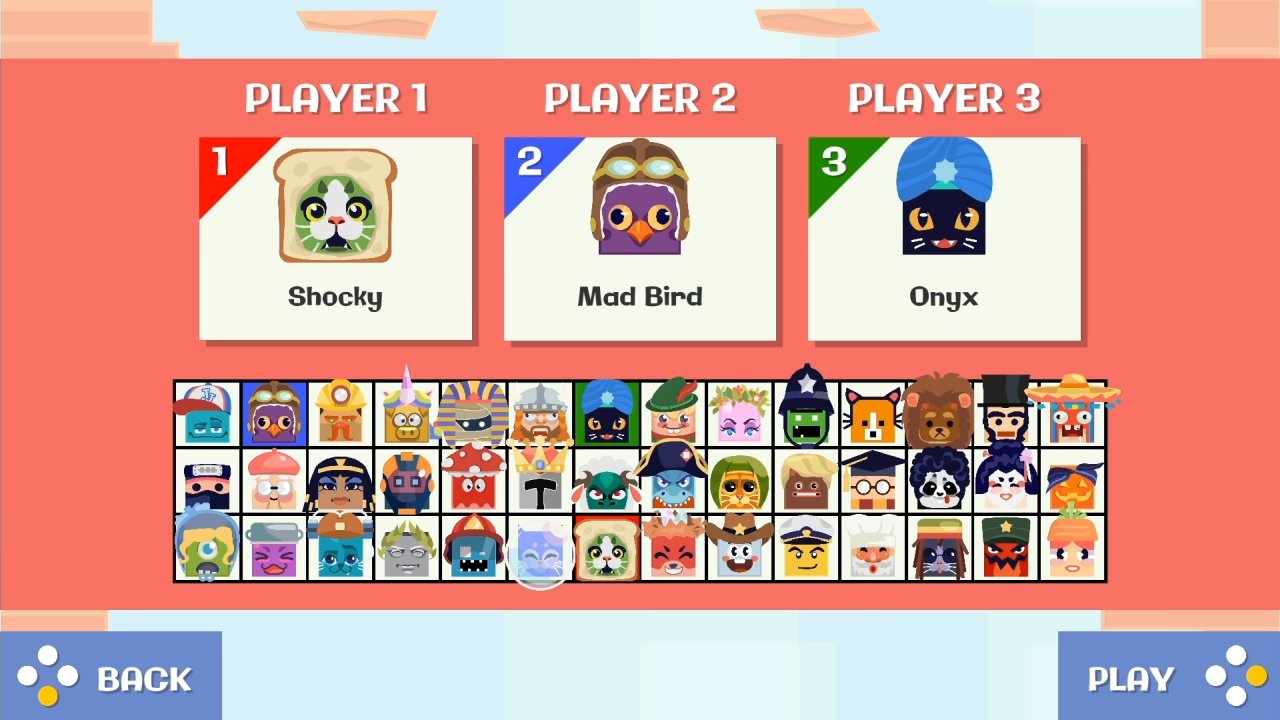 Several pickups lay there to collect on the way, such as moneybags (which’ll temporarily increase the number of jewels that occur within the level), and crates that provide Joe with an extra life.

Judging from visuals alone, Jumping Joe looks as if it’d control rather stiffly, but the straightforward controls are a large part of what makes the game so challenging. Each of Joe’s movements carry the same distance, and he can’t be steered mid-leap. While remarkably simple in theory, it requires you to remain aware of which platforms can (and cannot) be reached, and hanging a right where no platform exists will send Joe spiralling - yet incurably smiling - down to his quadrilateral death. That’ll happen, by the way, and like the once-notorious Temple Run, the tension of Jumping Joe is in wondering just when that time will come. After your reflexes inevitably betray you, a random generator provides you with a bonus, such as getting a head start in your next playthrough, or starting you off with two extra lives. You’re always taken right back into the action to try again, however, so each failure only really leaves you enough time to have a chuckle over how idiotic your left thumb just was. 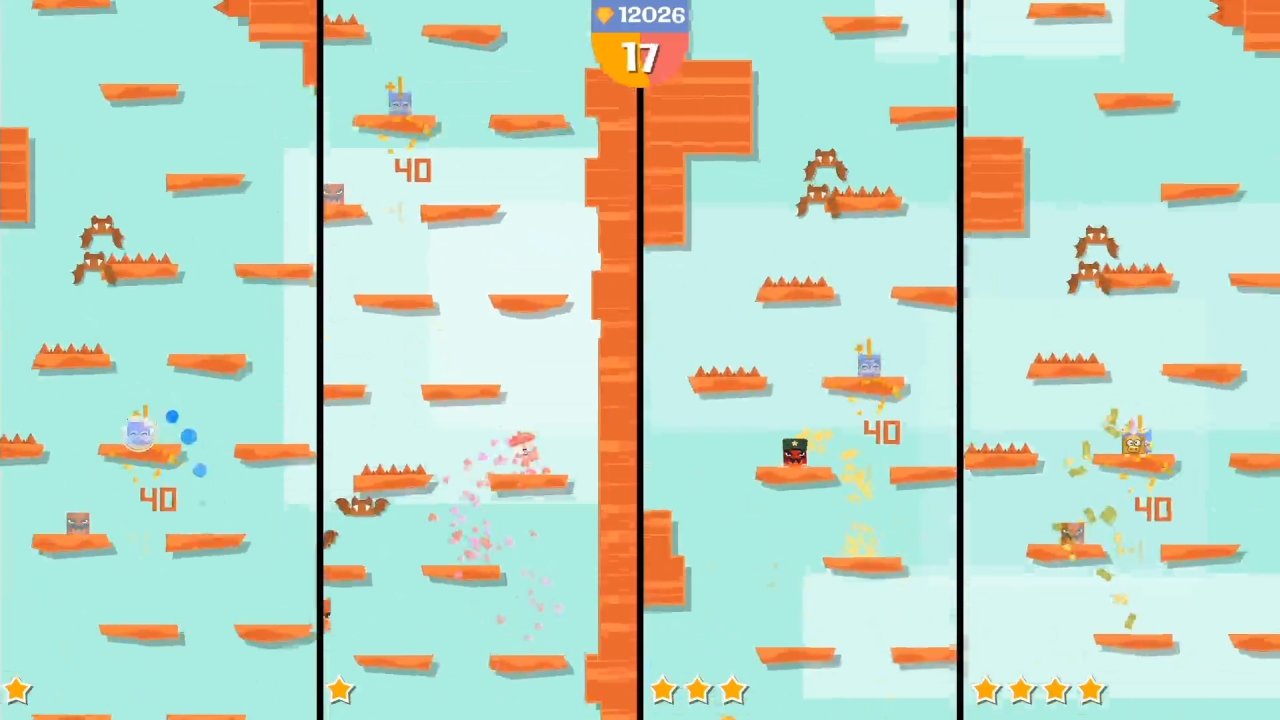 There’s also strong time element: while in arcade mode, you only need to be quicker than the tide of lava rising beneath you - you’ll need to accumulate a certain number of points in specific timeframes to unlock the Hero and Racing Modes. Especially with Racing Mode, this strikes as a way to assuage potential frustration (requiring the player to prove they can handle pacier layouts before letting them run - climb? - wild), though players who prefer a steadier tempo may find being locked out of Hero Mode somewhat exclusive. Both modes do remain unlockable for a significant amount of in-game diamonds, however. It’ll just take significantly more time.

The jewels you accumulate across levels can be used to buy extra lives or upgrade Joe, or opt to play as one of his seven quadrilateral companions. Where Temple Run (even the fairly recent Super Mario Run) left something to be desired from alternate characters, Joe’s seven quadrilateral companions are diverse enough to keep jewel-hunting purposeful, and each have their own advantages; from a golden money-pig with the ability to attract score-boosting diamonds, to a buck-toothed builder, whose angry outbursts temporarily obliterate all nearby hazards. It’s all lovably ridiculous, but I’d be lying if I said I wasn’t tingling slightly upon unlocking the ‘Bread of Protection’. 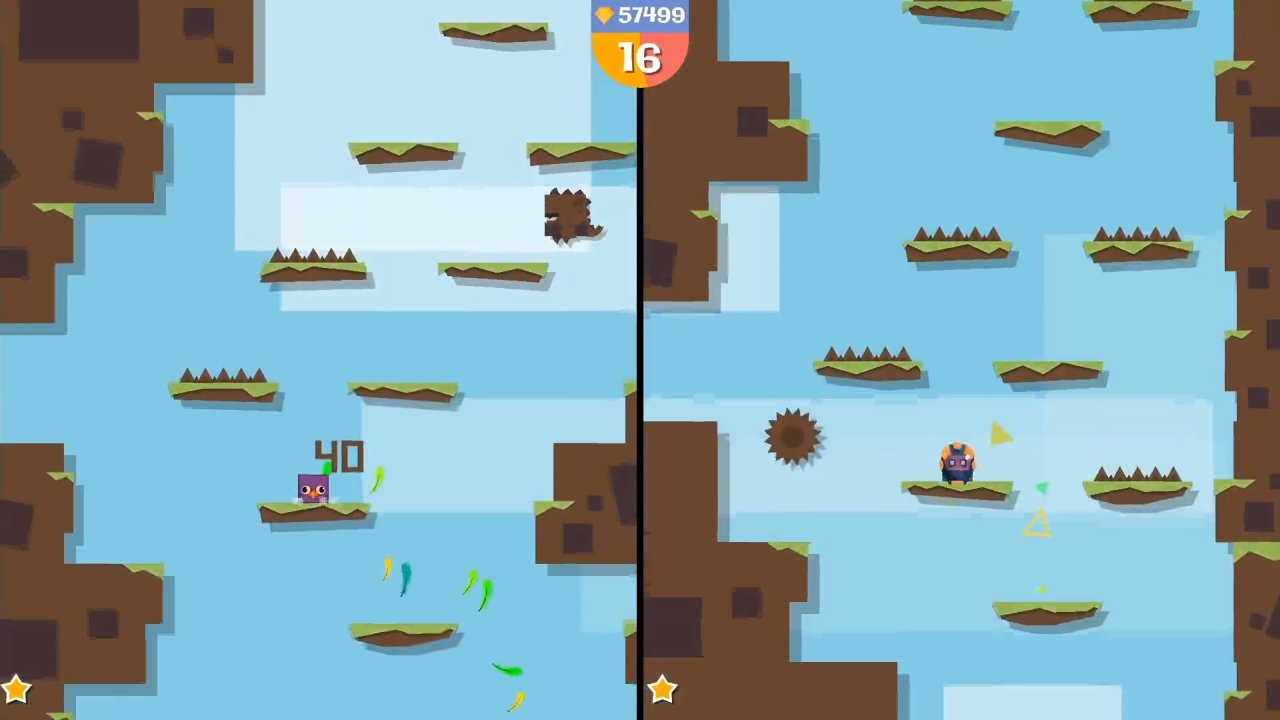 With its high replayability and silly, offbeat tone, it’s really no surprise that Jumping Joe and Friends includes a local multiplayer mode, and even less surprising that it suits the Switch’s pick-up-and-play inclination. Supporting up to four players, Joe lets you race your cubic buddies to the top of a level, affording an additional tension to the standard arcade format by requiring both speed and awareness. While it’s undeniable fun, rounds quickly become repetitive, and it’s difficult to see them lasting long at smaller scale gatherings. That said, it’s an effective party piece; just make sure you’ve some extra Joy Cons on hand.

Jumping Joe and Friends quickly convinced me that I’m about as responsive as a seventy-three-year-old cat. But unlike the increasingly-speedy Temple Run, Joe’s steady pace and predictable level design requires unwaning vigilance, and in so doing creates its very own – very appealing - brand of tension. Thanks to its cute, straightforward design and arcade format, Joe nestles comfortably between charming timewaster and arcade thrill; both instantly accessible and addictingly un-put-downable.

Our ratings for Jumping Joe & Friends on Switch out of 100 (Ratings FAQ)
Presentation
75
Joe’s world of boldly-coloured squares carries a vague resemblance to Super Meat Boy, but makes use of goofy animations and comically-cute character designs to prioritise its own amusing quirkiness.
Gameplay
78
Possessing a simple, left-or-right control style and consistently-paced level design, Joe proves instantly accessible, yet surprisingly addictive.
Single Player
76
Like Temple Run, the default mode grows steadily tenser with each high score you draw, with enough unlockable fare to keep the central object of acquiring in-game jewels purposeful.
Multiplayer
70
Supporting up to four players, multiplayer makes a fun, competitive romp, but could have included some additional multiplayer modes, alongside the standard ‘race to the top’. Best suited to party environments and large groups.
Performance
90
Joe plays smoothly across both single and multiplayer, and additional Joy Cons were easily connected in party mode.
Overall
75
Jumping Joe and Friends embraces simplicity, requiring enduring vigilance as it challenges the player to accumulate as many points as possible. The result? Not only a tense arcade platformer, but a reasonable party game that suits the Switch’s pick-up-and-play charm. 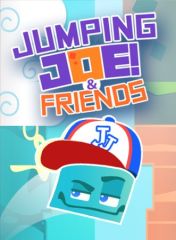