It's fun clawing through cy-purr-space

Copy Kitty is the first game from indie newcomer, Nuclear Strawberry, and though it might not carry an appeal as widespread as the apparently beloved NES throwback, its grungy, SNES-like visuals and accessible style nevertheless help define a strong debut.

You play as Boki: an anthropomorphic cat with neon green hair and chronic underconfidence. After an impromptu birthday gift lands her in an all-out military training simulation, Boki is quickly daubed with the ability to copy her opponents’ abilities, which you’ll need to help the feline protagonist conquer robot-infested cyberspace and become a fully fledged superhero. 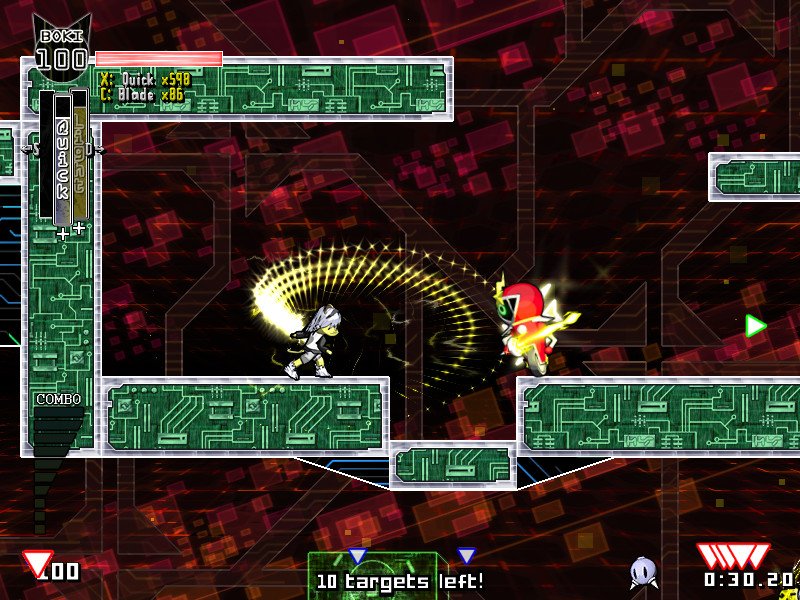 Levels are split into multiple themed ‘worlds’, with each individual level occurring as a separate world mission. Missions are reasonably similar in look and feel, and differ most noticeably according to how saturated with enemies they are. The visual style nestles somewhere between the character designs of Scott Pilgrim vs. The World and the colourful tropes of teen anime, while the side-scroll platforming layout echoes vaguely the Metroid games for the SNES. There’s also something of the pixelly grunge of the Megaman X titles thrown in, and though appealing to an audience far narrower than that of the squat, candy-coloured NES throwback, there’s a distinct nineties-ness about the game’s look; a pre-millennium cyberphilia that’ll have more than a few grinning their whiskers off.

The ability combine different weapon pickups to form unique, powerful super-blasts is probably Copy Kitty’s defining feature, but it doesn’t posit the mechanic as a novel idea. Collecting and cobbling together distinct weapon types proved immensely satisfying in earlier platform shooters on the Sega Genesis; an enjoyment Copy Kitty appears to recognize, then reinvigorate, by including an armoury vaster and more complex than its predecessors. Not only can you combine each individual pickup to yield hundreds of distinct attacks (each changing Boki’s neon-coloured look ever so slightly), but each item has limited use, requiring more a graceful alternation between attacking and evading to charge your ammo supply, than the all-out smash n’ bash the chaotic pace and cartoony world initially imply. What results is an intense, satisfying and surprisingly intricate platform-shooter, requiring just enough strategy to afford its simplistic interface and straightforward controls an attractive illusion of mastery.

Yet, there are some instances in which Copy Kitty feels like the in-browser Flash games I played during my high school breaks. Instead of the standard WASD controls, the player controls Boki using the arrow keys, using the Z, X and C keys to jump and carry out standard and combo attacks respectively. This lead Copy Kitty’s opening moments to feel fiddly and fragmented; coordinating swift platforming with well-aimed attacks can feel less like the smooth, impulsive keyboard-flutterings that’d make Boki feel awesome, than a collection of brief hesitations while the player remembers which button does what. Thankfully, the control scheme is straightforward enough to become intuitive as time progresses, but there is nevertheless the option to remap your keys if you’d prefer a more conservative scheme. 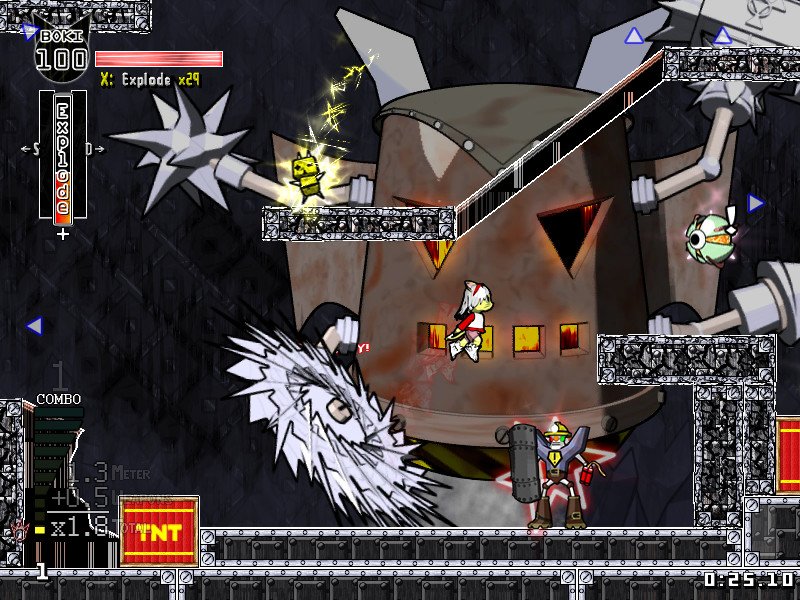 There’s also the odd slowdown to observe during particularly explosive moments, or on levels in which the player deals with a significant number of enemies at once. Though the game is usually adequate in terms of technical performance, hiccups of any kind can cause trouble in an action platformer, resulting in occasional missed jumps or imprecise attacks.

On the whole, it’s a good thing that the system doesn’t take long to get. Once Copy Kitty makes certain you can handle yourself, it hurls you into a series of whirlwind-like simulations, where exploding robots and mechanized sheep spew shrapnel at you from every available corner. Admittedly, many levels feel more hectic than they actually are, and provided you keep aware of your surroundings, most enemies are surmountable using an attack-take-cover strategy. While enemies can usually be worn down using Boki’s standard shooting attack, Copy Kitty’s real strength lies in the protagonist’s ability to combine the powers she absorbs into decimating super-weapons. The effect of your super-attack depends on the combination of power-ups available from the enemies in each level, but whether its conquering groups of enemies with an upward-sweeping tornado, or raining hell upon troublesome bosses with explosive orbs, executing any of them is wickedly satisfying.

While the simulatory forests, inner-volcanoes and arctic circles constituting the game’s themed worlds add a predictable sense of adventure to Boki’s training very much in line with the game’s arcade influences, environments are more remarkable for their brittleness. Boki’s attacks don’t only hurt enemies, but break down certain walls and platforms, and you’ll very occasionally need to think about your environment before spamming super-attack to avoid getting stuck in a precarious position. But again, breakable environments appear more often as simple obstacles than ingredients for strategic play; if anything, they help intensify the sense of obliteration that so pleasingly accompanies Boki’s super-attacks. 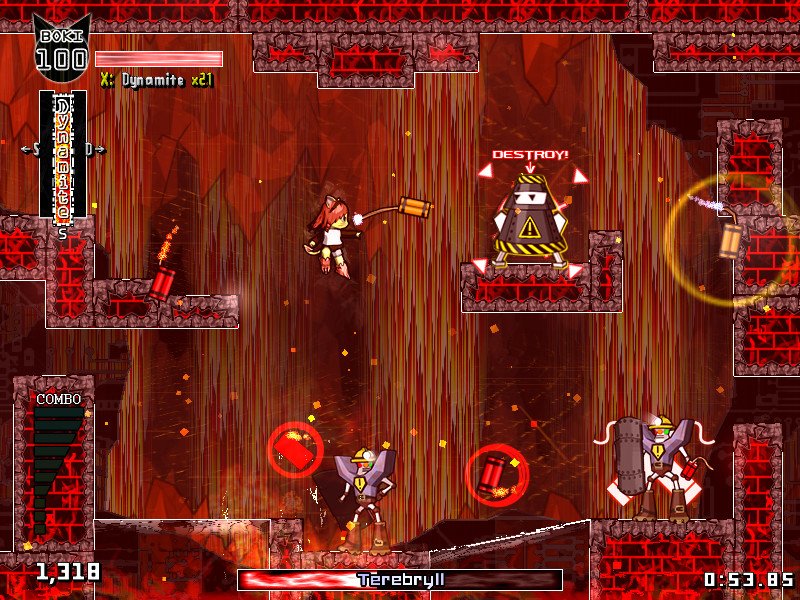 Copy Kitty’s bosses, too, echo the sense of scale and destruction extended by several SNES baddies, while replacing the hours of punishment they still traumatically evoke into accessible periods of superhero awesomeness. Boss sequences are perhaps the most explicit examples of Copy Kitty’s dedication to fun (rather than brutal challenge), for not only do they form the most inventive and aesthetically beautiful moments of the game, but effectively indulge your superheroic awesomeness, while still appearing threatening in behaviour. Let’s put it this way, before acquainting myself with Copy Kitty’s big bads, I never thought I’d attach so much formidability onto the image of a pouty-faced bomb pinata, or a giant ghost-onion with a propensity for hurling itself toward you.

Satisfaction is probably the best word to describe Copy Kitty’s particular appeal. It doesn’t patronise the player by offering a series of one-button defeats, but neither does it portend to be ‘hardcore’. Instead, it affords the player a sense of overblown power comparable to a Saturday-morning cartoon, and allows more than enough time to enjoy wrecking the simulation. Indeed, some levels even dedicate themselves almost entirely to allowing you to muck about with your new toys: one early section allowed me to tear through cyberspace having obtained control of a giant mech, while others enabled me to electrify my environment to annihilate all enemies in the vicinity.

While noticeably nichier than the since-mainstreamized NES throwback, Copy Kitty’s focus upon supercharged fun potentially allows it to appeal to audiences less-familiar with the action platform shooter. Equipped with a straightforward control scheme and accessible difficulty spike, the game quickly distances itself from the sort of punishment acclaimed in certain ‘hardcore’ spheres. Instead, Copy Kitty regularly fools you into feeling more masterful than you truly are, and as someone who can’t often utter the word ‘master’ without attaching a slew of disclaimers, I think that’s very, very okay.

Our ratings for Copy Kitty on PC out of 100 (Ratings FAQ)
Presentation
75
The Scott Pilgrim-meets-anime character design and SNES-like visuals carry an appeal more specific than that of the widespread NES throwback, but the focus on glitzy explosions and varied palette is nevertheless a welcome extension of the game’s dedication to superhero fun.
Gameplay
77
Copy Kitty’s opening stages may feel fiddly if you’re used to standard WASD controls, but thanks to a simple control setup and fair difficulty spike, the initial unfamiliarity quickly dissipates. You can always alter controls, though controller support would be appreciated.
Single Player
60
While the superhero-training premise feels rather cookie-cutter, it’s refreshing to see a hero whose most discernible feature is their shyness, whose feelings of unoriginality quickly form the base for Copy Kitty’s satisfying super-attacks.
Multiplayer
NR
None
Performance
(Show PC Specs)
CPU: Intel Core i7-4710HQ
GPU: Nvidia GeForce GTX 860M
RAM: 8GB
OS: Windows 10

67
Usually adequate, and will usually run smoothly, even on PC’s with lower specifications. However, mild slowdown can occur when using frequent super-attacks, or during levels in which the player deals with multiple enemies at once.
Overall
71
Copy Kitty exemplifies Nuclear Strawberry's emphasis on fun, and through an accessible control scheme and periods of glorified heroic power, it could very well open the action platformer genre to wider audiences. 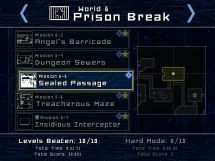