THE EVIL WITHIN 2
Platform: PlayStation 4
63
SummaryNewsArticlesVideoScreens

The Evil Within 2 Review

An underwhelming horror sequel that often fails to scare

I’m a pretty easy mark for horror. I watch scary movies with my eyes closed, I jump at just about anything; it doesn’t take much to freak me out. I say this because I want to make it clear what I mean when I say that The Evil Within 2 isn’t scary. While the first game kept me on edge for at least two-thirds of the experience, The Evil Within 2 starts off flat and while it has a couple of decent moments, it never really finds its stride as a horror game. That’s partly because The Evil Within 2 doesn’t seem convinced that it wants to be a horror game. In terms of aesthetic and mechanics it feels like it’s trying to be a survival/stealth/action game, something far more akin to The Last of Us than Resident Evil. I could make comparisons to all sorts of games, and that’s because it’s pretty clear The Evil Within 2 is borrowing from just about everyone. At times it wants to be Outlast, other times it wants to be State of Decay, and sometimes it even hopes to be Uncharted. But this sequel doesn’t do any of these impressions very well, and while it never crosses the line into being a bad game, it constantly dances the line of mediocrity, failing to deliver anything you haven’t seen done better elsewhere. 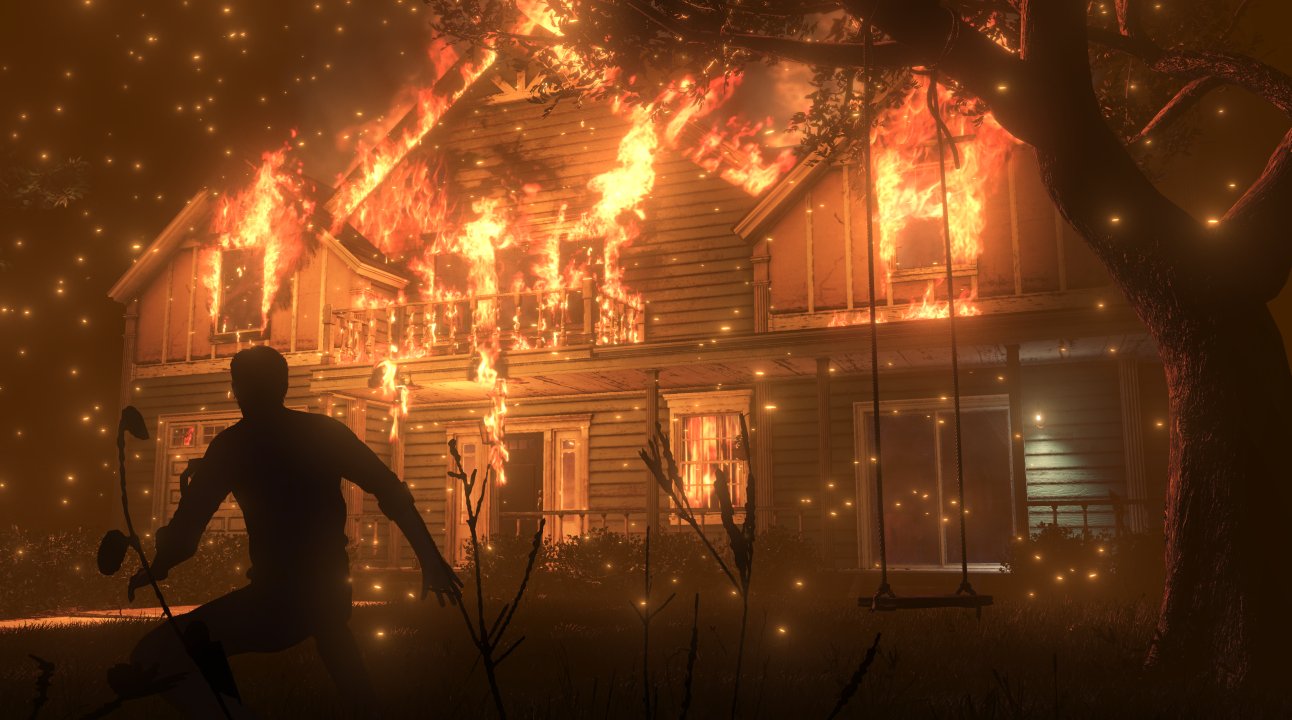 It all starts with the story. I remember in my review of the first game saying that the story was scattershot and a little hard to follow. To their credit, Tango Gameworks have simplified things. The narrative begins with Agent Kidman (you might remember her as the lone surviving member of your team in the first game) finding protagonist Sebastian Castellanos at the bottom of a bottle, and abruptly telling him that the daughter he thought was dead is actually alive and being used for testing by an ambiguous company called Mobius. The daughter, named Lily, is the “core” of a STEM machine - an apparatus that allows multiple parties to pass into a dream state where they share a location. It’s never really explained how any of this is supposed to work or what the rules are, or why Lily was needed, or why they are choosing to reveal this to Sebastian now. I would accuse the game of telling over showing, but it doesn’t even do much telling.

I wish I could even call the plot serviceable, but it’s just bad. The cast has little-to-no chemistry, no one actually acts like a human being, the information is inconsistent, and while one wants to give an over-the-top blockbuster game like this the benefit of the doubt, there’s just nothing to salvage here. The game commits just about every cardinal sin of narrative that’s possible. One example is how Castellanos, a man who has dealt with STEM machines before and knows they’re unpredictable, spends the beginning of the game constantly utter a variation of the phase, “What the hell?”, like he’s never done this before.

What’s worse is that I can’t even ignore the plot and just enjoy the tone because the nasty horror tension doesn’t work this time around. In the last game, the strange locations and abrupt scene shifts raised the stakes and created suspense because you didn’t know what was happening. The game drenched itself in over-the-top gore to disgust the player, accenting the dread with gross spectacle. But this time around you already know what’s happening, undercutting any tension, and the game feels watered down when it comes to the gore. 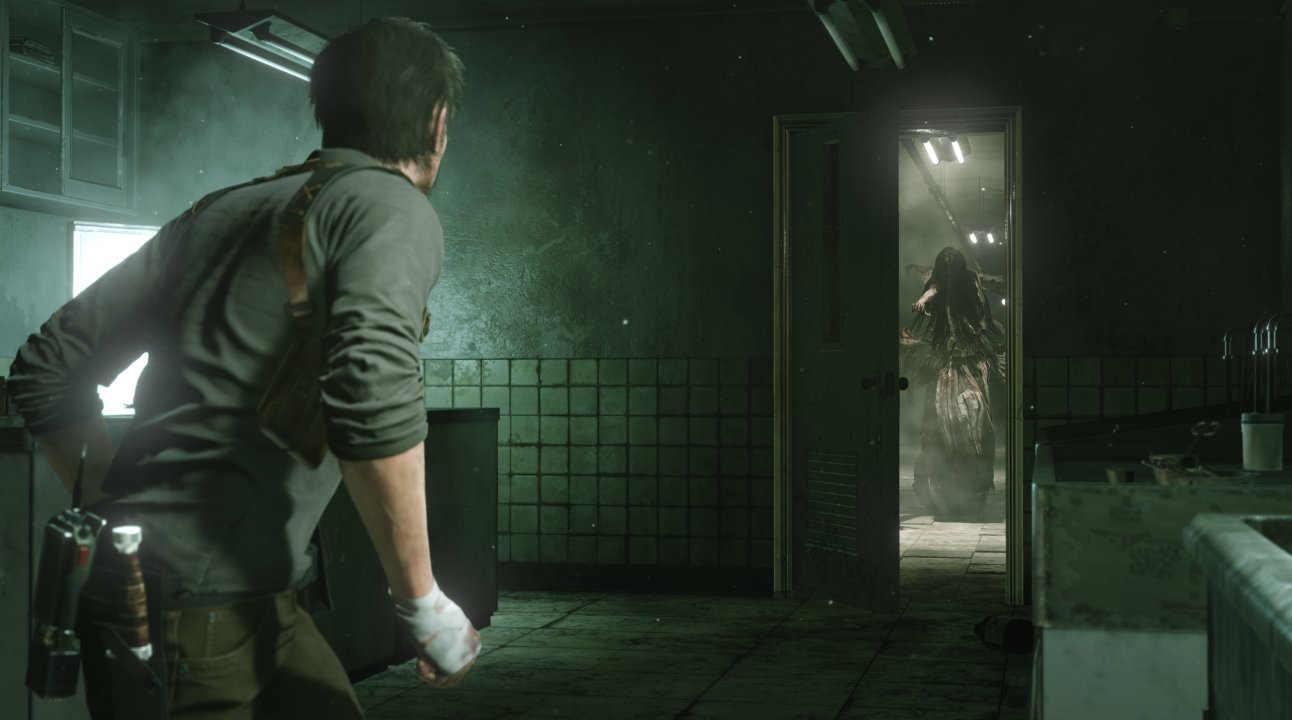 The Evil Within 2 doesn’t even bother to concoct a ripple to the set-up. While the last game attempted to give you a tour of horror clichés, The Evil Within 2 can’t even manage that. Instead it dumps you into a city called Union that is breaking apart, as the core has become unstable. At first, I thought the game’s open-world twist might be a new feature of the game - and one that worked. The first few chapters are long and provide lots of optional content. You can explore the houses and help strangers that populate Union. The opening stage is almost more like a zombie game, such as Dead Rising or State of Decay, and enemies that populate the stage like the Lost and the Hysterics are riffs of creatures you’ve likely in seen in said zombie games.

While it’s not necessarily inventive, had The Evil Within 2 stuck with this semi open-world design, it might have been more interesting, but it’s not long before the game starts funneling you through corridors from one level to the next. It does employ some larger sections that kind of harken back to the open-world feel of something like Silent Hill, but nothing quite like the very early chapters. And it all becomes rather forgettable. Not just the settings, which are already fuzzy in my memory (and I just beat the game a few days ago), but the enemies, the weapons, the combat. While encounters from the first game stick out in my head, I can hardly recall any fights except some boss encounters in The Evil Within 2.

To illustrate my point, I’m going to have to get into minor spoilers, so skip this paragraph if you want. The penultimate boss fight is a retread of three bosses from the first game. There’s hardly an explanation for this, other than the villain saying, “Remember the asylum...” and then you’re dropped from one fight to the next. It shows that Tango Gameworks doesn’t seem to have many new ideas for The Evil Within 2.

The pacing of the chapters is very similar to the first game. Throughout the game you’ll find safe rooms that allow you to upgrade your equipment and craft materials. You can drink coffee to replenish your life and you can save your game. Most of these safe rooms also have a mirror that takes you to Castellanos’ room where you can also craft items, and you can see Tatiana Gutierrez who straps you into a strange device that uses the green gel you get from killing monsters to increase your abilities. These upgrades are all pretty standard - additional health, more damage, a few special melee attacks. The same is true of the weapon upgrades, it is standard stuff like more damage, faster fire rate, and faster reload. There’s also a shooting gallery where you can practice your gunplay. 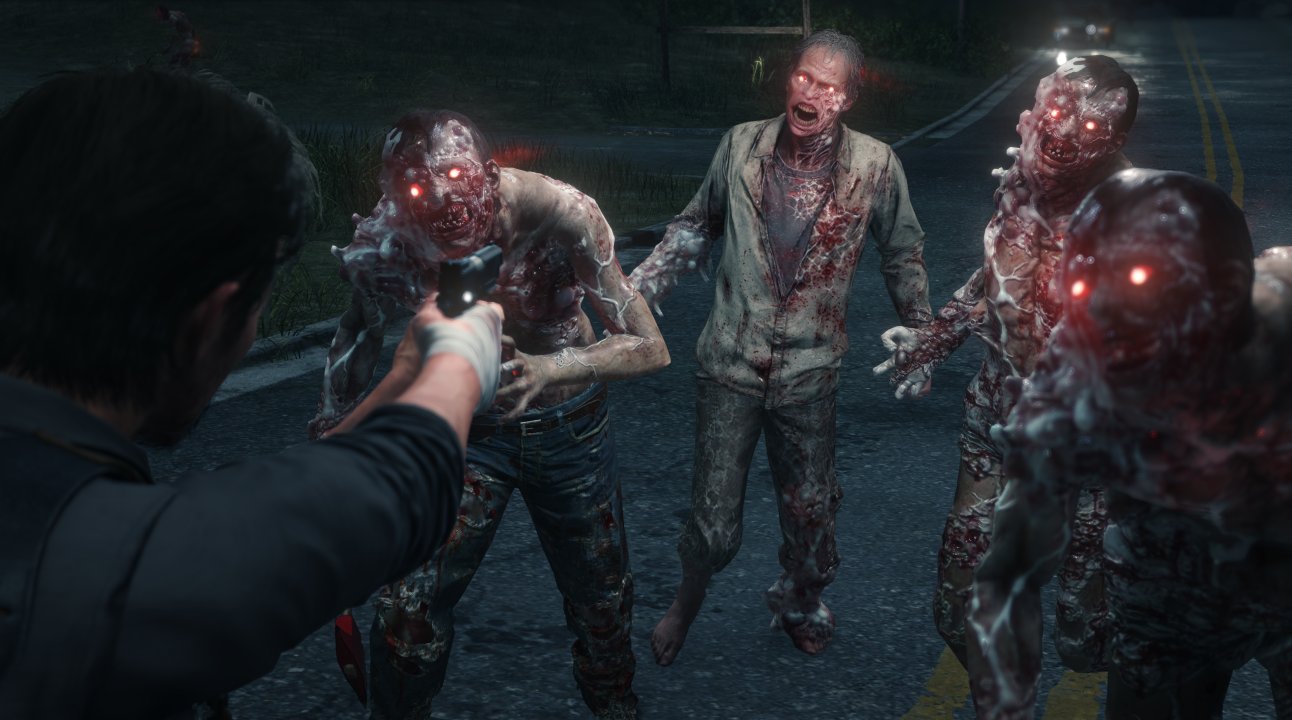 The action itself is alright. It feels like there’s more of a reliance on stealth, but it’s not as well-honed as in the first game. Part of that is because The Evil Within only used small, enclosed spaces, so the stealth worked a bit better. In the open-world sections, you can run right by enemies, usually outrunning them and they’ll quickly give up the chase. There are still moments of tension when you can sneak through tighter areas, but they are less frequent. The stealth combat is also a little sticky. I particularly had trouble with being able to attack enemies from around corners, a skill you pick up later in the game. The rules of stealth felt inconsistent.

The shooting is about the same as the stealth. The sequel is less forgiving, and killing enemies can really be a pain. The swing of the weapons makes them cumbersome to use. You almost always need to run around to create space and give yourself time to aim. There are also times when you’ll need to quickly retaliate, but trying to raise the gun and shoot rapidly causes Sebastian to often waste a bullet into the ground - even with the aim assist turned on. The cumbersome shooting would be easier to forgive if the stealth was more viable, but more often than not you end up in combat anyway.

The weapons and gadgets all kind of echo the rest of the gameplay. They’re functional, and the shotgun feels pretty good. But the selection is very generic. There’s a pistol, an automatic rifle, and a sniper rifle. The sniper rifle is usually the odd man out, it’s handy in the small open-world areas, but really isn’t worth much in the corridor sections. A slightly unique weapon is the crossbow, but I found it such a bother to use, I didn’t spend much time with it. The game encourages you to set traps and use strategy, but I hardly ever had enough of the specialty trap bolts to do so. Instead, I often found myself relying on the most powerful weaponry to kill enemies in a couple of shots, since ammo is pretty rare.

Lastly, it doesn’t help that the game is flawed technically. I had a handful of framerate issues, and a few crashes. The loading screens are pretty long when you die, and none of it looks particularly great. The game loves to pull the camera in close to the faces of the characters, which highlights how everyone kind of looks like a mannequin. And when conversations are happening outside of cutscenes they are painful to watch as characters mechanically mouth lines. 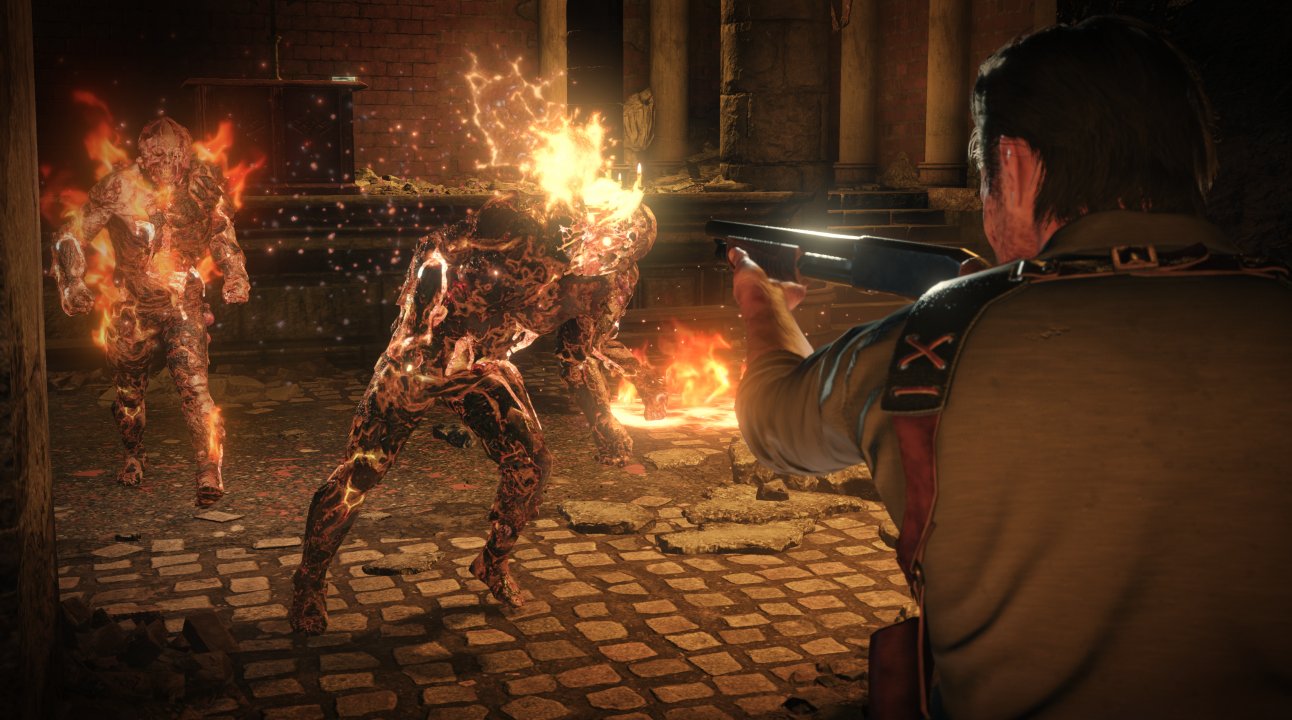 Again, The Evil Within 2 isn’t broken or unplayable. If you turn off your mind, there’s a bit of fun to be had with the stealth and action mechanics. But none of it stands out, none of it excited me or engaged me. The first game was memorable due to how visceral and nasty it wanted to be. It coated the world in fountains of blood and used its set up to confuse the player, hiding what was going on. Looking back, it might have been that aesthetic that hid some of the mechanical flaws. Because now that the sequel has toned itself down and the scares are all gone, the only thing that is left is the terrible story and middling mechanics.

Our ratings for The Evil Within 2 on PlayStation 4 out of 100 (Ratings FAQ)
Presentation
65
There is nothing terrifying about The Evil Within 2. The nasty ambience of the first game has been traded in for something milquetoast.
Gameplay
67
The stealth and shooting are hit and miss, but the game does lean hard on the survival aspect and that’s nice to see.
Single Player
49
The opening chapters threaten to change things up with some open-world ideas, but it’s not nearly prevalent enough to save the game from it’s awful story and predictable pacing.
Multiplayer
NR
None
Performance
65
Loading times are long, there are occasional framerate issues, and I dealt with multiple crashes.
Overall
63
The Evil Within 2 doesn’t have anything new to offer the franchise. It fails to be frightening, the narrative is a mess, and it only manages to keep its head above the blood water with some decent survival-action mechanics. 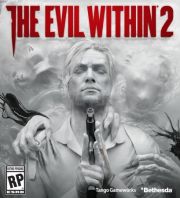 All videos for The Evil Within 2 (4)
Advertisement ▼