The ‘90s were a wild time for gaming. No genre had a set framework, so developers went nuts trying to figure out what worked. It led to a lot of classic games that eschewed reality to make something more arcade like. Road Rash was one such game, combining hyper violence with motorcycle racing.

I actually don’t have much of a background with the series, but the pure joy of smacking a dude with a chain and watching him tumble into traffic is a visceral type of fun that has been missing in the modern gaming landscape. We may have gotten bigger and more beautiful graphics, but the industry’s shift towards realism has essentially buried outlandish ideas like Road Rash. 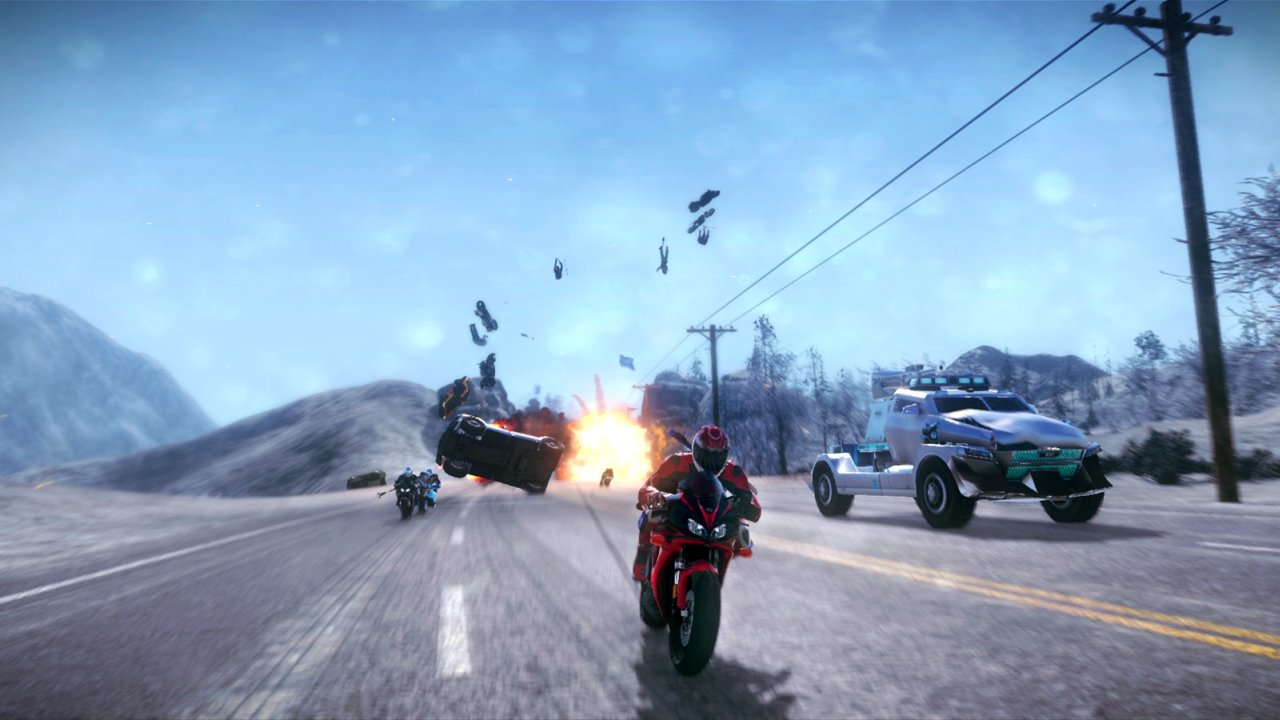 So enter Pixel Dash Studios, EQ Games and their love letter to a bygone era with Road Redemption. While Redemption might have more modern technology powering it, it accurately captures the essence of what ‘90s gaming was while providing a new twist on the formula with some procedural generation and roguelike elements. This is Road Rash meets Rogue Legacy.

Unlike the classic titles, Road Redemption features a single-player campaign mode with a pretty thin plot. Taking a page out of Mad Max, Redemption takes place in a wasteland where biker gangs roam wild. A masked assassin has killed the leader of a weapons cartel and a bounty is out on his head. Every gang in the area is now gunning for the bounty, which results in you ripping through a bunch of rival gangs to get to the assassin.

To say that the plot doesn’t matter is almost kind of obvious. If you have any interest in Road Rash, you’ll already know how the context of those games didn’t matter. It was all about the different weapons you could obtain and the various ways you could dispatch your foes, something that Redemption nails.

You have the classic attack left and right as well as a kick to push opponents away and a melee counter, but Redemption mixes things up by offering a plethora of different melee and ranged weapons to wreak havoc on your foes. You’ll start with a lead pipe that can then be upgraded to a spiked bat, you’ll have access to a machete and some different swords and there are even pipe bombs and TNT packs that you can stick to riders to really screw up their day.

Then there are the firearms, which are both completely overpowered and totally unwieldly to use. While I understand why auto aim isn’t enabled on the guns, the awkward manual aiming that Redemption utilizes can sometimes make hitting your opponents a total crapshoot. Since you’ll be blazing at high speeds down highways, it’s quite difficult to focus on the road while trying to line up shots. When you do, though, enemies will fall in a couple of hits and the range of the attacks is insane. 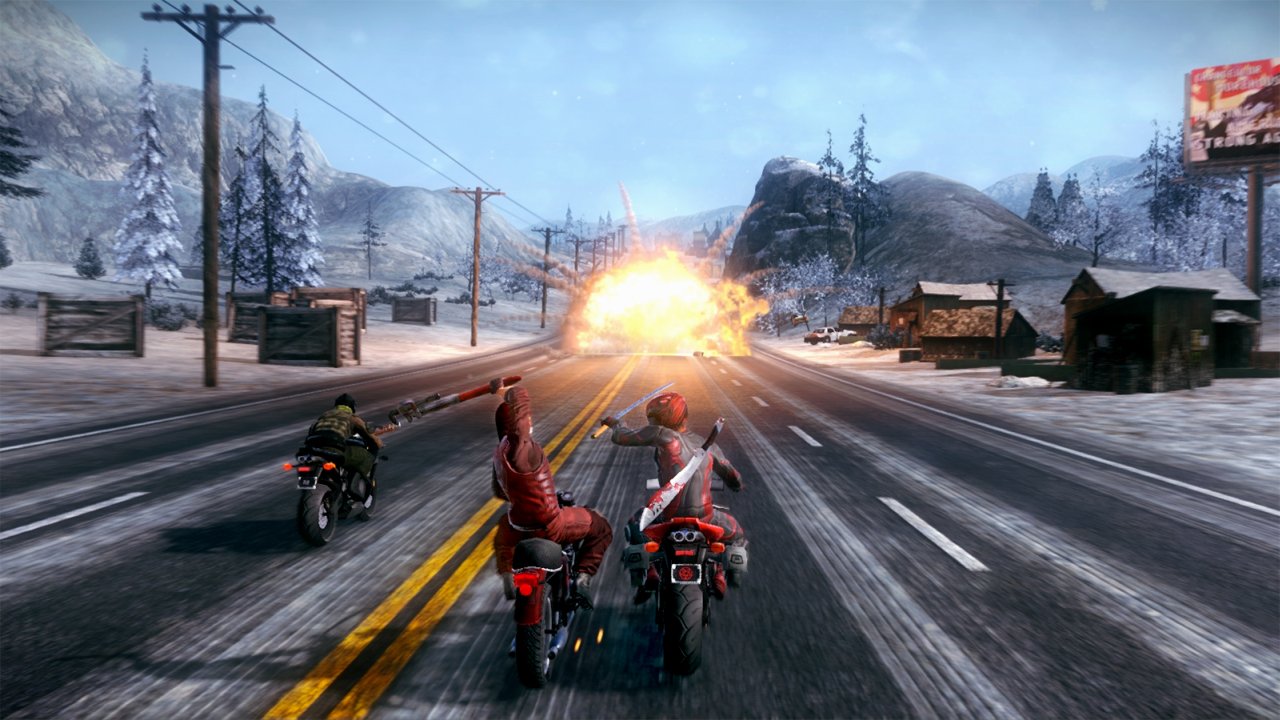 Thankfully this game isn’t solely about combat, with the campaign mode mixing up the various objectives between levels. Sometimes you’ll have a strict race (where you’ll attempt to come in first place) and other events will see you just surviving an onslaught of police officers. There are three territories you’ll run through, each one ending with a boss fight against the specific gang leader of that area. As I mentioned, guns are overpowered, so these boss fights are kind of pointless.

Should you happen to die during the campaign, then it’s back to square one for you. Road Redemption adopts roguelike elements to mix up the gameplay and while it can be rough at the start, the progressive unlock system means every playthrough is worth something. As you finish levels, you’ll earn XP that you can then spend on permanent unlocks for your character to help you better tackle the campaign mode.

In a surprising twist, these upgrades aren’t necessary to finish the game. On my first attempt at the campaign, I made it to level 15 of 20. In between races, there are temporary upgrades you can buy, but Road Redemption is a lot more focused on skill and speed than it is on having the player grind out upgrades to eventually reach the finish line. If you can master the attack and counter system as well as get a hang of the motorcycle handling, you will make it pretty damn far.

The random nature of the levels, however, doesn’t do many favors for replays. While every level has a different theme, the tracks end up feeling the same after a couple of run-throughs. Standard races tend to be ridiculously drawn out with oddly long shortcuts while the other objective maps can sometimes be too short. At least the theming is great, with the rooftop levels bringing an extra level of intensity to the proceedings.

If you get bored of the campaign mode, you can invite a few friends to play along with you. Split-screen is available and it becomes a ridiculously over the top experience. You can screw over your friends or team up on bosses and vault over the sometimes steep difficulty. The online option, though, is limited to team based races and features a progressive unlock system similar to Call of Duty. To say it misses the point of the game is an understatement, seeing as how people who have put in more time have a clear advantage over new comers. 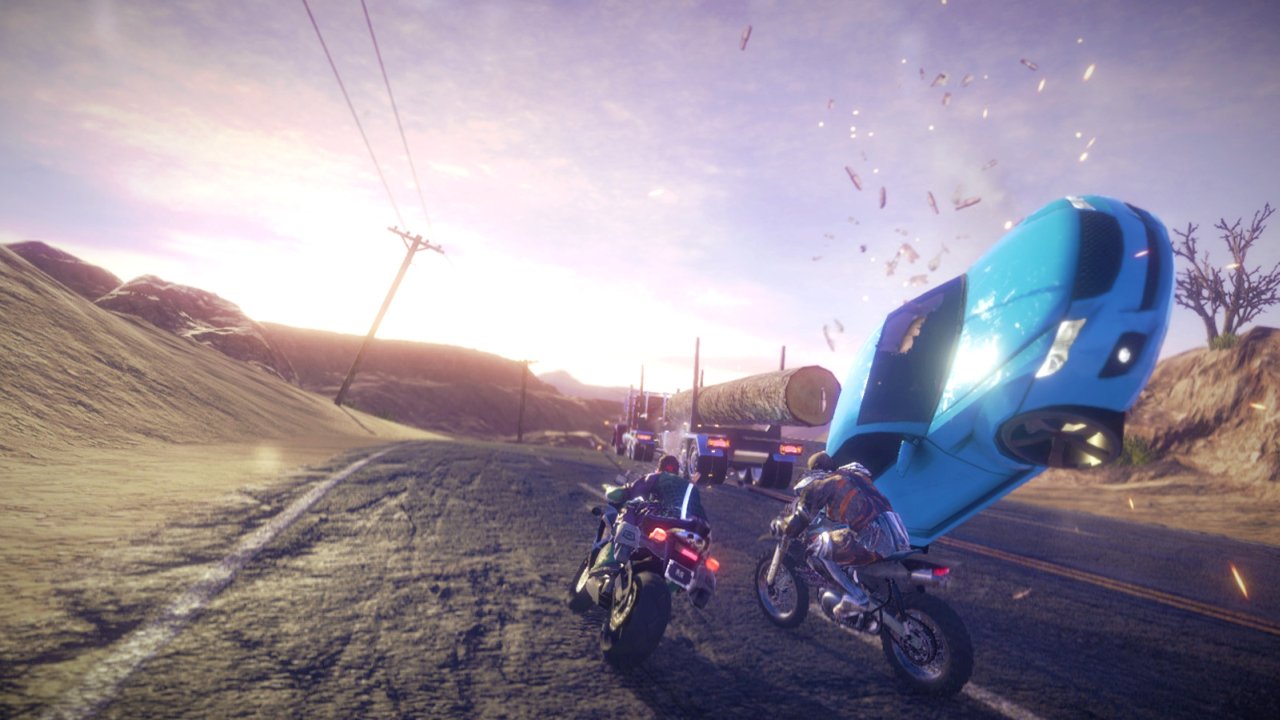 Aside from multiplayer, the only other option is Classic Quick Race, which more accurately recreates the Road Rash experience. This removes any progression and campaign trappings in favor of just putting you on the road with other racers. It is certainly fun, but the lack of specifically curated tracks means that time trials are kind of a crap shoot. Whatever time you put up, someone else can best it simply because the procedural generator happened to roll better for them.

The one factor I can’t defend is the presentation. While the music is serviceable, Road Redemption looks like a game from a generation ago. This is quite the ugly experience, often exhibiting low resolution artwork and some stiff animations. It thankfully runs at a very smooth framerate, but can be a little choppy at times. Split-screen doesn’t tax the experience too much, at least.

Our ratings for Road Redemption on PC out of 100 (Ratings FAQ)
Presentation
60
Road Redemption looks like a last generation game with some sloppy textures and odd voice acting. The music is also mostly forgettable, though it definitely fits the mood.
Gameplay
80
This is where Road Redemption really shines. The mechanics are solid and the extra weapons really expand the options available to you. The campaign is short, but the roguelike nature provides a clear sense of progression that helps ease players towards the finish.
Single Player
70
The campaign mode works similar to Rogue Legacy, so you won’t be finishing it on your first run. As for how long it will take, that depends more on your skill level, but I put in about five hours before my first clear.
Multiplayer
70
Road Redemption features split-screen offline for the campaign mode and a pretty basic online race option. I can’t say that I’ll ever return to the online action, but split-screen runs well and is pretty damn fun.
Performance
(Show PC Specs)
CPU: Intel Core i7-3770
GPU: Nvidia GTX 1060 6GB
RAM: 16GB DDR3
OS: Windows 10 Home

70
Mostly maintains solid framerate throughout. There are some choppy bits when data is streaming and split-screen will tax the game, but its good enough.
Overall
70
This may not be the best classic revival around, but Road Redemption is a lot of fun with a pretty well implemented roguelike system. The inclusion of multiplayer is also sure to make this a great party game for some likeminded friends. 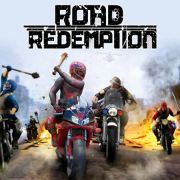