Since the start of this console generation, Konami’s Pro Evolution Soccer franchise has been on a steady upwards climb. It strived to return to glory, and to offer a worthy alternative to EA’s FIFA series, all the while capturing the hearts and minds of loyal long-serving fans. And last year, with PES 2017 they came very close. Offering its own unique brand of soccer simulation, the game succeeded where some would argue it matters most – on the pitch. Sure, it was still lacking in a few areas, but for some this was seen as the break the franchise was working towards for a few years. PES 2018 hoped to continue and build on this momentum, but you know what they say about best laid plans. 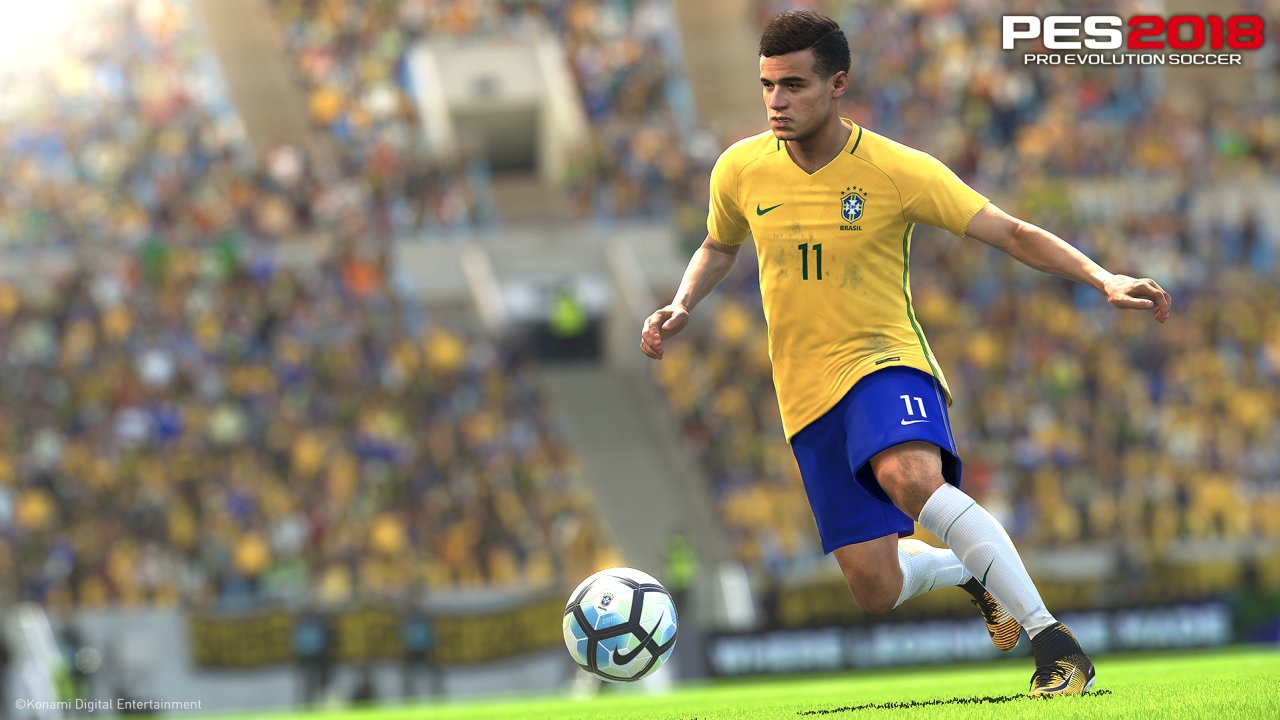 Following last year’s great performance on the pitch, PES 2018 had a relatively simple task – stay the course. The franchise has finally created its own, well designed simulation of the sport, and the action on the pitch remains satisfying. Most of the effort was put into improving the major gameplay elements that worked well last year, and adding fancy-named tech like REAL Touch +. But on the surface, most players will find PES 2018 to be quite familiar. It still plays a solid game of soccer; players and the ball feel like unique physical entities not tied into animations like they can sometimes in EA’s FIFA. They are individuals, with their own style and finesse, with many using the player captured data to great effect. Though the shooting button is a bit too sensitive, you can score some darn beautiful goals in PES 2018 that will make you physically cheer – a rare feeling that FIFA has been a bit less successful at recreating. It’s solid, and on the surface it continues to build on last year’s entry.

But something happened. Somewhere along the way of tweaking the great gameplay from PES 2017, a number of issues have snuck onto the pitch in this year’s edition, and it hampers an experience that seemed so close to greatness. It starts at the back, with goaltenders being rather inconsistent and becoming either unsurpassable mountains or pieces of Swiss cheese. There’s a notable problem where they have the tendency to drop and deflect the softest of shots, instead of just holding on to them. And once the ball is spilled, all hell breaks loose and the AI falls further into trouble. While friendly AI issues on attack are annoying at worst, in defense they become downright frustrating. Your AI defenders seem to love avoiding the ball and backing away; if they see a loose pass, rather than sprint towards it they instead run to the nearest opponent in hopes of intercepting any forthcoming pass. This simply leads to the attackers picking up that loose ball and continuing on. Tackles can be equally futile, with your defender having won the ball but refusing to actually take control of it, letting the attack continue. On many occasions, they decide to take too many fancy touches to control the ball before clearing it, which of course results in getting dispossessed. Dangerous situations in the box are less about stress, and more about wondering how your AI defenders will mess up this time.

Other bugs occasionally arise too, such as refs not allowing to play-on after a foul and clear control of possession, or crosses being very overpowered, particularly if they arrive at volley height rather than for headers. Players in general seem to need extreme micromanagement if you hope to avoid terrible gaffes in defense, but unfortunately, PES 2018 seems to have an issue with the very basic player switching mechanic. Other than the new, marginally useful icon that indicates what player you’ll be switching control to, it just never turns out to be those closest to the ball. The entire system feels off, and as if there is lag between your input and action. There’s an obvious issue with player selection logic when using the standard shoulder button to switch players; while you can do it manually with the right stick, that doesn’t really excuse the fact that this basic mechanic has such a big problem. Another recurring annoyance is the stamina system, which leaves your squad (especially lower rated players) completely drained by the 65th minute, even if you sparingly/don’t sprint at all. All in all, after so much success last year, PES 2018 unfortunately lost something during the off-season and the gameplay has taken a step back. 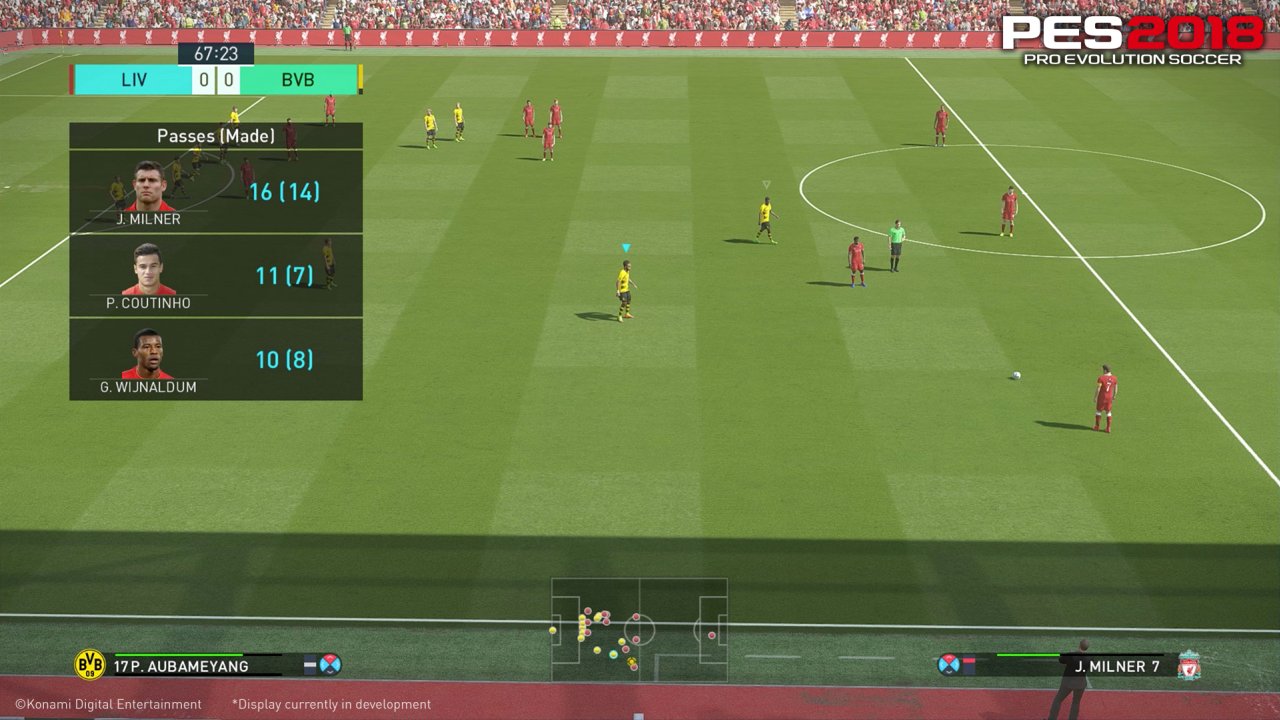 Not much has changed in the way of licenses, where the franchise was always lacking. There are no notable additions to speak of – the same few large clubs such as Barcelona, Liverpool, and Borussia Dortmund are the headliners, along with official presentation for UEFA Champions/Europa Leagues and AFC, but many of the biggest teams remain out of the game, from Real Madrid to most of the EPL. There’s still the option to import user-created teams to help fix this, but it’s a sore spot that’s become synonymous with the series. At least the players are present in their authentic glory, many offering very good facial likenesses, and this year the Legends roster has been expanded to include names such as Michael Owen, Javier Zanetti, and Dejan Stanković.

All of the standard gameplay modes return, with few alternations. In Become a Legend you can still control the individual real or created player and hope to build a career for yourself. With a custom player you still can’t pick the exact team you want, just the league. You can also ask to be traded if your current club isn’t what you’d hoped it would be. During matches, the game still makes you watch the entire 90 minutes even when you’re on the bench, with no option to simulate. In Master League, aspiring managers can take their team to the coveted Treble by managing the squad, tactics, contracts and more. New in PES 2018 is a higher-difficulty setting called Challenge mode, where the other teams will be tougher to negotiate transfers with. You could even be sacked, as there are now Club Owners who provide certain objectives that you should meet to raise their trust meter. Some players now have release clause value, so you can’t steal them away without paying a hefty sum, and a pre-season series of games helps you get a feel for the squad. Overall these are minor additions that, along with a slightly revamped but still outdated menu system, don’t exactly revolutionize the gameplay modes.

There are two brand new additions though, and that’s the expanded co-operative play and the Random Selection match. The latter returns from the earlier days of the series, where two local opponents choose a category to randomly generate a lineup from (such as team or country), and then have a round or two where you can steal each other’s players. This is a rather fun mode for some local, randomized competition. If you’d rather play co-operatively, PES 2018 has a wealth of options for 2v2 and 3v3 play, with guest support, for both local, against COM, and online matchups. Any spots not taken up by players will be filled by the CPU, and it can be quite fun to play online together. The notable downside here is that you can’t choose what team to play as, with the game randomly selecting what it thinks are two powerful clubs. 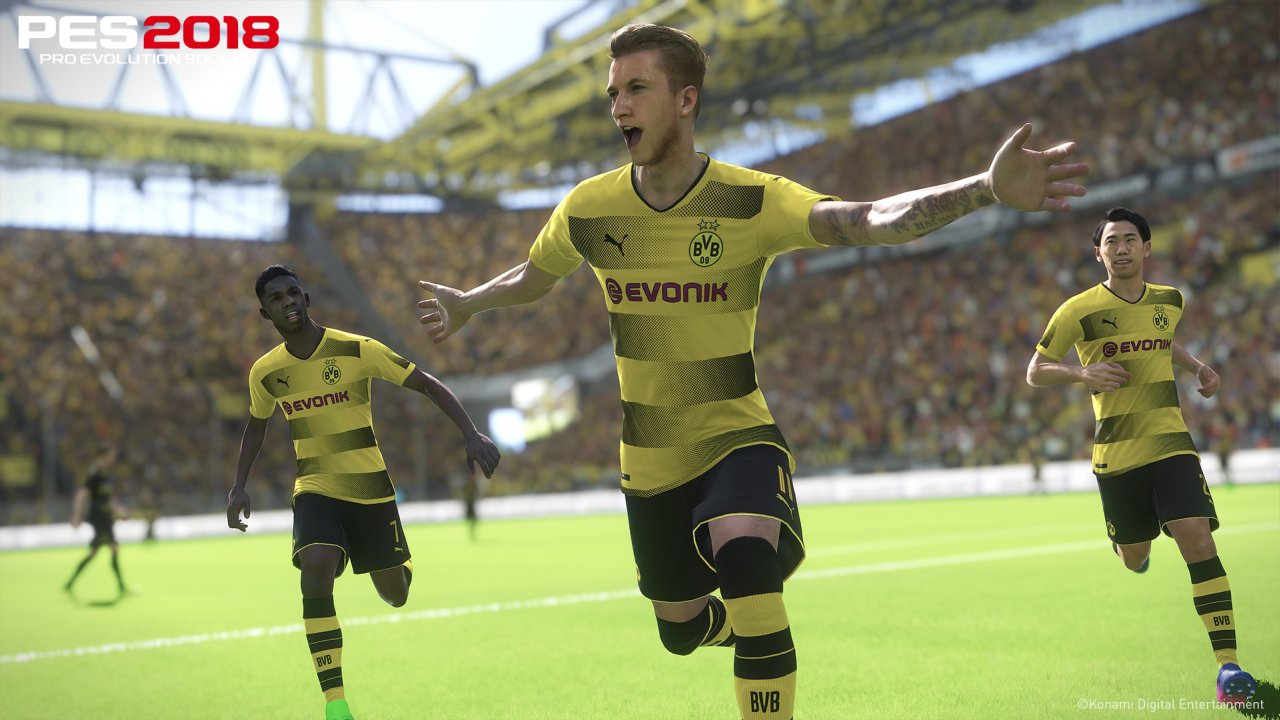 And as you head online, you’ll find the myClub mode still trying to draw most of your attention. You start from scratch, and try to build up a good team through signing new players via agents, still leaving it up to chance on who you’ll get. The system remains interesting but also unfair in some regards, as you have so little control over your signings. Further, acquiring new agents is still a convoluted and long process through the market system bidding against other players. There are some issues with matchmaking/team ratings balance though, as somehow a team fronted by Maradona, Torres, and Cavani is rated 1 star and gets to slice through your 60-rated defenders.

If you’d rather play more traditional Online Divisions, that’s still available, as is Team Play. The online populace remains scarce, and in some modes it can take over 5 minutes to find an opponent. Perhaps that’s partly due to the sheer variety of options – there’s exhibition match, myClub match, Co-Op matches, Team Play, Online Divisions, and practice matches. It spreads the online populace way too thin, as each mode has its own matching/lobby system. Connectivity during matches is fine for the most part once you finally get an opponent, though you can still only quit/surrender at half time, and only in some of the game modes.

In presentation, the game continues to have its ups and downs. On the one hand, player likenesses, their emphatic and authentic goal celebrations, and some of the official stadiums look nice, and the soundtrack is a nice mix of popular songs. On the other hand, player animations don’t always gel together very well, the crowds look to be from last generation, and menus are slightly tweaked but still feel outdated. And of course, there’s the commentary – the very repetitive, generic and lifeless punditry that’s been growing more and more grating with each passing year. 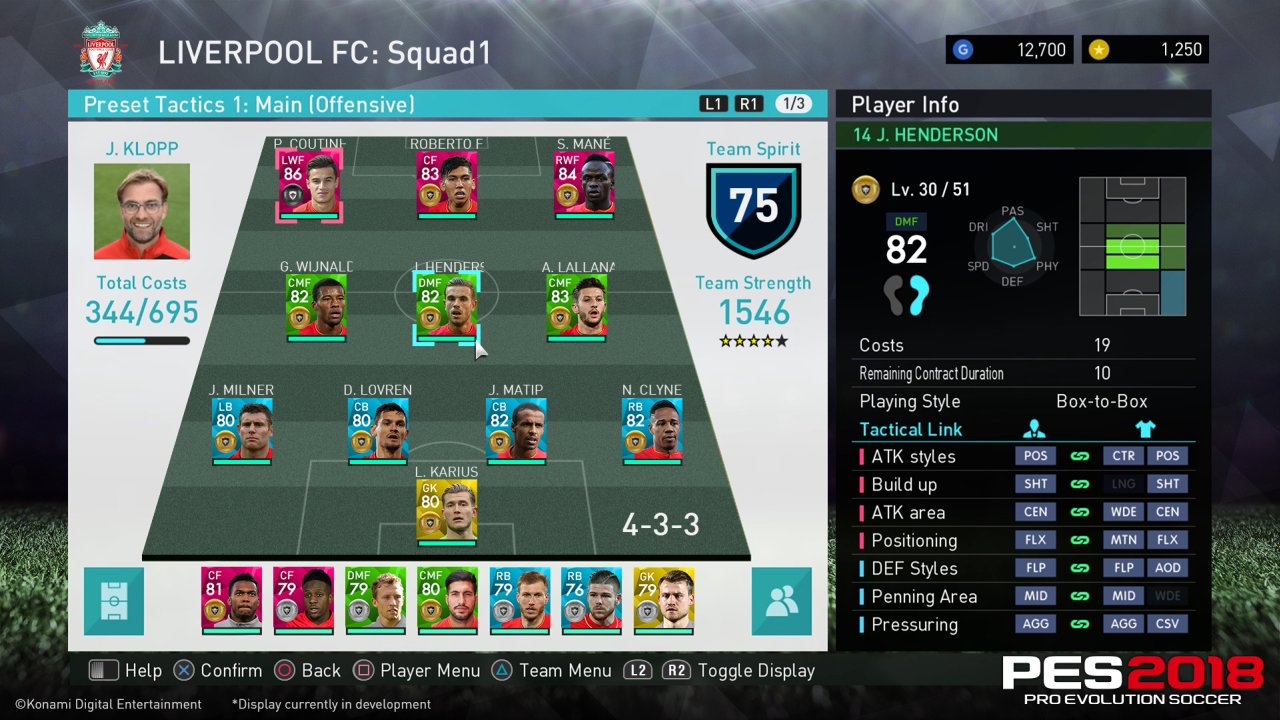 After reaching its peak during this console generation last year, PES 2018 is a stumble. It’s not a big setback, but clearly things didn’t go according to the gameplan. Following a great performance on the field of play twelve months ago, this year’s entry comes with a share of unexpected and troubling gameplay and AI issues that cast a cloud over the stadium. And seeing as the rest of the game is largely the same – lacking licenses, featuring few changes to BAL/ML/myClub – it sets the whole experience back. The additions of co-op and Random Selection modes are neat, but they can’t exactly carry the game. Presentation is uneven, with old commentary and nice soundtrack, poor crowds and good player likenesses. PES 2018 is a decent offering, but whether you’re new to the series or a returning fan, it’d be better to pick up last year’s game instead if you play mostly offline.

Our ratings for Pro Evolution Soccer 2018 on PlayStation 4 out of 100 (Ratings FAQ)
Presentation
70
Player likenesses and authentic celebrations remain a highlight, but basic menu design and dreadful commentary continue to be a burden.
Gameplay
69
After a very good outing last year, and while it can still produce some amazing moments, PES 2018 has a number of unfortunate gameplay and AI stumbles.
Single Player
78
Random Selection mode and Challenge setting for Master League are neat, but aren’t exactly huge additions.
Multiplayer
75
myClub is unchanged, with its unique but challenging design. The wealth of new 2v2 and 3v3 co-operative options is a nice highlight for those looking to play together. Online matchmaking takes a while across many modes.
Performance
78
Some of the menus can be slow and there are plenty of black loading screens, but there are no issues during matches.
Overall
72
PES 2018 still plays a solid game of soccer, but is unable to carry on the momentum built up with last year’s good outing. A few gameplay stumbles let down what is otherwise a largely unchanged experience.