Making music without rhythm or purpose

When you think of musical games you probably imagine licensed songs, colorful instruments, dance moves, and QTE sessions that wear fingers down to their nubs. The genre has struggled in recent years, perhaps due to oversaturation, or maybe developers are merely waiting for gamers to regrow their raw and bloodied digits. Fortunately you don't need fast fingers in Beat The Game, as you just need to find sound samples in an environment and mix them together to create music. Beat The Game is an awfully brief demonstration of mixing music in a bizarre world. It is unique, but it struggles because it lacks substance. 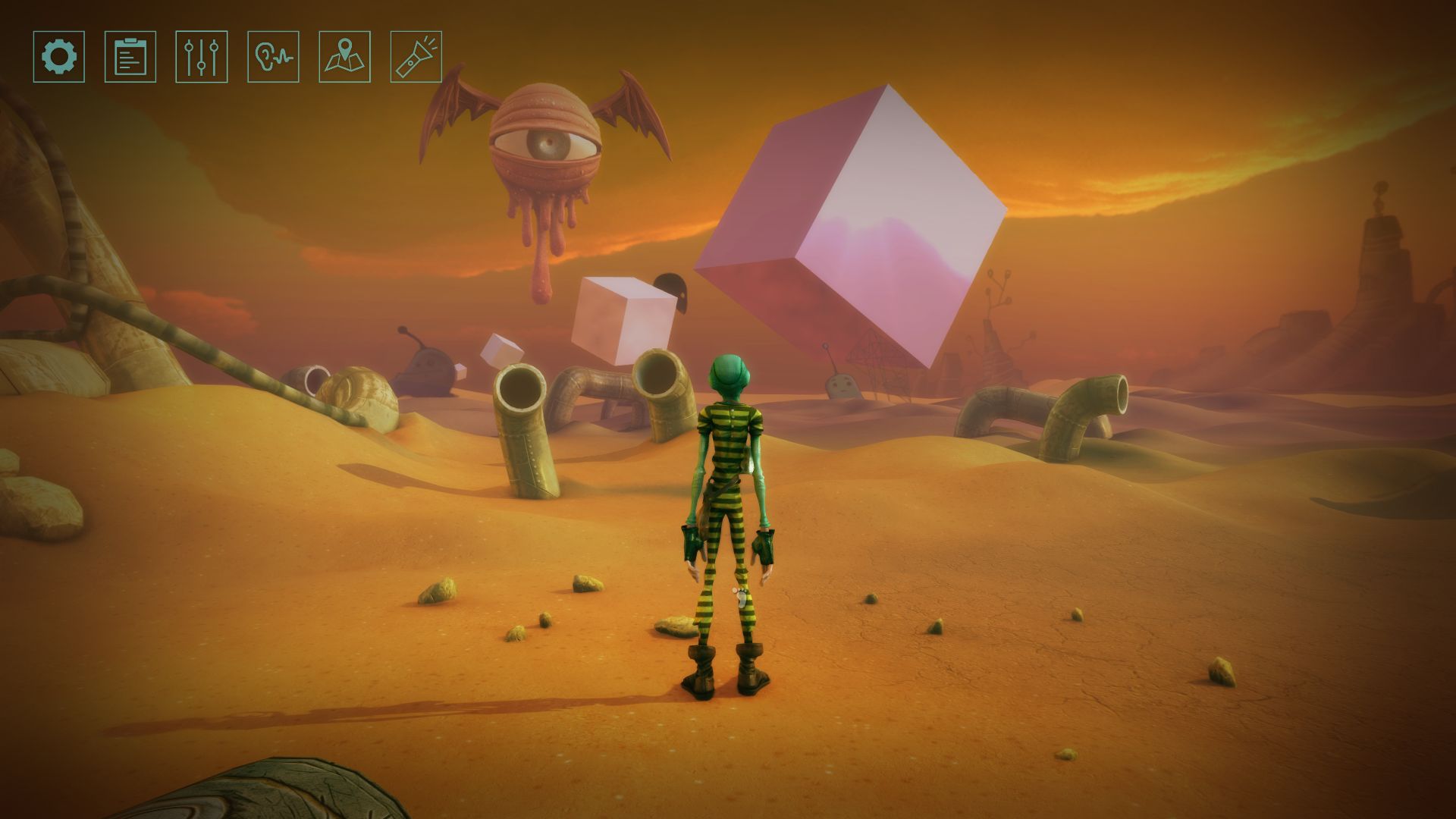 In Beat The Game you play as the strange looking character named Mistik who crashes his motorcycle in the desert. The desert setting is abstract, with bizarre floating stuff orbiting in the sky. Strange objects are buried in the sand and a peculiar character seems to follow you around. Mistik does not talk and there is really nothing here that could be described as a story in the traditional sense. Mistik has one goal: perform a mixing concert. But he can only do this after he captures all 24 sounds in a tiny area of desert.

Many sounds are collected from the floating objects that orbit the area, and to capture them you'll need to use Mistik’s scanner. In scanner mode, you have to visually track the rotating objects for around five seconds and then Mistik gains that particular sound. This aspect is really the only part of the entire experience that could be considered gameplay, and the hardest part is spotting the obscure distant objects that you have yet to record.

Other samples are found by merely walking up to the random items in the desert and watching a mini cutscene play out. Despite their brevity, these cutscenes feature good animation and bizarre scenarios. The style is good enough that it would probably be interesting as a series of animated shorts. Unfortunately, with no player interaction or context, that's effectively all they are. 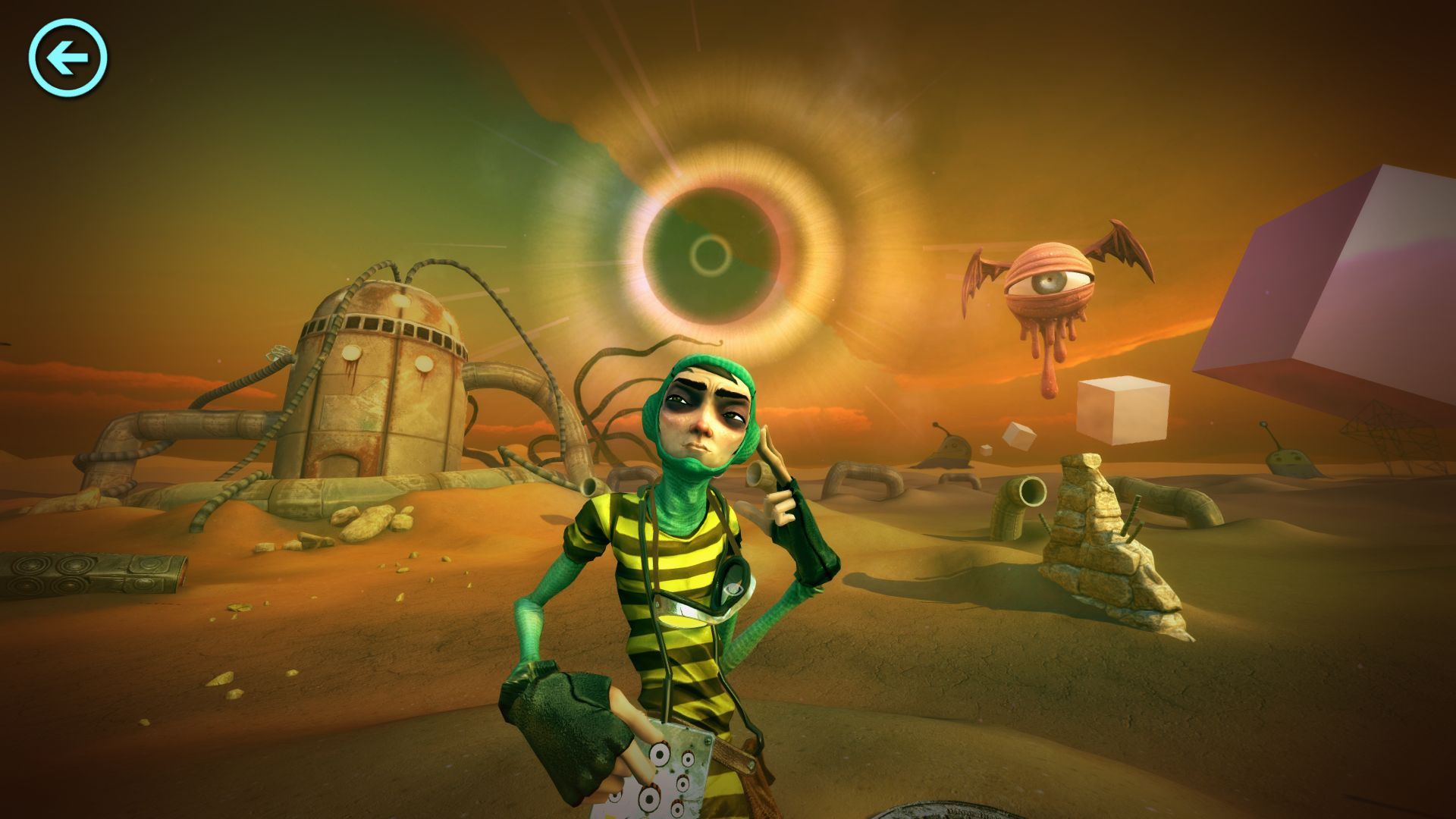 As you walk painfully slowly around the mini desert, some items can be placed in your inventory and are used help find sounds. Collect two drumsticks and Mistik will rock out on a sunken street lamp. A robot can be controlled to find some collectibles. After finding all the sounds, a bunch of these items appeared to have no practical use whatsoever.

As you find a sound, it is added to a mixer that can be opened at any time to make music. You can enable one sound in each group (there are 8 groups of 3 sounds) and adjust the volume to suit. In this way, you can make background music or just create something that makes you wiggle your hips in a seductive manner. Not many of the sounds are from traditional instruments—one is like the sound of breaking glass and another could be an automotive ratchet being turned—so the mixed result often sounded messy and grating. I tried many combinations, but most were horrible as background noise, forcing me back into the mixer to disable all sounds. The most tolerable combinations consisted of just a few samples, but the music seems to be more of an acquired taste. It was generally more pleasant to have no music when exploring... in a game about music.

To be fair, my musical talent is limited to destroying my eardrums by accidentally scraping a knife across a ceramic plate. Fortunately Beat The Game can show you how do to music properly in the final concert. Here you merely enable and disable sounds that are highlighted by the game. It's kind of like a QTE but much slower. It is best done with a mouse since the controller takes too long to enable and disable samples. The concert didn't sound bad, but it didn't seem worth the collection process. 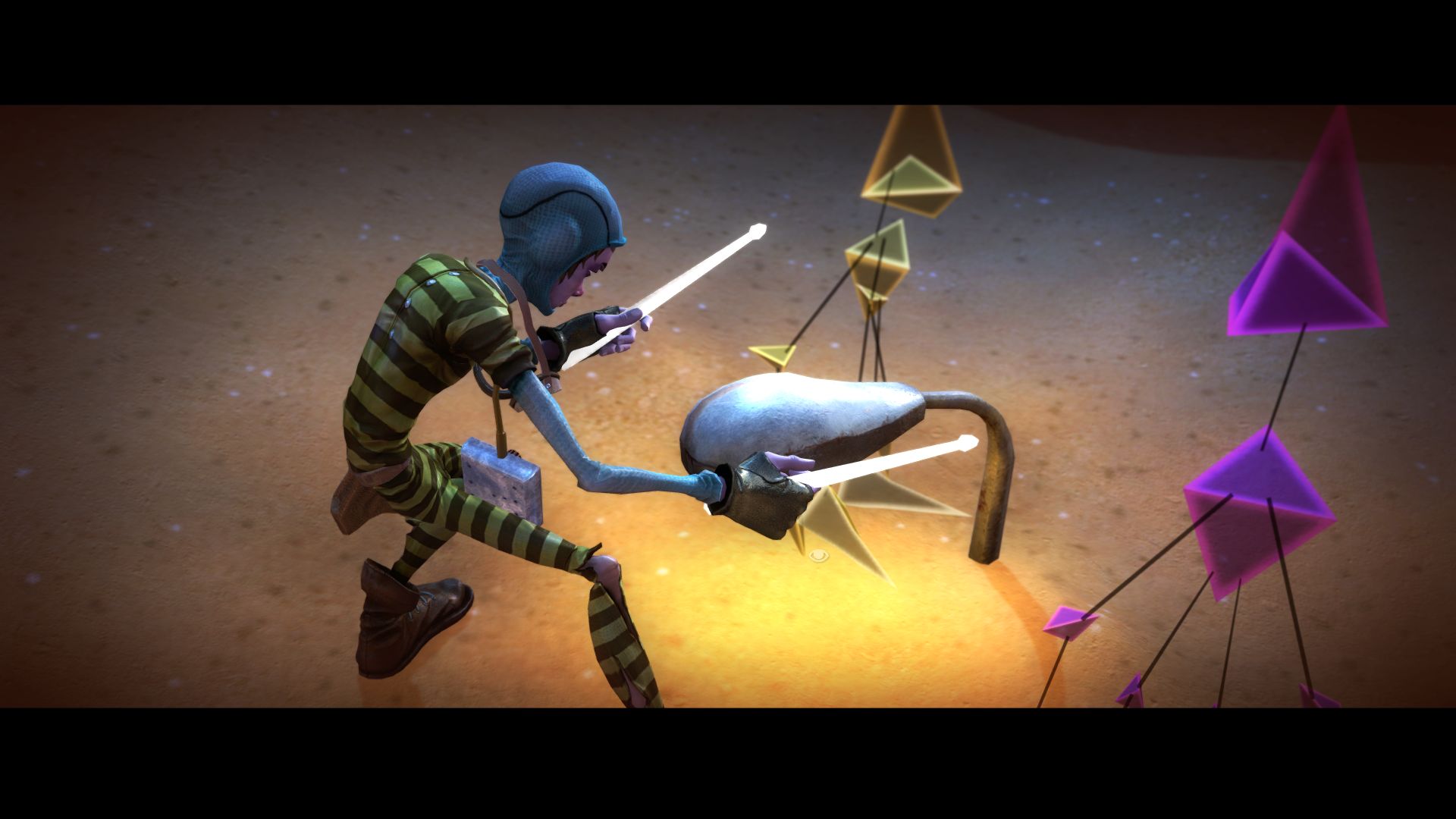 Beat The Game doesn't have enough in it to warrant playing. You’ll finish it in well under an hour and there is no reason to replay. Finding music in a tiny game space wasn't fun or involving, and watching a few well-animated cutscenes has extremely limited value. At best the experience feels like a tutorial or tech demo, rather than a full game, and it desperately needed something more involving. This abstract adventure might be worth trying for the musically inclined at its low price. Although people with actual music talent probably already have their own music-creation suite that is infinitely more powerful, and you won't have to walk across a desert just to unlock the samples.

Our ratings for Beat The Game on PC out of 100 (Ratings FAQ)
Presentation
65
Good animations in the abstract and short cutscenes. There is not much to the world but the visual style is nice. Music sounds were typically too discordant.
Gameplay
40
There is not enough substance. You scan orbiting junk and walk around to find sounds.
Single Player
20
There is no real story, just a random bunch of situations that unlock. It’s abstract and it takes less than an hour to complete.
Multiplayer
NR
N/A
Performance
(Show PC Specs)
CPU: Intel i5 3570k
GPU: XFX RX 480 GTR Black 8GB
RAM: 16GB DDR3
OS: Windows 10 Pro 64-bit

85
Technically there were no issues, although the adventure is monumentally simplistic.
Overall
47
Beat The Game does not feel like a complete game. You scour a tiny area and collect a bunch of unusual sounds for limited mixing purposes. A few well animated cutscenes are not enough reason to experience this extremely brief adventure. Aspiring DJs may be able to create something pleasing to the ear, but others will prefer the sounds of silence.