Rule with an Iron Fish Review

A competently made mobile game makes it way to PC

As the mobile market continues to grow, many independent developers are able to create their own success stories by building smaller but addicting games that are perfect for on the go. While their projects may get lost in the sea of Steam Greenlight and new releases (with hundreds of games being published daily on the digital distribution service), bringing their game to mobile often carries a higher chance of success. But once a game has an established audience, many developers do sometimes port their product to PC, in hopes of tapping into another market. This has been the case of Rule with an Iron Fish - a mobile game that released last year, which has now made its way to PC via Steam. While the core of the experience remains intact and has some charm, its mobile gameplay design roots and a slightly high price tag mean it's unlikely to captivate fans on the new platform. 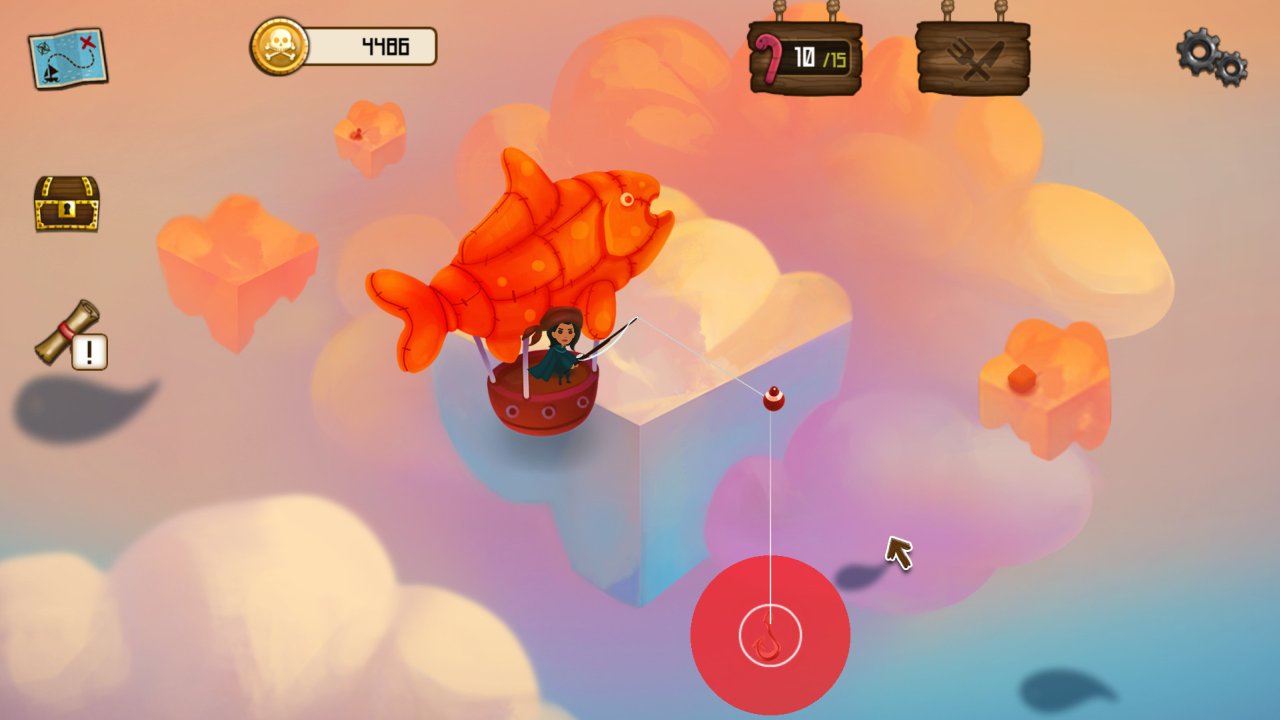 The game's odd title makes a bit more sense once you get into the adventure. Players assume the role of either a brother or sister with a last name Ironfish. They are shipwrecked, and whichever sibling you choose to control is the one that lands on an island along with a few pirate characters. From there, your goal is to explore as much of the surrounding area as you can, and hopefully save your sibling from the dangerous kraken that destroyed your ship. Through your adventure, the island will expand with a couple of different areas that house some newly arriving pirate characters. You can chat with them, and many will have quests for you. The text dialogue is very lighthearted and filled with puns and jokes, though after a while it becomes a bit tedious to click through all the corny lines just to get a quest added to your log. Quests come in two varieties, story quests and secondary objectives. Story quests typically progress the overall narrative and get you closer to finding your sibling, while secondary quests are optional. Regardless, almost all of the quests are simply asking you to fetch something - fish at a specific location until you catch the right item. As such, there's not much variety.

The core gameplay of Rule with an Iron Fish is all about fishing at a location. Players start off with a single island spot, and eventually new islands open up. The fishing screen is basically an isometric view of a small body of water, with some fish shapes floating about. You cast your line wherever you choose to click, and the nearest fish will try to take the bait. At that moment a UI circle will indicate when you should click to reel it in - basically a quick-time event that experienced players will be familiar with. Occasionally, the fish won't cooperate and you have to swipe the mouse in the indicated direction to successfully extract it from the water. There are over 150 water animals in the game, most being imaginary and they sometime have amusing designs. While you're fishing, the only thing you can discern in the water is the size of the fish - from small to large - and so you never actually know what type of fish you're about to catch. Rare fish appear for a limited time and glow, while electric fish will zap you if you don't have the correct rod line. Random materials also sometimes appear in the water, which you click on to collect. At the over five different fishing spots, some have special factors, such as a volcanic setting that will burn your line overtime, or deep sea that has lots of electric fish that requires a special hook. 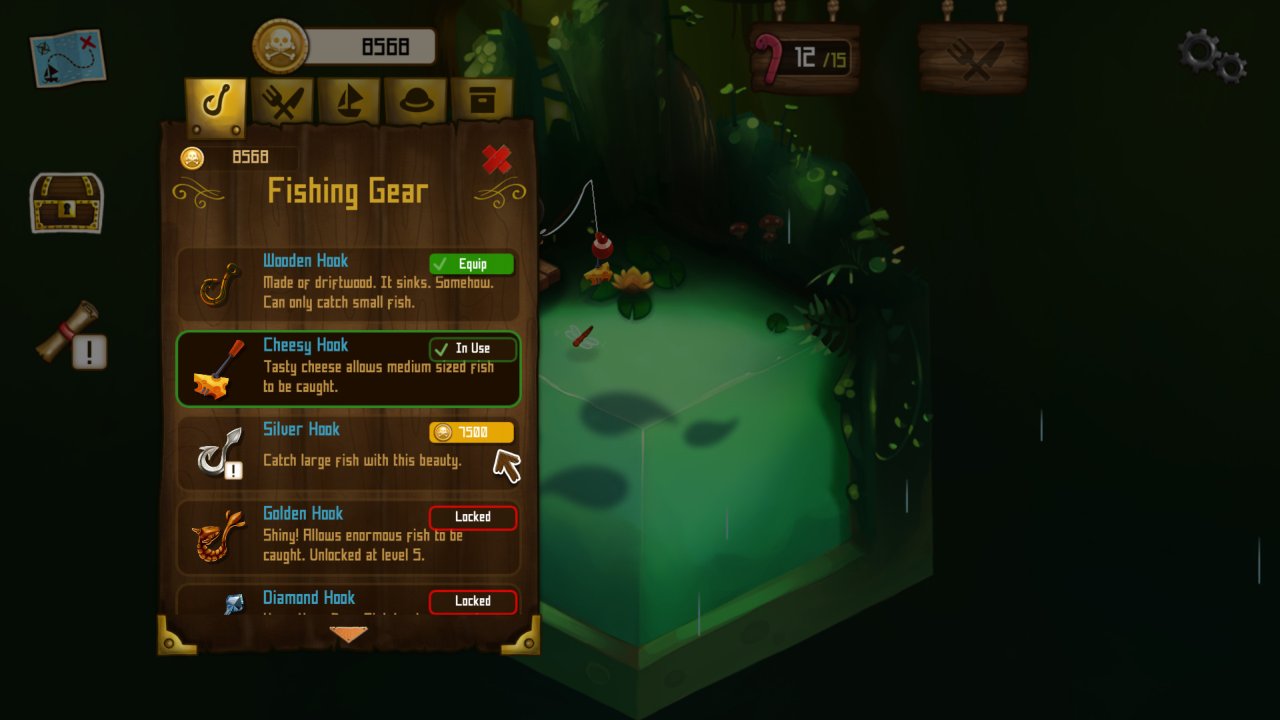 Another type of activity you partake in are sort of enemy encounters. Here, you and an enemy appear at the same fishing location, and as they try to catch something, you fling objects at their rod line to break it. They also use dynamite to blow fish out of the water, and you must click on all the airborne sea creatures to bounce them to your side and into your inventory instead. Later in the game, the enemy's rod line moves around and up/down, and enemy robots appear that must be destroyed before they reach your ship. These encounters are easy, there is no punishment for failing (it can be tried again), and it's rather repetitive. At least the rewards are solid and provide the only assured way to gather materials that you may need to build the next vessel.

Everything you catch nets you money, which you can then use to purchase bait, new hooks to catch bigger fish, different bobbers for income bonuses, and a few other passive perks. The rest of your cash can be spent on superfluous items, such as hats, pets, and so on. As the story progresses, to unlock new fishing locations you'll need to craft new ships using the materials you find in the water. It's all very reminiscent of typical mobile game progress, though of course without microtransactions. The flow of the campaign is decent, and you can usually unlock new islands with regular frequency - there are six in total, each with their own environment type. You can also grow your own food for special recipes, have an aquarium, a trophy room, and so on. Still, most of the gameplay boils down to fishing and enemy encounters, and the main story isn't particularly long.

As alluded to, the game does have a few problems. One thing that's a bit unbalanced is your character's experience progress. Despite fishing for quite a while and having enough materials and money, lots of items are simply locked away until you reach a certain level. This means you have to go back to the water and fish for a while just for experience, rather than because you need money. This also leads to a ton of quests being solved instantly, as you've already fished for so long that you have all the items that the characters want - and this means it's much faster to just scroll through all of the text without reading it, just to get your quest and then complete it right away. It makes the game's characters and quest system feel like an irritation rather than something you should care about. Lastly, the game's randomization also becomes an annoyance - many quests require you to catch a specific rare fish or find a rare item. But as you're at the mercy of the game, it can take an unreasonably long time for the needed fish/item to appear. 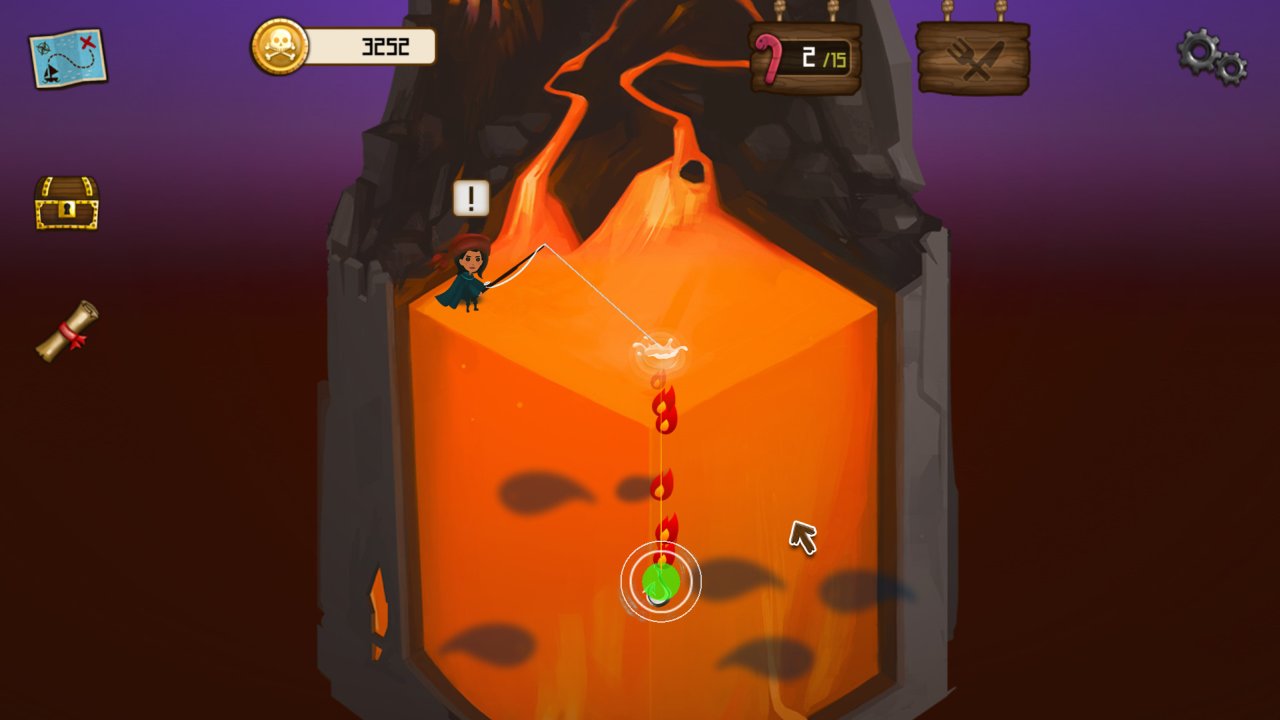 Much like the gameplay, the visual design is pretty much identical to a mobile game. While the map and some of the locations take up the entirety of the screen, the fishing spots are only using the horizontal center of the display. The menus are simple and straightforward, and easy to navigate. Visually the game looks quite nice, and its art style carries over from mobile without issues. The weather will occasionally change to rain, darkening the screen. The music is decent, but it becomes very repetitive and some fishing locations opt for no music at all, or have the same tune as other spots. Some additional tracks would have gone a long way to alleviate the already somewhat repetitive fishing gameplay.

Rule with an Iron Fish is a good port of a mobile game to PC, but its core gameplay mechanics don't really fit well with the experiences typically expected on this platform. Its multitude of mechanics and progress gating flow well for the most part (character experience level aside) and it has good variety and decent depth of content. But its mobile roots hold the game back a bit - the presentation and soundtrack leave something to be desired, and the fishing itself grows quite repetitive overtime; this wouldn't be an issue for quick bursts while on the go, but sitting at your PC and fishing for long periods of time just doesn't carry much appeal. Similarly, the quests are repetitive and don't really add to a narrative that feels engaging or worth following. If you're looking for something basic and relaxing to play on PC that you don't want to play on your phone for some reason, and are OK with the somewhat steep $10 asking price, Rule with an Iron Fish can probably fill that role. Otherwise, there are better games on PC to be had.

Our ratings for Rule with an Iron Fish on PC out of 100 (Ratings FAQ)
Presentation
62
The art and soundtrack are well made, but there's not enough variety and the fishing screens are simply blank on the sides.
Gameplay
68
Repetitive and easy as it may be, there is satisfaction to be had from successful fishing trips and completing quests.
Single Player
60
A mostly linear adventure that has a few progress snags that don't seem balanced with each other. Quests are boring and unrewarding.
Multiplayer
NR
None
Performance
(Show PC Specs)
CPU: Intel Core i5-4670K @ 3.80 GHz
GPU: ASUS Radeon R9 280X DirectCU II
RAM: 16GB DDR3
OS: Windows 7 Professional 64-bit

90
As a mobile game port, there are no issues. The expanded user interface works fine on PC.
Overall
65
Rule with an Iron Fish is a decent offering if you're looking for a mobile-like experience on PC and don't mind the price tag, with a focus on simple and repetitive gameplay with subdued presentation.

Rule with an Iron Fish 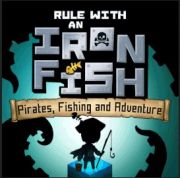