Who would have thought that a top down shooter, featuring hyper-evolved pandas opposing an army of hogs in a dystopian future, could feel so right? You need only look at the robust armor-sporting, heat-packing, upright-walking bears to realize that, at the very least, you’re in for an amusing ride. That’s not to say the gameplay is a-typical, however. Despite the cartoony and off-the-wall premise and characters, I did feel an instant feeling of familiarity upon jumping into this strange new world with my panda action hero. Skandivania Games’ indie rouge-lite Feral Fury essentially feels like your typical twin-stick action shooter; with some of Binding of Isaac and Smash TV influence in particular. And yet, thanks to the well-crafted mechanics, exciting action, and a zany backdrop that doesn’t take itself too seriously, the developers have illustrated that you can teach an old dog new tricks - or in this case, a bear. 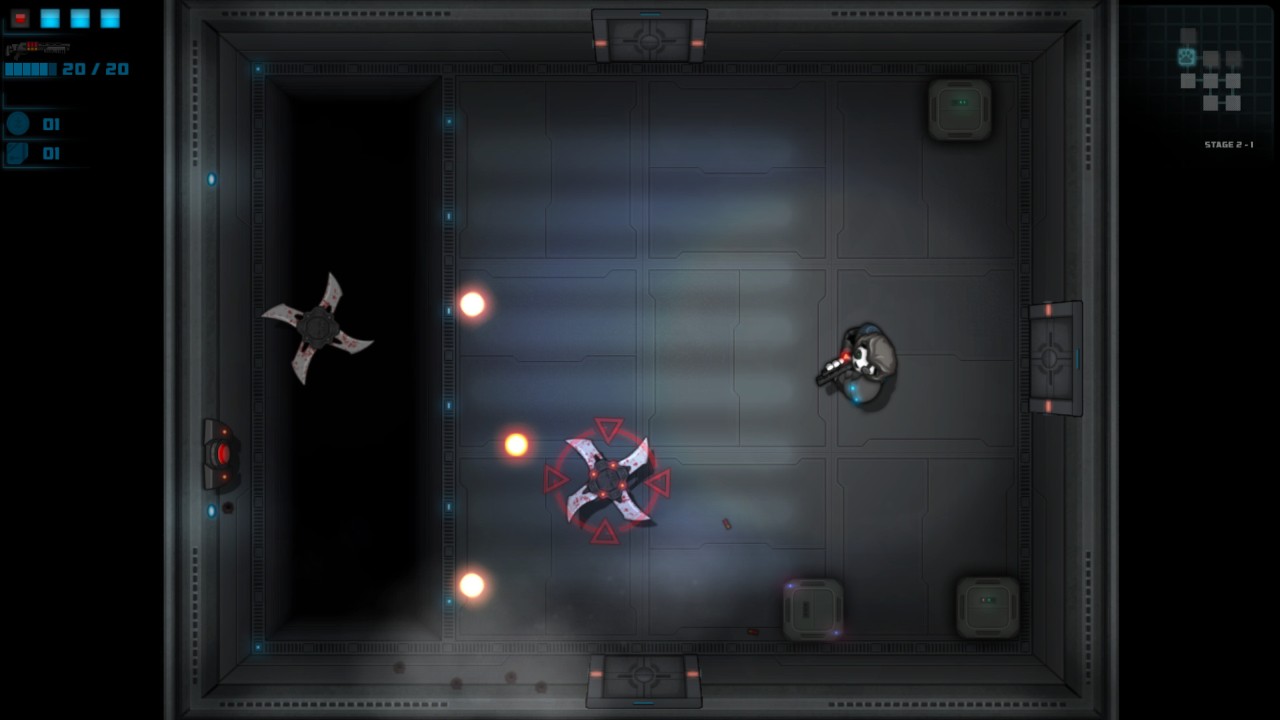 As you might expect, the plot is about as nonsensical and one-dimensional as you can expect from a top-down shooter starring panda soldiers. The game takes place in a post-human era where pandas have evolved to the point of engineering an interplanetary empire. Though apparently they’re not the only species to have climbed up the evolutionary ladder - as this empire has found itself at odds with the intimidating, large snouted band of hogs known as the Hellhog Horde. There are also a light smattering of foxes, and even an occasional elephant-man populating our world for good measure. Our mission? Push towards galactic domination and keep these menacing hogs at bay, which will “nurture the seeds of the great bamboo,” as we are informed by Admiral Pawgarr. Our unnamed panda soldier is called to action, and must fight his way through a series of randomized dungeons with plenty of sci-fi decor and industrial flair.

During our mission we find ourselves running and gunning through clusters of interconnected rooms featuring a myriad of projectile-firing enemies. Weapons range from assault rifles to flame throwers, and can be collected through destroyable crates, or purchased at randomly placed shops with coins; though we always default with a less-than-impactful pistol. The game does manage to redeem this meek tiny gun by allowing us to duel wield these little guys, at least. Enemies primarily come in the form of giant mechanical insects, as well as more imposing hogs that can sport some heavy artillery themselves. All of these foes range in both strength, weaponry, and behaviors; the memorization and mastery of which goes a long way in maximizing your odds of survival. Upon entering a room crawling with baddies, all doors in the room will shut, and won’t reopen until you’ve cleared the area. You even have the chance to get locked in and “ambushed” upon revisiting old rooms, which means more powerful enemies will appear in a room you’ve already cleared. The game plainly discourages evading danger and simply making a b-line to the end portal. You won’t want to leave many stones unturned anyway though, as rooms sometimes contain stat boosts, such as greater speed, more critical hits, and HP increases. Once destroyed, each enemy will give way to annoying explosive flairs that ripple outwards, which can be equally hazardous as gunfire and must be avoided. This forces you to stay on your toes with greater frequency than you might expect. 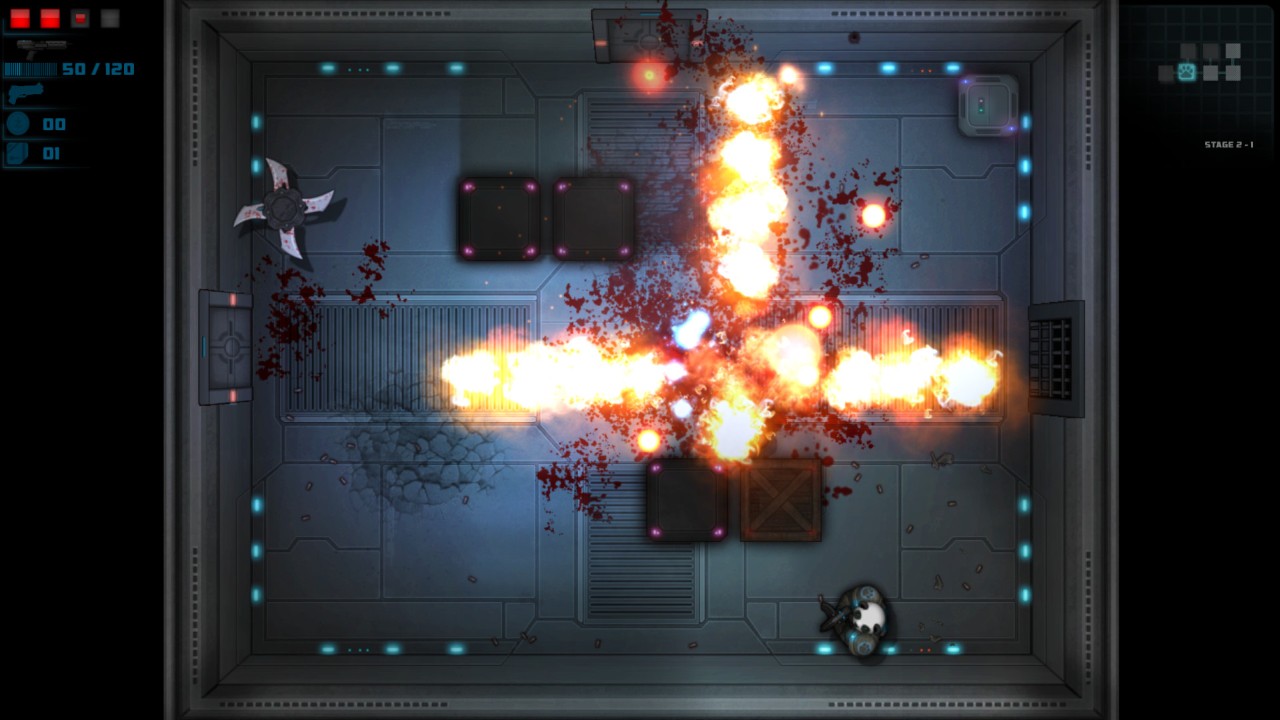 There are also a myriad obstacles dispersed within many of the rooms, making a damage-free skirmish against enemies all the more tricky. You’ll often need to watch your step and dance around a minefield of hazards within a confined space while gunning down baddies. These obstacles include laser firing drones, flame spewing nozzles, spikes, and explosive orbs. In my experience at least, these hazards often prove more deadly than the enemies, especially when it comes to explosives. In fact - during my attempt to nitpick through an otherwise excellent experience, the power and frequency of explosives is really one of the only aspects that came to mind. This is where rolling around like an idiot comes in handy, as this ability will not only help you evade incoming gunfire or lasers, but will give you a quick escape from dangerous explosions nearby. When catching fire, this move is also effective in quickly extinguishing it, and it just might save your life in the process. The controls in general serve their function well with their simplicity and tight mechanics; not just with a gamepad, but even with the usually more clunky keyboard and mouse setup. There are occasional moments where I lost my cursor in the heat of battle, but the vast majority of the time, aiming and shooting with the mouse felt sharp and was simple to pull off.

Despite its inviting pick-up-and-play nature, Feral Fury contains some rougelike elements and grueling gameplay that may deter some people. Indeed, the game can really be a grind in the early goings, and may lead to some repetitive moments after being forced to start from the beginning so often. And because of the randomization, a certain degree of your success will depend on luck, but rarely to the point where it resides over skill and progression. While it’s true you will probably have to run into several annoying deaths before completing the game even on normal mode, there is a nice balance in difficulty and progression.

The biggest, and really the only form of long term advancement is “orbs,” which can be cashed in for permanent upgrades, abilities, and additional keys to unlock secret rooms. Thankfully, the orbs you’ve gathered can be retained even if you fall short of completing the game’s 4 level run. Once I took my lumps and used enough orbs to sufficiently beef up my character, I was able to power my way to the end without too much struggle. Though my super-powered minigun that I was lucky enough to stumble upon deserves much of the credit during those successful runs. 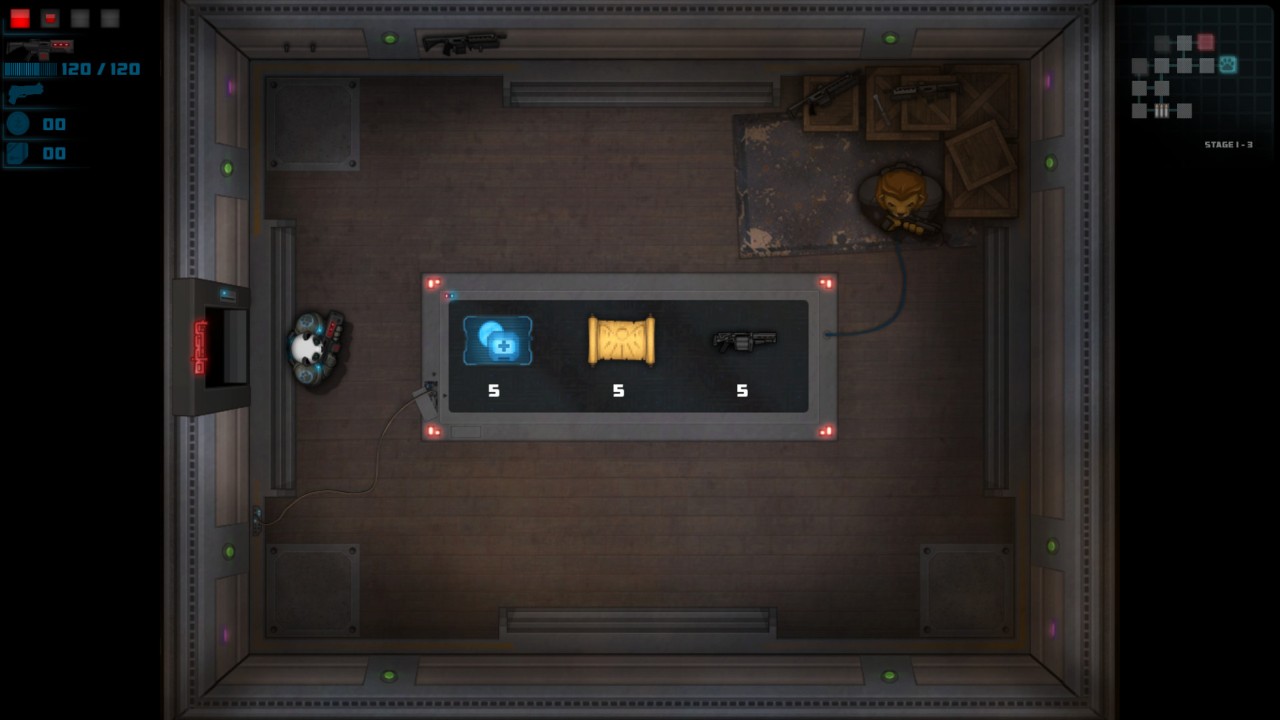 Upon beating the game’s normal and hard mode, in addition to opening a portal by obtaining a number of talismans, you’ll be gifted a few secret characters. These comrades are as follows - a more powerful panda wielding a shotgun, a fox that utilizes a pulse rifle, and a super-powered hog soldier. Each one provides a subtle new dynamic that mixes up the experience a bit, but they don’t offer much outside of that. Their default weapons are powerful and come with unlimited ammo which is helpful in battle, but they also run on temporary HP; meaning once damaged, you cannot recover. This unfortunately tends to offset their offensive prowess somewhat. Still, they are fun to try out if you’ve grown tired of your pistol-packing panda.

Now that we’ve established the quality of the gameplay, what of the amount of content? Well, it’s a bit lacking to be sure, though for an indie title that is roughly the price of a typical lunch at Taco Bell, it’s more or less expected. Each of the four stages (5 in hard mode) contain 3 sub levels, in addition to a randomized boss. Runs can range greatly in length - depending on how many rooms each level contains, and how soon you’ve located the main keycard to unlock the door leading to the portal. Though, even a more elaborate playthrough can be finished in a couple of hours at most. There’s unfortunately no co-op multiplayer or online mode to speak of either. Of course, in typical roguelike fashion, the game expects to you die a great deal, and chances are it won’t be wrong.

Thankfully, even after burning through all three difficulties and obtaining each of the unlockable characters and upgrades, there is a constant source of replayability in the form of “Daily Run” mode. This feature drops you into a situational scene, tossing a few randomized items and/or upgrades at you, as well as a gameplay-hindering curve-ball known as a curse. These can range from stronger enemies, to a greater number of rooms, to forced movement at all times or else you lose HP. Once you’ve been killed, your run for the day will end, and you will be given a score to compare with others on an online leaderboard. The gameplay is limited here, as you are only granted one playthrough each day. However, it’s a nice little addition that can provide a minor incentive to sneak in a 10-20 minute session long after you’ve mastered the main game. 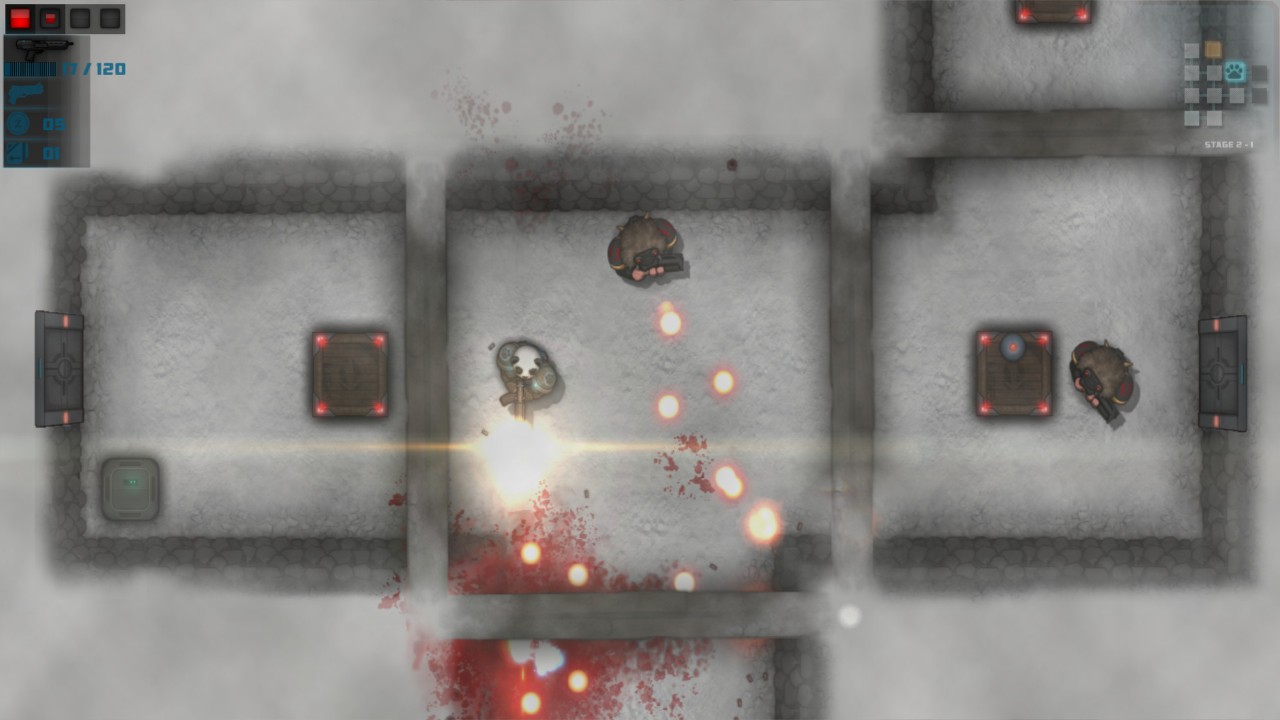 The graphics and art style don’t do a ton to stand out, but they work fine for this type of game. Pseudo 16-bit sprites - and an industrial atmosphere combined with slick sci-fi containing plenty of blues and greys - comprise the visual makeup of Feral Fury. There are plenty of cool explosion effects and falling rain throughout that add a nice visual touch as well. The sound design is spot on, and the music meshes nicely with the intense nature of this shooter. It’s nothing particularly catchy or deep, but the palette of fast-paced tracks meshes well with the gameplay. They sound roughly like “action movie meets 16-bit gaming,” and help keep the pace of the game flowing with their constant pummeling of techno-esque beats.

Fatal Fury’s post-apocalyptic panda future will paradoxically transport you back to the SNES age, and should satisfy the itch for many fans of pure, old-school shooters. It offers a goofy premise to help inject a degree of ingenuity to draw your attention, but more importantly, it contains some tried-and-true action gameplay and solid mechanics to back it up. It’s just a bummer that there isn’t more of it to enjoy with our panda protagonist.

Our ratings for Feral Fury on PC out of 100 (Ratings FAQ)
Presentation
75
A charming 90’s vibe along with some science fiction themed aesthetics make up the look, sounds, and feel of the game. It’s nothing groundbreaking, but it works, and doesn’t succumb to an overdone, overtly retro style.
Gameplay
82
Aside from somewhat liberal usage of explosives and their overpowered nature, the gameplay is stellar across the board - progression is balanced, and the difficulty level hits that sweet spot overall.
Single Player
78
Not much of a narrative, but the fun premise and colorful cast of unique animal characters makes this largely unnecessary. Light on content, though randomization and Daily Run Mode help fill this void.
Multiplayer
NR
None
Performance
75
Once in a blue moon I’d get a white screen on startup, and there was occasionally a bit of slowdown during the 60fps mode in the rainy outdoor portions, which even for my laptop was surprising. Overall though, the game ran smoothly, and virtually free of bugs and glitches.
Overall
80
Feral Fury is a fun little pick-up-and-play shooter that serves its function quite well. It feels at once familiar in its gameplay, and fresh in its cartoony overlay. 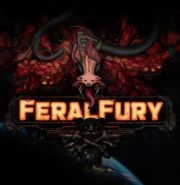