Are we ready to rock yet?

We’ve all had that dream, I’m sure. After months of tireless drafting and relentless rote-rehearsal, the final words of your graduation speech are finally ready to enter the public consciousness. You eagerly await your name to be called. You step shakily up to the mic. All chatter dies down. And just as you open your mouth to boom the best darn thing since I Have a Dream, the mic freaks out, the speakers go haywire and the lights spontaneously-combust. Everything goes wrong. And then you realise you forgot to wear pants. 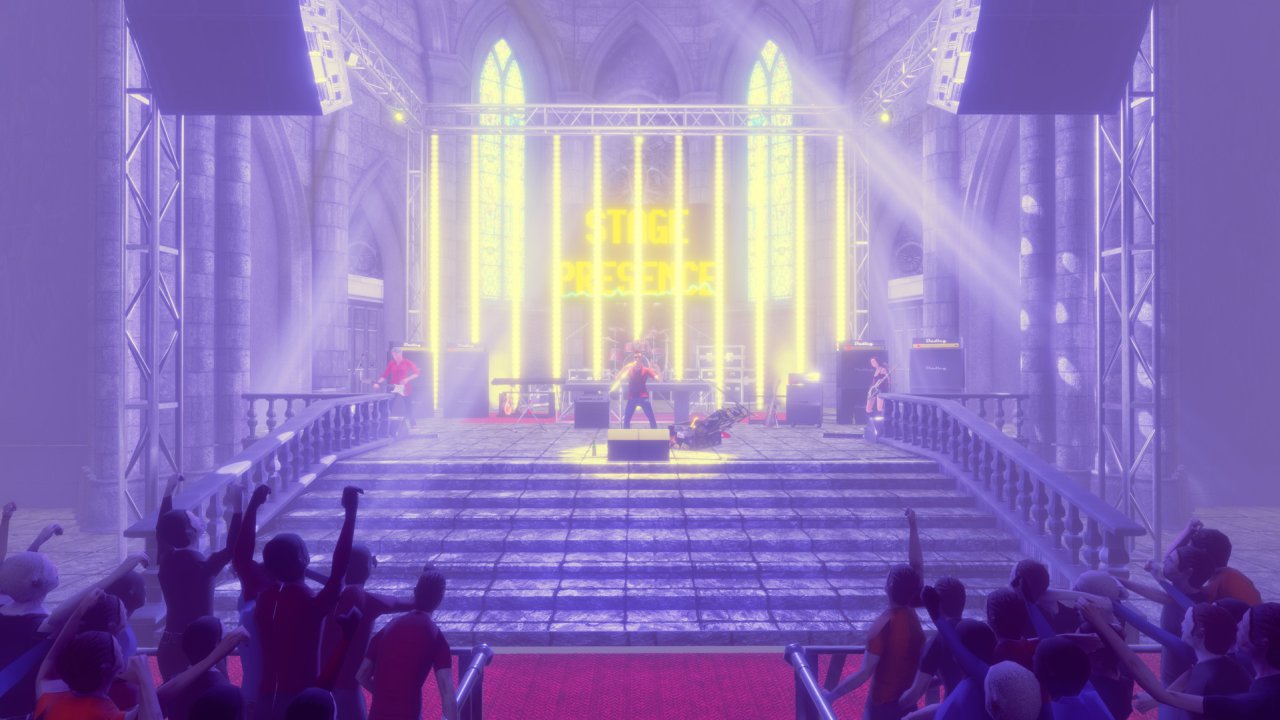 If you’re one of those frightening superhumans never to have experienced stagefright, I’ll try to elaborate. Ever seen that Power Rangers episode where Billy creates those cool VR-goggles that simulate a rollercoaster ride? Switch the kart for an empty stage and the rush of falling with a foot-tapping audience and you’ve got Stage Presence. Except the effect feels less ‘whooooooa!’ than it does ‘why am I putting myself in this situation?’

You begin as a roadie on-tour with one of the biggest bands around. The venue’s cracking, the décor’s lovely, and buzz for the ensuing show is palpable. After technical issues ensue and the show inevitably begins to go southward, you’re swiftly plonked in front of a mic and told to keep the audience warm. Make something up, you’re smart. By now, I had a pretty solid idea why Stage Presence is billed as ‘comedy-horror-karaoke’, because the concept of improvisation in front of a crowd rapidly losing interest was invoking uncomfortable visions of secondary school – and not in that precious ‘oh, to be young’ way.

This said, the use of the PC’s mic is where Stage Presence feels most original. As opposed to using physical orientation or control-commands to succeed, the bulk of Stage Presence’s progression relies on the player’s vocal quality. ‘Vocal quality’ doesn’t necessarily mean matching your voice to specific notes, or abiding to a given track, however. After shuffling your way to the mic, you’ll be commanded to ‘sing’. The rest of the gig then unfolds per a selection of on-screen prompts, with the audience guiding the pitch, level and volume of your attempts to entertain them. If the crowd decides you’re shouting, they’ll complain they’re being deafened; if you’re a mumbler, they’ll tell you to speak-up. If they’re really forming a vendetta, they’ll begin collaborating to foil your attempts at winning them over by blinding you with laser-pointers and lobbing half-empty Pepsi-cans at your bumbling, gig-stalling self. This is where playing in VR (and, provided you’re not particularly vulnerable to stage-fright, doing so is recommended) really aids Stage Presence’s pressurising premise; the lurid palette and relatively-basic animations can thwart the immersion somewhat, but after feeling so aggressively put on the spot before a mass of insult-hurling jerks, I found the game’s graphical infidelity almost became some bizarre emergency cannon-fodder for rebuking my hecklers. Not that I’m bitter. 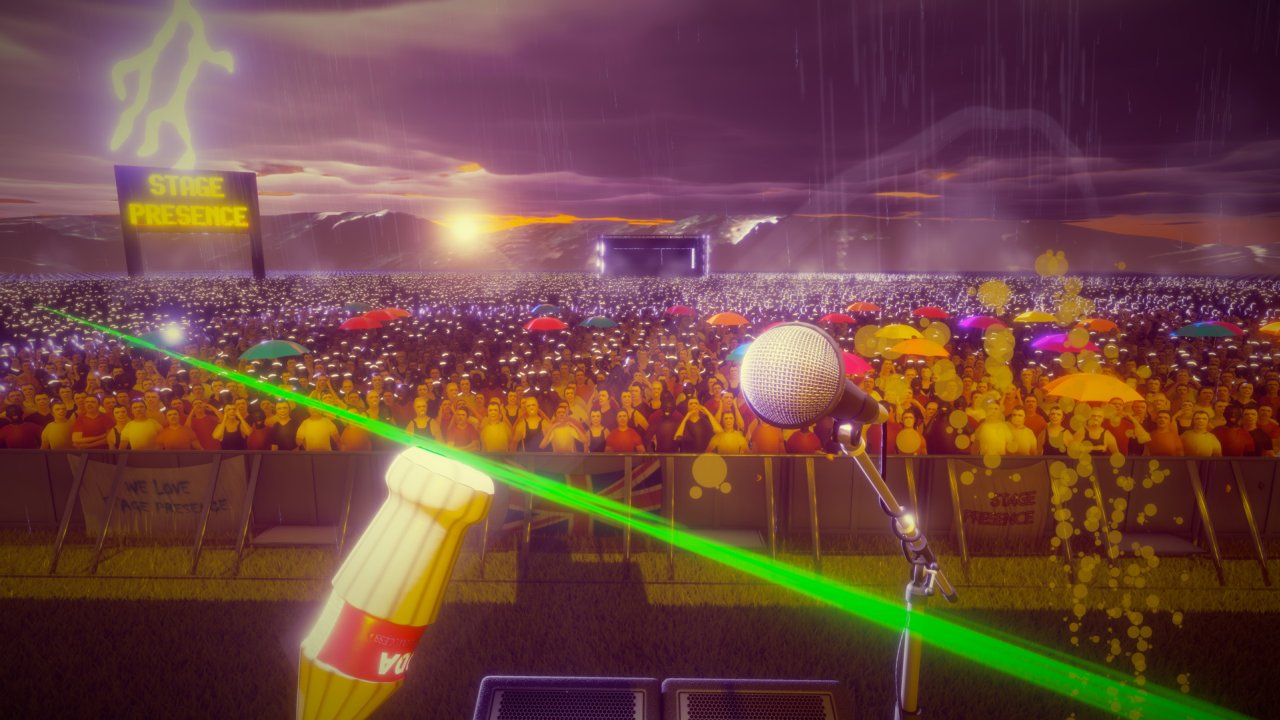 Oftentimes they’ll get sick of the register you’re using, so you might find yourself erring into falsetto-territory once in a while. If you go in expecting to blow them away with a Whitney Huston classic, however, I’ve got news for you. You’re not really required to sing at all. You could just opt to deliver a dramatic reading of your laundry-list or begin launching insults at the crowd instead; stage presence is determined by volume and pitch of your voice, so you needn’t worry about abiding to backing tracks or harmonising with instruments. In truth, it’s sort of fun to abandon singing completely, in pursuit of sparring with hecklers, though only in the way that your constant need to adjust vocal volume and pitch can render your smart-aleck comebacks utterly laughable. Playing on easier difficulties will generally allow you to be more extreme in the ways you accommodate your audience’s wishes, while harder modes will require a little more nuance to your vocalisations to avoid getting booed off-stage. As a general rule, however, you can most likely expect your early masterpieces to waver somewhere between an irate Morty Smith, and an inebriated Mr. Blobby.

Abiding by the audience’s wishes fills your ‘stage presence’ bar, and thus allows you access to the next venue. Equally, unhappy audiences see your bar deplete, with their dissatisfaction exuding from the mosh-pit below in the form of displeased skull icons. Your performances also gain you cash, which you can use to purchase various items to fun-up further gigs. Many items can only be used within specific venues, so you’ll often need to win audiences over in prior sections if you want to pull a Who with one of your guitars later on. While some items are specific to gaining stage presence though, other such purchasables as ‘mystery pills’ are the equivalent of a toxic lucky-dip. Their effects are various, and grinningly inventive, stretching anywhere from increasing difficulty by assaulting the player with laser-beams, to causing the protagonist to vomit copiously and colourfully over their enraptured (or quite possibly enraged) spectators.

Yet, oftentimes it felt that the VR-gimmick was merely acting to mask otherwise repetitious gameplay. Even then, the novelty wears thin. Sure, those first few gigs proved thrillingly pant-cacking ordeals (something I’ll assume is the intention here), but after a few rounds of stepping up to the mic to keep the audience interested, the experience quickly ground into a cycle of ‘sing, sing louder, sing higher’ until your presence bar is filled. Sometimes I whacked out a flare for good measure. They seemed to like it. 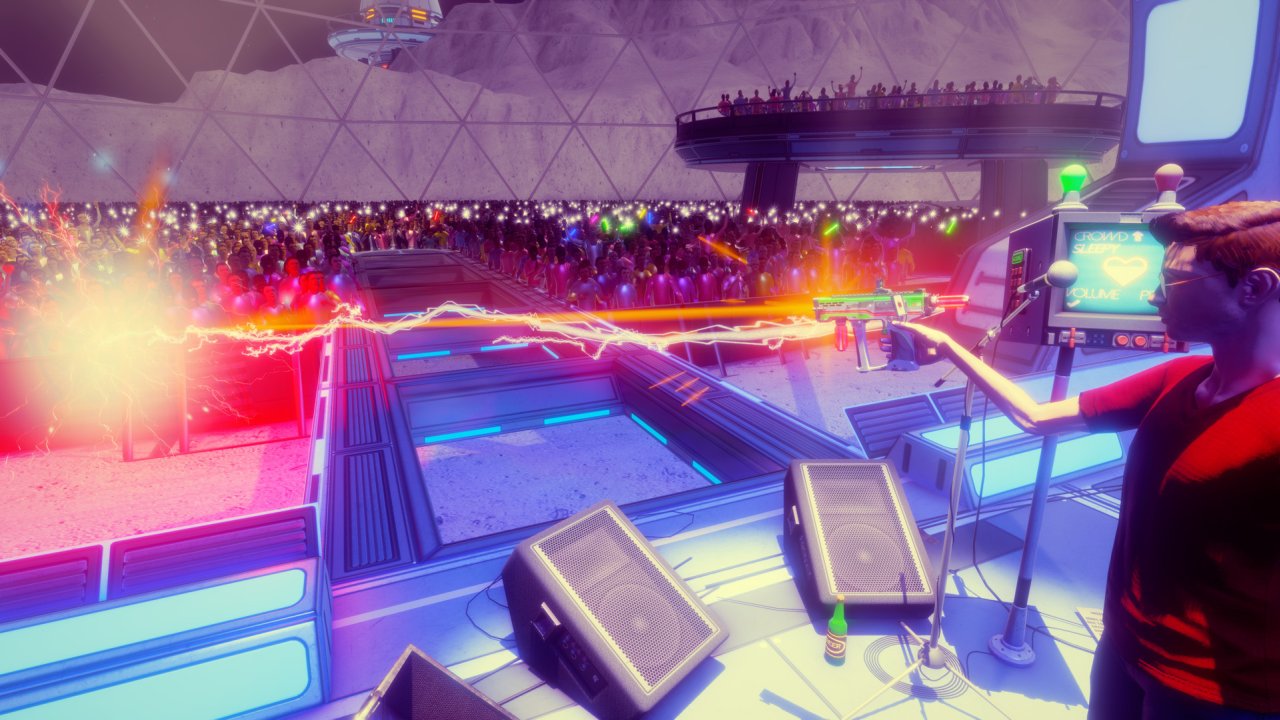 Multiplayer, unfortunately, does little to spice things up. No harmonising here, I’m afraid; for Stage Presence instead allows players to assume the role of the audience, either cheering on the shmuck behind the mic, or attempting to foil their efforts with various odds and ends. Similar to the items purchasable to buff the player’s presence during the campaign, audience members carry their own means for sabotaging their efforts. The inclusion of a local competitive mode might’ve been interesting here: allowing players to vocally compete to win over an unruly crowd could well have aided the game’s longevity as a party-game, but both its strictly-online capabilities and lack of variety make coming back for another round more effort than it’s worth.

Of course, once I’d had my fill of having bottles chucked at your head by real folks instead of the game’s AI, I could always invade other players’ gigs to have my biting revenge or compete with online leaderboards to become the top-ranked gig-staller of them all, but like the repetitive campaign: after a few rounds of fun-laser-pointing and hurling suspiciously-yellow substances, the joys of sabotage (even more so, the cheering on) becomes... well a bit of a chore. Hard to believe, I know.

Placing the player in a situation associated by so many with knee-knocking trauma strikes an odd premise for a light karaoke game, but I’ll be damned if the first few rounds of Stage Presence didn’t keep me engaged. Bu the game quickly descends into a brusquely-humoured form of flood-therapy; the thrill of initial stages subsides into repetition, and throwing in a host of hilarious gag-gifts doesn’t do much to compensate. I suppose there is another plus side, though: if ever I’m ever encountered pantless during a make-or-break speech, at least I know I’m prepared for every ensuing eventuality.

Our ratings for Stage Presence on PC out of 100 (Ratings FAQ)
Presentation
70
Character and set design aren’t cutting-edge, and animations might throw immersion-pursuers off, but the game’s gaudy neon palette and the sheer chaos of your audience’s distractions serve Stage Presence’s humorous karaoke-parody well.
Gameplay
63
Centred around the player’s interaction with the PC mic, Stage Presence’s emphasis on player-improv in the face of a disproving audience strikes inventive. Once the novelties of pseudo-karaoke have faded, however (and you’ve had your fill of pill-popping) the experience is dulled by just how repetitive each area transpires to be.
Single Player
60
Once the experience of being put-on-the-spot before an impatient audience wears off, progressing from area to area can feel repetitive. Unlockable items are a laugh to toy with, but they’re an ultimately flimsy distraction from its samey objectives.
Multiplayer
50
While switching standard heckles with online chats can contribute to the game’s cruel humour, the thrill of sabotaging another player online as an audience member is an ultimately ephemeral one. Online leaderboards can be fun to rally against, but due to the largely samey objectives, getting to the top feels something of a wasted effort.
Performance
(Show PC Specs)
CPU: Intel Core i7-4710HQ @ 2.5ghz
GPU: Nvidia GeForce GTX 860M
RAM: 8GB
OS: Windows 10 64 bit

70
Assuming your PC is VR-capable, you shouldn’t run into anything dire, though minor hiccups occur every so often. It’s perfectly possible to play without a headset, but given the games reliance on submerging players within an uncomfortable setting, it might be difficult to experience the full effect of the game outside VR.
Overall
61
Stage Presence combines mic-improvisation with the immersive givens of the headset to deal a gut-punch of stage fright. Outside that momentary thrill, however, it's a noticeably mundane gig: if conquering one's fears means facing them head on, then Stage Presence unfortunately sets itself up to grate after its first few objectives.