Tapping and turning at incredible speeds

There's no shortage of games that allow you to interact with music in various ways. From traditional experiences like Rock Band and Guitar Hero, to more arcade titles like Audiosurf, Rez Infinite, and Amplitude earlier this year. And while that's all well and good, those games mostly focus on letting players listen and enjoy, or tweak the sound as they go along. But if you wanted a more challenging experience, one that almost seems inspired by DDR, you may want to check out the recently released arcade game Thumper. Described as "Rhythm Hell" by debut developer Drool, it will test your reaction time like few others do. 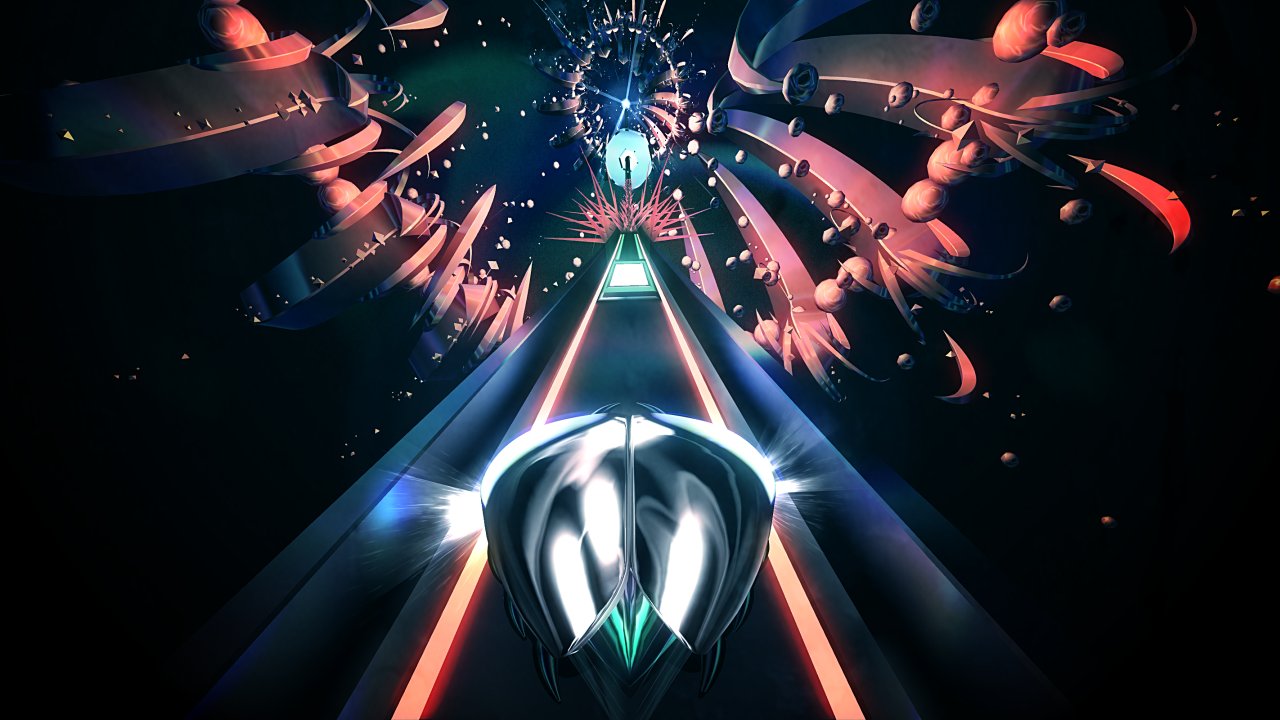 Thumper is a simple game in its nature. You control a futuristic space beetle of sorts, as it's traveling rapidly down a single lane corridor. The controls are simple - the X button is used to initiate a burst of sorts, and the left stick is used for direction of your movements. Using these two inputs in combination is all that's required to beat the game. On the track, you'll find glowing pads which you may "thump" on by simply tapping X. There will soon be corners, and you must hold X and turn in order to pass them; obstacles will also begin to appear in your way, which can be broken through by holding X. There are also occasional impassable debris which you must fly over, by pressing X while holding Up. After your short flight you can press down and X again to thump the pad that usually follows the debris. The gameplay is simple and straightforward.

But the reason that Thumper is a highly challenging game is because of its speed. Things start off easy enough, with plenty of seconds between interactions, but as the levels increase in difficulty you'll be faced with multiple combinations of turns, thumps and obstacles in a row. Managing your turns and pressing X (tapping vs holding) is essential. Oh, and you only get one life - it's okay to crash into a corner or object, but don't do it again until the next checkpoint, otherwise you must restart the section. This is good design - as challenging as the game is, the levels can last as long as 30 minutes (and there are 9 of them). But each is broken up into multiple sub-sections and if you fail, you can simply restart from that section of the track. So, despite the many failures you'll experience, there is relief that you're not really starting the whole level over. If you just want to survive through the level, players can keep holding X the entire time and just worry about turns and jumps, ignoring thumps and destroying obstacles automatically. The game occasionally offers bonus thumps, such as if you've completed a section perfectly, which can restore your life (or give you extra gems if you're not damaged) .

Players wanting to set a high score on levels and put up good leaderboard scores, will need to hit every thump pad, time every corner turn, and so forth. You get bonuses for things like completing sections of the track without taking damage, not missing any thumps or blue gem collectibles, and executing perfectly timed turns. There's also a score multiplier that keeps incrementing if you manage to avoid any damage and keep perfecting all inputs across the level. 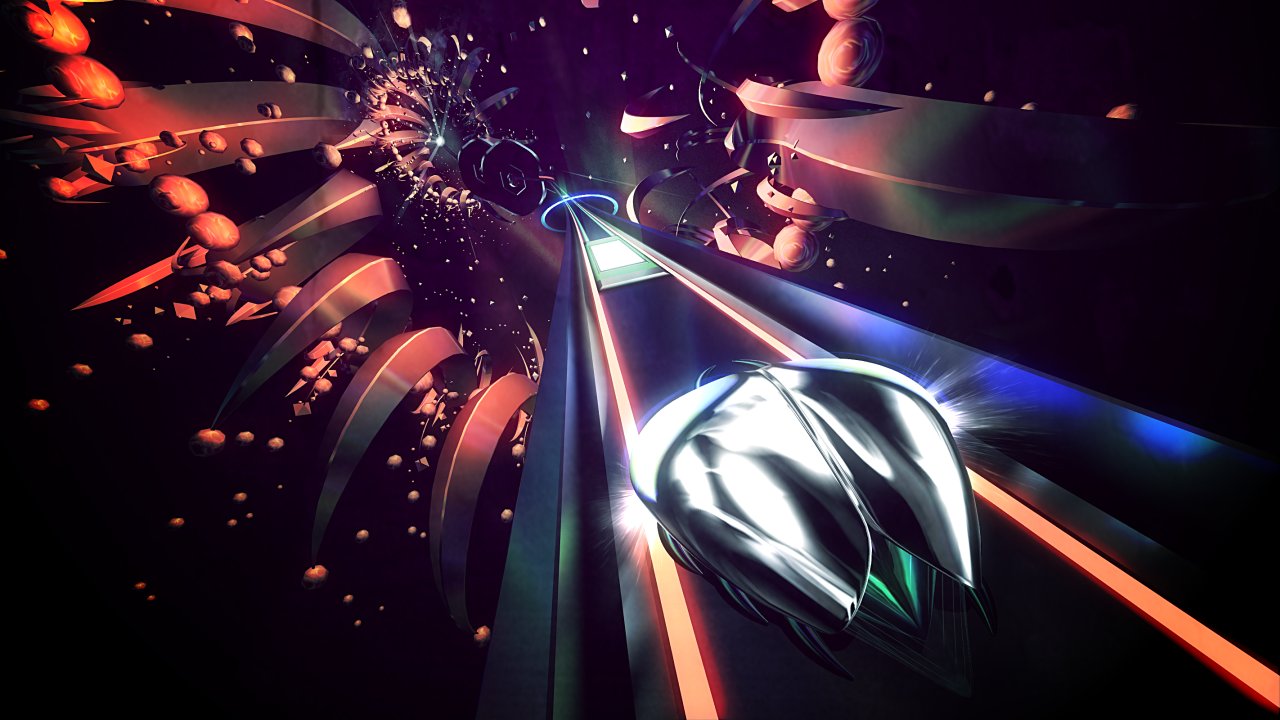 Things escalate further as you make your way to the boss stages. There are a couple of bosses in every level, and the final level boss is usually the one to really push your skills to the limit. Bosses act differently from regular levels, and are more challenging in their own way. The game essentially loops the same section of thumps, obstacles, etc until you get it perfect, which then reveals a special glowing thump that is used to damage the boss. This process repeats a few times until the boss is defeated. The added pressure to get through without dying while also hitting every possible thump is immense, but yet because the game loops the sections you can eventually learn what the sequence is. The same goes for the rest of the game - it's static, so if you happen to crash on a particularly tricky set of corners, you can always plan ahead next time and be prepared. There is no randomly generated and unpredictable level design here, thankfully. Still, in boss levels there are no checkpoints and you still have only one life to spend, so it can be frustrating if you're stuck. No difficulty options, either.

The rest of Thumper continues along this hellish, fast paced projection and escalates difficulty with each level. Soon, the road you're travelling on expands, forcing you to move left and right to hit thumps, while also keeping an eye on the upcoming barricades as you're forced back to a single lane before too long. Bosses may gain protective barriers that must first be defeated by a series of consecutive jump/thump down attacks, again perfectly executed otherwise you must start the whole thing over. And even later levels introduce punishing lasers that attack you if you miss a thump.

While the controls are simple, it sometimes felt like the game didn't really register the inputs, particularly with hitting vs holding X. It seemed as if the DualShock 4 isn't really meant for a game with such extreme intensity and demanding response times. Turning/switching lanes also occasionally felt sluggish, whether using the stick or the D-Pad, and it almost felt like an R1/L1 option could have been beneficial. Perhaps this is the frustration talking due to the escalating speed and difficulty of the game. 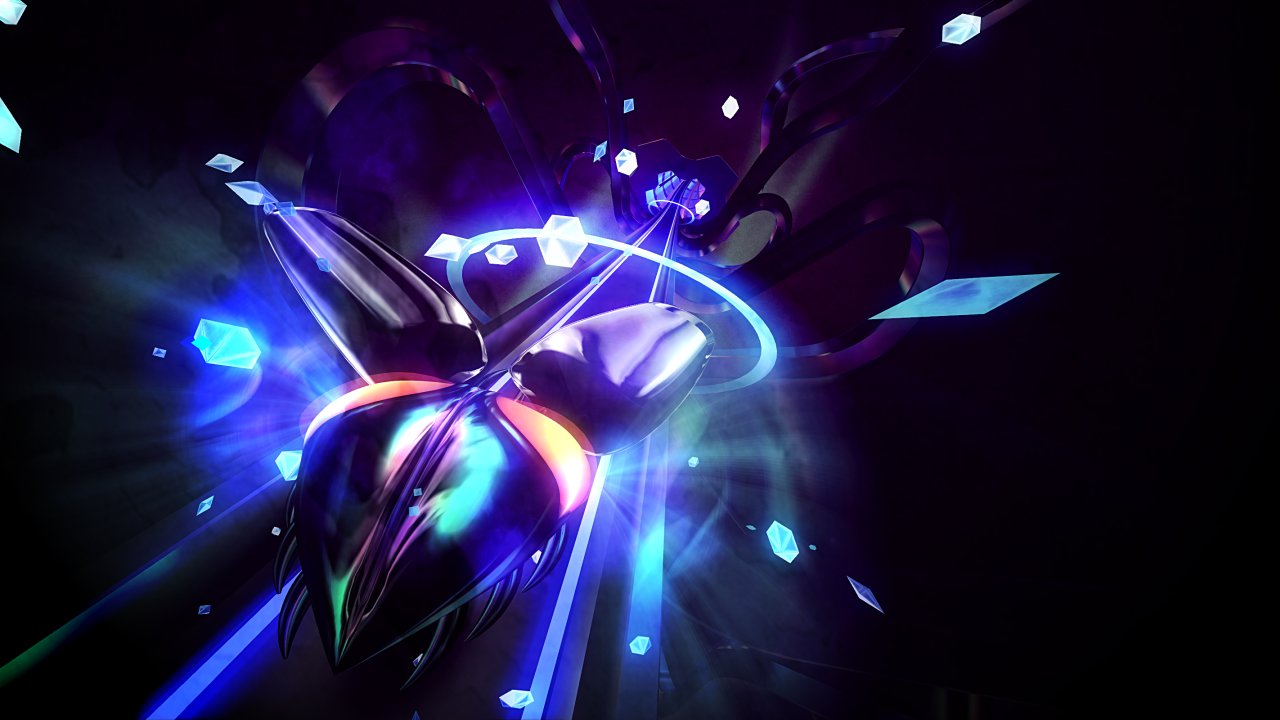 So clearly, Thumper is very different from the traditional music games of this sort. It's geared towards extreme difficulty, and it's also not too concerned about the music itself. The entire game features a techno-beat soundtrack, but it feels more like background music than making your way through a song. There aren't really any nuances nor does it build up to crescendos, you're just blazing along to a beat and doing well or poorly doesn't affect the music. Sure, the gameplay sounds (like crashing through obstacles, hitting thumps and corners) occasionally produce a secondary source of effects that lines up with the tune, but these don't really add any more depth to the music.

The sound design matches the game's futuristic visuals, with various effects often resulting from your actions, while the track itself bends and twists along the screen. The backgrounds often have abstract dream-like visuals. While it looks nice, the special effects often add to the already punishing difficulty, as you can only see so far ahead, and some effects are clearly meant to distract, like orange waves along the sides of the track that blend together with the color of the turns. Thumper can also be played in PS VR for a more immersive experience, giving players another dimension to enjoy and suffer in. The experience isn't much different in VR, and the reduced visual fidelity (like in Rez Infinite's Area X) is a bit noticeable. However, to avoid motion sickness, the track has far less sway. Compared to the normal 2D gameplay, using PS VR actually makes the game slightly easier as it doesn't try to throw you off by shifting the track from your center of view.

Thumper does indeed live up to its ambitions. The sound design isn't really that good, with the songs acting more as a background to the action on the track, to make this a music-rhythm game. So instead it's just a fast reaction game that stands out thanks to its focus on the simple yet increasingly difficult gameplay. The controls are straightforward and the design is sound, but rapidly increasing speed and punishing obstacles will prevent most players from making it to the end, especially with the perfection-demanding boss encounters. That's not to say the game doesn't offer a few lifelines - with the ability to restart from the section of the level you failed in, but having only one life to work with may still prove too much for some. If you enjoy your DDR or QTE events on hard difficulty, Thumper is easy to recommended, but more casual fans should be aware of what they are getting themselves into.

Our ratings for Thumper on PlayStation 4 out of 100 (Ratings FAQ)
Presentation
70
Minimalistic sci-fi visual design works, as does the music.
Gameplay
80
The simple controls give a false sense of hope for the harsh difficulty that lies ahead.
Single Player
72
Increasingly fast-paced levels that you may be able to fight through, but the bosses will prove tough for many. The entire game is more about reaction times and perfect runs than anything else.
Multiplayer
NR
None
Performance
80
Works without any issues, quick loading times. PS VR integration is also straightforward.
Overall
74
Thumper is a well designed game that's more focused on challenging the players than providing a musical experience. If you're wanting to test your pure reaction times, look no further. 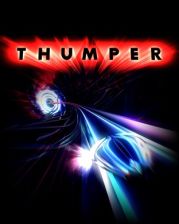