An adequate entry from the veterans of the music rhythm genre

Harmonix Music Systems, as their name might suggest, have been focused on developing music experiences since the early days of the studio. Before the music game genre became a phenomenon in late 2000's, the team made a couple of games that potentially kicked off the whole genre. One such title was Amplitude. Now, over ten years later and with the help of Kickstarter, a new version of Amplitude has been released on Sony’s latest console. And while it will satisfy some fans, most players might be put off by the game’s design and music style. 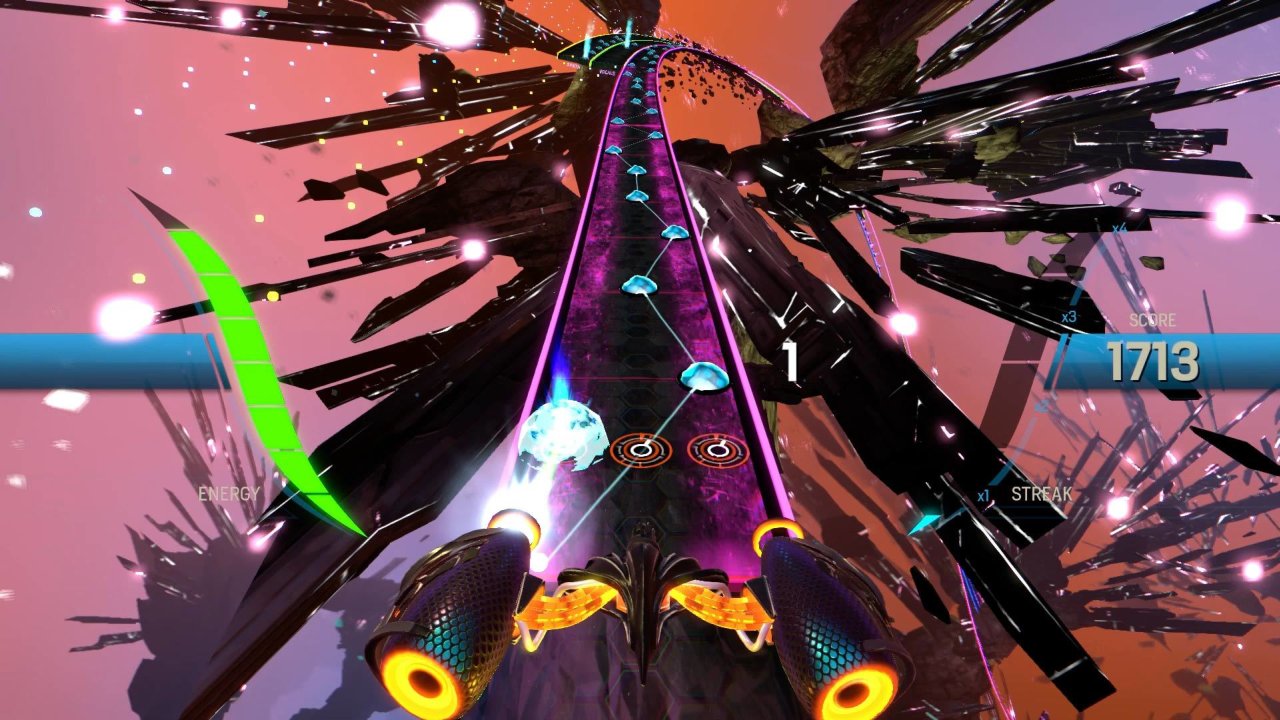 The core concept is very familiar to anyone who has played an arcade music game in the past, whether from Harmonix or other developers. Players operate a spaceship of sorts, as it rides down a number of different tracks. Your task is to hit encapsulating gems to free the notes inside, and in doing so, you’re adding sounds to the current song, creating a wholesome audio experience. It may take a little time to get used to the potentially fast paced nature of the inputs given you’re playing with a standard controller rather than a specialized peripheral, but there are a few input options that will hopefully suit most players.

Each song features a number of different tracks, each representing a specific effect – bass, synth, drums, vocals, and so on. Players can choose to use them on any of these tracks and the song will adjust based on what effect you’ve chosen to bring alive. Once you hit a certain number of notes in a track, it will temporarily disappear, so you move on to the others in the meantime. The gameplay becomes more multifaceted with the introduction of power-ups, which can slow down a song or clear the track of notes during difficult sections. You’ve also got a multiplier and energy (health) meters.

On the whole, Amplitude is a solid if largely familiar gameplay experience. As mentioned, there’s not much here that you haven’t seen before, even in Harmonix’s own smaller-scale games like Rock Band Blitz. You’ll become quite familiar with the mechanics by the time the short 15-song campaign is over. For players looking for something similar to the original game, there is a FreQ Mode with a circular highway format. What complicates matters is the fact that the Quickplay mode, where you’ll spend a majority of your time, has a notable number of songs that must be unlocked first. To do so, you’ll need to replay much of the content, almost to the point of grinding. For a game that only offers 30-odd tracks, it feels devious. 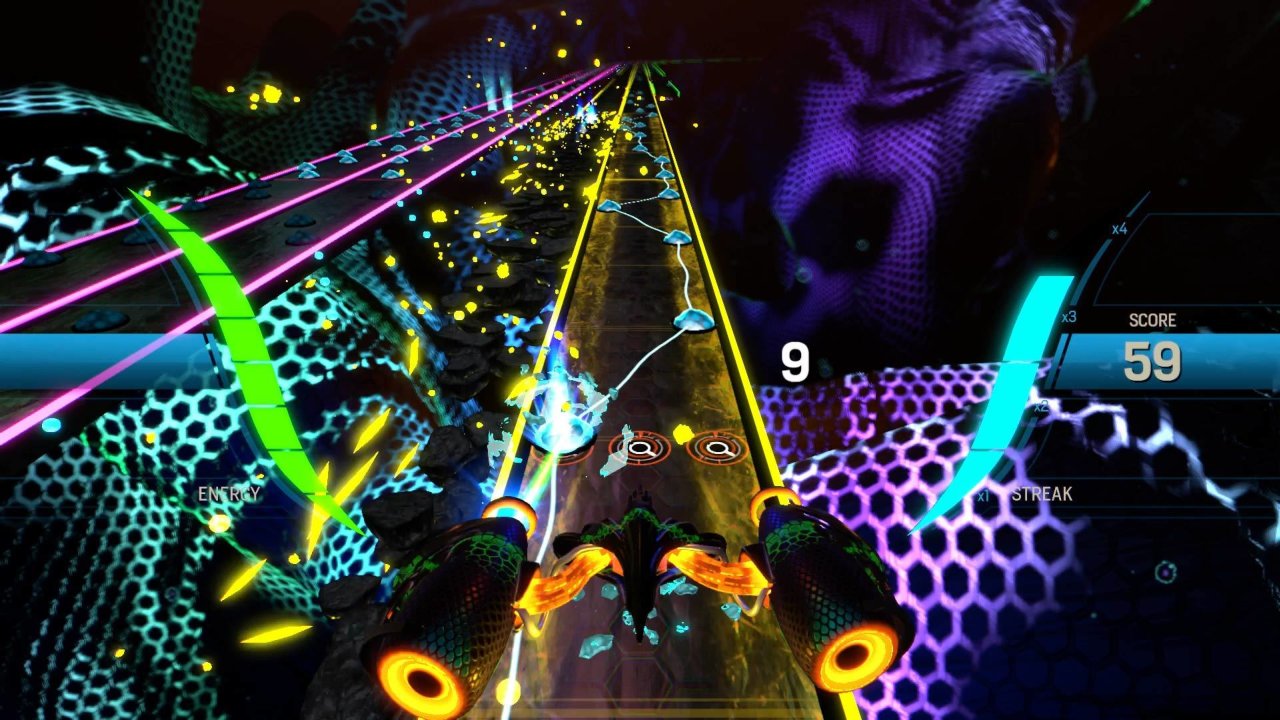 Music games rarely live or die by their track selection, but Amplitude might be the first game that warrants a warning. Either at launch or via DLC, the likes of Rock Band and Guitar Hero always offer variety; DJ Hero franchise managed to strike a great balance thanks to a variety of subgenres; and games like AudioSurf grant players the choice to import their own music. But with Amplitude, you’re facing a list of mostly similar electronic music, specifically EDM. This has rather severe potential limitations on who will enjoy it, and certainly doesn’t help the game’s chances of winning over a large fanbase. Listen to a few songs online or try the PS4 trial version of the game, before deciding if this sort of music suits you.

The soundtrack itself also isn’t particularly impressive. Most of the tracks were created by Harmonix themselves, so those looking for popular songs from known EDM artists won’t find them here. Many songs (particularly in the campaign) lack memorable beats, and things begin to blend together after a while. It sounds more damning than it is, but playing Amplitude at times feels almost like listening to samples of background music from some futuristic action game. There are a few good tunes here and there, but this likely isn’t the best that EDM has to offer. The vocals in particular add little to the experience and often feel forced and out of place.

There’s a couple of multiplayer options, though sadly they are local and not online (other than the leaderboards). The cooperative mode is fairly straightforward, letting players complete the same song together by hitting notes in their own track lane. It’s a pretty good time – though again, unlike similar games - the caveat is that your friends need to enjoy this sort of music. You can't just switch song genres if your friends have had enough. If they aren’t fans of EDM, Amplitude doesn’t offer many reasons to choose it over the usual suspects of Rock Band or Guitar Hero at parties. 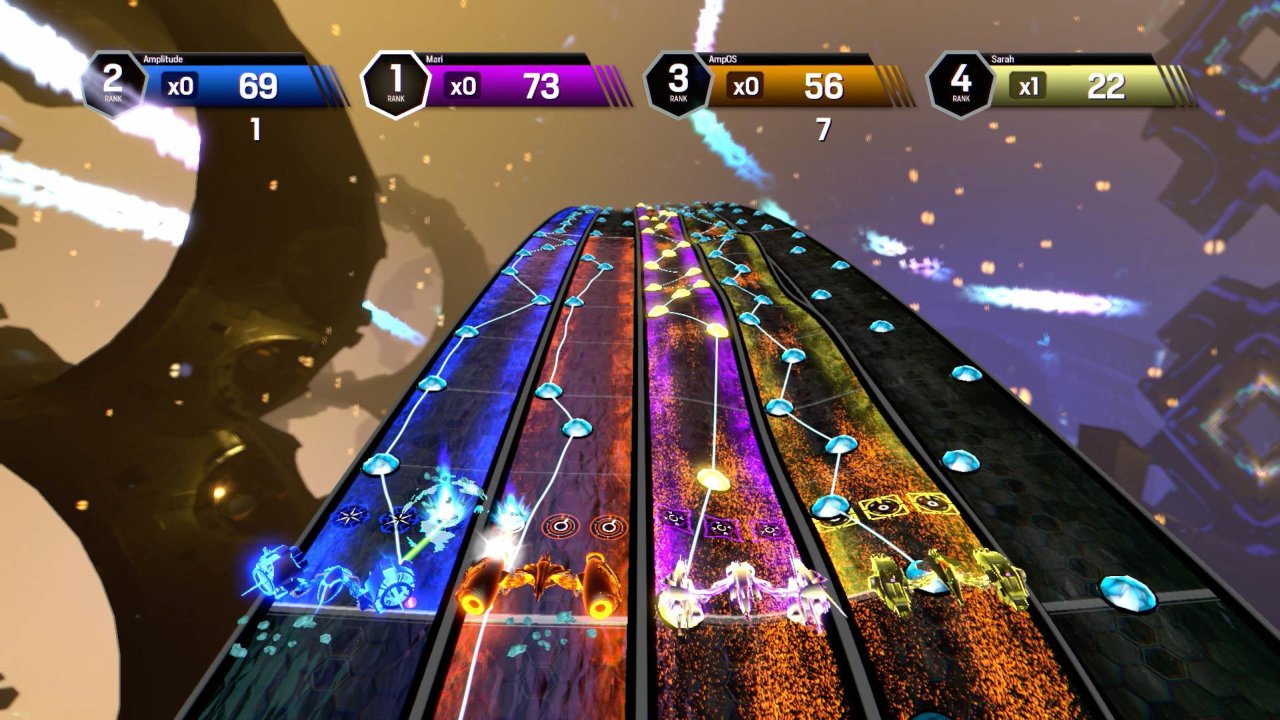 Things get rather more chaotic in competitive multiplayer. Here the task is to score the most points, while sharing the song’s six tracks with up to three of your opponents. You can only score notes on the track you occupy, so it’s often a mad dash to find an available lane. Though it can also be difficult to keep your eyes on which ship is yours, partially due to the game’s visual design.

Amplitude employs a sci-fi, futuristic visual aesthetic with a variety of colors and special effects. It is very nicely animated and runs without any issues – an important factor for a rhythm game. On the flip side, though, sometimes things can get too overwhelming. The amount of vibrant effects and transitions on the screen gets near-nauseating on some tracks, and needlessly so; the barrage of effects doesn’t add anything to the game’s already bright and stylish visuals, other than become a hindrance to the gameplay.

Amplitude is a decent effort from Harmonix. Like most music rhythm games, it’s easy to pick up, but difficult to master. For one reason or another, Kickstarter was used to bring the new version of this game to life in 2016, and it is perhaps those backers that will appreciate the game the most. Your enjoyment of the game will depend on how much you like EDM, as the rest of the elements are purely serviceable, and perhaps don’t warrant a $20 price tag.

Our ratings for Amplitude on PlayStation 4 out of 100 (Ratings FAQ)
Presentation
64
The game's vibrant visuals are nice to look at, but the plethora of effects can be a bit much. The song selection is decent but lacks standout performances.
Gameplay
70
A rather stock-standard design for a music game of the modern day.
Single Player
60
The campaign is short. Too many songs are locked away behind mundane requirements.
Multiplayer
75
Both competitive and cooperative play is well designed and can be fun in small doses. But it is only local.
Performance
95
No notable issues
Overall
68
Amplitude offers fairly stock-standard rhythm gameplay and nice visuals, coupled with a rigid unlock system and a music genre of limited appeal. 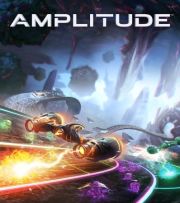 All videos for Amplitude (2)
Advertisement ▼