The first two Mafia games were anomalous in that they provided totally open worlds, but really didn’t give you anything to do in them apart from drive around in between story missions. The large environments served more as window dressing, a trick to immerse players and ground them in the setting and shoes of the protagonist. The sequel Mafia 2 was criticized for this empty open world, and either as a result of this or for other reasons entirely, the third game has abandoned this format for a more conventional modern one. The result is a very mixed bag with some soaring strong points and unfortunate, tedious lows that make it difficult to answer the simple question of whether this is a good game or a bad one. 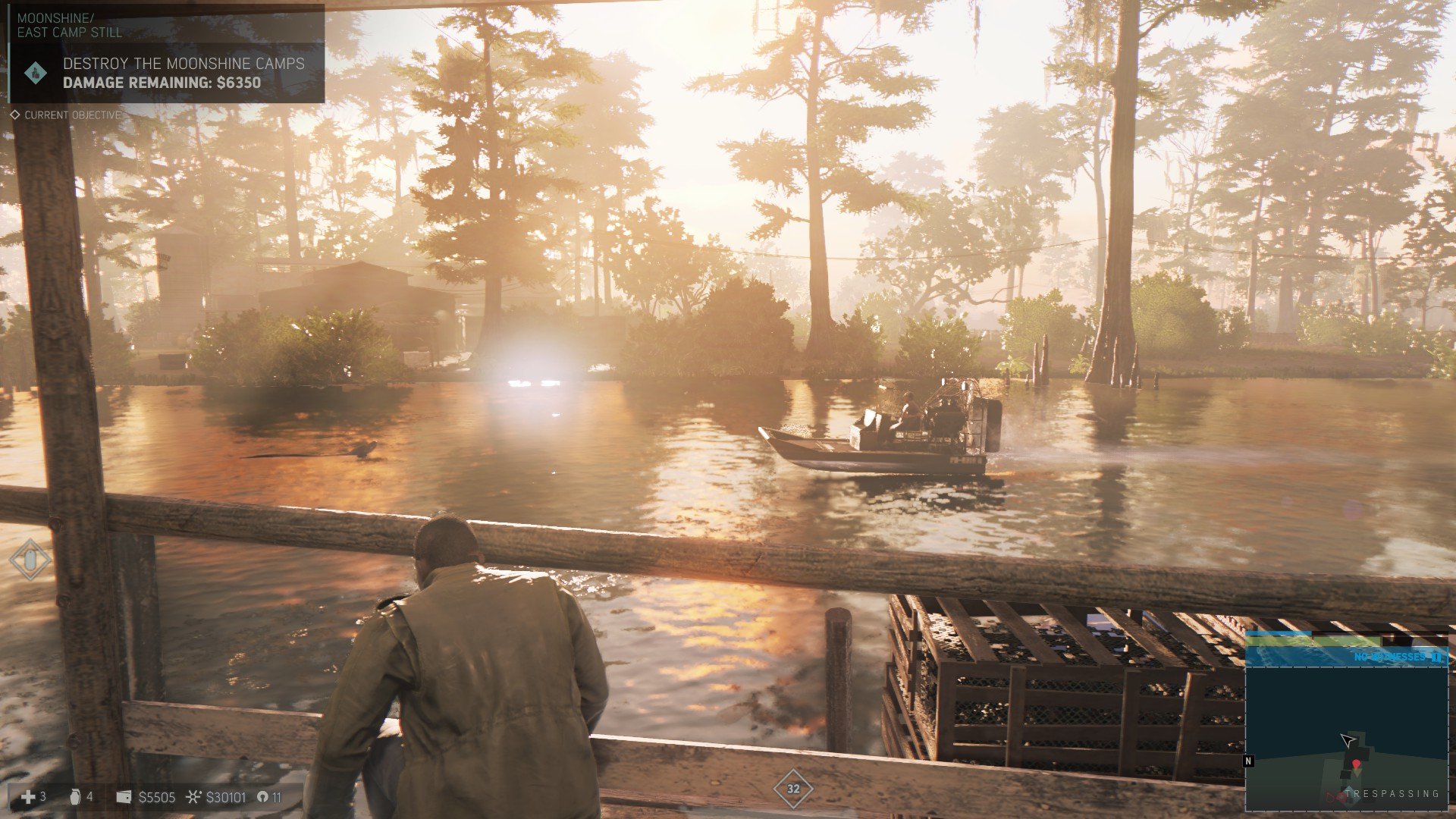 The early hours of Mafia III are some of its best, as the story is established and you are whisked from one mission to the next. You play as Lincoln Clay, a decorated African-American Vietnam veteran who is trying to rebuild his life after the war. The opening of the game sees Lincoln working with the mob to rob a federal reserve before a betrayal that sets up the main thrust of the story: revenge. The narrative is framed like a documentary, switching between the 1968 New Orleans and modern day interviews with characters who are still alive. The writing and facial animations during cutscenes are immediately engaging, and the high standards set by Mafia 1 and 2 are met here, but with a much more satisfying ending than what the second game had. Unfortunately, after the first few hours, the plot is spread quite thin and it becomes difficult to remain fully invested in Lincoln’s personal vendetta.

After the premise is established, the real meat of the game begins: slowly wrestling control of New Bordeaux away from the mob by taking over rackets and killing or converting mid-level mob figures. You do this by gradually working your way through each region of the game, where you will talk to an informant who will tell you about some places you can damage in order to draw the racket boss out of hiding. You will then drive around interrogating low-level operatives, blowing up or smashing equipment, and killing enforcers. You do this until you have done a certain amount of damage at which point you go back to the informant who will tell you the racket boss has shown his face. Finally, you will head to the base of operations for that racket and hunt down the racket boss. Once you have gone through this process twice for a territory of the city, it will be under your control and you will then unlock the next proper story mission.

Mafia III religiously adheres to this structure for its lengthy duration, and the repetition eventually starts to suck the life out of this game. The biggest issue is that you are often made to clear out the same buildings twice, once to cause damage, and a second time when going in to kill the racket boss. The bases of operation do eventually become relatively large and complex areas to sneak or shoot through, but the many cases where you have to go through them twice really hurts the enjoyment you get out of them. Even with this aspect of repetition removed, Mafia III’s structure would have been easier to swallow. 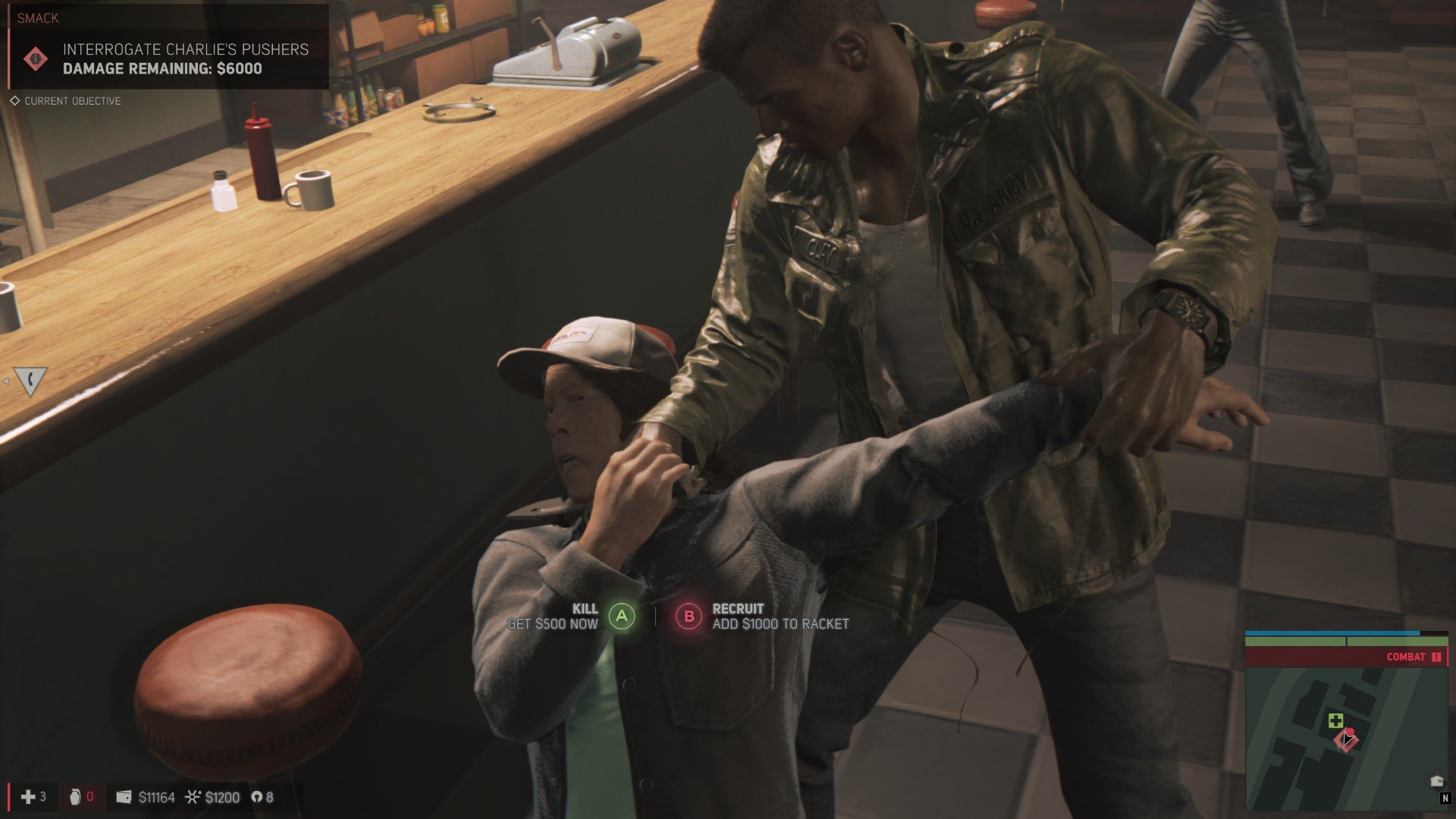 The story missions themselves are generally quite good, with interesting locations and enough narrative context to make things more engaging even though the gameplay itself rarely ventures into new territory. Sneaking through a theme-park at night that has been taken over by mobsters, fighting your way up a skyscraper and taking part in an underground boxing match are all highlight moments that make you wish the game had stuck with the story-focused format of its predecessors.

After a while, you recruit some Capos who help you keep control of the districts you have taken over, one of them being an older looking Vito from Mafia II. You can choose to do side missions for your Capos to further increase their loyalty, but the ones I did were uninteresting and the rewards not worthwhile. As you give territory to them, they give you access to new perks and weapons. For example, a weapons-van can be called to resupply you and let you buy new guns, or the angry Irishman Burke can use his contacts to convince the police to turn a blind eye to your shenanigans. You will need to decide which perks are most important at sit-downs that take place after a new territory is taken over (and you're deciding which of your crime bosses should control it), and they may supposedly turn against you if you don’t give them anything for a while; but I never saw this happen beyond some rude remarks from the Capos.

Easing the pain of repetition are solid gameplay mechanics and a great open world. Shooting, sneaking and driving make up the bulk of Mafia III’s gameplay experience, and all of these elements are reasonably well executed. The shooting is quite satisfying, with a large array of weaponry available ranging from WWII classics like the Thompson to relatively modern assault rifles such as the AK-47. The cover system is basic but functional, and Lincoln goes down quickly enough that shootouts can become challenging. The biggest issue with open combat is the enemy AI who can behave in pretty brain-dead ways or even bug out. When they behave as intended during shootouts, some will stay back in cover and throw molotovs and grenades while other burlier men will advance with shotguns, giving you enough to worry about to make things interesting. Annoyingly, the AI have a tendency to break, running around stupidly, getting stuck or trying to shoot you through walls. For this reason, I preferred to use stealth as the AI seem to behave a bit better here. 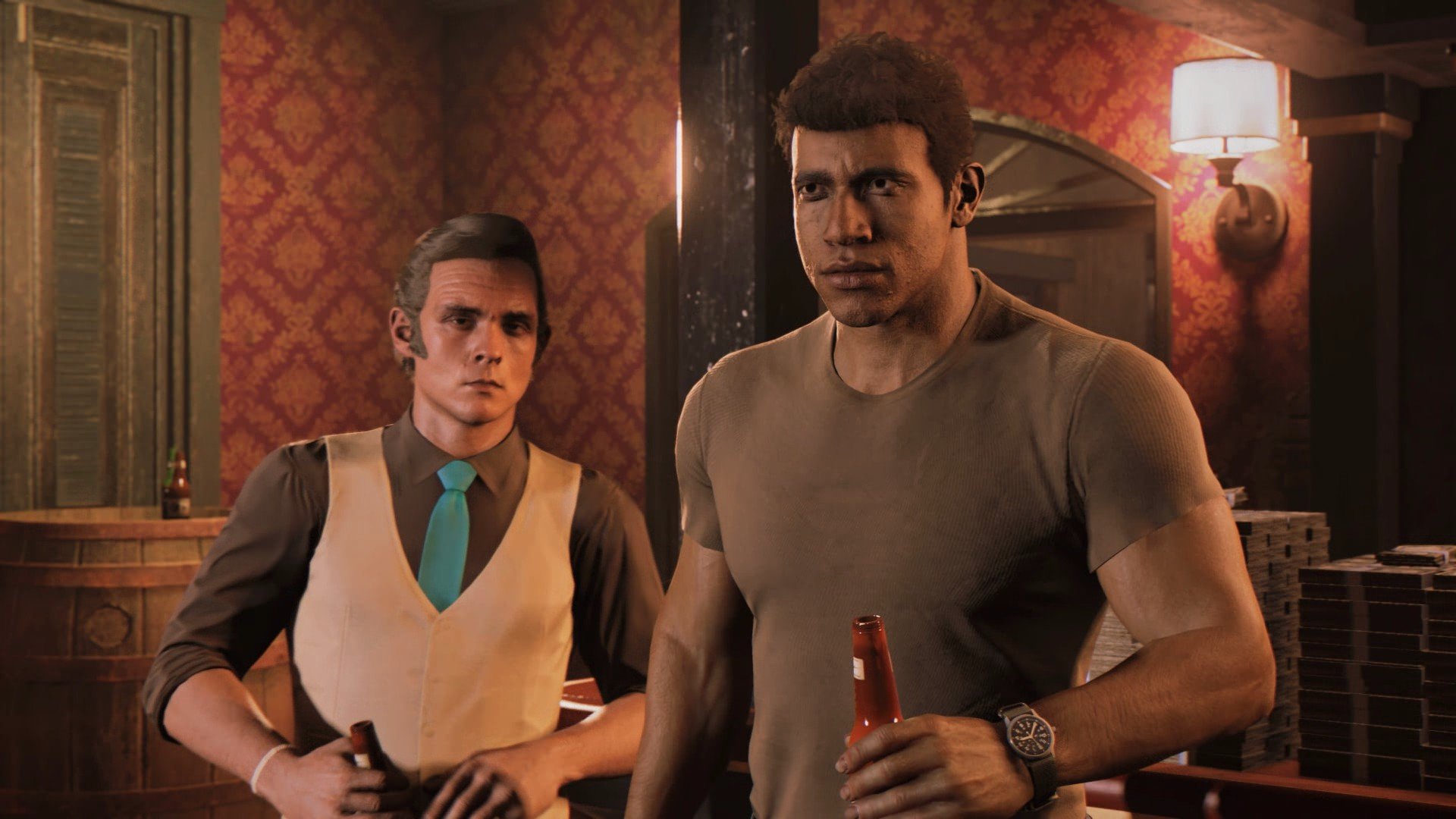 You have a good number of options for dealing with or avoiding enemies silently. Early on stealth is pretty simplistic as you only have a knife, the ability to whistle to attract enemies and hide bodies. Enemies behave consistently when it comes to spotting you; for instance, whistling to draw out enemies only works if they are spread out; if you whistle near a group, only one enemy will investigate the sound while the others watch, meaning the others will become alerted if you try anything. Sentry guards are also scattered around levels, and will run to a phone and call for reinforcements if they become alerted. Silenced weapons and smoking Vodoo-dolls add to your stealth options as you progress, making for a basic but enjoyable set of mechanics that I found preferable to open shootouts, as immersion is better maintained when enemies are still in their pre-scripted routines.

The Mafia games have always had realistic driving mechanics, or at least the option for them, and also realistic police who would attempt to pull you over and write you a ticket for driving too fast or running red lights. The realistic car handling remains, at least if you use simulation mode, but the cops are no longer as nuanced. They will completely ignore reckless driving, but immediately try to shoot you if you are seen with a weapon in public or if someone calls the cops after witnessing a crime. At first I missed the requirement to try and follow traffic laws when the cops were around which I always felt added to the immersion of past Mafia games, but given the size of the map and amount of driving you have to do, ultimately I think it is best that you can now speed past cops and through red lights without attracting their wrath. Another smart addition is when you have a destination set, signs will temporarily appear at street corners indicating if you need to turn or go straight, a smart idea that keeps you from having to stare at your mini-map while driving around.

The map itself is one of the most impressive aspects of Mafia III. It is huge and varied, with a large swath of swamps, waterways and woods making up the southern half and a huge urban area making up the rest. Mafia III does not shy away from racism and some businesses are not open to Lincoln due to the color of his skin; I found it a bit chilling the first time I went into a shop and was told I was not welcome there (until I punched the racist proprietor in his face and stole his money). The rackets you dismantle have you sneaking through night clubs, Jazz bars and bath houses that are all nicely detailed and often ooze atmosphere. There is no fast travel, but excellent music from the 60’s is there to keep you company as you drive around, with one of the best licensed soundtracks I’ve come across in a long time adding to the atmosphere in a meaningful way. Aside from the excellent soundtrack, the rest of the audio is fine, with meaty weapon sounds, squealing tires and top-notch voice acting. You will also come across collectibles in the form of scanned exerts from classic Playboy and Hot Rod magazines, and classic album covers among others. 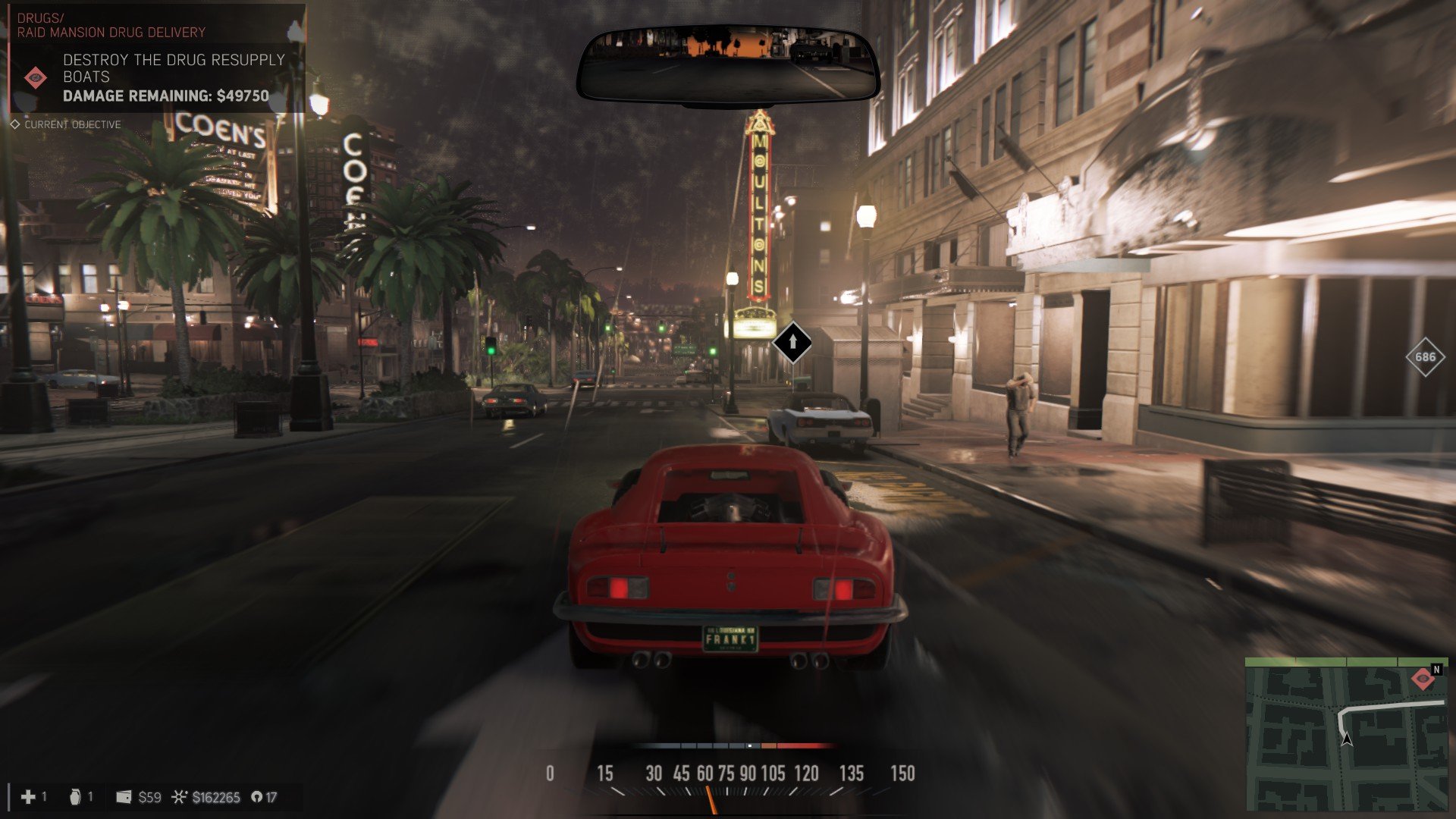 Unfortunately, the game engine itself lets the open world down a bit. Blurry textures, limited draw distance and bizarre lighting effects can pull you out of the experience, while at other times the game can look quite good, particularly during the scripted story missions that take place at a specific time of day. The game doesn’t run particularly well either, especially when driving around at high speed through the urban parts of the map, with stuttering and tanking framerates that are hard to excuse in light of other games that both look and run better. Other technical issues cropped up with some regularity as well, such as physics glitches, some broken scripting during missions and a couple of hard crashes. All of this along with the problematic AI indicate that Mafia III would have greatly benefited from a bit more time in development.

Mafia III has many of the ingredients of another great entry into the series, but they just don’t come together as well as they should. For every memorable story mission or profound moment of cruising through the Bayou with Creedence Clearwater Revival blasting on the radio, there are five tedious ones where you are driving across the map for a cutscene, or clearing out the same Racket HQ for the second time. The fact that seemingly basic features like the ability to change Lincoln’s clothes and street racing are coming as free updates in the future, along with the technical issues, indicate the game would have greatly benefited from a few more months in development. As it stands, I’d recommend the game to those who enjoy a good historical setting or a well told revenge story, but only after a few more patches have come out and the free content updates are released.

55
Considering the lackluster visuals, the choppy performance especially when driving around is hard to excuse. The bugs and occasional hard crashes make things even worse.
Overall
65
Though Mafia III has a strong story, great setting and some satisfying mechanics, the mind-numbing repetition and technical issues make it a letdown compared to its predecessors. 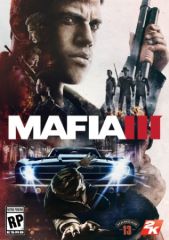 All videos for Mafia 3 (6)
Advertisement ▼