Mighty No. 9 is a strange one indeed. Not because it pushes players to their limits, surprises its audience or offers any new insights in the ever-expanding gaming medium. Rather, the nostalgic 2D platformer initially pitched by Mega Man's Keiji Inafune transcended over a three-year gestation from frothily-hyped concept, to elusive urban legend. Something bewhispered in the arcane corners of NeoGAF, subject to speculation as to when - and if - the thing would ever come out. An optimist might take a game's delayed release to bring only good things for content, but after a twelve-stage trial of frustrating encounters, lifeless animation and vague jabs at originality, Comcept's final product makes for a mightily middling experience. 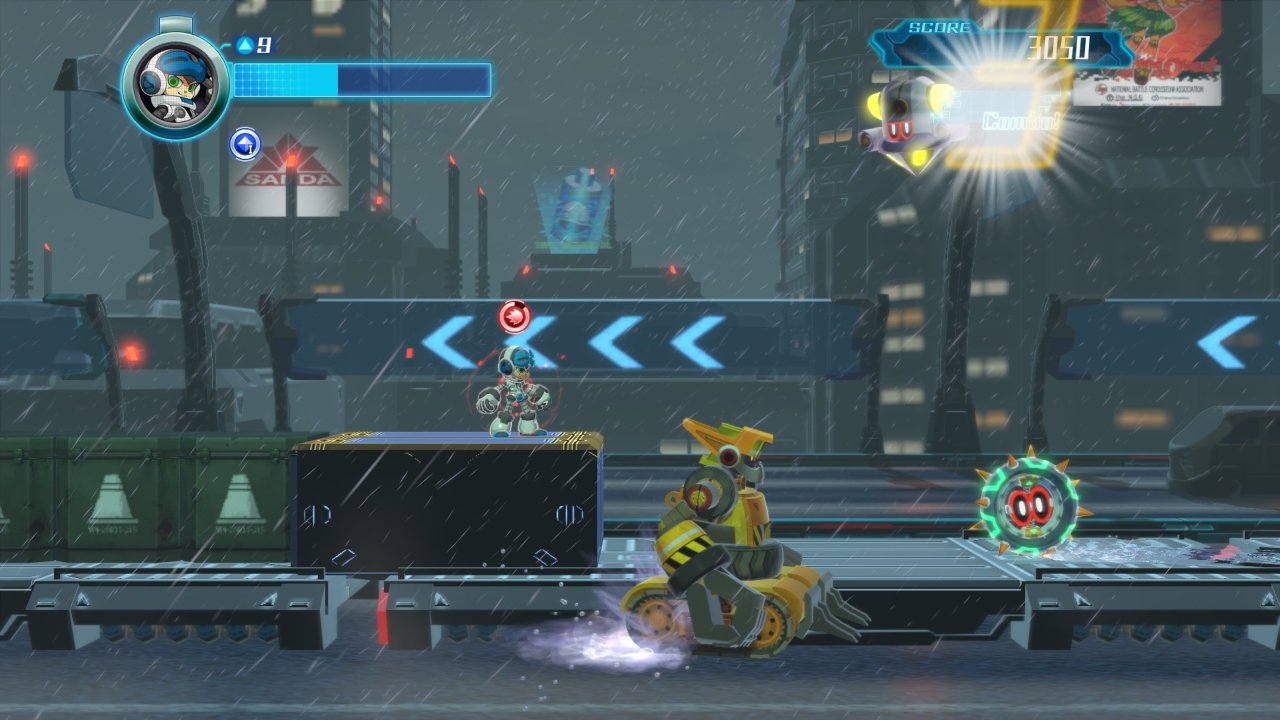 The story decides to begin itself in the clutches of technological advancement. Mechanical tinkering is on the rise and violence is a thing of the past, with all skirmishes confined to a Battle Colosseum, where androids fight it out for public enjoyment. You play as Beck, the plucky ninth in a series of combat bots dubbed The Mighty Numbers. These mechanized gladiators each possess a special ability, ranging from water manipulation and electro-conduction to pyrokinesis. Beck, however, is a bit more introverted, and can instead take on the powers of his siblings by absorbing their 'Xel.' After a virus fatefully breaks out to send his fellow Mighties AWOL and machines everywhere into a frenzy, the player guides Beck through twelve themed stages to vehemently snap them out of it and restore civilization.

The dissatisfaction is palpable from the off. The script is hit-and-miss, offering a few hazy attempts at humour amidst swathes of superfluous natter that add little to the storyline. Bosses hum along to the same two or three stock phrases, with a tacky pun thrown in now and again to see encounters through. I came to loathe the incessant pew-pewing of deep-frozen toddler Cryo, and I feel like I've been convinced of Mighty No. 1's desire to see the world 'buuuuuurn' too many times to care. A particular highlight occurred during an early pre-boss section, in which one of my mechanized pals told me to "flush Number Two." Seriously.

Dialogue is restrained and plodding, with more awkward pauses than a Victorian heart-to-heart. As a result, cutscenes can feel odd and drawn out; something that staggers the gameplay considerably. The animation feels equally distant, with characters held in suspended poses as their facial animations loosely resemble some word or another. When they show any emotion at all, their expressions are static regardless of the situation. As the growing robotic crisis spiraled out of control, I was almost amused by Dr. Sanda's enduring jolliness as he stood tottering in the background. 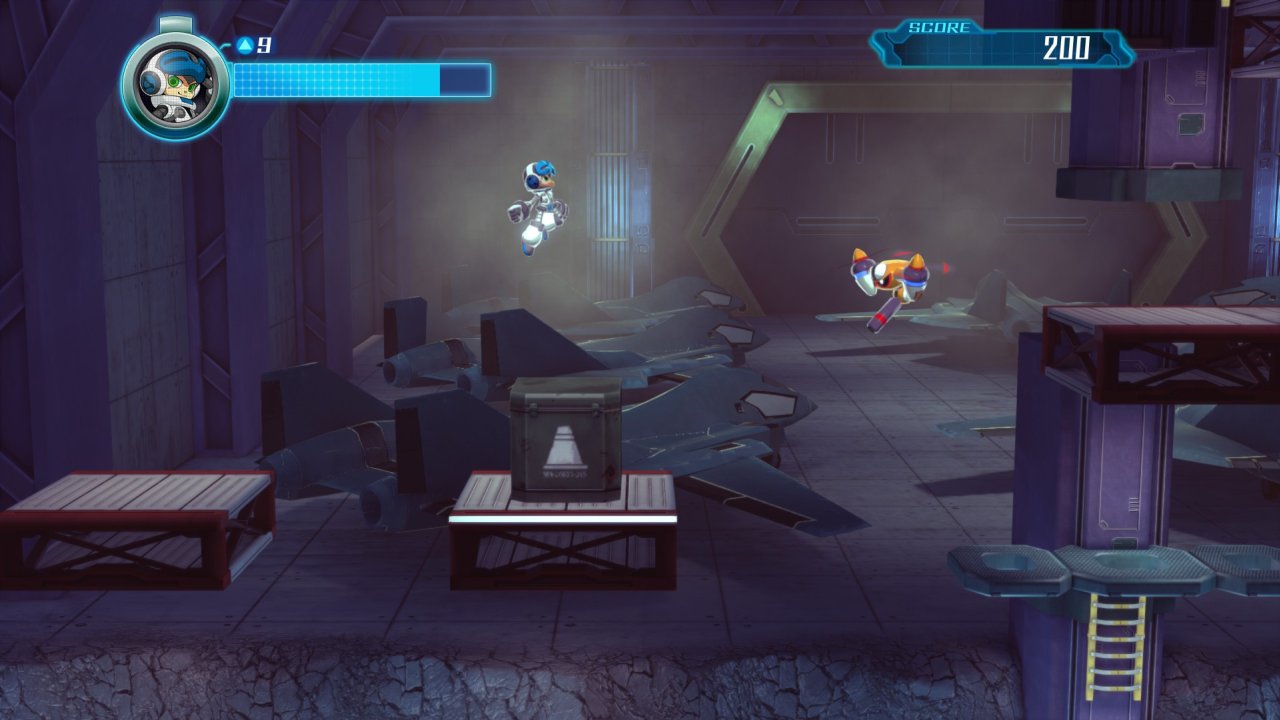 The clumsy writing isn't exactly supplemented by the game's visuals. Environments look soft and underdeveloped, with android goody-goody Beck retaining a doughy appearance that doesn't quite look past the prototype stage. The underground levels are much easier on the eyes, offering the dynamic colour and sense of depth that was originally put forward back when the game was announced. But alas, between Beck's doddery running animations and the scripted falling-blob towers, Mighty No. 9 somehow looks worse after three years of development than it did in the initial testing phase. And yet, the PS4 version still manages the occasional dip in framerate.

Bosses feel similarly lacking in design, fitted out with generic themes that have already been seen before. Drill-handed brute, Seismic feels like Concrete Man's chattier younger brother, whilst the lair of Cryosphere evokes Chill Man... but doesn't really add anything new.

Whilst the game wastes no time aligning itself with the isms of its fabled ancestor, there are glimpses of uniquity to be found within Mighty No. 9's gameplay. As opposed to Mega Man's energizing 'E' cans, the game uses Beck's assimilation mechanic to encourage skillful combat. After taking sufficient damage, enemies become 'disabled', allowing Beck to promptly dash through them to absorb their Xel, which can recharge abilities and fuel one-time health boosts. The concept of using enemies to your advantage offers a spirited twist on the classic Mega Man formula, but the game holds back on acquainting players with its innovations, instead leaving nifty support functions like 'AcXel Recover' to be fortuitously stumbled upon. The game clearly carries a lot of admiration for Capcom's Blue Bomber, but for all its undying loyalty, Mighty No. 9 appears remarkably underconfident about what it can bring to the franchise.

A nod to the Mega Man scaffold, Mighty No. 9 is comprised of eight stages that the player is free to tackle in whichever order they choose, with a further four becoming available thereafter. Whilst there was a degree of calculation involved in the original Mega Man, Mighty No. 9 mostly flaunts the speedier philosophy of its successors; championing breakneck level traversal and rapid fire over giving enemies a gander before reducing them to nuts and bolts. Beck's character controls and the driving dash feature all feel responsive, allowing platforming sections to extend a fast-paced thrill not unlike the Mega Man titles of the 1990's. 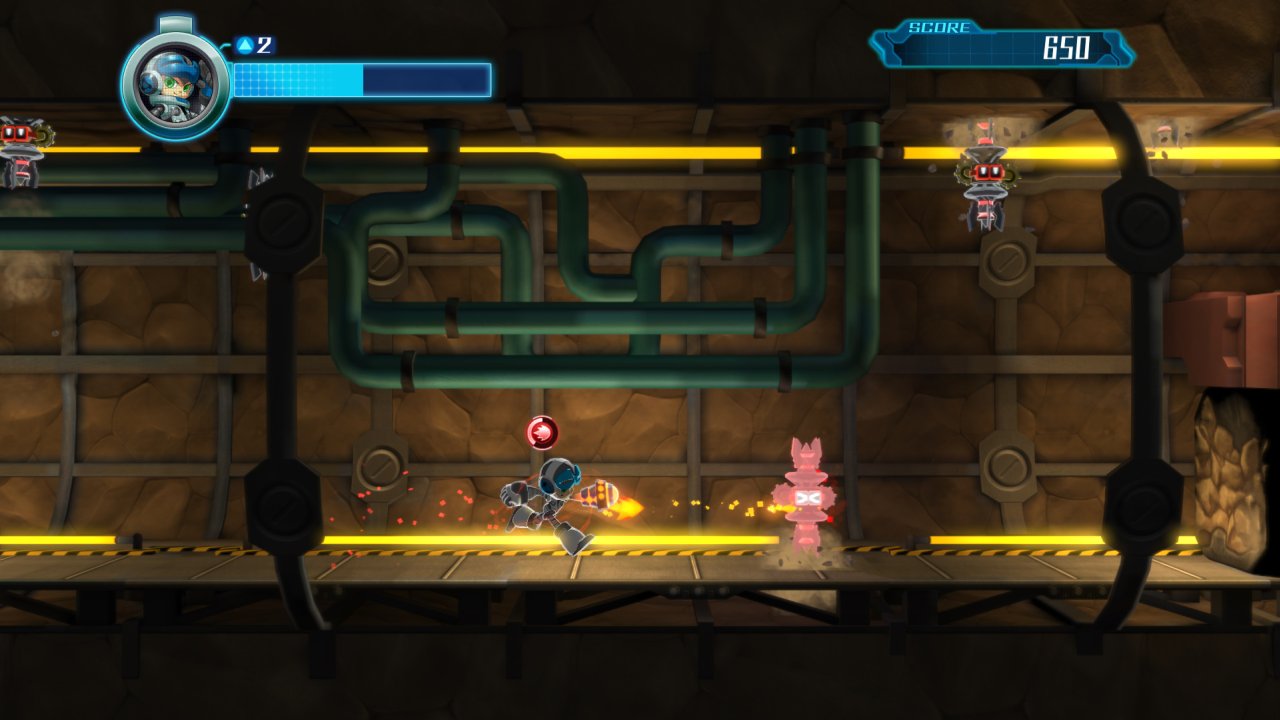 Calculation isn't completely void, though, as levels often find time for thought between the zippy dash segments. Moving platform sections are notoriously lined with insta-kills, requiring pin-point timing and keen observation to pass through unscathed. The affair can be made frustrating by Beck's pressure-sensitive jump and ever-so-slight slippiness, but these obstacles offer a tough challenge that touches on the unerring difficulty of classic Mega Man. It's also a relief to know that stages can't be blustered through by blindly spamming the dash function.

Like the iconic Robot Masters, each boss is equipped with special abilities that can be absorbed by the player. The number of special abilities Beck acquires increases as bosses are defeated, a handful of which provide direct weaknesses to later enemies in the game. Though my newly acquired projectiles came in handy for triggering explosives, new forms always seemed to teeter just on the edge of necessity. Alternate forms are often just as powerful as Beck's standard arm-cannon, rendering them little more than transient playthings to tie-up each boss battle.

Though Mighty No. 9's boss fights attempt to recreate the hallmark difficulty of the 8-bit era, they rarely empower the player enough to feel satisfying. Instead, bosses come across as laborious and unduly frustrating. Whilst disabling is more optional during the main stages, bosses must be stunned before your attacks can count; something that makes their constant floating out of the player's reach all the more irritating. I'd spend an age wearing down enemy health, only for my attacker to resign themselves to the top of the screen so I couldn't disable them.

And watching their health steadily replenish as they tease you from the rafters is about as encouraging as a bungee cord made of spaghetti. Gaining new forms occasionally sorts the problem, but as beating bosses is necessary to acquire new abilities, you're often stuck with no other alternative than to nibble away at enemy health until you finally pull through. Oh, and if you get caught by one of their special attacks, you're frozen in place until you waggle the analog stick just quick enough to create a comfortable flame, or make Bruce Lee weep. If you don't, say goodbye to a hefty chunk of health. If you do, well, hats off. 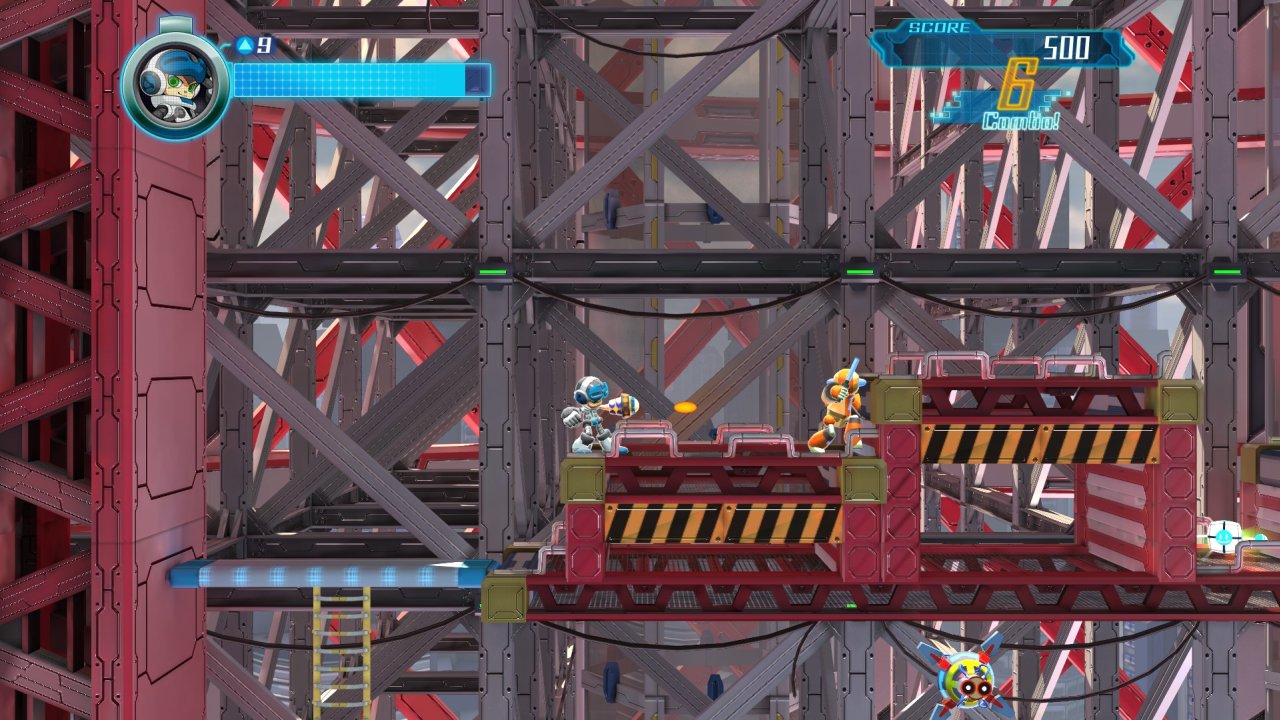 I rocketed my way through the campaign in around four hours, most of which was spent toppling the irksome bosses. If you're still keen, there's also a Challenge Mode to delve into, comprised of various tasks designed to test Beck's mettle in a range of different areas. Challenges come with special conditions, such as reaching a goal without dashing or attacking, or clobbering enemies to rack up a pre-specified combo. These levels are generally less saturated and feel more cohesive as a result, making for a neat arcade sideline against the hit-and-miss campaign.

You can also opt to partner-up in Mighty's cooperative mode, starring Beck and his android buddy Call (a match made in idiomatic heaven) in time-based combat challenges and typically repetitive boss sequences. Though Co-Op Challenges much resemble those of the Solo Mode, Call's shield mechanic provides a touch of defensive flavour beside the offensive dashings of Beck. The included Ray DLC is by far the most promising, featuring an additional story mode character that feels instantly more effective than her arm-cannoning counterpart. And her claw attacks? They work a treat on hovering bosses. And if you're really keen, there's the game's seventy-thousand-something credits to behold. It's only slightly longer than the game's story mode.

After a string of rickety release dates, rumours and development cycles, Mighty No. 9 transpires to be... well, a rickety platformer. The snappy controls and challenging level design can be grinningly satisfying, but they're often lost to wonky writing, rough visuals and frustrating boss battles that fail to develop over time. It's neither the hip-young Mega Man follow-up we wanted, nor a particularly notable platformer and after three years in the works, Mighty No. 9 ends up disappointing once the credits roll. And boy, can they roll.

Our ratings for Mighty No. 9 on PlayStation 4 out of 100 (Ratings FAQ)
Presentation
40
Had the 32-bit era still been upon us, Mighty's visuals might well have been applauded. Unfortunately, its underdeveloped designs and wooden character animations just feel bland on current-gen consoles.
Gameplay
59
Controls are responsive and platforming is competent, with Beck's assimilation power offering a promising spin on the Mega Man franchise. But its modern innovations feel distant amongst the more traditional Mega Man mechanics.
Single Player
51
With a brittle narrative compiling shabby writing, repetitive dialogue and awkward character performance, the game's reasonable platforming sections bow under the weight of its discouraging boss battles.
Multiplayer
50
The addition of Call's shield ability introduces some defensive balance to some of the co-op missions, but encounters aren't all that remarkable.
Performance
70
For the most part, Mighty No. 9 plays smoothly on the PlayStation 4, with minimal interruption. There's the odd framerate blip to be observed now and then.
Overall
52
Mighty No. 9 is cut straight from the heart of one of Capcom's best-loved franchises, but suffers several wounds in the process. Whilst it makes some attempt to shine on its own merits, I can't help but feel it's this retro love that holds it back. Frustrating, uneven and painfully restricted; something made all the more apparent by its current-gen status.

All videos for Mighty No. 9 (4)
Advertisement ▼