Draws a complex line between puzzles and world design

The notepad I used to solve the vast array of nefarious puzzles in The Witness contains the ramblings of a madman, even more so than usual. There are squiggles, letters, grids, squares and lines—and those are just the shapes that can be deciphered. Many have large crosses over them, and you can probably guess what that means. One puzzle appears more than any other. That specific puzzle looks simple enough, a 4x4 grid with an unfathomable number of lines swirling around badly-drawn characters. The devastating aspect of this puzzle is that it is actually impossible to solve in its presented form; despite being so close to a solution, one crucial piece of information was missing. That information was located in the world surrounding the puzzle. I needed to think outside the box. This is the crazy puzzle-world of The Witness, where you might be confused and amazed at the same time. 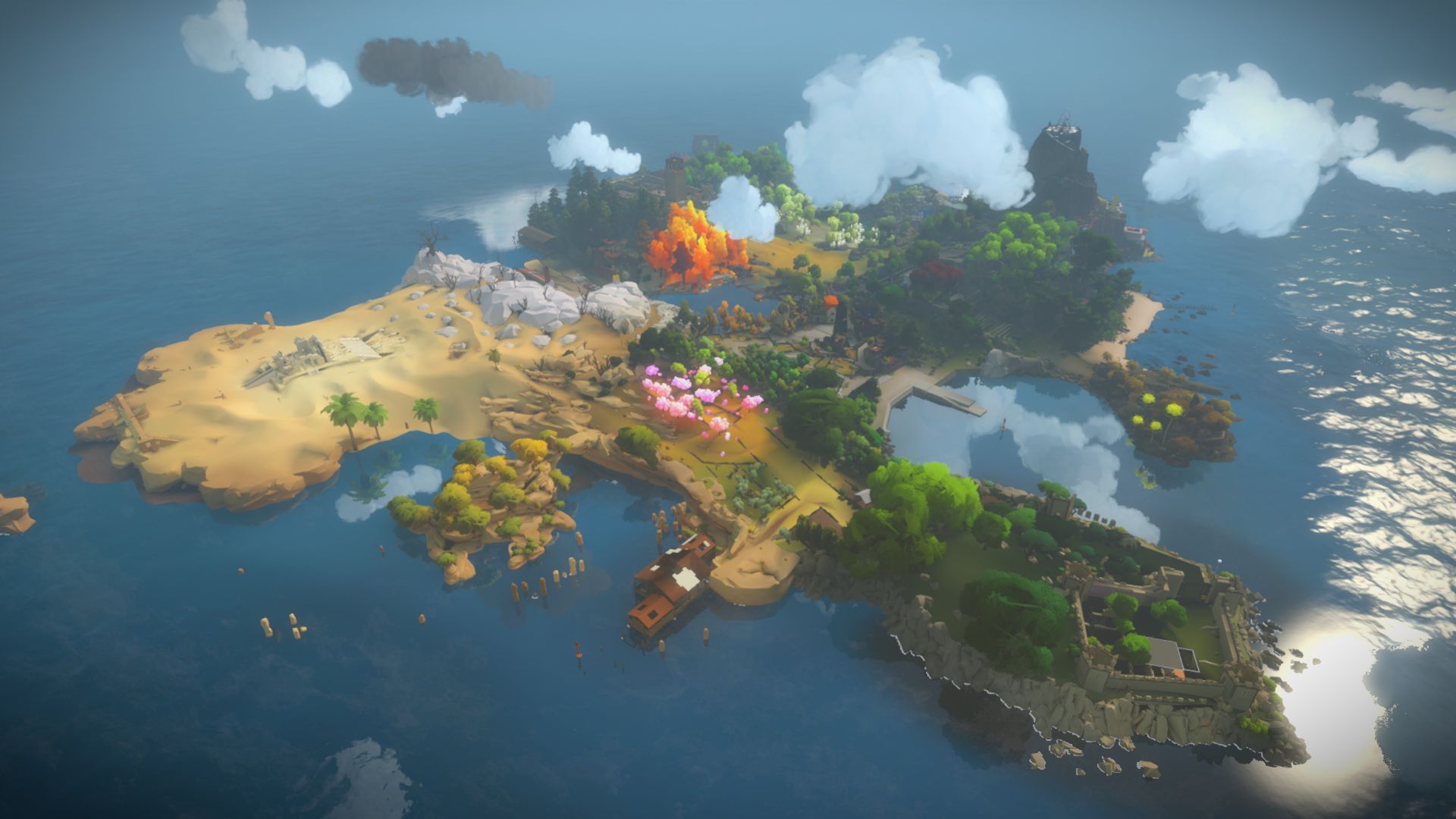 The Witness is the second game from Jonathan Blow following his successful 2D platformer, Braid, which contained puzzles involving time manipulation. The Witness is different from Braid in structure and design. Played in the first person view, players will roam an island and solve hundreds of maze-like puzzles. The island is vibrantly colored, like a cartoon world, and sometimes the palette is overbearing. These bright colors keep the world areas separate, and assist when solving the more abstract puzzles. And yet, despite its suitability for Bugs Bunny and co., the island is actually creepy. Human statues are unsettling in mazes, scratching noises in the bushes can be distracting, and the mirrored reflection in the water is not quite right. Perhaps unintentionally, the juxtaposition of color and solitude is just enough motivation to solve puzzles without dawdling. The Witness has no direct story involving the player, unlike The Talos Principle or Portal, and this makes learning the ultimate goal. There are some voiced quotes to find and a few video presentations—they have a common theme but are not required to progress. You must travel alone and solve the dastardly enigmas with inference and reason.

All the puzzles in The Witness revolve around drawing a single line through a maze or grid. You trace this line, with the mouse, from a start point to an end point. But the line cannot cross itself or share intersections—a bit like the Snake arcade game—although you can go backwards to take a new path should you err. These puzzles are typically presented on an interactive terminal screen that often has a power conduit attached to it. Completing the puzzle will supply power to whatever is on the other end; frequently it is another terminal, and a harder challenge. Other times it is a door or a platform to access a new area. It seems simple, right? If only it was that easy.

The island is comprised of about a dozen major sections that modify the rules of the maze-line puzzle. Each new rule is represented by a different symbol that will become second nature by game’s end. One involves colored squares that need to be isolated and another requires the formation of Tetris blocks within the solution itself. The harder areas combine two or more of these rules to create the ultimate challenge. Complete a section and it will activate a laser beam that points to a strange device atop a mountain. Now you have a basic goal—activate enough lasers to turn on the device. The variety provided by these different sections is impressive. Despite doing the same maze-line puzzle from start to finish, the changed rules alter the solutions greatly and demand heavy mental arithmetic. 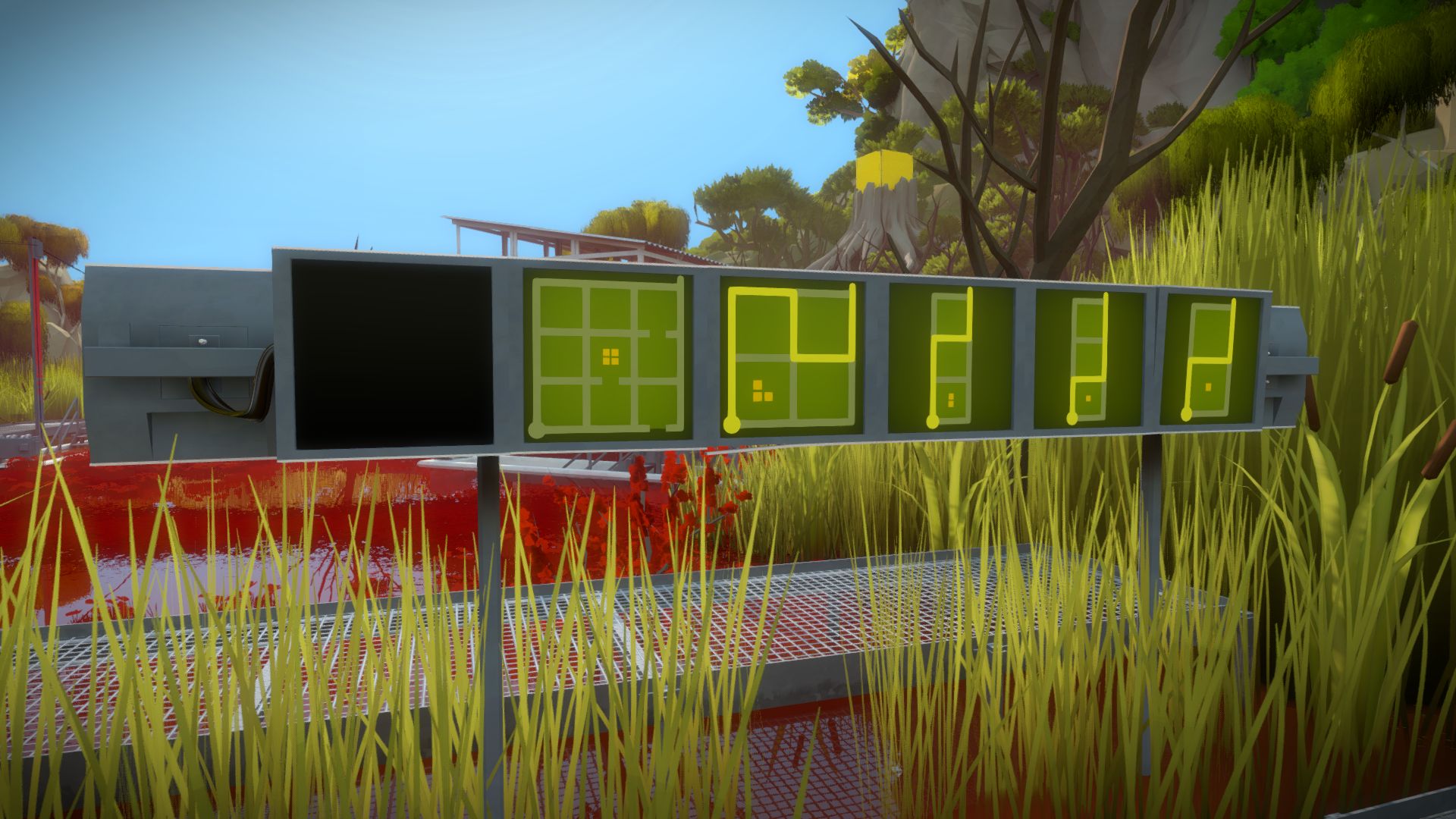 Here is an easy tutorial section, it gets much harder

Luckily, each section of the island provides adequate training. Sometimes this means a long row of terminals that progressively get tougher. The scary part is that this “tutorial” sequence is merely lexicon for the jaw-dropping brainteasers that lie ahead. This tutorial component is necessary because the game has no voice-over to explain the fundamentals, nor is there a HUD to quickly demonstrate the basic design. You learn at first by trial and error, and then apply that knowledge in increments. Solving the final group of puzzles exemplifies how well the game teaches its mechanics, and how complicated it all becomes from those humble beginnings.

The downside of teaching in situ, often via a line of terminals, is the sheer number of puzzles that will need to be solved in total. Although it would be tricky to skip any intermediate puzzles, it still weighs heavily on the experience as you move from screen to screen like a production line. Progress is thus quite slow, and completing all major sections of the island may take 20-30 hours, depending on aptitude. So while the game trains brilliantly, it also bogs itself down because it needs to explain everything by demonstrating the unique rules in enough situations so the player understands. 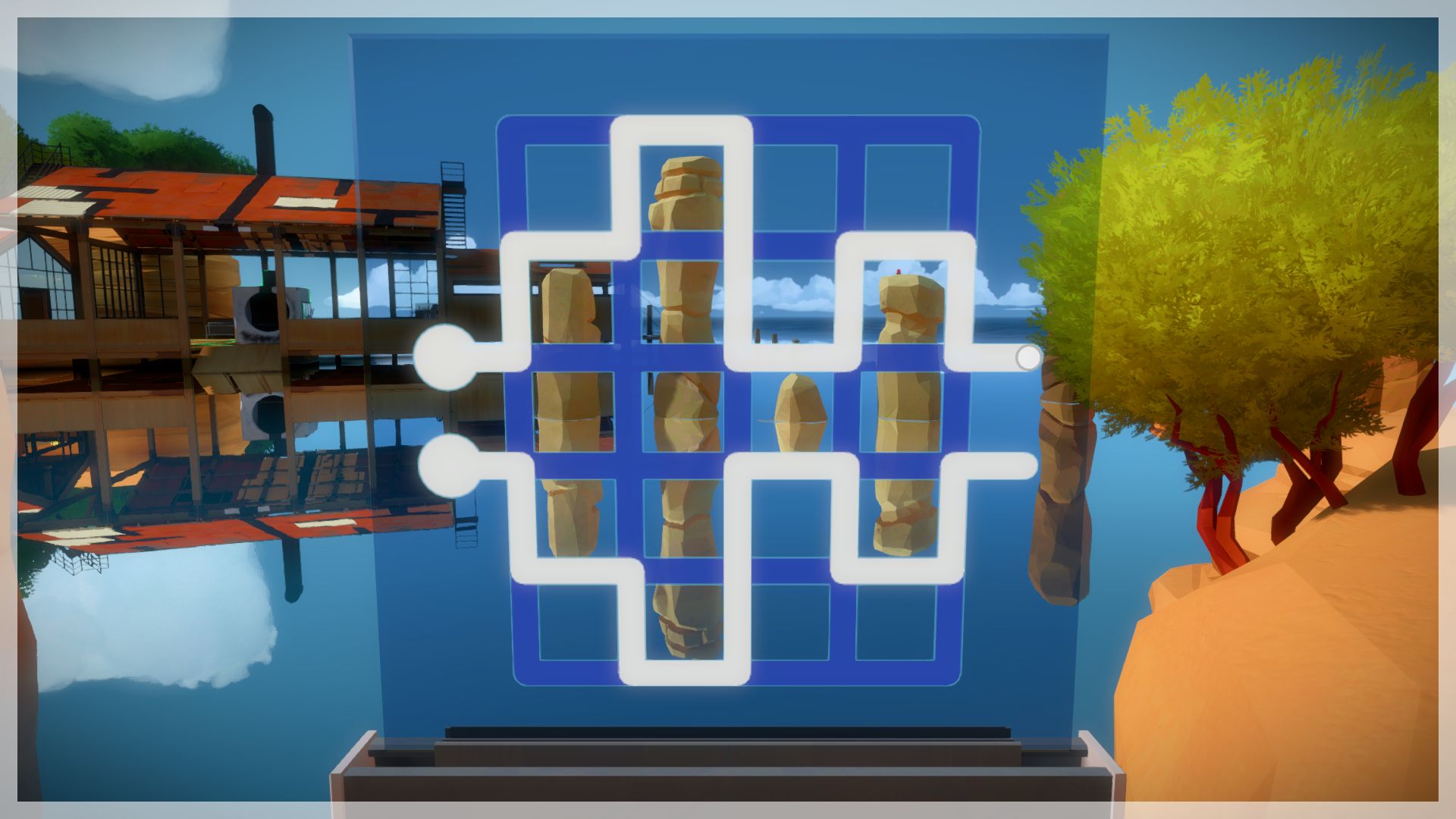 One of the simplest world-puzzle interactions

Just when the terminal screens begin to outlive their welcome, The Witness throws another curveball at the player—the world around the terminals becomes part of the puzzle. Much like when the different symbols modified the rules, the natural qualities of the landscape and buildings take the challenge one step further. One example requires tracing a line around rocks in the environment that have been placed either behind the screen or nearby. Soon it becomes clear how carefully the island has been designed and this may also explain why it first appears peculiar. Almost all of these world twists are brilliant, generating a wealth of satisfaction once identified and successfully deployed. Although it would spoil the game to mention any more in detail, since they form the crux of the game, players must look, listen, and move to beat its trickiest creations. It is all a matter of perspective. Discovering them is half the battle, but rest assured the game is not easy at any stage. Without this puzzle-world interaction, The Witness would still be smart, but it is truly gifted with such an inclusion.

All of this makes for an incredibly difficult puzzle game. Keeping track of solutions in a notepad can help, but learning is more important than transferring information. Getting stuck is probable and many puzzles may seem impossible at first. The game allows, perhaps even encourages, movement between different sections of the island if one area proves too difficult. Any progress is saved immediately, and it does not take long to run from one corner of the island to the other. Gates between sections can be unlocked to expedite travel, rewarding exploration and the gradual application of knowledge. A boat can be used to travel around the island—required to access one section—but it is not a fast travel solution. Moving between puzzles minimizes stagnation, but it will not always remove frustration. That frustration might arise from the sound puzzles that strain the tone-deaf, or from a botanical facility that stresses the color blind. Fortunately not all areas need to be completed, but since the end puzzles require knowledge from all sections, it will be tough going. 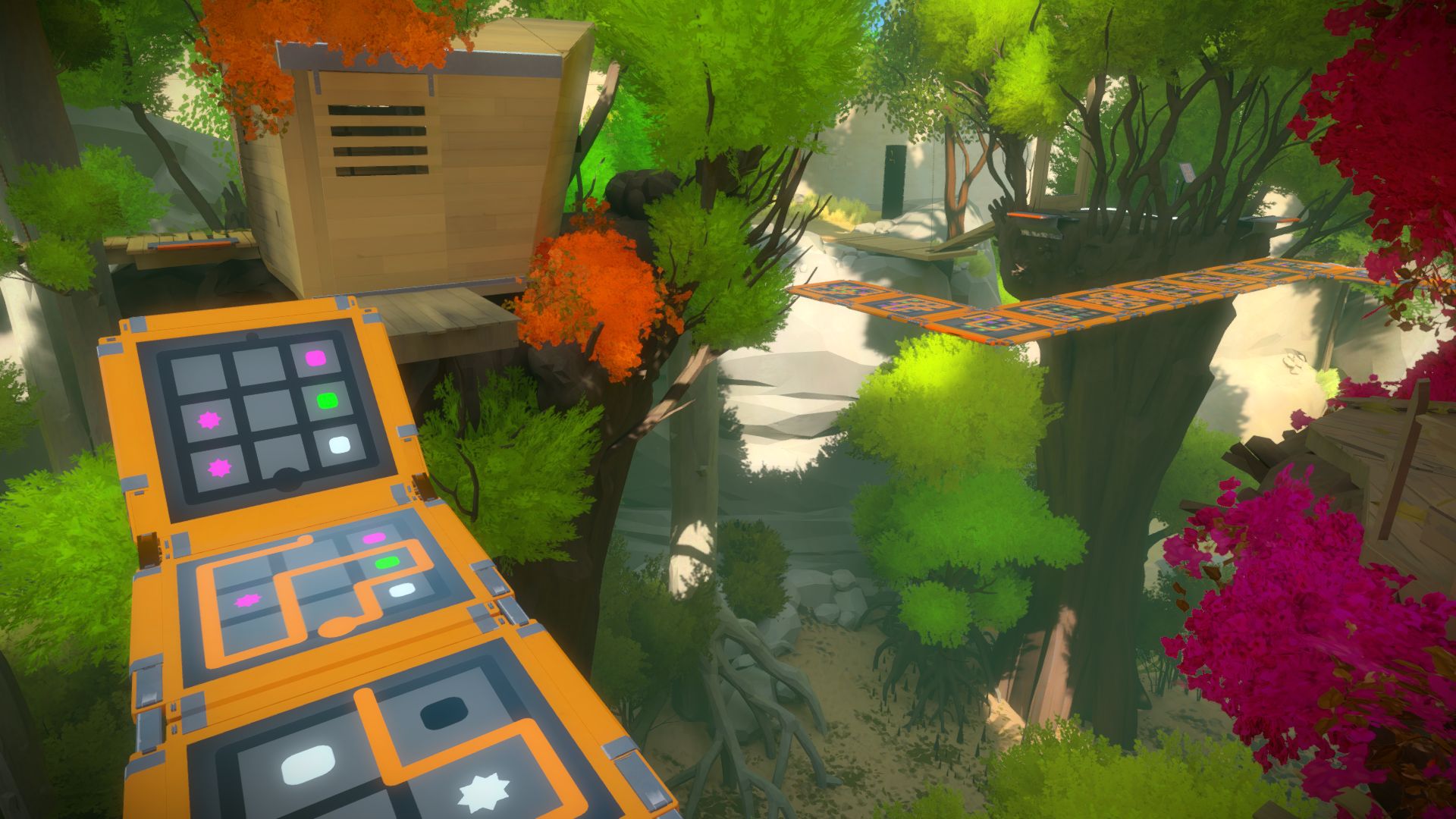 Although difficult, The Witness is worth playing to behold its exceptional trickery created largely thanks to the stellar world design. Each corner of the world has a new challenge and the training process is always flawless. The well-designed maze puzzles are going to retrain your brain and make you look at things from a different perspective. Not all players will find their way to the crippling selection of final puzzles, but many will discover a few of the devious and wondrous solutions. Just finding one is more than enough reason to play, and the delightful solutions may spur players to solve more because all the answers are there to discover. The most important rule to remember in The Witness is that it is not a race to discover its masterful workings. So take your time and learn something new. Learning is reward enough and there is no finer game to demonstrate its power.

Our ratings for The Witness on PC out of 100 (Ratings FAQ)
Presentation
85
The colorful world looks good, but there is far more intricate design that is hidden and worthy of high praise.
Gameplay
88
It exploits unique puzzles and continually modifies the basic rules just enough to make the old seem new again. Puzzle mechanics are taught superbly.
Single Player
81
There are many clever puzzles to solve although occasionally this becomes routine with so many in quick succession. It will probably take 20-30 hours to finish.
Multiplayer
NR
Performance
(Show PC Specs)
CPU: Intel i5 3570k
GPU: Gigabyte 7950 OC 3GB
RAM: 16GB DDR3
OS: Windows 7 Ultimate 64-bit

84
Some minor stutters when moving between areas, but it is mostly smooth with no load screens.
Overall
83
The Witness is a challenging and eye-opening puzzle experience that has been designed with such precision that it can alter your thought process for a long time. 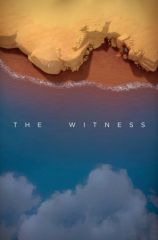 Our Review of The Witness
83%
Great
The Verdict:
"Draws a complex line between puzzles and world design "
Game Ranking
The Witness is ranked #300 out of 1658 total reviewed games. It is ranked #19 out of 138 games reviewed in 2016.
299. Skylanders SuperChargers
PlayStation 4
300. The Witness

All videos for The Witness (2)
Advertisement ▼