The story behind Homeworld: Deserts of Kharak’s development is a bit of a strange one. It started as a Homeworld-inspired project being developed by ex-devs of the original games, with the obvious difference of it being a ground-based RTS instead of a 4x space-strategy title. Yet events conspired to land the Homeworld license in Blackbird Interactive's hands, and instead of starting on a new project, they opted to retroactively fit their existing title into the universe as a prequel. What they have created feels surprisingly authentic, with gameplay mechanics and atmosphere that emulate the lonely, haunting, vaguely middle-eastern experience that characterizes the series. 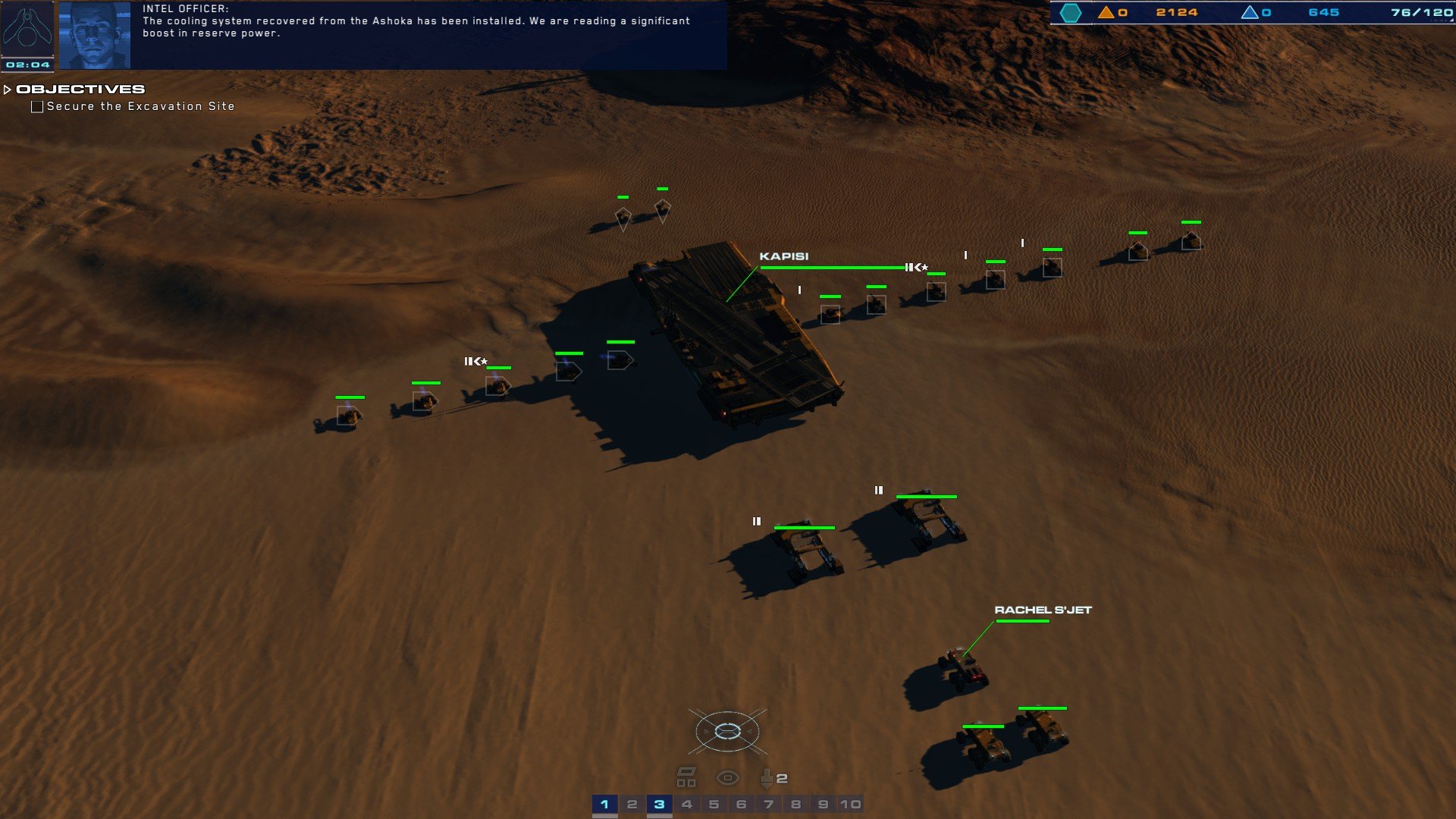 The entire plot of this prequel is based on the memorable introductory cutscene to 1998’s Homeworld. Your people are on a dying, warring planet, looking to investigate an anomaly detected by one of your satellites deep in a huge desert region. The region is occupied by a fanatical but highly advanced group who consider space travel to be against their religion and therefore are hostile to your people. Like the original games, the campaign is presented as a linear, connected series of events, with each mission moving the plot forward and leading to the scenario of the next one. This gives the already intriguing story a great sense of cohesion and allows you to get invested in the expedition and several of the characters involved thanks to the strong writing, stunning cutscenes and deep lore that is there if you feel inclined to dig into it.

One major mechanical repercussion of this story structure is that your army carries over between missions, one of the ideas borrowed from the original games. This means that if you barely scrape by on one mission, the next one will be more challenging. Barely scraping by a tough mission in the original games would sometimes force you to restart and do better, and while there are a few cases where this might be true in the prequel, it is generally more forgiving and gives you a bit of time to get back on your feet at the start of most levels. Still, this continuity makes the individual missions more stressful as you attempt not only to complete the objectives, but do so without taking too many losses. Still, there is an option to start with a default unit loadout for every mission.

The missions themselves are varied and well contextualized within the story. Most of them are multi-staged, involving offensive and defensive components that make use of the new units that are slowly introduced throughout the campaign. You might need to capture and defend three separate locations on the map, assault a base defended by heavy turrets that can be disabled by knocking out control towers, or coordinate with an allied carrier to defeat a seemingly invincible enemy force throughout the 10-12 hour journey. Missions are designed in such a way that certain approaches are vastly more effective than others, and generally speaking, building a blob of units and charging the enemy is a good way to fail due to the often limited resources at your disposal. 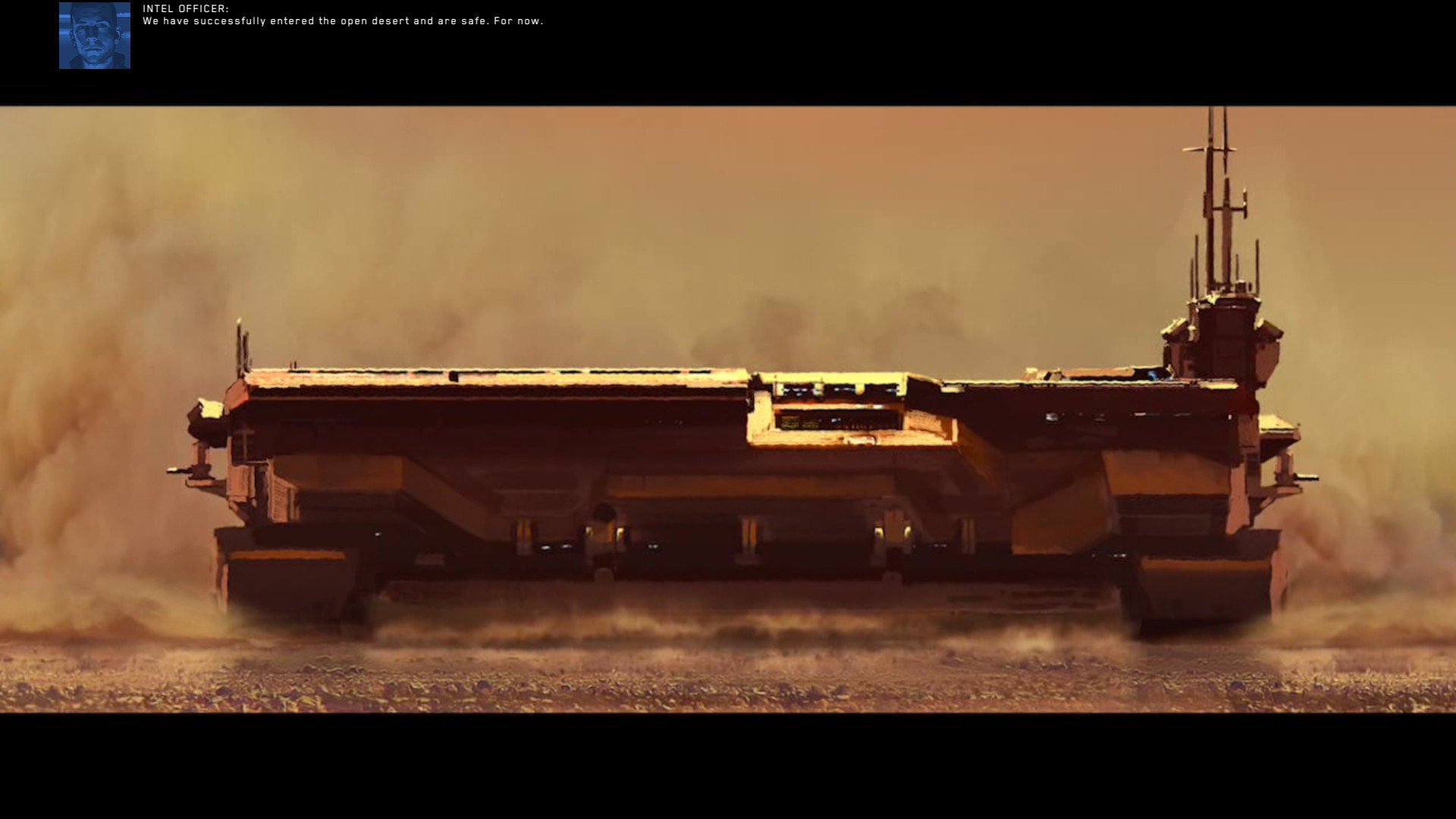 The actual gameplay is a blend of ideas from Homeworld and traditional ground-based RTS games, and ultimately feels quite unique. Instead of a Mothership, you get a huge aircraft carrier on treads that crawls around and is used to produce units. Your carrier, dubbed the Kapisi in the campaign, is your hub and must be protected, but you can also choose how its internal power is used: repairs, increased armor, offensive weaponry or increased range can all be bolstered or reduced depending on the situation. The units produced by your base carrier mirror those in the original Homeworld games. Light, fast-moving vehicles are great for harassing the enemy while heavier, longer range vehicles blast them from afar.

Most units have a fairly well defined role and once you understand how to use them, it makes for a rich tactical experience. Rail guns have incredible range and do a lot of damage, but they are inaccurate against small, fast-moving units and can easily be flanked. Placing more generalist assault tanks in their ranks lets you intercept the smaller attack craft, and even deploy smoke screens to cover your advances. Heavier cruisers are slow and make for easy targets, but they can deal a lot of damage and soak up even more. If you manage to keep your units alive for long enough, they will eventually rank up, granting important bonuses to offensive and defensive abilities, further encouraging unit preservation. My only criticism is that maintaining control groups can be a bit finicky as you lose units and different groups mingle together during combat.

Another defining mechanic is that line of sight plays a big part in the game, as your units need to be both within range of their target and have a clear shot at them in order to hit. The game takes place in a desert, with huge rolling sand dunes making for some fun tactical possibilities. Long range units can be placed on the crests of the dunes so they have clear lines of sight while you can set up ambushes in the deep valleys, where your units are safe from the long-range attacks of your enemy. You can press a key when ordering units around to see a topographical view of the terrain to help decide where you want to place your units. 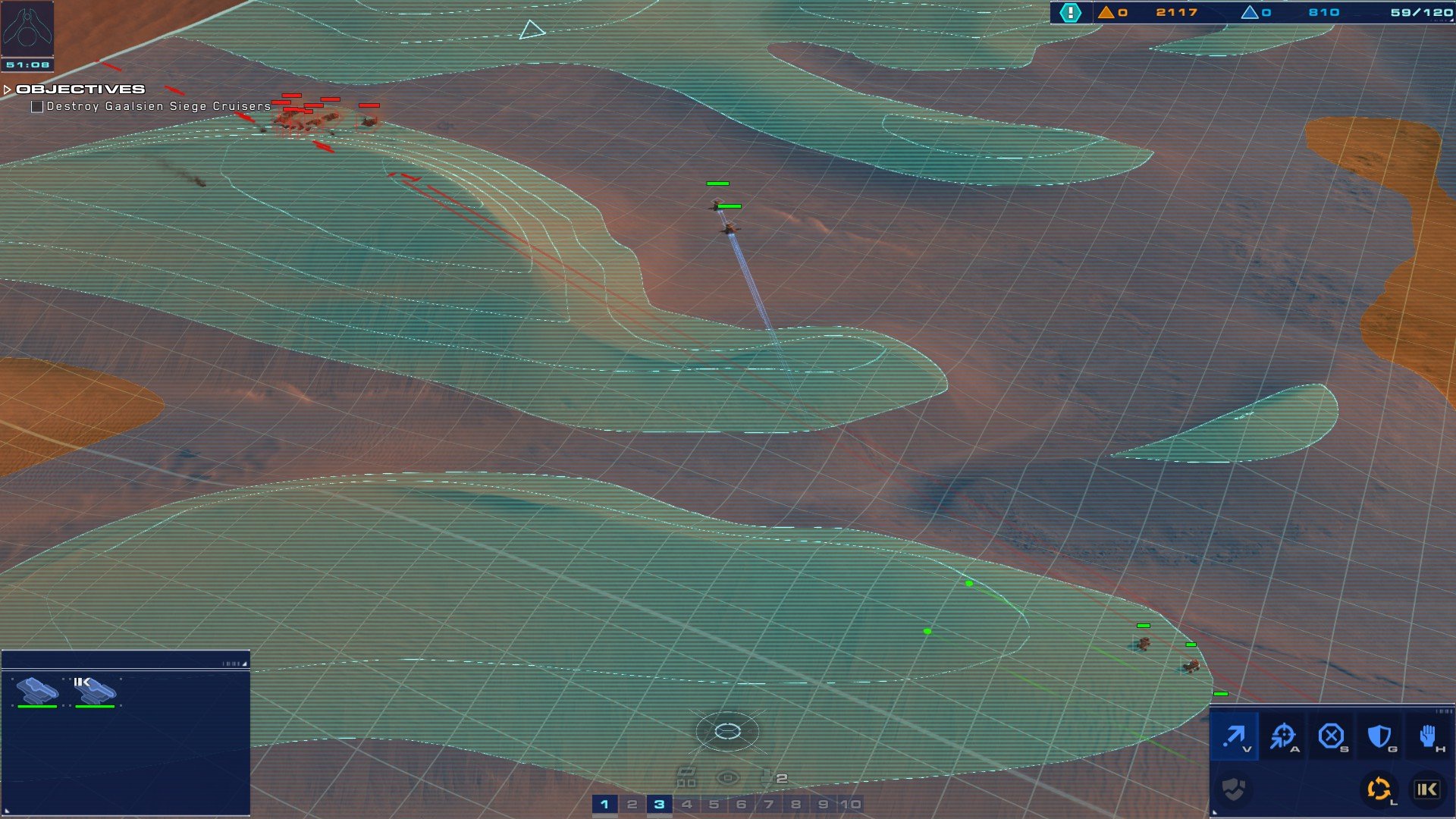 Aircraft also play a significant role and are implemented in a clever way. You can build a few different types such as strike-fighters, bombers and gunships. When you want to make use of them, you simply select your carrier, press a hotkey (or click the UI) for the desired air-craft type, and set a destination area for an attack mission. Once in the air, you can micro-manage the air-craft as you see fit, but left on their own, they will fly to the target area, automatically engage any enemies, and then return to the carrier for resupply and repairs. One effective strategy is to use your ground forces to focus on anti-air units and then launch aircraft to rain fire down upon the heavier anti-ground units.

Resource gathering is likely the most traditional aspect of Deserts of Kharak. You build salvagers who must collect two types of resources required for researching/building new units and upgrades. The resources come from old wrecks found throughout the desert. Some resources can be collected immediately while in other cases you must plant explosives on larger structures in order to break them down into smaller pieces your salvagers can access. When doing this, you will also come across ‘artifacts’ which can be collected to provide bonuses to your army like increased power for the air craft carrier or improvements to specific units.

The Homeworld games to my mind have always been strongest in their campaigns, and Deserts of Kharak is no exception. Skirmish and competitive multiplayer options are present, but in a fairly limited capacity. You can fight against AI or other players in a couple of modes, a more standard annihilation mode and a much more innovative mode, Artifact Retrieval. This is the mode used for ranked games, and sees both teams competing to collect artifacts and bring them to an extraction zone on the map. This is a great mode that creates action throughout a match and across the map as both teams scramble to collect artifacts while preventing the enemy team from getting artifacts to their extraction zone. 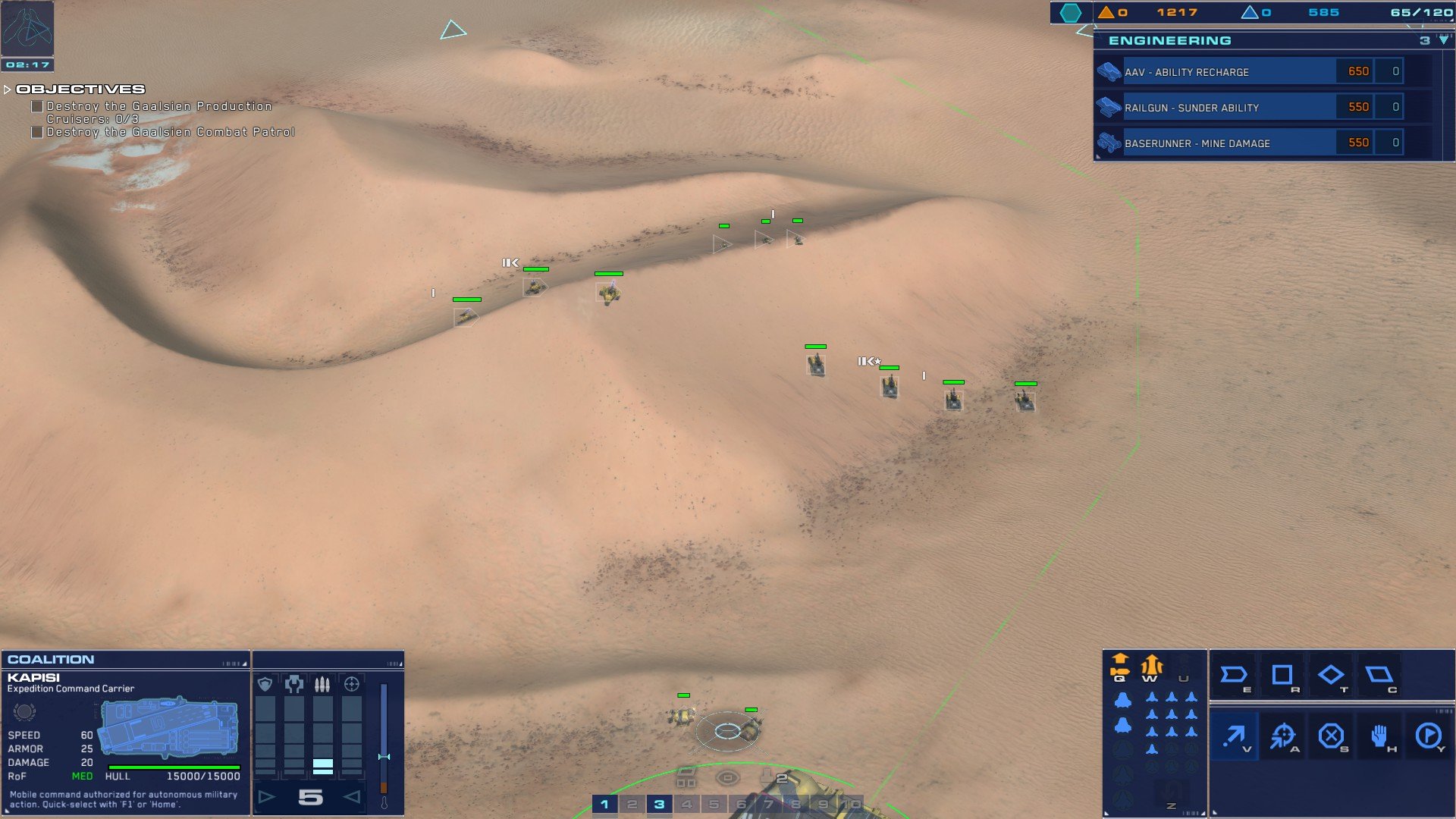 Sand Dunes can be utilized for great tactical advantage

The multiplayer and skirmish modes also give you the chance to play as the second faction, the Gaalsien. Their units and tactics are fairly similar to those of the Coalition who you play as during the campaign, the primary difference being they can build production cruisers who let you produce units away from your carrier. The similar factions might seem disappointing compared to other RTS games that offer several highly unique factions, but the result is a more balanced experience.

Sadly, the skirmish and multiplayer modes have some serious drawbacks. There are only five maps currently, two for 1v1, two for 2v2 and only one for 3v3. The AI performs well enough in artifact retrieval mode and during the more scripted campaign, but during annihilation they do a poor job of defending their carriers and scavenger units, making it far too easy to harass them to the point where they die and you win an unsatisfying victory.

The competitive multiplayer has a structure in place of different leagues in ranked matches as well as unraked and custom games, but right now there aren’t many people playing. I was only able to find 1v1 games and the small player base resulted in long wait times and uneven matches due to varied skill levels. If you want to get much out of Deserts of Kharak’s multiplayer, you will likely need to enlist some friends to play with and against. This is a shame because the Artifact Retrieval mode is fast, fun and full of action. 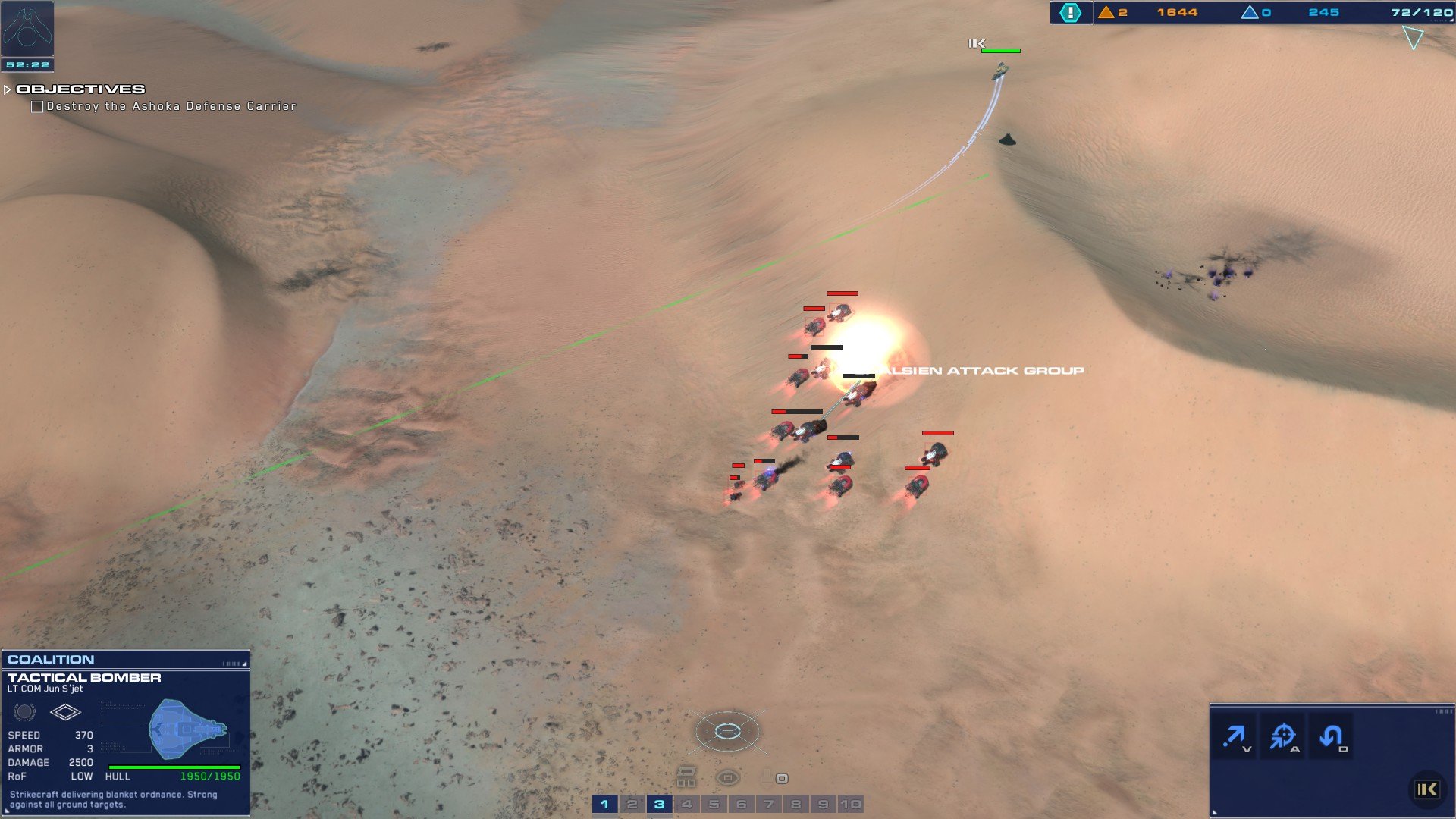 While the engine powering Deserts of Kharak is clearly a bit long in the tooth, the game looks surprisingly good when fully zoomed out thanks to the organic map design and visually striking desert landscapes. The cutscenes during story missions have an incredible art style that captures the mood of the Homeworld universe perfectly. The dated engine also means the game isn’t particularly demanding; if I turned Vsync off my frame rate would rocket well over 100 and stay there no matter how hectic the action became. I did experience one crash during a loading screen, which are a bit longer than they should be, but overall the game runs brilliantly.

The Homeworld games have always had fantastic audio design and music, and Deserts of Kharak continues this tradition. The original composer returns with another excellent offering of atmospheric, vaguely middle-eastern music that will surely make Homeworld veterans nostalgic. Sound design is nice and punchy with loud explosions and detailed gunfire from the dozens of units milling about on screen during battles. Voice acting is well done, be it during cutscenes or the radio chatter of units following orders.

It is a rare treat in this day and age to get a RTS campaign as narratively engaging and well designed as the one on offer from Deserts of Kharak. Despite the shift from space to the desert, the distinct atmosphere and feel of Homeworld is surprisingly well intact here, and the story fleshes out an intriguing aspect of the series' cannon. While it is a shame that more effort wasn’t put into the multiplayer and skirmish modes, especially in light of the surprisingly fun Artifact Retrieval mode, I still wouldn’t hesitate to recommend this refreshing RTS to anyone looking for a good tactical campaign or as an entry point into the excellent Homeworld series.

85
The game runs at a blazing frame rate though loading times are a bit long and I experienced one hard crash.
Overall
82
Homeworld: Deserts of Kharak offers up one of the best RTS campaigns in years alongside some great gameplay mechanics, though its multiplayer and skirmish offerings leave much to be desired. 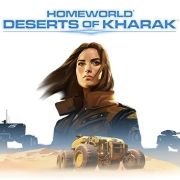 All videos for Homeworld: Deserts of Kharak (1)
Advertisement ▼